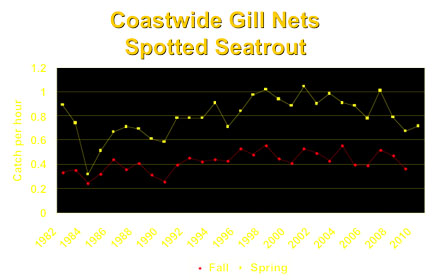 The spotted seatrout is the most highly sought of all saltwater species in Texas. No fish that swims in saltwater is held dearer in the heart of the majority of coastal anglers. The pursuit of seatrout in Texas generates by far the greatest slice of economic impact derived from recreational saltwater fishing. Red drum ranks second, but distantly. It should come as no surprise then, when fishing discussion turns to management and regulation of the state's seatrout fisheries, opinions abound and tempers can flair.

The management of seatrout in Texas began in 1978 when the first bag limit of 20 per day at 12 inches minimum length was established, although in Galveston Bay and part of San Antonio Bay, county government disputed state authority and the limits that applied elsewhere were not enforced there.

The next landmarks in regulation came in 1979 with the banning of monofilament gill nets and another measure in 1980 banned all types of gill nets in all state waters. In 1981 the Texas Legislature designated trout and reds as gamefish species, prohibiting commercial fishing and sale. In 1983 the Texas Legislature passed the Uniform Wildlife Conservation Act prohibiting county government override of TPWD regulations and all state waters came under the 20 fish-12 inch rule.

Texas' seatrout were dealt a cruel blow in December 1983 when Old Man Winter visited the coast. Hoping to jumpstart recovery of the fisheries, TPWD reduced the daily bag to 10 fish and upped the minimum size of keepers to 14 inches in 1984. But Old Man Winter visited again in 1989, twice in fact; February and December. TPWD's response came by way of increasing the minimum legal length to 15 inches, intending to allow young spawning seatrout the ability to make a full spawning season contribution before becoming eligible for harvest.

With signs that the fishery was beginning to again show the effect of over-harvest in some areas, seatrout regs were overhauled in 2003. Captains (guides) and crew (deckhands) were no longer allowed to retain a personal limit while fishing for hire. Additionally, anglers were limited to only one trout per day greater than 25 inches length. The basic 10 fish bag and 15 inch minimum remained. The most recent change to seatrout regulations, and the first-ever regional management plan, was enacted in the Lower Laguna Madre in 2007 with the limit cut to 5 fish per day 15 inches minimum length.

It is of great importance to note that this regulation chronology was begun in response to sportsmen demanding that something be done to eliminate commercial overfishing of the resource. The impact of fish-killing freezes had to be addressed, and finally because recreational harvest was cited as the cause of decline in the Lower Laguna Madre.

The decade of the 1990s was a golden era for seatrout. Coast wide, relative abundance increased nearly 50% while the population in some bays doubled and even tripled. Rec anglers enjoyed excellent catches and participation grew by leaps and bounds. Fishing efficiency increased too. A wave of technology brought more reliable boats that ran faster and shallower. The GPS unit became a common fixture on bay boats and cellular telephones enabled anglers to network on the water. The internet was becoming a source of fishing information. The quality of rods, reels, fishing line and lures made a quantum leap. The use of live, juvenile Atlantic croaker as bait for seatrout became hugely popular coast wide. Last but not least, Old Man Winter did not visit the Texas coast.

And so we entered the 21st century on a roll. Anglers were still enjoying excellent trout fishing coast wide. TPWD says saltwater license sales grew 25% during the years 2001-2006 and 1.2 million stamps were sold in 2008. Saltwater fishing guide services continued to spring up and guided fishing effort increased rapidly. Coastal communities that once had a handful of guides suddenly had scores, hundreds in some cases.

Now we're staring down the barrel of 2011. The bloom has been off middle coast trout fishing for several years. In San Antonio Bay, traditionally one of Texas' most productive estuaries, the trout population peaked in 1998 and has since declined by more than 50%. Population surveys indicate the fishery has fallen nearly to post-89 freeze levels. Neighboring West Matagorda and Aransas Bay have declined similarly, although West Matty showed a giant spike in the spring 2010 survey.

Down in the Lower Laguna, TPWD says anglers are catching bigger trout on average although the desired increase in relative abundance they expected has yet to register in the data. Still though, anglers are flocking to the Lower Laguna to cash in on the opportunity to land larger trout.

TPWD now wants to hear from us. Coastal Fisheries Division will conduct a series of scoping meetings in coastal communities and also in San Antonio in early January. In general coast wide terms, we are told, there is not yet cause for great alarm. However, TPWD says we definitely have some problems in the middle coast bays.

Anglers will have a chance to tell TPWD what they want from their fishery. Options include reducing bag limits to conserve the fishery and also increasing the minimum legal length to boost spawning biomass. Making no changes and continuing to monitor the situation is also an option. However, this would not guarantee the population will not continue to decline with marked periods of poor fishing dominating the trend.

Science and user expectation are the two largest components that drive fisheries management decisions. The "science" can be found on the accompanying slides. The public scoping process is designed to better understand how the general fishing public would like to see their fishery managed. I encourage all anglers to attend the meetings and participate in the discussions.