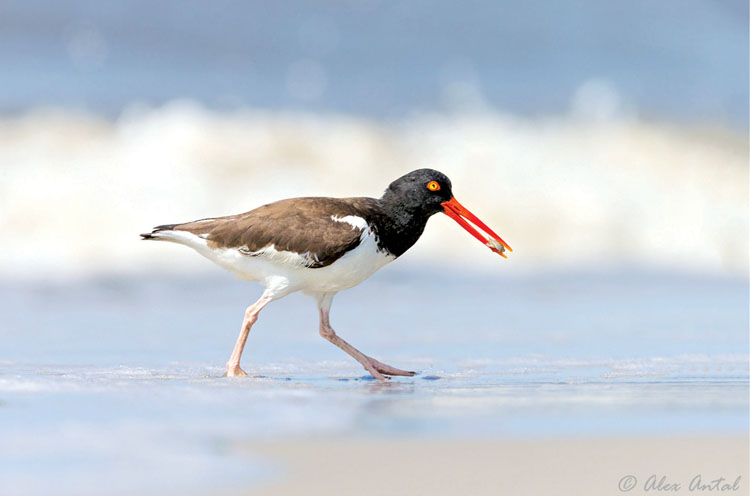 Photo by Alex Antal.
The American oystercatcher, Haematopus palliatus, is a large pied shorebird, easily identified by its long, straight, bright-red bill. Its yellow iris, distinct red eye ring, and long, pale-pink legs sharply contrast the deep-black head, brown and black backside, and white belly, making for a strikingly handsome visage. Adult plumage does not vary from female to male, though females tend to be larger than males (but there is considerable overlap in size; therefore, sexes are generally indistinguishable by sight in the field). Interestingly, their eye color darkens over time, which helps researchers age the birds. Adult oystercatchers average 18 inches in height with a 32-inch wingspan, characterized by a narrow white stripe, which can be seen in flight. This flashy bird was once known as the "sea pie," but it was renamed in 1731 when naturalist Mark Catesby observed the bird eating oysters. The genus name Haematopus is Greek for blood foot, and refers to the oystercatcher's pink legs. Palliatus is Latin for cloaked, and refers to the black "cloak" of feathers on its head.

There are no fossil records for this species. However, there are a few early records of importance from the North American Land Mammal Age, 4.5 to 5.2 million years ago, including Haematopus sulcatus, the oldest fossil species of oystercatcher, found in the Bone Valley Formation in Florida. Two races of the American oystercatcher are recognized, and breed in, North America: the eastern race and the western race. The eastern race, Haematopus palliatus palliatus, is found along the Atlantic Coast from Massachusetts to southern Florida, along the Gulf Coast from Florida to Mexico, in the Caribbean, and locally in Central America. The western race, Haematopus palliatus razari, is found from Baja California south to Argentina and Chile in South America. North of Baja California, the black oystercatcher takes over. The eastern race has been studied extensively across its range, during winter and breeding season, but the western race is poorly known. Also, the western race may hybridize with the black oystercatcher where their populations overlap.

True to its name, the American oystercatcher specializes in feeding on, almost exclusively, bivalves, such as oysters, clams, limpets, and mussels. Consequently, this species is completely restricted to marine habitats, bound by its prey specialization. If it must, it will also prey on other marine invertebrates, such as sea urchins, starfish, crabs, and worms. They typically forage during the day in shallow water, searching for food by sight. They walk across oyster reefs, clam flats, or other shellfish beds, and when they encounter one whose shell is partially open, they jab their bill into the shell and sever the bivalve's adductor muscle (the strong muscle that clamps the shell shut). Seems like easy pickins, but this technique is not without risk. Oystercatchers sometimes drown when a tightly rooted mussel snaps shut on the bill and holds the bird in place until the tide comes in. Though this danger doesn't seem to discourage the sneak attack method, they also use the safer, but slightly more time consuming method of carrying loose shellfish out of the water and hammering to break them open.

American oystercatchers have a distinctive piping call, which is especially evident during the breeding season. Courting birds tend to walk together and make a single piping note. Next comes a dance of sorts: bending over, extending and lowering the neck, and running side by side while calling. Eventually, the dance becomes an aerial performance, with the pair flying in tight formation around their territory. Individuals have been observed to choose the same mate for several consecutive years, and it is possible many mate for life. In areas with high populations, some may form trios, with one male and two females attending a single nest.

Nests are a shallow depression scraped out of the sand. Adults may make five or more of these before choosing a winner and lining it with shells, pebbles, and bits of debris to disguise the eggs. Oystercatchers commonly nest on dunes, dredge spoil islands, marsh islands, mudflats, etc. Suitable nest sites can be in short supply sometimes, especially when gulls hoard all the best digs, forcing oystercatchers to nest very close to the high-tide line. A breeding pair produces one to four buffy gray, speckled eggs. During the incubation period of 24-28 days, the pair is highly territorial and will fiercely defend the nest site. To mark their territory, an adult stands with its neck arched and bill pointed downwards, while emitting a series of (more) piping notes. They typically return to the same breeding territory, if not the same nest site, every year.

Although oystercatcher eggs are well camouflaged, they are still targeted by raccoons, coyotes, skunks, gulls, crows, rats, and foxes. If a clutch is destroyed, the pair usually lays a replacement clutch within two weeks, and can cycle through four or five restarts in a season if needed. Newly hatched chicks are active and coordinated and can run within hours of hatching, but it takes up to 60 days for their beaks to become strong enough to pry open bivalves. They achieve flight much sooner, about 35 days, so the parents have to feed their chicks well after fledging. Juvenile oystercatchers have varying degrees of dusty orange to gray on the bill and a speckled brown head and back to camouflage against the pebbly beaches. They frequently dive to escape predators (adults rarely so). They propel themselves underwater using wings and are able to dive several feet deep and can swim underwater for at least 11 yards. They reach reproductive maturity at 3-4 years of age and can live over 10 years in the wild. Fun fact: a flock of oystercatchers is called a "parcel."

Although the American oystercatcher is now a relatively common shorebird, it was once highly threatened and rare. During the eighteenth and nineteenth centuries, American oystercatchers were hunted for their conspicuous plumage and their eggs were collected for food. These threats were exacerbated by a rapidly increasing encroachment in coastal areas. However, following the Migratory Bird Treaty Act in 1918, which afforded the species protection from these threats, its population started to recover. Today, the most significant threat is habitat loss. Coastal developments increasingly reduce the amount of nesting and foraging habitat and often negatively affect nearby habitats through pollution and sedimentation. In addition, since this species (along with many others) occupies low-lying coastal areas for nesting, foraging, and roosting, it is particularly vulnerable to rising sea levels caused by global climate change. One benefit of human activity has been the appearance of islands made from dredging spoils. These are often isolated from mammalian predators and fairly high above the water, creating safe nesting habitat.

Though the IUCN Red List classifies this species as being of Least Concern, the U.S. Shorebird Conservation Plan lists American oystercatchers as a species of High Concern, citing a small overall population (about 11,000 individuals) and widespread habitat loss. In 2015, Gulf Coast Bird Observatory began a citizen science project (coordinated by Dr. Susan Heath, a GCBO avian conservation biologist) with Audubon Texas monitoring nesting oystercatchers on the Texas coast. Volunteers monitor their pair(s) at least once a week. Reported/collected data includes adult pairings, nest success or failure, and other information. Texas oystercatchers are banded with two identical maroon color bands with a two-digit code in white, above the leg joint, and a single metal band on the lower right leg. More information on these types of programs is available on the Audubon TERN website.

To stand at the edge of the sea, to sense the ebb and flow of the tides, to feel the breath of a mist moving over a great salt marsh, to watch the flight of shore birds that have swept up and down the surf lines of the continents for untold thousands of years, to see the running of the old eels and the young shad to the sea, is to have knowledge of things that are as nearly eternal as any earthly life can be."

Where I learned about American oystercatchers, and you can too!