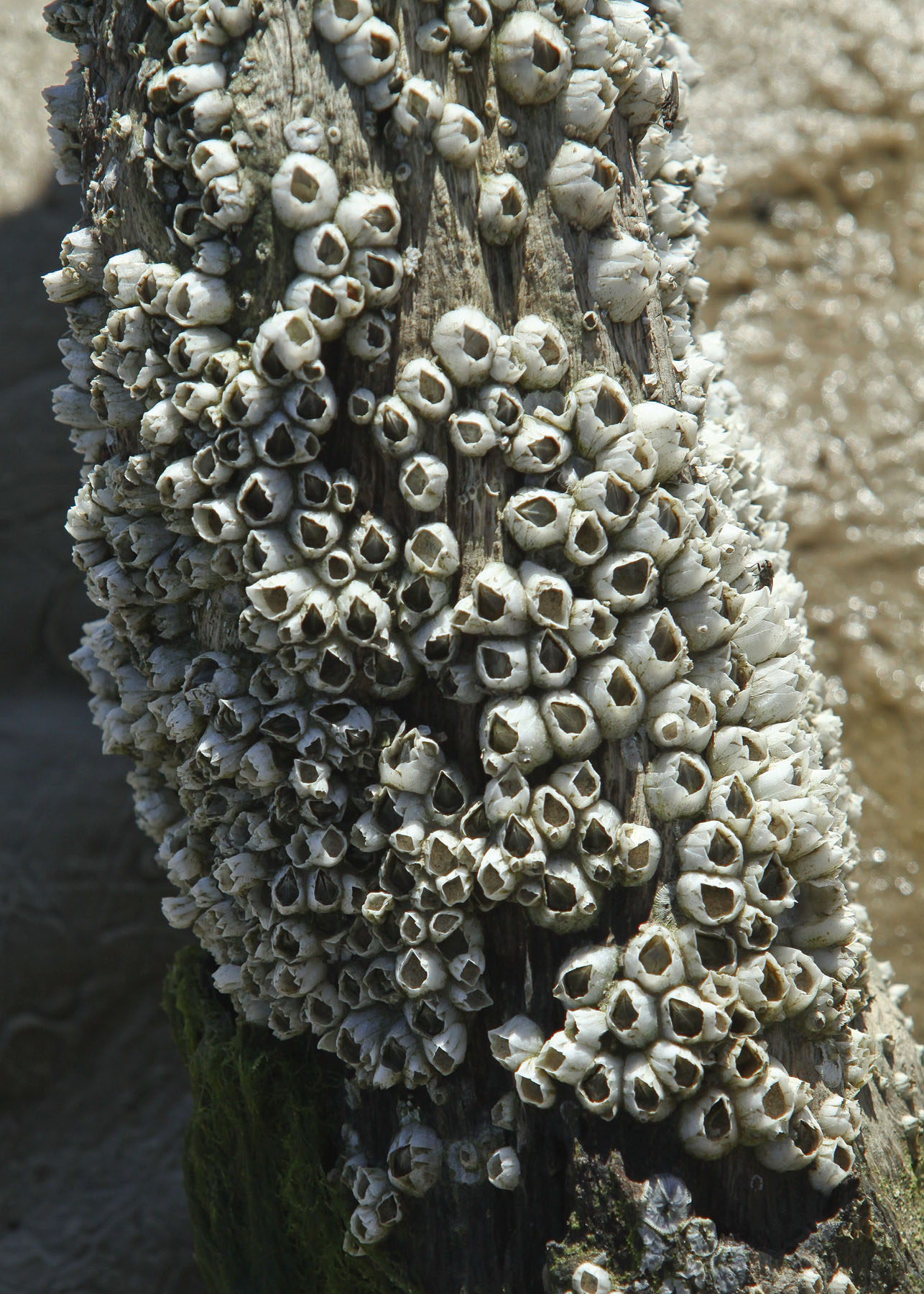 Acorn barnacles in Aransas County. Photo by Daniel Feeser.
"I hate a barnacle as no man ever did before."
~Charles Darwin

Imagine spending all your adult life standing on your head and eating with your feet! Sound challenging? Welcome to the world of barnacles. Of all the sea life visible to the naked eye, barnacles are among the most abundant and the most overlooked. They gradually build up on almost any submerged object, briny footprints of the sea.

The word "barnacle" originally referred to a species of waterfowl, now clarified as the barnacle goose. The connection might not be apparent nowadays, but in the 13th century, it was widely believed that some animals were born spontaneously from particular substances (maggots from rotting meat, for example). Wood that spent any time in the ocean would often be covered in barnacles, so people assumed they were born of the wood; barnacles have feathery feet tucked inside their shells, reminiscent of actual feathers. Well, the barnacle goose breeds in the Arctic. Since no one back then ever witnessed the goose breeding, and since these barnacles seemed to have baby birds inside them you see the connection. Monks of that era even claimed that the barnacle goose was simply an adult barnacle and argued that, being a fish, the barnacle goose could be eaten during Lent. It would be a good 300 years before the term would be used to refer to what we know now as barnacles.

While they may look like mollusks with their hard outer shell, barnacles are actually crustaceans, related to lobsters, crabs, and shrimp. The taxonomy of the barnacle family, in addition to classifying them in the phylum Arthropoda ("jointed foot") also puts them in the class Crustacea and the order Cirripedia, which roughly translates into slender, wispy feet (like cirrus clouds). Cirripedia is the only group of sessile crustaceans. There are more than 1,000 known species spread out in virtually all marine habitats, on all levels of the shore, often in vast numbers. Though some have evolved as parasitic forms, unrecognizable as crustaceans except for their larval stages, most have a typical marine life cycle, making them model study organisms. Consequently, we know a lot about barnacle biology.

As with all crustaceans, a barnacle's body is encased by a hard exoskeleton made of chitin. What distinguishes this group from other crustaceans, however, is their outer calcareous shell, which they secrete as adults. This shell is composed of six neatly fitted plates that form a circle around the barnacle's body. Four more plates make up a "door," which the barnacle opens and closes, mostly depending on the tide. Most barnacles are free-living filter feeders. Since the legs no longer have any locomotive purpose, they have evolved into jointed, feathery, net-like structures, collectively called a cirral net. When under water, this net sifts out plankton for the barnacle to eat, and as barnacles have no gills, the legs are also in charge of gas exchange.

Barnacles can grow rapidly in size, but how they enlarge the inside of their shell is a mystery. It's supposed that they secrete a chemical that simultaneously dissolves the inside and builds up the outside. Barnacle cement, the substance they use to glue themselves in place, is one of the strongest known natural adhesives. It is stronger even than epoxy cement and does not readily dissolve. If man could learn to synthesize this cement, which barnacles have been producing for millions of years, it could be used to mend bones and hold fillings in teeth.

The two most common types of barnacle are gooseneck barnacles and acorn barnacles, named for their shapes. Gooseneck barnacles have a muscular, flexible stalk for attaching themselves to substrate; this type tends to settle on free floating structures, such as buoys and ropes. Acorn barnacles have no stalk and attach themselves directly onto a surface; this type tends to settle on fixed structures. The majority of barnacles fall into one of these two types of sessile, commensalistic filter feeders. There are a few, however, harboring unique quirks and lifestyles.

Not content using random floating junk, "buoy" barnacles secrete a buoyant foam-like cement puff, cruising the sea surface like a Portuguese man o' war. And just as the man o' war is a communal raft of organisms, buoy barnacles will sometimes band together, becoming a settlement area for yet other species of barnacles. Just when you thought escape from the relatives was imminent

Next up: boring barnacles (as in tunneling, usually through flesh). These barnacles are extremely tiny and have given up the hard outer shell of their cousins to, instead, burrow into snails, clams, or even other barnacle species and live parasitically.

Speaking of parasitic, there's a wonderfully invasive superorder within the barnacles, the Rhizocephalans ("root heads"). It's not unusual for barnacles to settle on other living creatures (whales, turtles, manatees, etc), and we've already talked about barnacles that settle inside other creatures, but these barnacles not only settle inside another creature (specifically, a living crab), they manipulate their host's behavior. Once the pre-adult female Rhizocephalan locates a suitable host, she injects a tiny clump of her own cells through the crab's armor and discards the entire leftover portion of her body. From here, she grows like a cancer throughout the crab's interior, wrapping fungus-like tendrils around organs, muscles, even eyes. When the parasitism is complete, the Rhizocephalan appears to the outside as a bulging sac located where the host crab would normally carry an egg cluster. What if the host crab is male? No problem, the parasite simply alters her host's hormones until the crab is shaped, and acts, like an egg-carrying female. After fertilization, the female barnacle releases all parental duties to her host crab; the crab will spend the rest of its life rearing the offspring of its parasitic invader over and over and over never reproducing any of its own species.

Now, if you're having trouble relating to the crab, how about one of your vertebrate cousins: the shark. The barnacle Anelasma squalicola looks like a goose barnacle, but it has no feathery feeding legs and buries its thick stem inside the shark's back, drawing nutrients through a network of filamentary "roots." A. squalicola is one of the few parasites on Earth to castrate a vertebrate, just like Rhizocephalan does to the crab. The entire reproductive developmental system is inhibited by this life-draining hitchhiker.

The rest of the barnacle family, those non-parasitic filter feeders, strain minute planktonic organisms and particles of detritus out of the tides. Despite their peaceful existence (or perhaps because of it), these barnacles are preyed upon by myriad predators including sea stars, flatworms, predatory snails, fish such as sheepsheads, and even shore birds. The barnacles aren't completely defenseless, though. Most predatory snails, such as our own lightning whelk, attack barnacles by drilling through the barnacle's shell. This can take several hours, the amount of time required increasing with the size of the barnacle. Beyond a certain size, the snail would require so much time that it would have to drill through low tide. Since being out of the water too long is dangerous to the snail, they usually don't attack barnacles beyond a certain size. Thus, the barnacle's defense is to grow rapidly and reach this formidable size. Some species can reach a whopping seven centimeters in diameter! (And a few even larger.) They can live three to ten years on average, though some larger species are known to be much older.

Like all crustaceans, barnacles begin their lives as microscopic plankton. The first stage, characterized by a single eye, is called the nauplius and is a form shared by virtually all crustaceans at some point in their development. This stage is the start of the mobile and dispersing larval period (they start their life at the college level, apparently). While in this stage, the larva feed voraciously and build up their fat reserves because during their next stage of life, there's no dining out. Following the nauplius stage is the cyprid stage. During this stage, the larvae is enclosed in a clam-like set of hinged shells, and it exists only to seek out a resting place: a rock, a seashell, a whale really anything solid will do. They pull themselves along by the adhesive tips of their antennae. It may takes days to find a suitable spot, letting the currents carry them from one possibility to the next. Because adults are sessile, choosing the spot it will reside in for the rest of its life is very critical. To make this life-settling decision, cyprids use both chemo- and nuero-receptors to detect environmental cues and distinguish good settlement sites from bad. One good cue is the presence of other individuals of the same species; if a site already has barnacles, then survivorship and mating opportunities are probably good. Some other cues that seem to influence settling cyprids are bacterial films, surface textures, and the presence of predators. Once a suitable location is found, the cyprid secures itself head-first to the surface with a brown glue so strong that the barnacle's cone base is left behind long after the creature has died. On the outside, the barnacle will quickly grow into the armored fortress we spend hours scraping off the boat, but on the inside, it still follows a shrimp-like body plan. It won't be long before a newly settled barnacle will be ready to make little nauplii of its own.
Stay tuned for the stunning sessile conclusion next month!