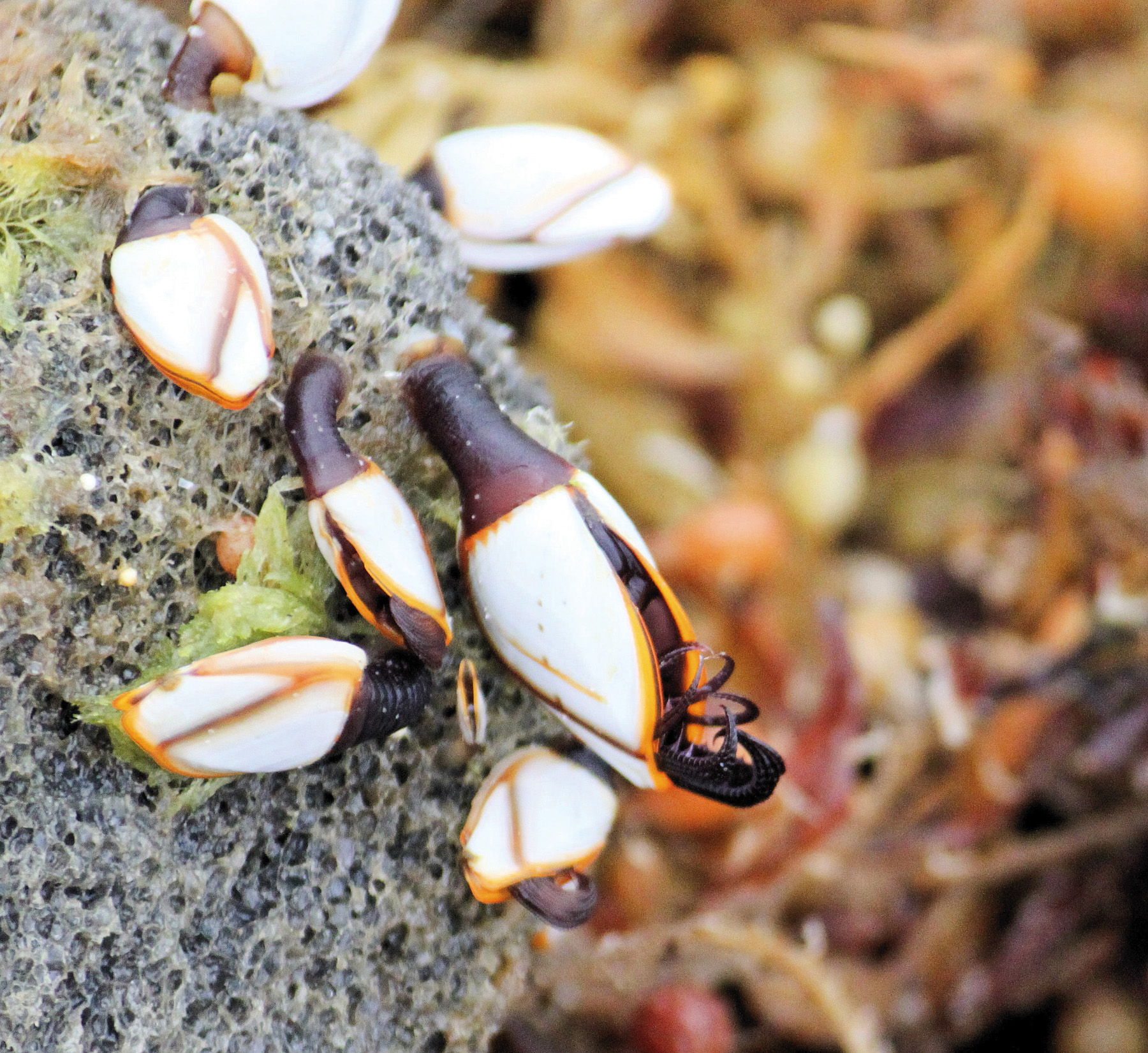 Goose barnacles on Mustange Island. Photo by Karen Morris.
When last we left our barnacle buddies, they were ready to start propagating the oceans with their progeny. However, it can be hard to find that special someone when you're glued to a rock. Some sessile organisms, such as corals and sponges, solve this problem by pumping sperm and eggs into the water. Some just clone themselves. But barnacles are arthropods; they're more sophisticated creatures, more complex than a coral polyp. By that, I mean they have a penis, and since they can't walk around, they have a really long, stretchable penis. In fact, barnacles have the longest penis, relative to body size, of any animal.

*Fun Fact barnacles on wave-exposed shores grow thicker penises, not necessarily longer than those that live in protected areas, just thicker. This is most likely an environmental response to the water action. Thicker penises are less likely to break in the wave action and more likely to produce successful mating. However, these barnacles aren't the genetic result of generations of barnacles evolving to live in rough water. Regardless of the type of penis its parents had, a barnacle living in choppy waters will develop a thick penis. (The motion of the ocean makes so much more sense now.)

Most barnacles are hermaphrodites, meaning they have both male and female sex organs. Although it's possible for barnacles to self-fertilize, it seems to be very rare. Prior to mating, a barnacle acting on its male personality polls the reproductive state of its immediate neighbors by tapping nearby barnacles with its elongated penis. If eggs are present, insemination occurs. After mating season ends, the penis is discarded; a new one will develop next year.

Not all barnacles are hermaphrodites. Some goose barnacle species have two distinct sexes, though the adult males may be little more than tiny tubes of sperm attached to the females. Parasitic and boring barnacles are also either male or female.

So what happens to a barnacle not stationed near any of its own species? Luckily, there's a backup plan: spermcasting. Other sessile organisms, such as sponges, corals, and some mollusks, employ this strategy of capturing sperm released into the sea, but barnacles are the first crustaceans known to do this. It differs from broadcast spawning in that only sperm is released into the water, not eggs. Spermcasting goes nicely with a sessile existence and filter feeding. As filter feeders, barnacles already possess the equipment to strain small particles out of the water.

Solitary barnacles aren't a common problem. Too many in one place is more likely. Since one of the settling cues is the presence of one's own species and because living together can reduce the risks of desiccation, many individuals may be drawn to a single site, resulting in severe crowding. Sometimes, this results in a hummock, an area where barnacles are so densely packed that the group has developed into a dome-like, mounded shape. Typically, barnacles grow by increasing in diameter, but when they are surrounded, they have nowhere to grow but up, which causes a cylindrical shape instead of the classic cone morphology. Those that grow fastest also grow tallest and are surrounded by slower-growing, shorter individuals. Although the fast-growing individuals are taller and have access to more nutrients in the water, their area of attachment is quite small. Additionally, because they are so crowded, their shells tend to be thinner and more fragile. Thus, hummocks are inherently unstable; the loss of just a few barnacles can result in large swaths becoming detached, a problem any boat owner with barnacled hulls would love to have.

Barnacles may look nice and nautical, but on the hull of a ship, they increase friction and reduce the vessel's speed, causing it to burn more fuel and emit more emissions just to maintain its cruising speed. A six-month growth of barnacles can result in having to burn forty to forty-five percent more fuel. To prevent barnacles from settling on ships, the hulls are usually treated with copper-containing paint. The paint forms a toxic film that deters cyprids. The leaching poison repels the would-be hitchhikers, but it also enters the marine ecosystem. However, various alternatives are cropping up to replace the toxic paints. A post-grad student from Sweden's University of Gothenburg mixed an antiparasitic agent, called ivermectin, with regular hull paint. Unlike copper, very little of the antiparasitic leaves the paint; barnacles come into contact with it only when they try to penetrate the hull's surface. Just 0.1 percent of ivermectin is sufficient to render a paint barnacle-proof and lasts many years. Another formula, developed at the University of Pisa, uses polymer molecules that are water-attracting on one side and water-repellent on the other. The checkerboard pattern that emerges on the painted surface confuses barnacles and mussels, making it harder for them to attach. If checkerboarding doesn't work out, there's yet another plan: create a surface so smooth that barnacles slip right off. This is achieved with fluoropolymer, a chemical similar to Teflon. The paint doesn't discourage attachment, but once the vessel is traveling faster than ten knots, the water sweeps the barnacles off. For smaller boats, researchers from the University of North Texas and the University of Texas are experimenting, collaboratively, with a mixture containing the active ingredient of hot peppers and the active ingredient of cannabis. This concoction seems to be particularly effective against invasive freshwater mussels but could have some import on barnacle matters. Either way, there's a lot of good coming out of this field of research. Reducing encrustations will save fuel, which saves money, and will also cut down on greenhouse gas emissions. Stopping the spread of invasive mussels is a bonus, making life easier for boaters in the fresh waterways of America and Canada.

Of the over 1,000 species of barnacles worldwide, about seven percent (90ish species) occur in the Gulf of Mexico, not all of them native. The Gulf species are a mixture of goose barnacles, acorn barnacles, Rhizocephalans, and boring barnacles. Chthamalus fragilis, the fragile barnacle, is the most common acorn barnacle at the higher tidal levels of the Texas coast. It's small, usually about five millimeters, but its size and shape can vary greatly depending on food supply and crowding. Three other acorn barnacles are also quite common: Balanus improvisus (the bay barnacle), Balanus eburneus (the ivory barnacle), and Balanus amphitrite (the striped barnacle). Acorn barnacles are classified by their shell structure. Balanus species of the northwestern Gulf have calcareous, porous shells. Chthamalus's shell is membranous, but its shell wall is calcareous and solid. The ivory barnacle is the largest acorn barnacle in this area. It can be distinguished by longitudinal grooves on the shell plates forming the door, and the broad zone of overlap between plates. The striped barnacle also has a broad overlap but lacks the grooves (and has thin gray or purple stripes). The bay barnacle has a narrow overlap and no grooves.

The highest density of barnacles along the coast occurs in nearshore waters and on structures on the continental shelf. The upper limit depends on how tolerant the barnacle is of drying out. A barnacle can stay out of water for some time by closing its door tightly to keep water from leaking out. However, if the barnacle is not rehydrated by the returning tide, or at least by spray, for a longer time, it may die. A lower limit may be created by crowding or predation. Barnacles that are more resistant to drying out than their predators may occupy a higher tidal area.

There are almost certainly more barnacles in the Gulf than those already documented, probably in the deeper waters of the basin or around oil seeps, methane hydrates, brine seeps, etc. Some are likely to extend their range in the future, and more invasive species will certainly hitchhike their way in. Darwin commented in 1851 that barnacles "abound so under every zone, all over the world, that the present period will hereafter apparently have as good a claim to be called the age of Cirripedes as the Palaeozoic period has to be called the age of Trilobites."


Where I learned about barnacles, and you can too!