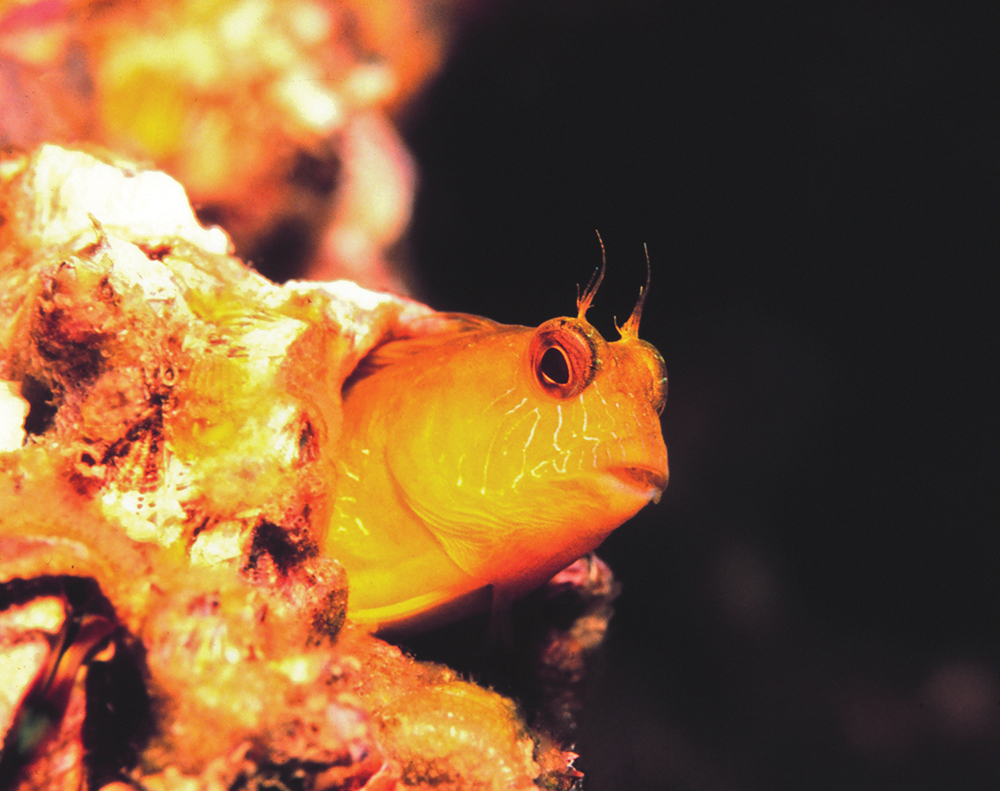 As a group, blennies are remarkably varied, especially since the term has been applied to several families of fish sharing similar morphology and behavior, such as the goby and dragonet families. But the true blennies form their own taxonomical suborder, Blennioidei, comprised of six families containing around 833 separate blenny species in 130 genera. All of these blennioids share a few basic characteristics. They are mainly marine, though there are a few brackish and freshwater species. Most lack swim bladders, or have very small ones, and are therefore, unsurprisingly, bottom dwellers. The eyes and mouth are relatively large. They usually bear distinctive cirri — wispy antenna or whisker-like appendages — on their heads. They are generally small with elongated bodies, some almost eel-like. Their dorsal fins are often continuous and long. The pelvic fins typically have a single embedded spine. The tail fin is rounded. Blennies are known for their distinctive teeth, which are close-set in a single row on each jaw, or “comb-toothed.” Some have a huge canine on each lower jaw, earning the descriptor “saber-toothed." Most species lack scales.

Three species can be found in Texas bays: the crested blenny, Hypleurochilus geminatus, the freckled blenny, Hypsoblennius ionthas, and the stretchjaw blenny, Chasmodes longimaxilla. The crested and freckled blennies prefer hard substrate, such as oyster beds, coral reefs, or rocks, and can be found all along the coast from the Carolinas to Texas. The stretchjaw blenny is less picky and will hang out just about anywhere in the bays – oyster beds, seagrass meadows, muddy bottoms, mangroves, etc., and is found only along the coast from Pensacola, FL, to southern Texas.

All three species are in the combtooth blenny family, Blenniidae. The body plan of combtooth blennies is typical among blennioids. They have blunt heads and large, googly eyes on top of the head. Their continuous dorsal fins have three to seventeen spines, and their small, slender pelvic fins are situated before the enlarged pectoral fins. Their bodies are compressed, elongated, and scaleless. As their name would suggest, combtooth blennies are noted for the comb-like teeth lining their jaws. Crested blennies grow up to four inches in length and are dark brown with many small, faint, irregular orange spots and bars on the body, and a dark spot at the front of the dorsal fin. Males sport a large, arched fold of skin on each side of the neck. In addition to the comb-like teeth, crested blennies often have a large curved canine-like tooth at the rear on each side of lower jaw and sometimes the upper jaw. Freckled blennies also grow up to four inches in length. They are yellowish-brown on top and whitish underneath with several dark saddle bars, two dark bars from eye to mouth, and a dark crescent bar with a black front edge above the gills. The feather-like cirri above the eyes are generally much longer in males. Color patterns also differ between the sexes. Females have small dark freckles covering the snout, lips, bottom half of the head, and sometimes their mid-body. In males, the freckles are either indistinct or absent. Although classified as a combtooth, freckled blennies have small, chisel-like teeth. Stretchjaw blennies only reach about three inches in length and are olive to greenish with light stripes and mottling, an iridescent blue spot towards the front of the dorsal fin, an orange streak along the dorsal fin, and oddly, no cirri on the forehead.

Although many blennies are detritivorous, meaning they eat dead plant and animal matter, some species are herbivorous, feeding on algae and such, and others are partially to wholly carnivorous, eating small invertebrates, or even stealing bites of fin, scales, or skin of other fish. Crested blennies use their fine and flexible teeth to pick invertebrates from the substrate. They mainly prey on benthic crustaceans, mollusks, worms, and microalgae. Freckled blennies are herbivorous, using their short chisel-like teeth to scrape algae and detritus from surfaces. Herbivorous blennies, such as the freckled blenny, play an important role in grazing reef algae, keeping it from smothering corals. Stretchjaws eat detritus and other bony fishes. Being so small, blennies are often on the menu for other creatures. They rely on a secretive lifestyle to survive, camouflaging with their surroundings and hiding on the bottom in shallow waters. Many are reclusive and may burrow in sandy substrates or inhabit crevices in reefs, empty mollusk shells, or even old beer bottles. Despite that, they can be territorial, and will even sometimes harass divers that are too close to their home.

Blennies are most likely to be territorial during spawning season, which occurs from early spring through September. Many blennies develop brighter coloration during spawning, especially under the jaw (most frequently the male, but sometimes the female as well). Males attract mates near holes, crevices, or even empty oyster shells where spawning occurs. When a female enters the area, the male engages in courtship behavior that can include changing into spawning colors, bobbing the head up and down, and leading the female to the nest with…suggestive swimming. If the female is impressed, she proceeds into the crevice (or hole, or oyster shell) and begins to lay round, amber-colored eggs. The eggs are adhesive, and are attached to the substrate via a filamentous, sticky pad or pedestal. Spawning may last few minutes, or a few days depending on whether the female deposits the eggs all at once, or on several trips into the nest. One male may mate with several females. The male is generally in charge of deterring predators during spawning and guarding the eggs until hatching, though females may occasionally assist with guarding the nest as well. Once hatched, the larvae are on their own. Blennies generally pass through a pelagic stage after a short planktonic stage. The young pelagic fishes look different enough from their adult form that they were once classified as a separate subfamily. Larvae settle at the size of just under half an inch, and sexual maturity occurs at a length of about 3/4 of an inch.

Blennies are not food fishes (except for the giant blenny from the eastern Pacific, which is used in a soup that reportedly produces a slight intoxication of short duration), but many species are gathered for aquarium use. They are considered to have entertaining personalities and are easy to care for. Though blennies are harvested from the wild for the aquarium trade and are subject to habitat degradation, all three found in Texas bays are classified as Least Concern by the IUCN Red List.

And everywhere, just as there were animals on land, were the animals of the sea.
The tiniest fish made the largest schools- herring, anchovies, and baby mackerel sparkling and cavorting in the light like a million diamonds. They twirled into whirlpools and flowed over the sandy floor like one large, unlikely animal.
Slightly larger fish came in a rainbow, red and yellow and blue and orange and purple and green and particolored like clowns: dragonets and blennies and gobies and combers.
Hake, shad, char, whiting, cod, flounder, and mullet made the solid middle class.
The biggest loners, groupers and oarfish and dogfish and the major sharks and tuna that all grew to a large, ripe old age did so because they had figured out how to avoid human boats, nets, lines, and bait. The black-eyed predators were well aware they were top of the food chain only down deep, and somewhere beyond the surface there were things even more hungry and frightening than they.
~ Liz Braswell, Part of Your World: A Twisted Tale

Where I learned about blennies, and you can too!