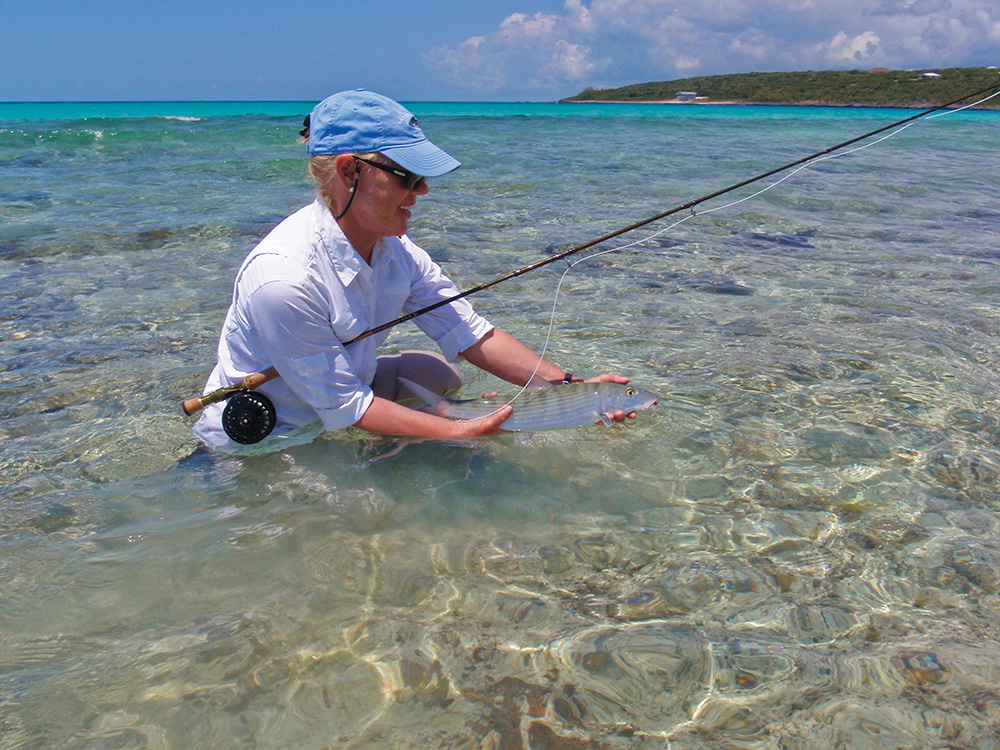 The finest gift you can give to any fisherman is to put a good fish back - and who knows if the fish that you caught isn’t someone else’s gift to you?
~ Lee Wulff

Once you land a fish, there’s a decision to make – keep or release? In many cases, the decision is made for you by state or federal regulations. In others, maybe the fish is too big to fit in your cooler, or you want to return a magnificent trophy to the water so that you, or some other lucky angler, will have a chance to catch it again. Whatever your reasons, you want to give your fish the best possible chance of survival. After all, if the released fish dies from mishandling, then it defeats the purpose of releasing in the first place. Death after, and due to, release is called cryptic mortality. Researchers have studied methods of hooking, landing, reeling in, and releasing all over the world to determine which are most likely to result in a successful release (i.e., a healthy fish that can go on to reproduce). Here are some (but not all!) of the things to watch out for.

Lactic acid is a byproduct of anaerobic metabolism, meaning that when muscles run low on (or out of) oxygen, they begin to produce lactic acid. This is a normal biological process during strenuous physical activity, and under normal circumstances, the lactic acid dissipates with no lasting damage. It affects fish just as it would affect any other animal, by making it tired, and consequently more susceptible to predation. The longer a fish fights on the line, the longer it will take to recover. However, a fish can fight for so long that the buildup of lactic acid becomes non-reversible and causes blood acidification (called acidosis), which be fatal up to 72 hours after the release. This is often a result of using tackle that is too light for the species and playing the fish to exhaustion. Reasonable tackle selection and quick landings should mostly alleviate this particular danger. Pay attention to water temperatures as well. Know how hot is too hot for your target species. Fish that are already stressed by warm water temperatures or low dissolved oxygen conditions will tire and build up lactic acid much more rapidly.

You probably already know that using dry hands or gloves to grab your fish can remove their layer of slime, but what is that slime and why does it matter? Well, it’s mucus – pretty much the same mucus that you and I secrete in our nose, lungs, bowels, etc. Mucus contains mucins, a type of glycoprotein (a protein with an attached carbohydrate). Mucins are created by goblet cells in the animal’s skin and rapidly form a gel when they leave the goblet cells and contact water. They are responsible for both the viscous and elastic properties of mucus (aka the ‘slime’ factor). However, fish mucus contains substances other than just mucins and water, such as enzymes, antibodies, and electrolytes. Fish that live around coral reefs even have chemicals that block ultraviolet light. Since fish mucus has multiple functions, removing it can be detrimental in several ways.

Firstly, it provides a physical barrier against pathogens, fungi, bacteria, and ectoparasites. When the old mucus layer is shed and replaced by new mucus, the trapped invaders are also lost. Antibodies, antimicrobial peptides, and enzymes in the mucus also actively attack pathogens to prevent infection. Any open wounds are aided in healing by the medicinal properties of the mucus. These properties are so effective, in fact, that medical researchers are working to isolate the active ingredients for human application (not that you should smear fish slime on your cuts; remember that it also contains all those trapped pathogens). Not surprisingly, fish with poorly developed scales are often more slimy. Rubbing off this mucus layer makes the fish more susceptible to infection and parasitation.

Secondly, in conjunction with the scales, the mucus layer partially blocks the movement of water into and out of the fish’s body. This helps maintain the salt balance inside the fish. Salts in the body, or the ions they break down to in water, are sometimes also referred to as electrolytes or minerals. They can be dangerous if they become too concentrated. The mucus acts like an osmoregulatory filter – and not just for salts but for the gases involved in cutaneous respiration as well, which represents a small to moderate percentage of gas exchange.

Thirdly, mucus fills in any gaps or irregularities between scales, reducing friction. Especially in speedy fishes, the drag resulting from small spaces between scales and projecting body parts can account for considerable energy loss in movement. The mucus smooths out these gaps. Finally, there’s mucus benefits particular to specific species, like the toxins produced by boxfish mucus, or how the fry of some cichlid species feed off their parents’ mucus layers. So next time you get slimed while grabbing a fish, just enjoy the moment and consider the slime’s value to its producer. A dry fish makes a bad photo!

Fish have evolved essentially in a weightless environment, nearly free of friction. Due to these conditions, their bodies are not designed for the gravity of an open-air habitat. The surrounding water supports their bodies and internal organs. Removing that support can have harmful effects if handled incorrectly. Improper holding techniques are well substantiated by studies of multiple fish species around the world. Holding a large fish vertically by the jaw likely condemns it to death. The spine cannot support the fish at that angle out of the water, and holding one like that can cause the vertebrae to separate. Internal organs are also at risk of shifting downward into the stomach cavity and potentially tearing. Additionally, the ligamentous structures and joint capsule of the jaw often can’t tolerate the pressure. A fish that appears to be healthy and vigorous can still die of starvation if the damage to the jaw is significant enough to interfere with feeding.

Important to note that these are concerns for larger fish. A three-pound trout is not going to suffer the damage a trophy would, and it’s probably fine to hold them vertically by the jaw for a short time. For the big catches, use a landing net, preferably made of rubber or soft, knotless mesh – removes less slime (stay away from nylon nets, especially the knotted ones). In general, grab the wrist of the tail, then cradle the body (usually underneath the pectoral fins). Avoid squeezing too hard; your grip strength is stronger than their belly. Plus, squeezing a slippery bar of soap doesn’t make it easier to hang on to. Lastly, consider the gills an internal organ. Don’t hoist a fish you’re planning to release by the gill plate. Gills are particularly fragile and damaging those sensitive tissues risks hemorrhaging.

How long can you hold your breath? Don’t guess – try it. Time it. One minute? Two? Fish don’t have the same breathing structures we do, so it’s not a direct analogy, but it’s a fair assumption that if you feel uncomfortable from lack of breath, odds are, the fish does also. Each second you keep a fish out of water decreases its chance of survival. In a study by Queen’s University (Ontario), rainbow trout that were exhaustively exercised and not exposed to air survived at an 88% rate. However, the rate of survival for fish exposed to air for thirty seconds was only 62%, and those that were held out of the water for sixty seconds had a mere 28% chance of living to fight another day. The researchers attributed the higher mortality to a significant reduction of oxygen content in the fish’s blood. For comparison, that’s like sprinting for half an hour, then submerging yourself in water for a minute. You’d probably survive, but maybe not without some damage. This doesn't mean you can’t have a grip-and-grin shot. Just use common sense and be aware of the physical condition of your catch.

Once you have not over-exhausted, de-slimed, dangled, or suffocated your fish (congratulations!), you get to release it. If it is disinclined to swim away immediately, manually moving the fish forward through the water forces water through the mouth and gills, helping the fish revive. Never move the fish backwards though, as that motion can damage the gills. If a current is available, facing the fish into the current provides the same movement of water through the gills. When possible, revive your catch in clean, moving water rather than the water just muddied up by feet. (How would you like to recover from your run in the smoking lounge of an airport?)

Fish caught in deep waters sometimes need more specialized treatment. When a fish is pulled up to the surface from deep water, gases dissolved in the blood come out of solution and cause the swim bladder to expand. The stress and physical damage that results is called barotrauma. A fish can often survive this event if it’s treated and released properly. There are primarily two procedures to accomplish this: recompression and venting. Recompression involves returning a fish safely to the depths via weights so the increasing pressure recompresses the gasses in the expanded bladder. A variety of tools are available, including descender devices, release weights & baskets, etc. You can even make your own with a milk crate and weights. Venting involves puncturing the air bladder with a hollow needle. Inexperienced venters may be tempted to puncture what they think is the air bladder protruding from the mouth. This is the stomach, and puncturing it will kill the fish. Use established guidelines (or better yet, someone with experience) if attempting this procedure. In the not-so-distant past, anglers nine miles off the coast were required to have a venting tool on the boat. When federal guidelines changed in 2013, no longer requiring the tool, it wasn’t because venting doesn’t work but that other means could be used besides a venting tool. Venting can be controversial, and though it can be done effectively, scientists at the Harte Research Institute for Gulf of Mexico say recompression tools are a better option.

The Institute’s Center for Sportfish Science and Conservation has also launched a program called ReleaSense, a platform for anglers, industry, and resource managers to share information regarding the best catch and release practices for many prized sportfish species. Research shows that different species may not have identical responses to factors such as hooking location, fight time, and handling method. ReleaSense provides a continually expanding series of catch and release instructional videos, as well as interviews with leaders in the recreational fishing industry, fisheries managers, and expert anglers from across North America. Increasing awareness of these practices can improve survival rates of released fish, ensuring healthy and sustainable populations of harvestable fish for the future. This is a potentially powerful initiative because anglers are the backbone of fisheries conservation. Their actions can directly affect many fisheries.

So should you always catch and release? Not necessarily. Fishing for your dinner is perfectly acceptable as long as you fish within federal and state limits. “Limiting your kill” rather than “killing your limit” ensures that some little girl or boy a hundred years from now gets to feel a tug on the end of their line.

Beginners may ask why one fishes if he is to release his catch. They fail to see that the live trout, sucking in the fly and fighting the rod, is the entire point to our sport. Dead trout are just so much lifeless meat.
~ Ernest G. Schwiebert, Jr

Where I learned about catch and release, and you can too!