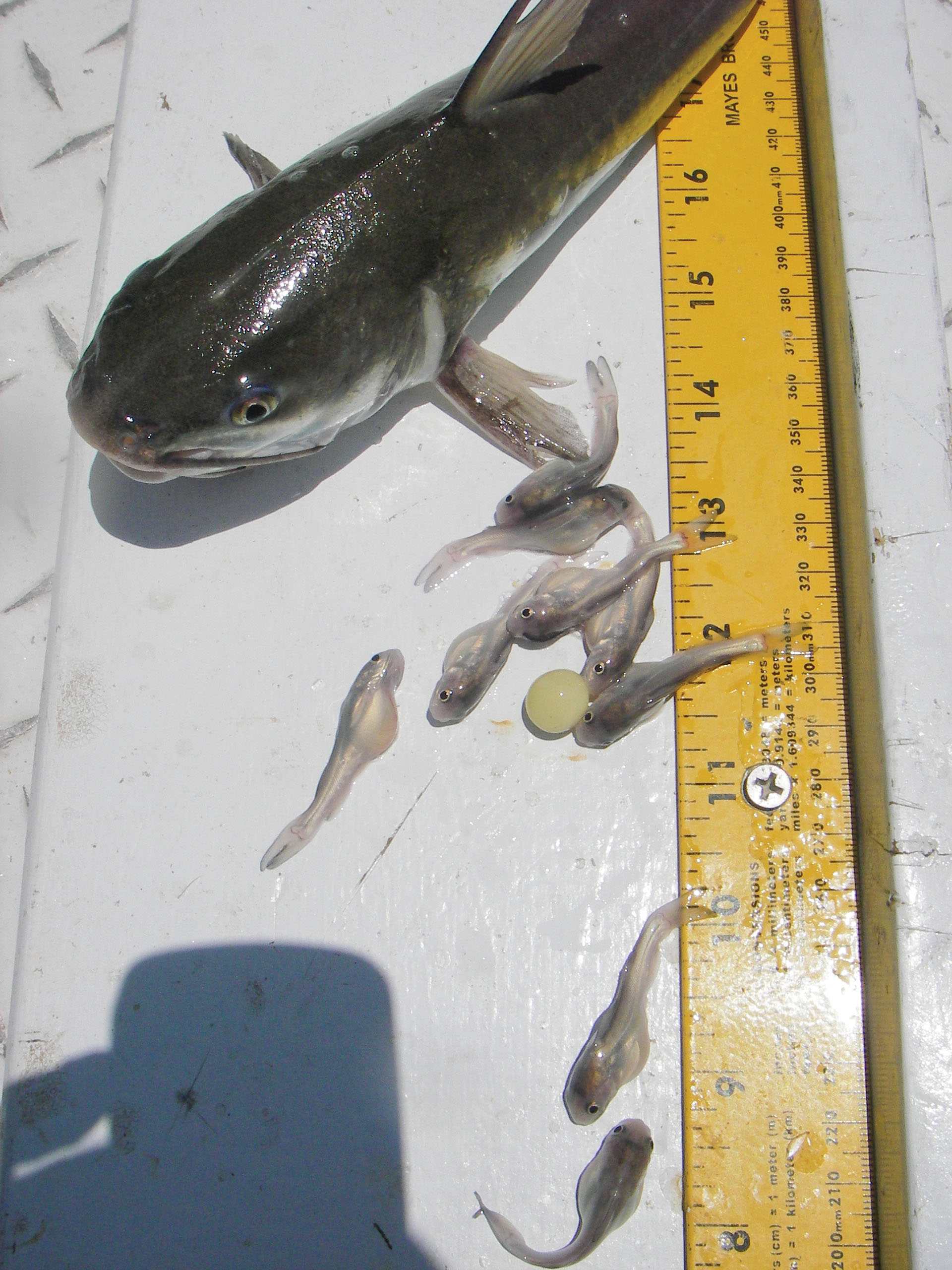 A male hardhead with his brood. Photo by Scott Eustis, University of New Orleans
Finally, an article dedicated to the coastal anglers's favorite catch: the saltwater catfish. Every fisherman aspires to reel in that whiskery confection, that spiny delight, that- what? You caught one yesterday? And the day before? Every day last week? …and you were targeting reds? Hmm…

The hardhead catfish, Ariopsis felis, has six whiskers, called barbels - one long pair and two shorter pairs. It sports three spines, one on the dorsal fin and one each on the pectoral fins. Like many marine fish, it is dark on top and light on bottom. The average adult size is ten inches and half a pound. The Texas record is nineteen inches, 3.3 pounds (1997).(1) The gafftopsail catfish, Bagre marinus, also has three pairs of barbels, similar coloration, and three spines. It is named for its sail-like dorsal fin. Gafftops average about 2.5 pounds; the Texas record is 13.3 pounds, thirty-four inches (1981).(2)

Saltwater catfish are notorious for cleaning your hooks before other fish get a chance to chomp down. Though both are edible, there's much debate among fishermen about their dinner value. Seems like gafftops are generally acceptable table fare; hardheads less so, but there are a few fishermen who say if you know just how to cook them…

For those always seeking to avoid the cats, here's a tidbit that might come in handy. During the summer, males are busy being dads. Both marine catfish species spawn May through August. Females produce only 20-65 eggs per spawning, which seems rather low compared to the thousands that other species produce, but this low egg count is offset by the males' parental care. Eggs and young are brooded in the male's mouth for 60-80 days. This means, most of the day is spent hanging out on Dad's tongue, feeding on planktonic crustaceans in or around his mouth. No snacks for Dad though; brooding males do not feed.(3)

I can only imagine the males' endurance during this period, as catfish have twice as many tastebuds in their mouths as humans. In fact, the catfish's entire body is covered in taste buds and has been likened (quite often) to a "swimming tongue." It has about 180,000 taste buds covering its body; all in all, catfish have twenty times as many taste buds as humans.(4) They can literally taste the water they're swimming through. Umm, that could sometimes be… yucky.

While taste is one of their keenest senses, catfish are pretty well equipped all the way around. They have a powerful sense of smell and can detect some scents that are only one part per ten billion parts of water. It's possible they use smell to distinguish individuals and maintain hierarchy. Their scaleless skin is quite sensitive to touch, but it's the barbels that are in charge of feeling out the situation. Not only are they covered in extremely receptive nerves (and taste buds, of course), they can also pick up vibrations made by the movements of other critters. Handy in murky environments. Of course, in clear water, most catfish can rely on good eyesight, even in dim light because they possess the same see-in-the-dark eye technology that (actual) cats do. And for prey that is camouflaged or in hiding, they use their sense of electroreception. Though limited in range, this allows the catfish to sense natural electrical discharges from the body.(5)

Hardheads and gafftops don't have a large pool of predators. You have to be fairly tenacious if you're going after armed prey. Some of their predators include the longnose gar, bull shark, and large finfishes. Some fishermen use them as bait for large game fish, such as cobia. Despite being the most numerous gill-netted fish coastwide over the last thirty years (on average), there's not really much commercial harvest, and only limited recreational.(3) This due in large part to the unpopular flavor and slimy coating.

The spines are serrated, barbed, and envenomed… sort of. Technically, it's the slime on the spine that carries the venom, not the spine itself. It's a complex toxin composed of high molecular weight proteins and low molecular weight compounds and is secreted by glands at the base of the spine (or possibly along it; there's some disagreement among scientists as to the exact secretion position). More importantly, this toxin is believed to be rendered inert at temperatures over 105 degrees F.(6) (Also handy for stingray stabs.) So a hot rinse and soak is recommend if spined. (Tip: start your engine, wet a rag in the hot exhaust water, and put that rag on the wound.) Reactions to a marine catfish puncture vary widely, but most seem to agree that it's a very painful experience, at least. Some require a trip to the hospital. The spines are quite sturdy enough to go through even leather-soled shoes. Best to handle these creatures with a little respect.

If you're after a certain fish, I can see how catching a bunch of cats would be frustrating, but like everything else, they've evolved to fill a certain ecological role. Even if it's not obvious to us, it's not always wise to pull a Jenga block from the bottom if you don't know what blocks it's supporting.

"They used to tank cod from Alaska all the way to China. They'd keep them in vats in the ship. By the time the codfish reached China, the flesh was mush and tasteless. So this guy came up with this idea that if you put these cods in these big vats, put some catfish in with them. And the catfish would keep the cod agile. And there are those people who are catfish in life. And they keep you on your toes. They keep you guessin'; they keep you thinkin'; they keep you fresh. And I thank god for the catfish, because we would be dull and boring if we didn't have somebody nipping at our fin." - Catfish, 2010