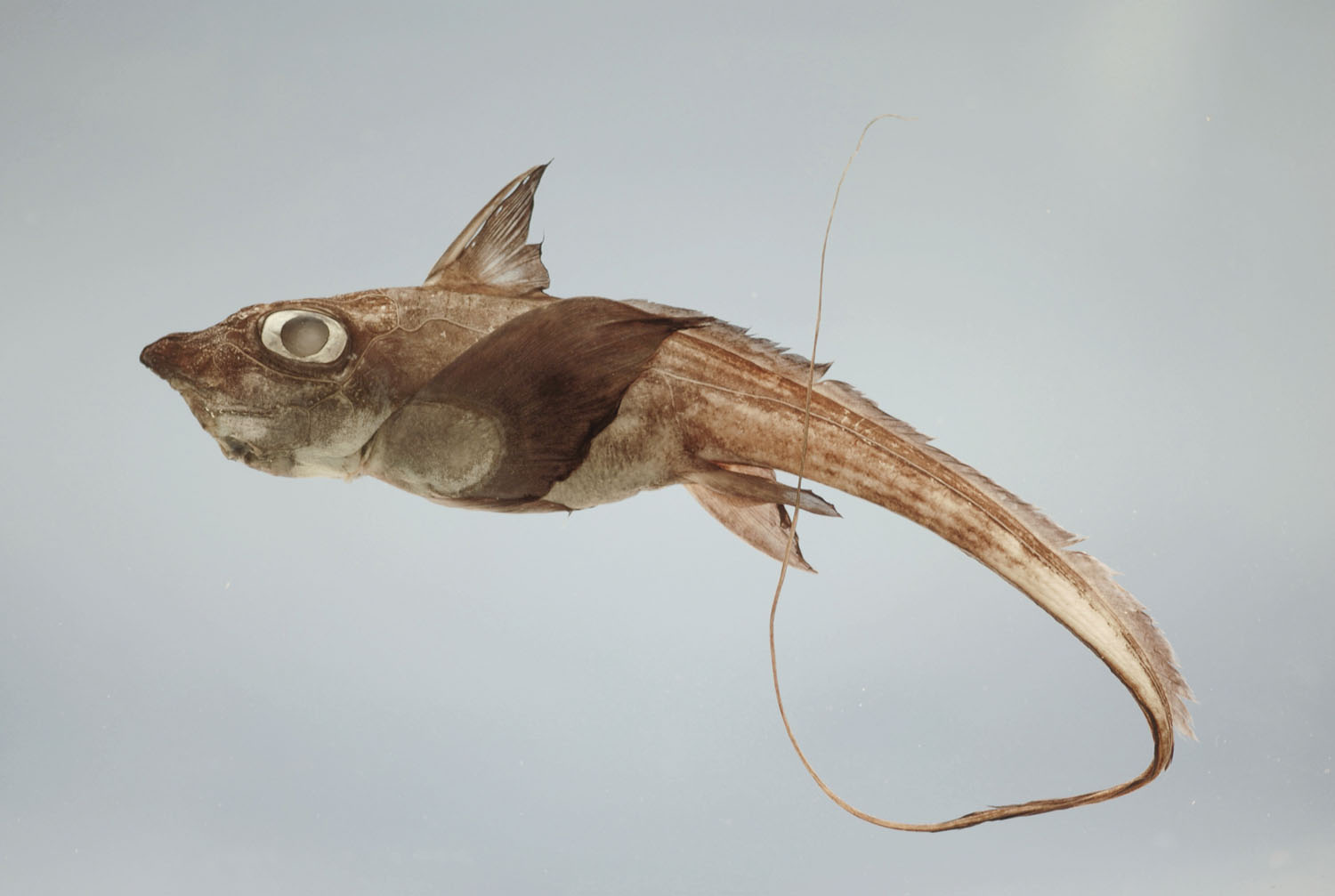 Hydrolagus alberti, one of the short-nose chimaeras. Photo by NOAA\NMFS\Mississippi Laboratory.

If the ancient Greeks loved anything, it was splicing creatures into terrifying mythological beasts (well, that and building temples). Some of the more bizarre (creatures, not temples) include the sphinx (body of a lion, head of a woman, wings of an eagle), the Cerberus (the three-headed dog that guards the entrance to the underworld), the Minotaur (body of a man, head of a bull), and the chimera (body of a lion, extra head of a goat, tail that ends in a snake's head, breathes fire). Early naturalists must have been reminded of these stitched-together creatures when they named the chimaera fish. These fish don't breath fire, largely due to the fact that they live in water, but they do have a seam-like lateral line system giving them the appearance of being sewn together.

Chimaeras are cartilaginous fishes in the class Chondrichthyes. Sharks and rays also belong to this class, and while chimaeras superficially resemble sharks, they're only a distantly related, ancient species, having diverged some 400 million years ago. They are known informally as ghost sharks, ratfish, spookfish, and rabbit fish not to be confused with rattails, true spookfish (family Opisthoproctidae), or true rabbit fish (family Siganidae). On the whole, chimaeras are rather peculiar looking. They have a disproportionately large head (appropriate since they belong to the subclass Holocephali, meaning whole head). They have rabbit-like front teeth, and large, plate-like grinding teeth fill the rest of the mouth. The tail is long and slim, even rat-like, you might say (if it weren't for the fins). It's mostly useless as a propulsion device, so they rely on their large wing-like pectoral fins to get around. Adults have scaleless, rubbery skin that comes in a variety of colors, and no stomach (food passes straight to the intestine). True to their name, chimaeras are grab bag of odd characteristics.

Depending on whom you ask, there are between 30 and 50 currently living species. These extant holocephalans represent a small fraction of a previously successful and diverse group. Chimaeras may be the most anciently formed lineage of jawed fishes. The earliest members of the class Chondrichthyes, they are thought to have originated some 420 million years ago, during the Silurian. Due to their cartilaginous skeleton, most deductions about early chimaeras are known from just tooth plates and fin spines, but if this fossil record is anything to go by, they reached their highest diversity during the Carboniferous, about 300 million years ago, and then decreased at the end of the Permian, about 250 million years ago.

Chimaeras inhabit all of the world's oceans with the exception of Arctic and Antarctic waters. Most species are deep dwellers of the shelf and slope off continental landmasses. They tend to prefer and aggregate near the bottom over a number of different substrates, including sand, mud, rock, and ooze. Like many of their shark cousins, chimaeras of different sex, age, and species segregate out by depth. In the Atlantic, juveniles and males are more common in shallower waters, while sub adults and females are more common in deeper waters. This depth segregation by maturity stage is common in many fishes. Sexual segregation by sex may have arisen from social factors, such as mate avoidance. Frequent mating may have a high cost for females due to blood loss or possible infection from bites or manipulations, evident within many shark species. Staying separate from the opposite sex when not engaged in mating activity may be best for both breeding success and survival from repeated and prolonged mating attempts. Additionally, shallow, warm waters may have a positive effect on sperm production, and deeper, cold waters may support embryo growth. Sexual segregation can result in differential fisheries exploitation of the sexes (even just as bycatch), identifying a possible need to manage stocks spatially to prevent depletion and local extinction.

Chimaeras do share similar reproductive and life history characteristics to many sharks, starting with internal fertilization. A male chimaera has two claspers behind his pelvic fins and a supplemental, retractable clasping organ on the head, a type of tentaculum. It fits and attaches to a corresponding hollow on the back of the female's head during mating. And it looks like a tiny medieval torture device (imagine a spiked club). All chimaeras are oviparous, meaning that they lay eggs. Most species lay two eggs at a time. The eggs are contained in small, leathery, frilled cases. It can take four to six days for the female to extrude the eggs, which can take another twelve months to hatch. This incubation period is thought to be even longer in deep-water species and is also one reason why populations may be sensitive to fishing mortality. Though they are long lived, between 25 and 30 years, they don't attain sexual maturity until at least 11 years, and they produce few young.

Add to that the fact that they are relatively weak swimmers and are delicate when caught, dying quickly out of water, and you might wonder how these fish survive to propagate. Since they spend most of their days swimming just above the sea floor, searching for food, they're most vulnerable to attacks from above. They protect themselves by having a spine just in front of the first dorsal fin, which is venomous in at least some species. In addition to discouraging marine-based predation, the spines also serve as a deterrent for wary deep-sea anglers. Though the venom itself is only mildly toxic to humans, causing burning sensations and swelling, the spine alone can inflict a painful wound.

Chimaeras are crunchers of hard food. Instead of rows of bristling, disposable razor blades, like sharks, chimaeras possess beak-like chompers in front and permanent bony plates inside the mouth for crushing hard-shelled bivalves, mollusks, crabs, sea stars, etc. The mouth faces downwards, which helps it hoover up squishier fare as well, such as worms and small fish. Chimaeras hunt primarily at night, when it's hard to see. Like other cartilaginous fish (and some bony ones), they can detect the weak electric fields produced by living organisms. The "seams" all over their bodies are a lateral line system, which detects movement and vibration in the water. On the front and lower sections of the head, the lines become a series of dots. These dots are the location of the electroreceptors.

Even with that spine, chimaeras have some predators, including (not surprisingly) humans. Their meat is edible and sold as food in some areas. However, it's their liver oil that seems more popular. Once, it provided a useful lubricant for guns and fine instruments. Now it's just another health supplement. The IUCN Red List classifies some species as near threatened. Deep water bycatch and demand for liver oil are increasing, and because of their habit of sexual segregation, intensive fishing practices that include spatial and depth targeting are highly likely to affect the viability of chimaera populations.

In Texas waters, we have two short-nose chimaera species: Hydrolagus mirabilis and Hydrolagus alberti, both rabbit fishes (Hydrolagus meaning water rabbit). In the Gulf, we have two more species, of the long-nose variety: Harriotta raleighana and Rhinochimaera atlantica (the knife-nose chimaera). Long-nose chimaeras are deep-sea fishes that, as a group, are very poorly known. None of our local species are among the more "famous" species. Perhaps the best-known short-nose species is the spotted ratfish (Hydrolagus colliei), found off the west coast of North America. It reaches almost three feet in length, has silvery-bronze sides sprinkled with white spots, and striking emerald eyes that reflect light like a cat's eyes, a special treat for any diver lucky enough to catch a glimpse. The best-known plough-nose species is probably the elephant fish (Callorhinchus milii), an important food fish off New Zealand. Reaching about four feet in length, the elephant fish is caught commercially in trawls and set nets to the tune of 1,000 tons per year. New Zealand's commercial fishing industry purports be "internationally respected for an innovative and world-leading approach to sustainable science-based fisheries," so hopefully the last of these wonderfully implausible creatures won't end up deep-fried and dolloped in tartar sauce.


Where I learned about chimaeras, and you can too!