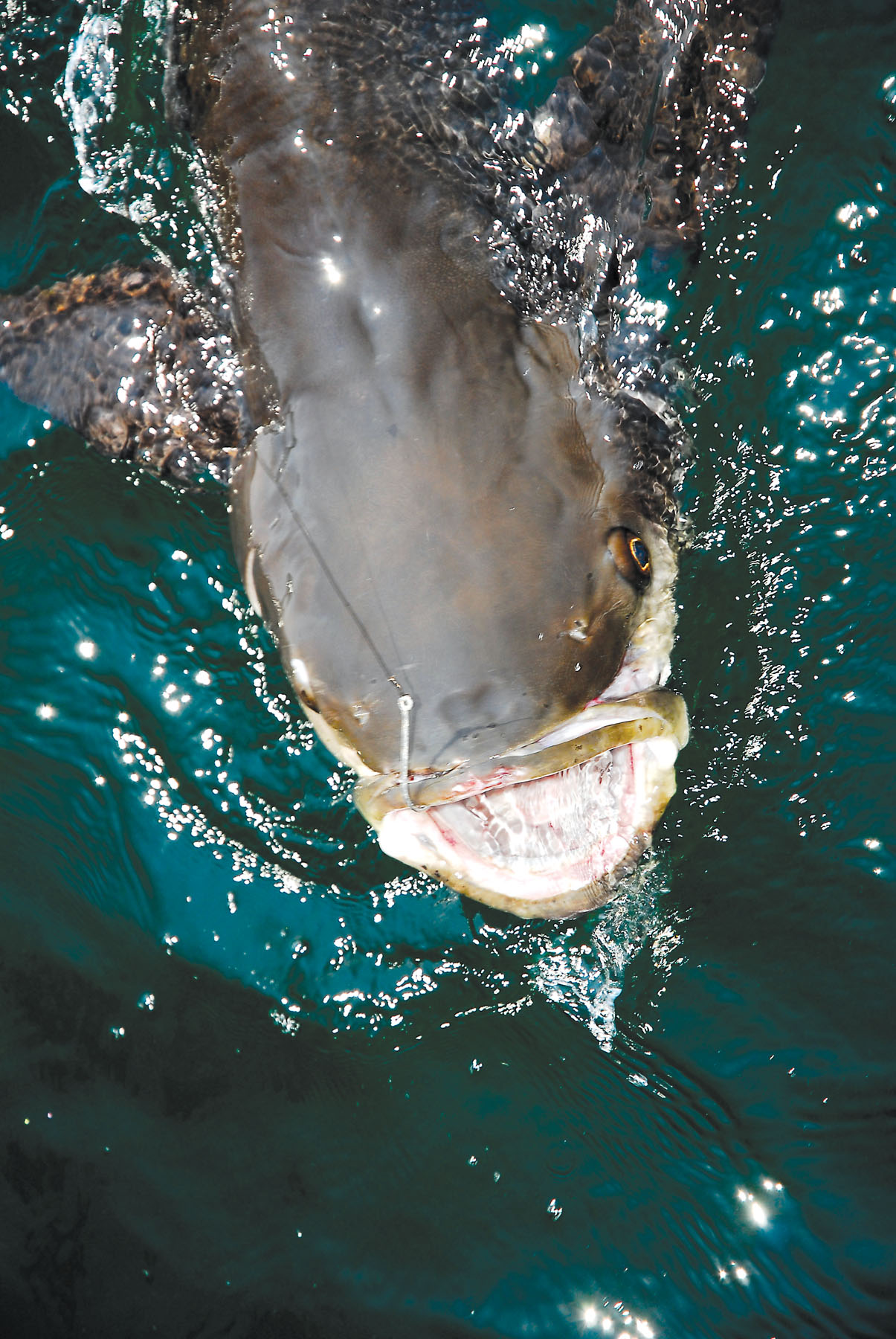 Photo by Joe Richard, "Contemplating Cobia"
Cobia are a fish that look like a shark and pull like a Chevy truck.

Cobia, a.k.a. ling, are the only member of the family Rachycentridae. The remora, or shark sucker, (family Echeneidae) is their closest living relative, and cobia are often mistaken for both sharks and remoras. The body is long and torpedo-shaped with a broad snout and depressed head. The eyes are small and the lower jaw projects past the upper jaw. The jaws, roof of the mouth, and tongue have bands of villiform teeth (teeth so slender and crowded that they resemble bristles of a brush, primarily used for stabbing, and more common on deep sea fishes). They have a large tail, which becomes more forked with age. The skin looks smooth with very small embedded scales. The large pectoral fins are normally carried horizontally, so that when viewed from above, the profile appears distinctly shark-like. Cobia have brown backs, a dark lateral stripe extending through eye to tail, and a white belly. They can also have two horizontal white stripes running the length of the body that fade with age. They have several small finlets ahead of their dorsal fin, which is comprised of 7 to 9 strong, unconnected spines. Young cobia are distinctly colored with alternating black and white horizontal stripes, and splotches of bronze, orange, and green.

Cobia are found in tropical, subtropical, and warm temperate waters around the world, except in the Eastern Pacific. In U.S. waters, they're most abundant from Virginia south through the Gulf of Mexico. In the Gulf, cobia are found from the major, high-salinity bays to waters 4,000 feet deep, but they generally stay within a depth of 250 feet or so. As a pelagic fish, cobia are found over the continental shelf. They are strongly attracted to any structure that interrupts the open water such as pilings, buoys, platforms, anchored boats, floating debris, seaweed rips, channel markers, and offshore oil and gas platforms. Occasionally, they're found tagging along with sharks, rays, and turtles. Smaller cobia are also found inshore inhabiting bays, inlets, and mangroves. Cobia migrate seasonally. They are most common off Texas in June through September and move to south Florida waters in the winter, possibly spending the winter near the Florida Keys. Research conducted through the Gulf Coast Research Laboratory in Mississippi has shown that not all cobia migrate. In one program, over 10,000 cobia gulfwide were tagged and released. Twenty-one recaptures were made in the northern Gulf during winter, most at depths of more than 100 feet, so some fish may stay in the northern Gulf year-round. Similarly, some cobia stay in south Florida waters year-round and do not migrate. Even in migration, cobia are rarely seen in large groups. The one exception is spawning.

Cobia spawn during daylight hours from April to September. They form large aggregations in the Gulf and may spawn 15-20 times in a season. During spawning, cobia undergo changes in body coloration from brown to a light horizontal-striped pattern. Eggs and sperm may be released in offshore open water or estuaries and shallow bays. Depending on their size, females have between 375,000 and almost 2 million eggs. Cobia eggs are spherical, averaging 1.24 mm in diameter. Larvae hatch about 24-36 hours after fertilization and are 2.5 mm long, clear-ish, and utterly helpless. The mouth and eyes don't even develop for five days! A pale yellow streak is visible then, extending the length of the body. Growth is rapid. By day 30, the juvenile looks like a miniature adult, with two color bands running from the head to the tail. By age two, the average length is about 35 inches. Females are usually larger than males; research indicates that 85% of cobia over 40 inches long are females.. Females reach sexual maturity when they are 36 inches long (about 3 years old). Males reach sexual maturity at 24 inches (2 years old). Measuring up to a record 79 inches, 135 pounds, cobia are more common at weights between 50 and 80 pounds and lengths of 20-47 inches. They have a moderately long life span. Maximum ages observed in the Gulf of Mexico are 11 years for females and 9 years for males. Most fish caught by fishermen are between 2 and 5 years old.

Cobia are not bashful predators, chasing down fish, squid, and crustaceans without reservation. They seem to especially prefer crustaceans, earning them the nickname "crab eater." As voracious feeders, cobia often engulf their prey whole. Of the non-crab variety, researchers have found hardhead catfish, eels, round scad, mullet, jacks, snappers, pinfish, croakers, and grunts in cobia stomachs, but very few shrimp. Cobia will also follow rays, turtles, and sharks, sneaking in to scavenge whatever is left behind. It is a very curious fish, showing little fear of boats. Predators of the cobia are not well documented, but mahi-mahi are known to feed on juveniles and shortfin mako sharks eat the adult.

Though cobia is a highly valued seafood species, there is no significant cobia fishery. In the wild, cobia are rarely seen in large groups, so only a small, incidental amount is caught. Despite this, cobia is a highly sought after food fish throughout its range. In Mexico, for example, it is known as "esmedregal," and is a popular fish for weddings and celebrations. In Belize, where it is known as "cabio," it probably won't even make it to market because the fisherman will keep it as a treat. Most of the cobia you'll find in stores or restaurants come from aquaculture operations. Cobia grow very quickly, reaching 13-15 pounds in one year after hatching; that's three times the growth rate of Atlantic salmon. Plus, farmed cobia have a low feed conversion ratio (the number of pounds of feed needed to produce one pound of meat). These characteristics make cobia an appealing aquaculture species, besides being a very tasty fish. Although commercial production of cobia is new to the west, it already has a successful history in Asia, so global production of cobia will likely expand in the future.

Cobia is also highly prized as a game fish. In fact, recreational landings make up more than 90% of total landings. It's a large, powerful fish that puts up a good fight and provides a tasty meal. What more could you ask for? Cobia fishing requires no special tackle or tactics. The same gear used for tuna fishing will work for these tenacious fighters. Cobia prefer structure such as reefs and wrecks, but will also venture into the shallows along with schools of stingrays. Cobia use stingrays the way a hunter uses a bird dog to flush game. They also like to feed on scrap fish from shrimp boats. Care should be taken when handling these strong fish. The dorsal spines are very sharp and stout. The Florida cobia record is 103 pounds 12 ounces, but the world record, held by Australia since 1985, is 135 pounds 9 ounces (a 6.5-foot fish).

If you spend enough time fishing [the Gulf], you will inevitably come across a dark, thick-bodied brute that, at first glance, may look like a shark. You may be scouring the grass flats for tarpon or circling an offshore buoy in search of blackfin tuna when you come across a torpedo-shaped shadow just within casting distance. Don't hesitate. Just toss your bait a few feet ahead of your target and hold on. You might be in for the fight of your life.
~ Hawks Cay

Where I learned about cobia, and you can too!