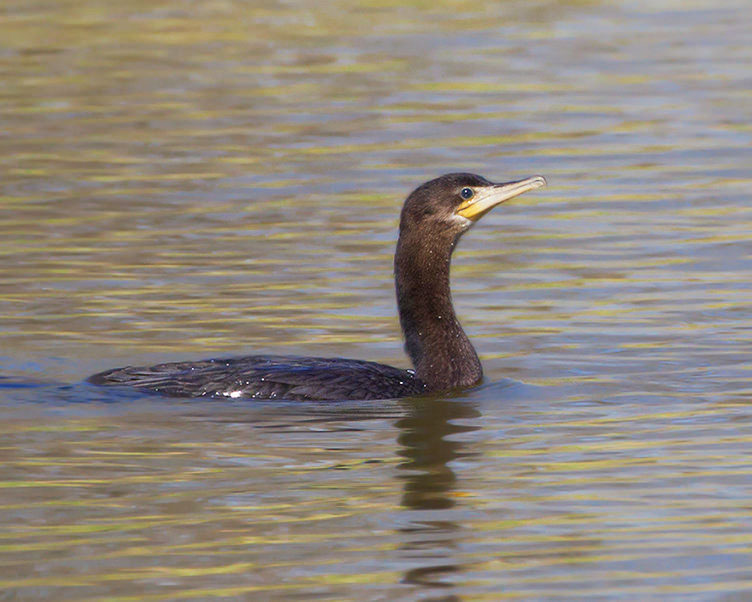 Since Biblical times, cormorants have drawn the ire of fishermen who have been forced to compete with them. While their superb fishing skills were definitely a hindrance in the past, it's likely that their somewhat prehistoric appearance earned them even more enemies. John Milton, in his epic poem, Paradise Lost, even portrayed the cormorant as Satan in disguise during his first attempt to deceive and tempt Eve. However, some cultures turned the cormorant's natural dexterity into an asset, using them to fish like falconers use birds of prey to hunt.

The majority of cormorants, including nearly all North American species and both species found in Texas, have mainly dark plumage. Many species have an area of brightly colored skin on the throat, which often becomes even more colorful during breeding season. The bill is long, thin, and sharply hooked. They are a coastal and inland bird, rather than oceanic. It is assumed that the ancestral lineage of cormorants dwelled in fresh water. Texas has two species: the double-crested cormorant and the neotropic cormorant (formerly the olivaceous cormorant).

Cormorants and shags, along with anhingas and darters, frigate birds, gannets and boobies, pelicans, and tropicbirds all share a unique characteristic: four webbed toes. Other birds with webbed feet (such as ducks and geese) have only three webbed toes. The hallux, or hind toe (the big toe in humans) is free. Because of this, all the birds with four webbed toes were grouped together in the order Pelicaniformes. But recent molecular studies have shown that pelicans and tropicbirds belong elsewhere in the avian tree. In 2010, the American Ornithologists' Union, the International Ornithological Congress, and the Clements checklist of birds of the world split and reformatted the Pelicaniformes and a sister taxa, the Ciconiiformes. Cormorants and shags were placed in the newly formed order Suliformes, along with frigate birds, boobies and gannets, and darters and anhinga. (Shags and cormorants are not taxonomically distinct; the term shag generally applies to smaller, stubbier-billed cormorants.)

The scientific genus name for cormorants, Phalacrocorax, comes from latinized Ancient Greek: phalakros, meaning "bald," and korax, meaning "raven." "Cormorant" is a contraction probably derived from the Latin corvus marinus, meaning "sea raven." In fact, "sea raven," and analogous terms, were the colloquial names for cormorants in Germanic languages until after the Middle Ages. This harkens back to times when all large black birds were dubbed "ravens." The misconceived impression that cormorants were related to ravens lasted until at least the 16th century.

All cormorants are primarily fish eaters (and consume an impressive variety), but when opportunity knocks, they won't turn down insects, crustaceans, or amphibians. Pursuit diving is the technique of choice for capturing prey. The bird dives from the surface and propels itself through the water with its feet. Many species make a characteristic half jump as they dive, presumably to give themselves a more streamlined entry into the water.

They hunt by sight, so you would expect cormorants to have excellent vision, similar to hawks in being able to detect and pursue prey from a distance. And cormorant eyes do appear to have some specific adaptations to their amphibious life style. The eyes have highly pliable lenses and powerful inner muscles that ensure a well-focused image. However, when measured, cormorant underwater eyesight was found to be unexpectedly poor. Cormorant visual acuity is, in fact, comparable to unaided human eyesight under water. Cormorants can detect individual prey only at close range (less than 3 feet). Their efficient hunting is due to specialized heron-like foraging techniques: a brief, short-distance chase and/or rapid neck extension to capture prey that is within eyesight or flushed from hiding at short range. Conclusively, cormorants are not the hawks of the ocean.

Upon return to the surface, the cormorant manipulates its fish into the easiest swallowing position, head first. A little more flair is used for crustaceans, including hammering the prey on the water to shake off legs and such, then a neat flip in the air to position the prey headfirst. Some cormorant species have been found diving nearly 150 feet for their lunch. The neotropic cormorant, found year-round on the Texas coast, is the only cormorant known to plunge-dive into water to catch fish (like the brown pelican does). This species will also fish cooperatively by forming a line across swift-flowing channels, striking the surface with their wings (causing fish to flee), then diving as a group to pursue them.

Cormorants are often seen perching on a rock or jetty with their wings outstretched. It was often assumed that this was for wing drying. To enhance diving, the top layer of feathers is less water resistant than in most birds, so they stay wetter longer. But this wing-drying theory was, at least partially, debunked when cormorants were seen "drying their wings" in the pouring rain. Now, no one really knows the reason. Could be for thermoregulation; could be to aid in digestion; could be for balance; could be a personal space issue... Probably, it's a mix of all these reasons.

Both of our species nest on the Texas coast; however a good portion of the double-crested cormorants breed further inland, while the neotropic tenants are here year-round. The breeding season for neotropic cormorants is quite long, from early January (first eggs) to late December (last fledglings), though the peak season is from May through July. The double-crested cormorants that stay to nest also have their young from May through July. All cormorants are seasonally monogamous. Males display from a chosen nest site by waving their wings and pointing their bill skyward, exposing the brightly colored skin of the throat. The female chooses her champion and sends him off to collect nest material; she defends the nest-site and constructs the nest, which may take up to five weeks. Coastal nesting takes place predominately in living or dead trees and shrubs, though they'll nest straight on the ground if that's what's available. Cormorants are colonial nesters, sometimes sharing nesting space with many different species. Nests are coarse platforms of sticks, usually three to twenty feet above ground or water. Building materials consist of twigs, green leaves, grass, seaweed, rope, deflated balloons, fishnet (really any plastic debris), and often parts of dead birds. Well, they have to work with what's available, right? Nest material is usually cemented together with guano, which over time, and with much accumulation, can kill the trees. Occasionally, large pebbles are found in cormorant nests, and the cormorants treat them like eggs.

Each mated pair has one brood per year. The pair can have up to seven eggs, though on average, they have 3-5. For many species, the eggs are a chalky-blue color. In Texas, young cormorants leave the nest at 3-4 weeks of age. They can fly at 6 weeks, dive at 6-7 weeks, and are independent at 10 weeks. They reach sexual maturity at two years.

Until 1972, all known breeding colonies of neotropic cormorants within the United States occurred along the coasts of Texas and Louisiana, more than 75% of these between Galveston Bay and Sabine Lake. After a severe population decline in the 1960s, to a low of about 14 pairs in 1967, the species has increased and established new coastal and inland colonies. Although the population is still in flux, the overall trend is an increase. The cause of the decline is not conclusively understood, but probably resulted from persistent coastal development and use of the pesticide DDT, which thins eggshells. In the last few years, about 1000 pairs of neotropic cormorants have typically nested on the coast.

The double-crested cormorant is a migratory resident of Texas, with the earliest non-breeders arriving at the beginning of August. Most are here from October through January, though a few stay as late as mid June. This species is the most widespread cormorant in North America and the one most frequently seen in freshwater. (The neotropic range extends southerly.) Their two main activities are fishing and lounging, with the majority of their day spent on the latter. When threatened, a double-crested may vomit fish at a predator. The oldest known member of this species was more than 22 years old, banded in Ontario in 1984 and found in Louisiana in 2006. In the 1800s and early 1900s, cormorants were frequently shot, and their numbers declined with westward settlement, but thanks, in large part, to the Migratory Bird Treaty Act signed in 1918, their populations have increased phenomenally. In the Great Lakes, some cormorant colonies have doubled in five years. Some people still regard cormorants as a threat to fishing stocks, and the U.S. Fish and Wildlife Service sometimes issues permits for controlled cormorant shooting to protect fisheries.

Cormorants can sometimes be difficult to identify, especially if you're looking for a crest. The double-crested only has a double crest during breeding season. In flight at a distance, Canada geese look much like double-crested cormorants, but flocks of geese don't change shape as much, and geese never stop flapping in direct flight. When swimming, cormorants ride very low, often with only their long necks evident above the waves. This is due to that top layer of partially water-permeable feathers and also to their heavy bones, more solid than the bones of most birds. That style of low riding in the water is characteristic of another bird, the anhinga. Mostly a bird of the swamps, the anhinga is known as the water turkey for its swimming habits and broad tail, and also as the snake bird for its habit of swimming with just its long head and neck sticking out of the water, very similar to a cormorant. Anhingas are less often found near salt water; they prefer fresh. But you'll find both anhingas and cormorants in brackish waters. Although these two water birds are often mistaken for each other, each of them has distinguishing characteristics. A primary difference between the anhinga and the cormorant is the shape of the bill. Anhingas have pointed bills while cormorants have a hooked bill. Cormorants also typically have a yellow or orange color near the bill, while anhingas do not. Both are very graceful in flight, but an anhinga will flap its wings and soar, while a cormorant soars almost continuously.

***Be sure to note the differences because it is illegal to shoot, harass, trap, harm, or kill a neotropic cormorant or anhinga.*** (Double-crested cormorants can be taken, but only with a federal permit.)

Fun Fact: The cormorant served as a hood ornament for the Packard automobile brand. (Many people mistakenly believed it to be a swan.)

Where I learned about cormorants, and you can too!

The Devil's Cormorant: A Natural History
By Richard J. King

–Field Guides for Distinguishing between Species–