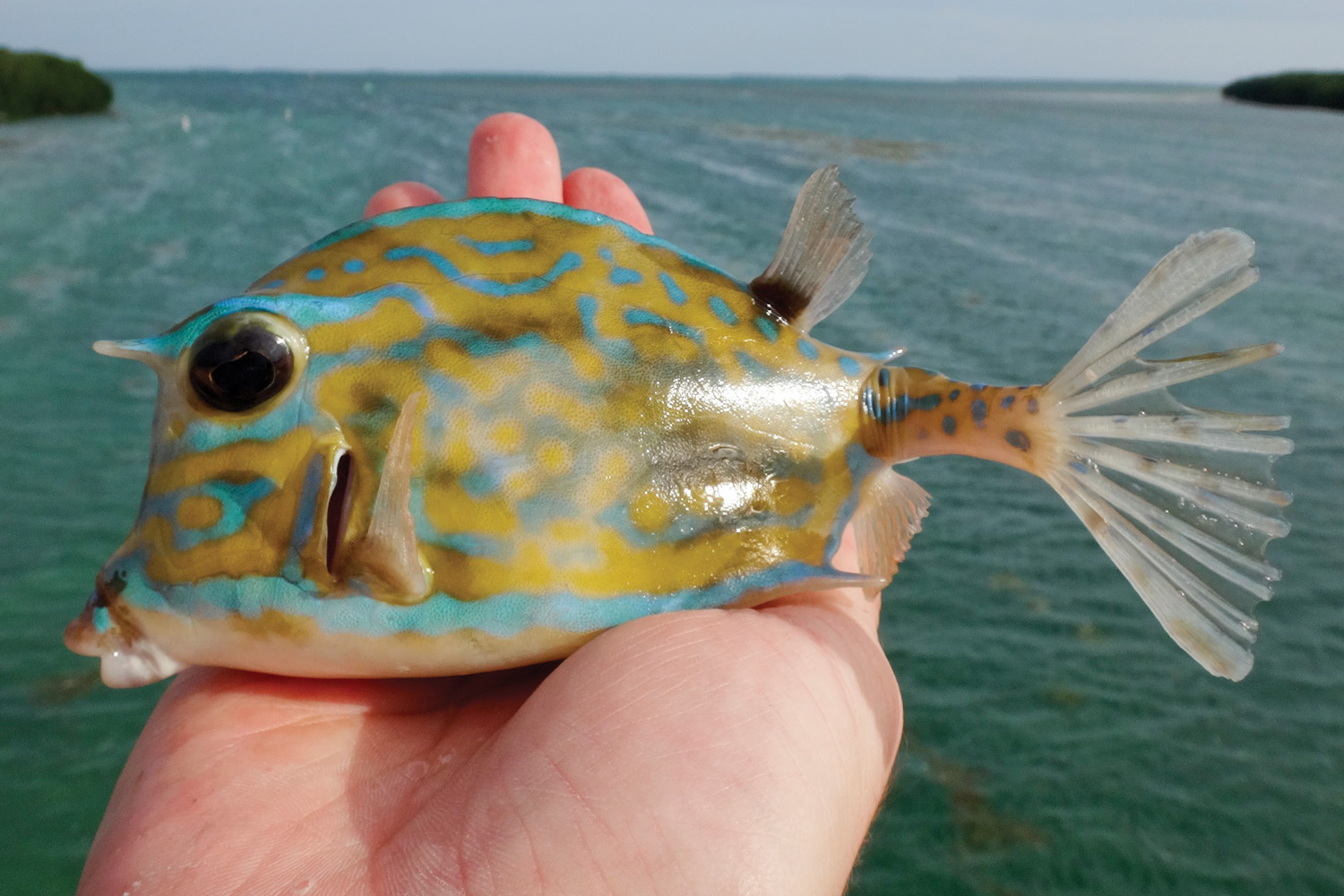 The pufferfish – one of the most famous examples of a creature that evolved in the slow lane, opting for armory over speed. In fact, almost the entire Tetraodontiformes order have followed the unorthodox path of convincing everything else in the oceans that, like those three-month-old leftovers in the back of the fridge, they are a snack that just isn’t worth the risk. But despite their odd and unappetizing exterior, pufferfish still possess a conventional fish skeleton inside. Their cousins, the boxfish, have moved on from such mundane biology, and taken armory to the next level. Boxfish come in two varieties: cowfish (with head spines) and trunkfish (without head spines). The members of this family, Ostraciidae, have two skeletons: an exterior bony carapace and a reduced interior system, for internal organ support. Cowfish carapaces are triangular bony boxes composed of fused hexagonal dermal plates. Like a skull, there are precious few openings in this armor: eyes, gills, lips, and fins (including the anal fin, because it doesn’t excrete waste through its mouth). The mouth is small with fleshy lips, at the end of a sloped profile, and contains fifteen or less moderate, conical teeth in each jaw. Pelvic fins are absent, along with pelvic bones.

There are several species of cowfish. We have two regularly occurring species in the Gulf: the scrawled cowfish, Acanthostracion quadricornis, and the honeycomb cowfish, Acanthostracion polygonius. Acanthostracion comes from the Greek akantha and ostrakon, meaning thorn shell. Both have a pair of spines projecting from in front of the eyes, hence the name “cowfish.” A second pair of spines is located at the rear corners of the carapace. Scrawled cowfish are generally yellowish to olive green with vivid, opalescent blue scrawling patterns and dark splotches on the body. Three or four parallel-ish blue stripes on the cheeks just below the eyes are an identifying feature, though some individuals lack these prominent markings. The honeycomb cowfish’s coloring emphasizes the hexagonal plates of the carapace. Each plate has a pale border and center with a dark ring in between, giving the distinct “honeycomb” appearance. Color palettes range from gray to bluish, greenish, purplish, or yellowish and brown. Honeycombs lack the recognizable cheek stripes of the scrawled cowfish. Also, their tail fin is unmistakably rounded, while the scrawled cowfish tail can be either rounded or truncate (shortened/flat).

Both the scrawled and honeycomb cowfish are fairly shallow water denizens, neither venturing much beyond about 260 feet deep. Scrawled cowfish quite like seagrass beds, though they also hang out around reefs. Honeycombs live almost exclusively around coral and rocky reefs. Scrawled cowfish eat anything too slow-moving or small to escape, including crustaceans, sponges, hermit crabs, marine vegetation, and sessile invertebrates such as tunicates, gorgonians (sea fans, sea whips), and anemones. Actually, a lot of those have zero chance of escape… Honeycombs also eat sponges and tunicates, along with shrimp and alcyonarians (blue coral, soft coral, sea pens, and gorgonians). Larger fish are potential predators, however crunching down on a cowfish is “less like the satisfying splintering of a hard taco and more like trying to chew a kneecap… Not too many predators jump at the opportunity to slam their pearly whites down on what is effectively the peach pit of the sea.” Of course, the cowfish’s armor is its last resort. They first rely on camouflage and stillness, changing colors to blend more effectively with the surrounding environment or partly burying themselves in the sand and remaining stationary for long periods of time. Failing these strategies, they can also discharge a toxin, one very dissimilar from that of their cousin, the pufferfish.

Puffers are endogenously toxic, meaning another fish has to take a bite out of, or otherwise come into contact with, them to be poisoned. Great for the species as a whole. Unfortunate for the individual teaching the lesson. Cowfish secrete their toxin in a slimy mucus that oozes from specialized skin cells all over the body and disperses into the surrounding water. The poison is a surfactant called pahutoxin, also known as ostracitoxin. Surfactants are compounds that lower the surface tension between two liquids or between a liquid and a solid, meaning they make certain substances that don’t normally dissolve in water suddenly very dissolvable in water. One example of a surfactant we all (hopefully) use every day is soap. Just think how dish soap breaks down all that oil and fat left on your skillet. Obviously, rubbing soap on a fish is no good for the fish, but pahutoxin is even more insidious. Studies in the last decade have hinted that this toxin binds itself to specific receptors in the gills (receptors that are conveniently absent in the cowfish). Combined with its hemolytic effect (meaning that it ruptures red blood cells – the cells that incidentally carry all the oxygen), pahutoxin basically asphyxiates any gilly fish caught in the cowfish’s slimy cloud. In the wild, the toxin would gradually dilute to the point of being functionally benign, but cowfish are popular specimen in the aquarium trade and as such often find themselves is small, closed systems. It’s unfortunate to have a cranky tankmate, but even more unfortunate to have a timid little death machine. The moment anyone gets a little too nippy, the cowfish’s DANGER mode is triggered and out comes the invisible smog of death, like a fart in an elevator. The good news is cowfish (and other boxfish) poison apparently isn’t a problem for humans. In some parts of the world, cowfish are even considered a delicacy and roasted over the fire like chestnuts. (You should take care if eating, however, as some boxfish have been implicated in ciguatera poisoning, a contamination from certain dinoflagellates and not related to pahutoxin.)

If a predator sees past the camouflage and somehow avoids the toxin, the armor is the cowfish’s ace in the hole, because it’s certainly not out-swimming anyone. Since their entire body is inflexible, adult cowfish are only able to propel themselves by undulating their tiny fins and the tip of their tail, a type of movement called ostraciiform swimming. The juveniles of some species are more oval in shape and thus faster swimmers, but not by much. However, cowfish do possess some evasive skills, such as being able to turn on a dime and dart into secluded overhangs and holes. Both the scrawled and the honeycomb commonly reach just under a foot in length, and can grow up to around twenty inches. Scrawled cowfish are mostly solitary. Honeycombs often school in groups of three: a male and his harem. Both species spawn in open water. They don’t guard their eggs, but they will guard their resources.

Cowfish are a popular fish for tourist divers and public aquariums. You’re much more likely to see the scrawled cowfish in our waters, as the honeycomb is somewhat rare and shy. If you catch a scrawled cowfish, be prepared for a grunting protest while you release it from net or line. Though cowfish are slow and easy to catch, handle with care because their horns are sharp!

Where I learned about cowfish, and you can too!

Dangerous Sea Life of the West Atlantic, Caribbean, and Gulf of Mexico
By ‪Edwin S. Iversen and ‪Renate H. Skinner

US National Library of Medicine
www.ncbi.nlm.nih.gov/pubmed/12893062