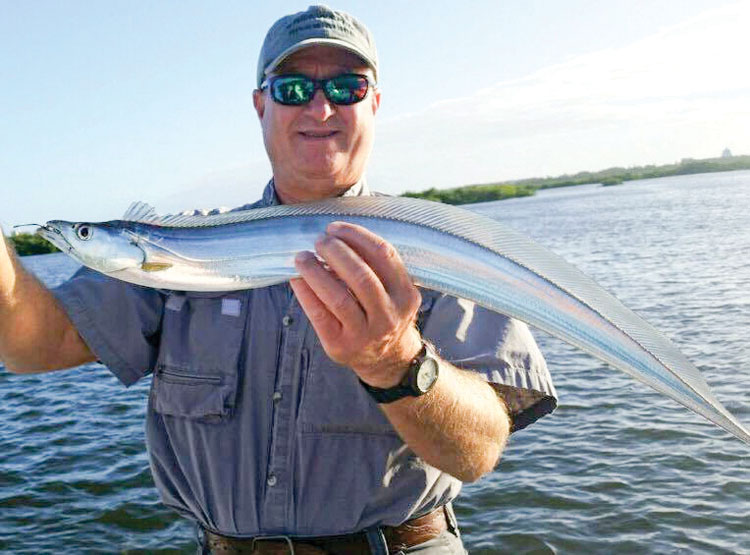 The cutlassfish derives its name from its curved shape, much like that of a cutlass sword. Fish of the family Trichiuridae (Greek for hair tail) are long, slender, and generally steely blue or silver in color, also like their namesake. This family has several deepwater members that occur in water depths greater than 600 feet, and one member that occurs in shallow waters: the Atlantic cutlassfish. Found throughout the tropical and temperate oceans of the world, the Atlantic cutlassfish was long considered a cosmopolitan species (a species whose range extends across all or most of the world in appropriate habitats), but it may represent a species complex comprised of three main groups: the Atlantic, East Pacific, and Northwest Pacific (Japanese) populations. Though the groups differ slightly in morphology and genetics, and are sometimes, colloquially, recognized as different species, the boundaries between them are often unclear and, as such, are generally still categorized as one species, Trichiurus lepturus.

Members of Trichiuridae are also called scabbardfishes or hairtails; some are called frostfishes because they appear in late autumn and early winter (around the time of the first frosts). In Texas, Atlantic cutlassfish are usually called ribbonfish. This fish is unmistakable – a long, skinny, scaleless body (giving an eel-like appearance); a single dorsal fin running from head to almost end of body; shiny, metallic silver skin; tiny spines along belly from anus to tail; a lower jaw that juts out farther than the upper jaw; and a mouth full of large, fang-like teeth. Adults can reach over 7 feet in length, though they average closer to 3.5 feet. The Texas rod and reel record is 4.2 feet, 4.7 pounds – caught on a Bass Assassin in Corpus Christi Bay by Travis Colley. The bright, steely-blue skin readily loses its silvery coating after capture, becoming uniformly gray sometime after death.

This benthopelagic (both benthic and pelagic) species is generally confined to continental shelf waters, ranging from shallow sandy or muddy estuaries to depths of 1000 feet. Although common in bays and inshore Gulf waters, cutlassfish aren't popular. They steal bait and won't hesitate to use their sharp, barbed teeth on unwary anglers. One look at the ribbonfish's intimidating assortment of dental equipment and it's obvious this fish is built for grabbing live prey. Adults feed mainly on other fishes, such as herrings, anchovies, drums, jacks, and catfishes, though they'll also dine on shrimps and squids if the opportunity arises. They frequently eat each other, as well. Cutlassfish lack the broad, stereotypical fish tail that is the primary means for fast, powerful swimming. Instead, they undulate their entire body, like an eel, to move through the water. This method of propulsion is not very powerful, and most of their prey can probably swim much faster. Consequently, the cutlassfish has evolved as an ambush predator, with an innovative hiding technique. They suspend their long bodies vertically a short distance below the surface, with their toothy jaws upward and long, tapered body hanging downward. Remaining motionless in this position, they present a very small visual cross section to prey swimming overhead. When a fish ventures too near, the cutlassfish lunges upward and seizes the unsuspecting victim. If the cutlassfish is close to the surface, the forceful strike can propel it straight out of the water. Some anglers claim that it's not uncommon for one to rocket out of the water six feet in the air.

Fearsome as this toothy predator seems, it is certainly not the sea’s top predator. Dolphins, seals, and sea lions all prey heavily on this species. A variety of larger fish also have cutlassfish on the menu. Its comparatively slow swimming makes it particularly vulnerable to these predators, and its habit of forming dense shoals make it particularly vulnerable to us. Though cutlassfish aren't used as a food fish in the U.S., they supposedly have an excellent flavor and are a major commercial species in China, Japan, South Korea, Taiwan, and others. Atlantic cutlassfish are the most abundant and frequently caught commercial trichiurid worldwide. It is notable for being fairly easy to debone; its flesh is firm yet tender when cooked, with a moderate level of "fishy smell" and a low level of oiliness; and it’s tasty fried, grilled, or raw (sashimi) and is marketed fresh, frozen, dried, or salted.

In the Gulf of Mexico, this species is taken as incidental catch in fisheries targeting large carangids (jacks, pompanos, etc). Their primary use in the U.S. is as bait for offshore gamefish, such as king mackerel, Spanish mackerel, and wahoo. Though not usually targeted by anglers, this fish is caught relatively easily using light tackle and small lures or surface baits. According to angler anecdotes, big ones "will hit a MirrOlure or spoon like a freight train. They hit so hard that with the long teeth you will miss a lot of them, but with a MirrOlure you can see the teeth marks." The current angling world record is 8 pounds 1 ounce, caught by Felipe Soares in Rio de Janeiro's Guanabara Bay in 1997. Commercial fishermen have caught cutlassfish up to 11 pounds.

The cutlassfish's life history has been fairly well deciphered. Juveniles are found in the central, coastal area of Texas in May and June, indicating spawning as late as February. Females produce an estimated 3400 eggs per spawning batch (130,000 over the entire spawning season). Eggs are pelagic and hatch after 3 to 6 days. Young are found in deeper water than the nearshore-inhabiting adults, indicating an offshore-to-inshore recruitment pattern. In the Sea of Japan, Atlantic cutlassfish mature at 2 years old (about 1 foot in pre-anal length). The oldest recorded age is 15 years, though they generally live only 7 or 8 years. Though populations have declined from the central to northern coasts of China due to fishing pressure, the IUCN Red List classifies Trichiurus lepturus as Least Concern, no overall/worldwide population decline. If the species (complex) split, the Atlantic cutlassfish would retain the scientific name T. lepturus; the Northwest Pacific (Sea of Japan and East China Sea) would be recognized as T. japonicus; and the East Pacific (California to Peru) would be recognized it as T. nitens. They are already referred to as such in some literature. If the split becomes formalized, it is likely each group would be re-evaluated for classification on the Red List, eventually.

Where I learned about cutlassfish, and you can too!

Food and Agriculture Organization of the United Nations
www.fao.org/fishery/species/2468/en