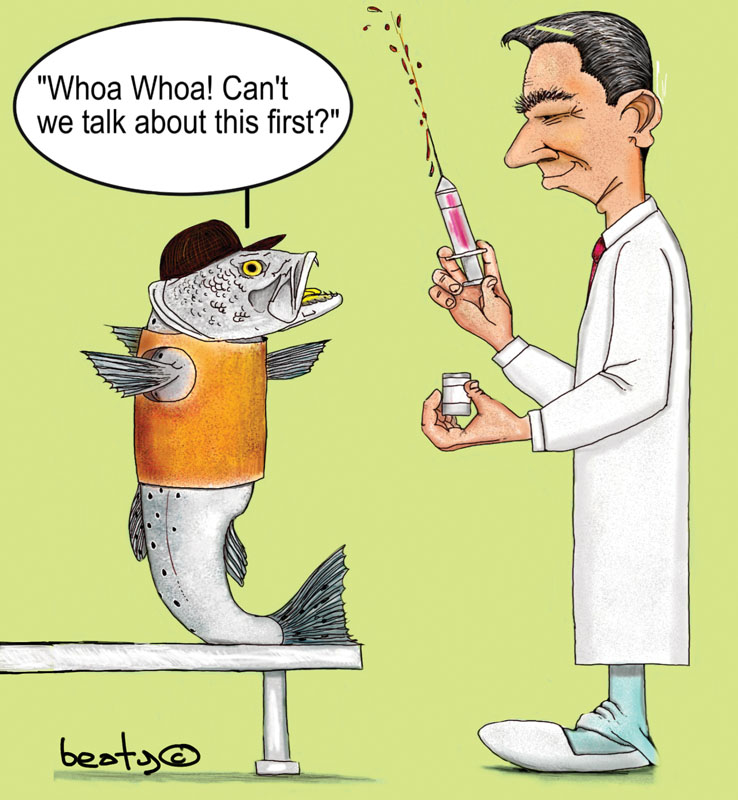 Disclaimers: The study of whether or not fish feel pain is a divisive issue that certainly can't be thoroughly addressed in a single article. Furthermore, the neurobiology in this matter is complex, and I'm not qualified to tell if any of it is correct, though I accept that explanations of neurobiology presented in peer-reviewed studies are accurate.

There are three terms paramount to the understanding and interpretation of information surrounding the subject of fish pain: noxious stimuli, nociception, and pain. A noxious stimulus is one that is physically damaging to the body such as cutting, extreme cold, extreme heat, etc. or causes the activation of sensory receptors or nerves that would be stimulated if the body were physically damaged. Nociception is the physical response of sensory receptors to noxious stimuli. Pain is a psychological and emotional response to nociception, a conscious perception that, in humans, depends on activation of certain regions in the forebrain. The International Association for the Study of Pain (IASP) defines pain as (1) an unpleasant sensory and emotional experience associated with actual or potential tissue damage, or described in terms of such damage; (2) always subjective; and (3) sometimes reported in the absence of tissue damage.

This is how it works: noxious stimuli trigger nociceptors; these receptors send electrical signals through nerves and the spinal cord to the cerebral cortex where, with full awareness, they are processed into a sensation of pain. However, it should be noted that pain is not a necessary consequence of noxious stimuli or nociception. As an emotional state, pain can be intensified through fear, nullified through mental discipline or hypnosis, imagined without any actual injuries, or faked. Conversely, stimulation of the nociceptors can be unconsciously processed, bypassing any experience of pain. There are, for example, many stories of people who experienced severe injury without feeling any immediate pain. It is for this reason that pain research should distinguish between a conscious awareness of pain and an unconscious processing of impulses through nociception, the latter of which can result in complex hormonal reactions, behavioral responses, withdrawal reflexes, conditioned aversion, etc. This is important because what looks like pain behavior, can occur unconsciously, without pain.

Second verse, same as the first:

Reinforcing what we just learned – pain is not felt at the level of a sensory receptor, peripheral nerve, or pathway within the spinal cord; it must be interpreted in the cerebral cortex. There are no 'pain pathways' in the nervous system, just nociceptive pathways. Similarly, rods and cones in the eye are correctly called photoreceptors, not vision receptors, because vision occurs when the brain translates the signals from the photoreceptors. And like how nociception does not necessarily lead to pain, photoreception does not necessarily lead to conscious vision (hence subliminal messaging). You can also "see" images with your eyes closed (and feel pain without injury). It is essential to understand this distinction as most studies concerning fish pain hinge on it.

One more, extra, term needs defining: anthropomorphism, which is the attribution of human characteristics or behavior to something that is not human a god, an animal, an object, etc. As in, "That chair looks sad. That lion looks like she's pondering the meaning of the universe. That fish looks like he's in pain." How you and I react to joy, confusion, pain, etc. may not be how another creature reacts, and the more different our physiology from any particular creature, the less applicable anthropomorphism becomes. (You will have more luck guessing what a chimpanzee's behavior means than a dragonfly's because the chimpanzee conceptualizes the world in a way more similar to us than does the dragonfly.)

Okay, on to the meat! I'm going to divide this article into two camps: Fish Feel Pain & Fish Feel No Pain, in that order.

MVP in the Fish Feel Pain camp is Sneddon et al., a study in 2003 in which Lynne Sneddon and colleagues at the Roslin Institute, near Edinburgh, Scotland, measured individual neurons in anaesthetized rainbow trout while they poked the fishes' heads and applied acid and heat.

Their results identified up to 22 neurons that fire in response to the stimuli, in a similar pattern as neurons in humans that transmit the 'pain' message. They also discovered 58 receptors in the heads of rainbow trout that responded to electric and chemical shocks. They injected bee venom, acetic acid, or saline solution (the control) into the lips of each trout. The fish injected with bee venom or acid reacted immediately, rubbing their lips on the side or bottom of their tank, rocking from side to side, and breathing at a rate comparable to that of a fish swimming at top speed. They also took 90 minutes to resume feeding. Sneddon argues that these behaviors are not just reflex responses, but evidence of persistent pain.

Another big name in the FFP camp is Sylvia Earle, a well-known oceanographer and advocate for ocean preservation and fish welfare. Sylvia, now 80 years old, has spent the better part of her life (since she was 16) studying the ocean. She has seen the ocean deteriorate in ways humans never thought it could between overfishing, pollution, and rising temperatures, the ocean's chemistry is off kilter, and reef paradises that she used to love are now dead and barren. She says that populations of larger predators such as cod, marlin, halibut, and sharks have fallen 90 percent in the last 70 years, and that "eating these fish is like eating the last Bengal tigers." In response, she has been instrumental in establishing Hope Spots, protected places in the ocean where dumping, mining, drilling, fishing, and all other such actions are prohibited. Right now, about two percent of the ocean has that protection; she hopes to have 20 percent of the ocean fully protected by 2020. However, Sylvia is concerned for fish from more than just a conservative view. She believes the "misconception that fish can't feel pain has been completely disproven," a belief that seems to stem from the Sneddon study. Watching a school of anchovies, she points out that they are not "just some endlessly abundant school. Each one of these fish is also its own individual being." At times, she sounds like the Jane Goodall of the sea.

I'll end the FFP camp discussion with a recent (2014) study "Physiological and Behavioural Responses to Noxious Stimuli in the Atlantic Cod (Gadus morhua)," by Jared R. Eckroth, yvind Aas-Hansen, Lynne U. Sneddon, Helena Bicho, Kjell B. Dving. Sneddon is an important contributor in this study, as well, responsible in part for conceiving and designing the experiments, analyzing the data, and writing the paper. This study also injected noxious stimuli into the fishes' lips acetic acid, capsaicin (an active component of chili peppers that can produce long-lasting intense burning pain in humans), and a commercial fishing hook and observed the results compared to fish injected with saline. Atlantic cod was chosen because it is commercially important, and we know a lot about the species already. A total of six treatment groups were used. Saline (control group), 7 fish; 0.1% acetic acid, 7 fish; 2.0% acetic acid, 7 fish; 0.005% capsaicin, 6 fish; 0.1% capsaicin, 8 fish; and fishing hook, 7 fish. Metacaine was used as a pre-treatment anesthetic. Both acetic acid groups displayed a slight delay in the recovery of OBR (opercular beat rate), reduced use of shelter, and increased hovering in the bottom of the aquaria. The 0.1% capsaicin group displayed the same (0.005% had no effect). The only effect observed in hooked Atlantic cod was occasional head shaking movements (likely the fish is, at least, aware of the hook). The study found that acetic acid, capsaicin, and the presence of a fishing hook in the lip of Atlantic cod did affect behavior when compared to the responses seen in the control group. The authors believe this corroborates results found in the 2003 study, as well as other similar studies with goldfish, zebrafish, and common carp.

Stay tuned next month for the rebuttal from the Fish Feel No Pain camp!