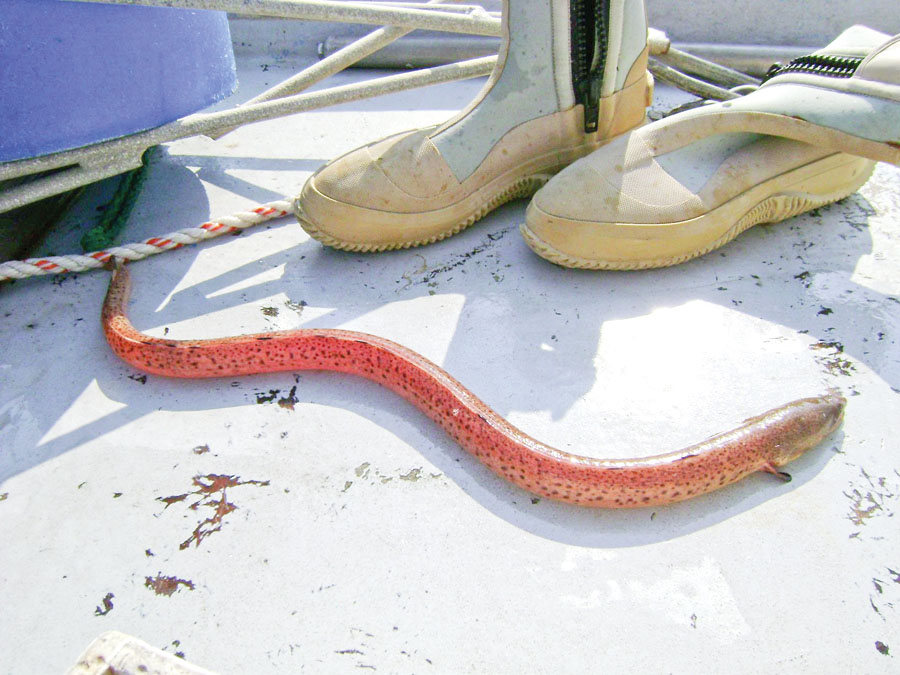 Stippled spoon-nose eel, Echiophis punctifer (also known as a snapper eel; can grow up to 6 ft). Photo credit: TPWD.
There are many myths concerning the origin of the coconut tree...

...and they all center around eels – specifically, the eel god, Tuna (aka Tuna-roa, Te-Tuna, etc.). Each myth is a unique version of Tuna's pursuit of the woman he loves, Hina (aka Hina-moa-aitu, Sina, etc.). They all end with Tuna's head being chopped off and planted, and ta-da! The first coconut tree sprouts. Some of these myths explain the origin of eels as well, but western scientists have their own thoughts about that.

Aristotle, the pioneer of eel research, postulated that the European eel, the most familiar eel of the time, was born of "earth worms," which emerged from the mud spontaneously. They grew from the "guts of wet soil." Since no one could prove otherwise, this theory stood for a long time. Later scientists adopted a new origin theory: the eelpout, Zoarces viviparus, known in Germany as aalmutter, "mother of eels." Well, the translation alone is suspicious...

Some actual science came along later in the guise of Carlo Mondini, the Italian who found eels' gonads and proved that they were indeed fish. In the 1870s, a young Austrian student dissected hundreds of eels in search of the apparently elusive male sex organs. He failed, though I doubt many people remember Sigmund Freud for that particular pursuit anyway.

Until the 1890s, larval eels were thought to be a completely different species, unrelated to their parents. But I guess that's not too unusual; plenty of kids claim no relation to their parents at some point in their life. Fortunately for eel parents, French zoologist Yves Delage kept leptocephali (the transparent, ribbon-like, two-inch larval eels) alive in a laboratory tank until they matured into eels, and Italian zoologist, Giovanni Battista Grassi furthered this discovery by observing the transformation of a leptocephalus into a round glass eel in the Mediterranean Sea, thus ending the deception.

This uncommon larval form is a distinction of eels, though the tarpon and ladyfish share this early lifecycle stage as well, suggesting a possible common ancestor. Eels have other characteristics that set them apart, too. They are Anguilliformes, a type of fish that propels itself underwater by anguilliform swimming, or swimming in a series of undulating waves. Basically, the eel swims using its entire body, whereas most other fish use only their tails for propulsion.

They have a dorsal fin that is continuous with the caudal and anal fin. They have numerous sharp teeth. Their gill openings are usually small and placed behind the edge of a concealed gill cover. Modern eels all lack pelvic fins; many are also without pectoral fins. Most are marine for at least part of their lives, and all spawn in the ocean. They are slippery! Very small, embedded scales (or no scales at all) combined with a robust production of slime give them this memorable trait. Fun fact: the well-known green moray actually has blue skin; a yellow topcoat of slime+algae over the blue skin produces that handsome green color.

The whole slime thing isn't really unique. Most fish have slime covering their bodies. Produced from glands beneath the scales, this mucous serves three main purposes:

1) Osmoregulation: the process by which fish (and other organisms) maintain fluid and electrolyte balance with their surroundings. The amount of slime on the fish's body affects how much water passes in and out. A thinner slime layer allows more water to pass, and a thicker slime layer allows less. This might also contribute to the eel's ability to move from ocean to freshwater, and vice versa.

2) Physical protection. A slippery slime layer helps to suffocate pathogens or parasites trying to enter through the fish's scales and protects any open wounds from further external damage. It also lets the fish slip through barriers, such as coral or your hands, with relative ease.

3) Aerodynamics. Slime fills up the tiny spaces between scales, making the fish more streamlined, much like the way competitive swimmers shave their bodies in order to reduce drag.

Removing an eel's slime will kill it. Many commercial fishermen sprinkle salt on their eel catch to quickly remove the slime and kill the fish. Although eel is a delicacy in many cultures, you should always cook it first. Eel blood is quite toxic.

Eels carry proteins in their blood that are toxic to humans. These proteins are usually referred to as ichthyotoxins, literally "fish poisons." Ichthyotoxins are an old enemy, fisherman having long known that certain fishes have to be heated before they are safe to eat. Proteins are made of long chains of amino acids that fold together in a specific way that defines their shape and, to a very large extent, their function. Enough heat unfolds the proteins and renders them harmless, so you are fine eating cooked eel.

Fun fact: Charles Robert Richet used the toxin derived from eel blood in his Nobel winning research that discovered anaphylaxis (an exaggerated allergic reaction to a foreign protein resulting from previous exposure to it).

Now that we've nailed down what an eel is, it's time to learn what is not. Electric eels, for instance, are not eels. Electric eels spawn in fresh water, have no teeth, have no dorsal fin, and are air-breathers (supplemental to gills). They're just a wannabe from the knifefish family. Slime eels are also not eels. Forget not having teeth; these guys don't even have jaws! Though, they can produce massive amounts of slime...

The eel is its own very peculiar fish, with an imperfectly understood life cycle. All spawn in saltwater. Freshwater eels, such as the American eel and the European eel are thought to travel as far as the Sargasso Sea (middle of the North Atlantic) for spawning. The leptocephali larva drift with the currents as they mature into their next phase: glass eels, another totally transparent form. Glass eels are often found in coastal areas and estuaries. They then grow into pigmented young known as elvers. In freshwater species, this is the stage where they migrate upriver, often over very long distances, and enter their final juvenile stage: yellow eels. They may live for over ten years before morphing into silver eels for their return journey, to spawn and die in the waters where they hatched. Some species spend almost their entire lives in fresh water while others spend their entire lives at sea. Since the spawning process is a mystery, biological information about the early life of eels is primarily conjecture.

The large diversity of existing eels is poorly known. Worldwide, there are over 700 species, some known only by a single specimen. In our mind's eye, we see the reputation that has been shaped by the sport and resultant table fare of freshwater eels and by fearsome tales of morays attacking divers on coral reefs. However, eels are actually quite secretive in all of the varied types of habitats where they reside. These habitats include lakes, streams, estuaries, coral reefs, and the deep sea, but most live in shallow tropical or subtropical marine habitats.

On the Texas coast, and in the Gulf, there are over 30 species of eel, some only six inches long; some up to seven feet! The best key I found was Saltwater Fishes of Texas: A Dichotomous Key, Second Edition (the McKee Key), prepared by M. Shane Merryman, Kenneth C. Rainer, David A. McKee, and Edward O. Murdy. Also a good book, Fishes of the Texas Laguna Madre: A Guide for Anglers and Naturalists, by David A. McKee, has more detailed descriptions for some of the common species. For technically accurate line drawings, consult Edward O. Murdy's 1983 book, Saltwater Fishes of Texas. For photos, check out Fishers of the Gulf of Mexico, Texas, Louisiana, and Adjacent Waters, by H.D. Hoese and R.H. Moore.

Though not the most common, I think the most unusual family found in our waters is the snipe eels. Sometimes called a threadfish (despite there being an actual threadfish that is not a snipe eel), the slender snipe eel resembles a long piece of ribbon or string with a large bulbous head at one end. It's sometimes also called the deep sea duck, but it is not in the duckbill eel family, either. These guys can really rack up the misnomers. Fun fact: the snipe eel has more vertebrae in its up-to-five-foot-long body than any other animal on Earth. Its body is so slender that it is actually 75 times as long as it is wide, yet it weighs only a few ounces.

But the real eye catcher is the beak. The snipe eel's upper and lower jaws are quite long and curve away from each other at the tips, so they don't meet when the eel closes its mouth. If you didn't know better, you'd probably think it was a deformity, but these curved jaws have a special purpose. They are covered with tiny hooked teeth that snag the antennas of small shrimp and other crustaceans as the eel swims along vertically with its mouth open. At maturity, both sexes lose their teeth, although only males lose them all. But no matter. Snipe eels are thought to be semelparous, meaning they mate once and then die immediately. No dentures needed.

The most common eels in Texas bays belong to the snake eel family. Snake eels have virtually no fins, giving them a striking resemblance to their family namesake: snakesand worms. Their pointed snouts and tails are used to burrow backwards beneath the sand. They can usually be found with just their head showing above the sand, waiting for their prey; a few species prowl the sands at night. Some, such as sharptail eel, mimic banded sea snakes and can be found in the open during the day.

The speckled worm eel (a snake eel) is one of the most common eels found in Texas bays. These guys seem to favor the grass flats in the upper Laguna Madre, but they do live all along the Texas coast and into the Gulf, from mangrove swamps to offshore reefs. The upper body surface is profusely peppered with black spots, and the snout is pointed when viewed from above. Also, they are adorable.

There are other common eels to be found, but for my last act, I have to talk about Ophichthus rex, the King Snake Eel. This is the seven-foot eel. Hangs out around oil rigs. Reputed to have "nasty sharp teeth." Supposed to be great table fare. Will chase feet if pulled on board. Will still be alive and up for round two when you get to the dock. State record: 52.00 lbs, 86.50 inches; Patrick Lemire, Texas City, Gulf of Mexico; February 11, 1997. I can absolutely see this eel inspiring myths and legends. Who wouldn't expect a coconut tree to grow if you planted its head?


Where I learned about eels, and you can too!

Fishes of the Texas Laguna Madre: A Guide for Anglers and Naturalists
By David A. McKee