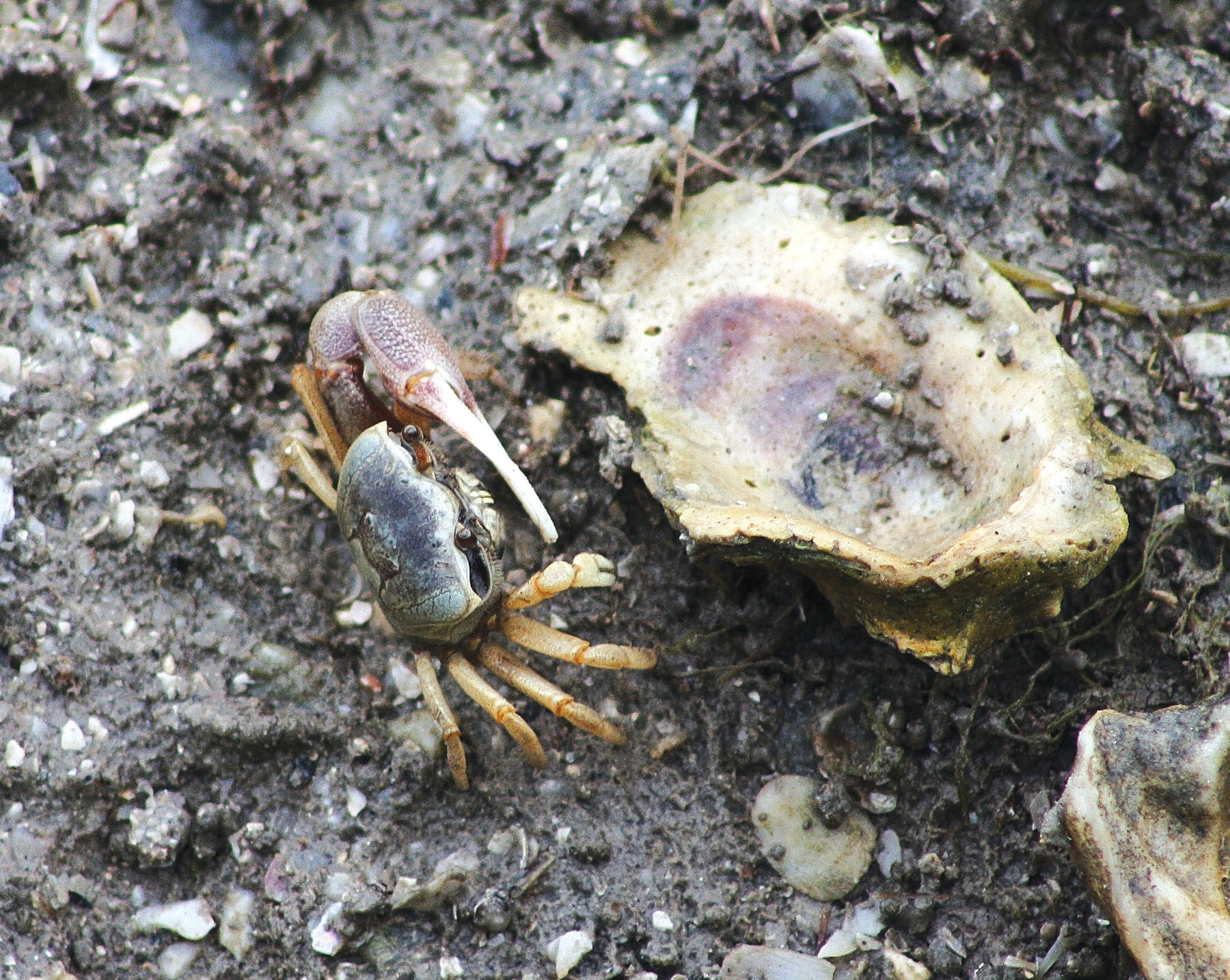 Photo credit: Tripp Davenport
As I revisited my high school in last month's article, it's only fair I pay tribute to my middle school as well: the Fiddler Crabs. Uca rapax, the mudflat fiddler crab, is a small, semi-terrestrial crab characterized by a thick, squarish body; a reduced tail fan; tall, stalked eyes set close together; sideways movement rather than backwards or forwards; and extreme claw asymmetry in males (females' claws being equal in size).(1) The shell of U. rapax is one to two inches in length and light tan or occasionally greenish blue. Most individuals' claws are gray to greenish-yellow, sometimes with orange or white tips; females and males are similar in color.(2)

Fiddler crabs are one of the most conspicuous tenants of marsh and intertidal zones and are often seen foraging in large groups when the tide is out.(2) They can be found in soft sand or mud, this being good substrate for digging burrows and finding food. Fiddlers burrow for mating, avoidance of extreme temperature and floods, and escape from predators. During high tide, they clog burrow entrances until the tide recedes.(3) Most burrows are L-shaped with a single entrance. As burrows are excavated during low tide, fiddlers push sediments to the surface in small balls. Sand or mud pellets piled around the entrance to a burrow means it's someone's home.(1)

Fiddlers have a "musical" mating ritual. Males line up beside the burrows they've dug and move their large claws back and forth in a fiddling motion to attract females. In Spanish, the fiddler crab is called cangrejo violinist, literally "violinist crab."(3) While no string repertoire accompanies this display, it is not silent. Males produce acoustic drumming with their claws and legs to further entice the passing females. Displays can include over thirty distinct moves and can last up to thirteen seconds each. If a male catches a female's eye, he will tap the ground with his claw, and if she is amenable, she will follow him into his burrow to mate. There she will remain for about two weeks until her eggs are ready to release. Female mudflats can carry up to 30,000 eggs at a time; once they've hatched, she releases the larvae into a large nocturnal ebb tide which transports them to Gulf waters, away from estuarine predators. The young pass through a number of planktonic larval stages, similar to the blue crab's development. As they mature from drifting zoeal to free-swimming megalopae and finally to juvenile crabs, they travel back to the estuary and look for settlement cues, such as established neighborhoods of their species. Once they've claimed a territory, the life process begins again; a mudflat fiddler lives about 1.5 years.(1)

As the male fiddler matures, the weight of it's large claw changes from 2 percent to 65 percent of its total body weight. Either claw, right or left, can become the characteristic large claw, and the percentage in a population is usually about 50/50 (unlike the disproportionate percentage of left-handed vs. right-handed humans). In all fiddler species, fights between males of the same handedness differ from those between opposite-handed males. Just imagine arm wrestling between two right-handed men vs. a right-handed man and a left-handed man. It may be easier for different handed (or clawed) fiddlers to judge each other's size, but it's probably easier to interlock claws when they face in opposite directions.(2) As you can surmise, claws aren't only used to attract females, but also in territory disputes with other crabs. Territory includes one's burrow and possibly some surrounding land. How much surrounding land depends on how many neighbors you have. Scuffles between male neighbors can range from no contact at all to use of the large claw in pushing, gripping, and/or flipping of opponents. These fights usually arise during attempted home invasions or between males of similar size for mating rights.(1)

Like other crabs, fiddlers molt their hard exoskeleton to grow larger and/or to replace missing limbs. To escape predators, fiddler crabs can autotomize, or spontaneously and purposefully cast off a body part. New limbs grow in a folded position under the shell until the next molting. Multiple autotomy or the removal of eyestalks can trigger an unscheduled molt. Under these conditions, the crab may even decrease in size as energy is used to replace several missing limbs.(1) If a male's large claw is lost, he will soon regenerate a new one, but in the meantime, the remaining claw grows larger. Other factors that affect molting include food abundance, temperature, and pollution.(3)

Though sometimes cannibalistic, the fiddler crab mainly subsists on a diet of detritus, bacteria, and algae. The small claws transfer sediment to the mouthparts where edible material is cleaned off sand and other undesirable particles. As the male has only one small claw, he must work twice as hard as the female to get the same amount of nutrients. The foodstuffs are swallowed while the remaining sediment is rolled into tiny balls and deposited back on the ground. These balls are much smaller than those created during burrow excavation. The mouthparts of each fiddler species are specialized for a specific size range of sediment, thus partially influencing the local habitat selection of a population and the geographic distribution of a species. The mudflat fiddler is adapted for medium-sized sediment and will wander about 6.5 feet from its burrow in the act of foraging.(1)

Though not economically important per se, the fiddler crab is the most common crab in a salt marsh community and fills some important ecological roles. Fiddlers are scavengers, eating detritus and cleaning up after the local populace, and are themselves food for many wetland species including herons, egrets, raccoons, blue crabs, fish, turtles, etc. In their burrowing, they aerate soils; bring organic matter to the surface, inducing microbial growth; and stimulate the turnover and mineralization of nutrients, creating favorable conditions for marsh grasses and underwater seagrass meadows.(3) Their population densities are an indicator of productivity in coastal marshes and wetlands. They are also good indicators for pollution, especially pesticides, as they concentrate such toxins as polychlorinated biphenyls and Dieldrin, which can result in impaired locomotion and reduced populations. Fiddlers are also sensitive to heavy metals, such as mercury, copper, and zinc, all of which are toxic to fiddler crab larvae and can cause significant developmental delay and deformities.(2) In addition, the contaminants can be passed along in the food web when the crabs are preyed upon by fishes, birds, and small mammals. Just like the old domino effect, an inevitable total collapse…

As you know, sometimes the small and common play big roles, and really, what fun would it be to walk through the wetlands without scattering crowds of fiddlers?