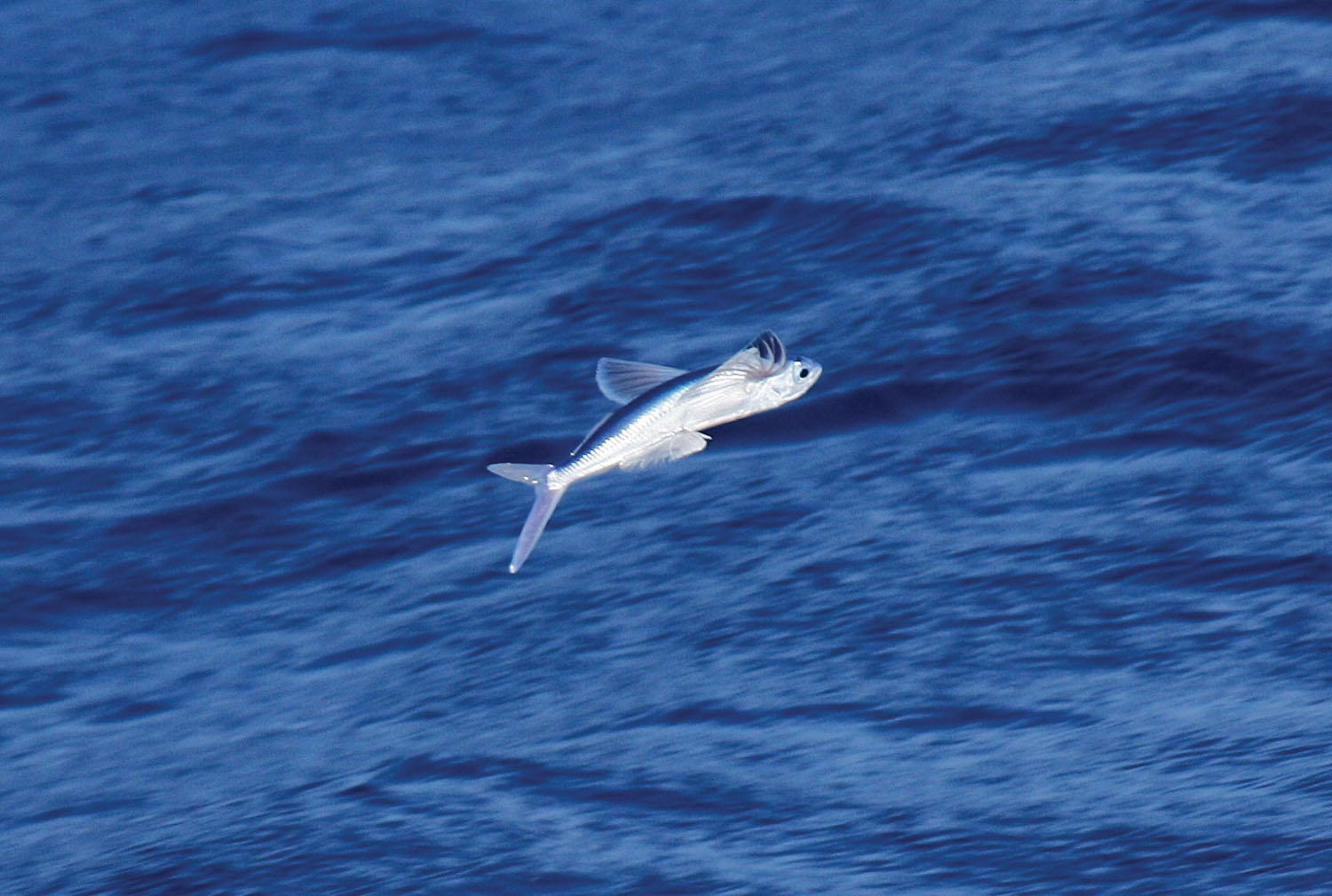 One cannot look at the sea without wishing for the wings of a swallow.
~ Sir Richard Burton, a Victorian explorer, writer, and translator, known for his travels in Asia and Africa

Powered flight has evolved only four times in the animal world: insects, pterosaurs, birds, and bats. But powerless flight (i.e. gliding and parachuting) is utilized by a myriad of creatures. Flyingfish are one of the more sensationalized members of this group, understandably. Fish are one of the last animals you would expect to see in the air, though they are not the only gliding denizen of the deep (but that's for another time). Flyingfish belong to the family Exococetidae, from the Greek meaning to lie down outside. The connection escapes me Exococetidae is divided into seven genera containing (depending on different definitions) 45 to 64 species. Our own local flying fish is Cheilopogon melanurus, the Atlantic flyingfish (though a handful of flyingfish species share this common name). Cheilopogon is from the Greek meaning barbed lip, and melanurus is from the Latin meaning black-tailed.

If their beautiful "wings" aren't enough to identify them, another characteristic of flyingfish is an uneven and deeply forked tail, with the lower lobe longer than the upper lobe. Many species also have enlarged pelvic fins (in addition to the winged pectoral fins) and are known as four-winged flyingfish. C. melanurus is one of these. When landing, flyingfish can hit the water at high speeds, so they have a hard lower jaw to protect their mouth, and in some species, the lower jaw is also much larger than the upper jaw. Flyingfish reach up to 18 inches in length, but average only 7 to 12 inches. Relative to their body size, the eyes of flyingfish are quite large, and flat. This gives them good vision both in and out of water. Juvenile flyingfish do not resemble adults. They have a colorful appearance and long whiskers at the side of their mouth that camouflage them as plant blossoms. Their markedly different appearance from adults has led to confusion among scientists as to the actual number of flyingfish species.

Like most flyingfish species, C. melanurus has an elongate body that is iridescent blue above and grayish-silver below. Pectoral fins are extremely long, reaching past the dorsal fin, with a distinctive color pattern: a dark base and outer rays with a lighter triangular band in the middle. Young Atlantic flyingfish up to 6 inches in length have transparent pectorals. Adult C. melanurus can reach up to about 16 inches in length, but is more common around 10 inches.

Much remains unknown about how modern flyingfish developed their gliding abilities, but fossils from a now-extinct family of flyingfish may hold the answers. In 2009, scientists in China excavated bones from a marine fish named Potanichthys xingyiensis, meaning winged fish (Greek) from Xingyi (the city near where the fossil was found). The fish lived about 235 to 242 million years ago, the Middle Triassic, and was apparently capable of gliding just like modern flyingfish. It had greatly enlarged pectoral fins and an uneven / deeply forked tail. Modern flyingfish (Exococetidae) are not descendants of this species, however. All of today's flyingfish are closely related to one another, and as a family aren't much older than bats, having evolved perhaps 65 million years ago. P. xingyiensis's ancient lineage, family Thoracopteridae, evolved the ability to glide independently over 240 million years ago. Understanding how the thoracopterids evolved could help explain the evolution of gliding in modern flyingfishes.

In 2014, scientists (also in China) unearthed the oldest and most primitive thoracopterid discovered yet, Wushaichthys exquisitus, meaning exquisite fish from Wusha (the town where the fossils were found). The roof of W. exquisitus's skull was broad, as seen in later thoracopterids, but it lacked the bottom-heavy tail and wing-like fins, and was also covered in scales, unlike more advanced species of its lineage. Based on P. xingyiensis, W. exquisitus, and other thoracopterid fossils, scientists have suggested that the development of gliding was a gradual four-step process. First - broad, flat skulls evolved in fish that successfully swam and fed just below the ocean's surface. Second - a specialized tail fin, with a larger lower lobe, appeared that increased power when jumping out of the water. Third - the characteristic wing-like fins evolved that allowed the thoracopterids to optimize the effectiveness of their jumps, by gliding. Fourth - body scales disappeared, which improved aerodynamics. In light of the similar body shapes between extinct thoracopterids and living exocoetids, parallel evolution seems likely.

Their streamlined torpedo body shape helps flyingfish gather underwater speed in preparation for a jump and reduce drag while gliding. The process of taking flight begins by gaining velocity underwater, up to 37 miles per hour, by enthusiastically vibrating their tails more than 50 times per second. Angling upward, the fish breaks the surface and propels itself into the air with its tail, which is the last part to leave the water. Flyingfish can reach heights of four feet, gliding speeds of 40 miles per hour, and distances up to 655 feet. The tail is the first part to re-enter the water, so once the fish nears the surface, it can either drop back to the water by folding its fins, or it can flap its tail rapidly and take off again. Capable of extending a flight in this manner, flyingfish have been recorded stretching out consecutive glides that span 1,312 feet. It is thought that this mechanism evolved to escape from oceanic predators, but once in the air, they sometimes fall prey to birds. Some birds, boobies in particular, have learned to hunt them by hovering over the bow of a ship and swooping down to catch the fleeing flyingfish that are trying to escape the ship. Flyingfish are prey to almost any ocean dweller larger than them, but are especially preferred by mackerel, tuna, swordfish, marlin, and dolphins. For their own sustenance, they feed most actively at night at the surface of the water, subsisting mainly on plankton, small finfishes, and crustaceans. Some species can also scoop up prey with their extended lower jaw while gliding.

Not only do they feed in warm surface waters, but that's also where they live, in general. Though they are oceanodromous (meaning they complete their entire life cycle in salt water), they are often found near shore, and young flyingfish often swim in harbors or bays. Spawning takes place in the open ocean. Mating season occurs when ocean currents are weakest. Depending on the region, this may transpire during spring or autumn. Some species spawn in huge numbers, exceeding a million individuals. Females lay their eggs in floating debris, often sargassum seaweed. The eggs are either buoyant or secured to the seaweed by long, sticky filaments. The fry are planktonic, orange, and resemble sargassum berries. Juveniles have long whiskers around the mouth resembling the flower produced by plants in the Barringtonia genus. The average lifespan of flyingfish in the wild is five years.

While our local flyingfish, C. melanurus, isn't fished commercially or recreationally, other species in different parts of the world are a staple in commercial fisheries. Flyingfish are commercially fished in Japan, Vietnam, and Barbados by gillnetting and in Indonesia and India by dipnetting. Flyingfish are attracted to light, like a number of sea creatures, and fishermen in the Solomon Islands take advantage of this with substantial results. Canoes, filled with enough water to sustain the fish, but not enough to allow them to propel themselves out, are affixed with a luring light at night to capture flyingfish by the dozens. They can also use torches to entice the fish to jump out, and then catch them in midair with nets.

Historically the country of Barbados was nicknamed "The Land of the Flying Fish," and it is still the official national fish for the country. The once-abundant flyingfish migrated between the warm coral-filled Atlantic Ocean surrounding the island of Barbados and the plankton-rich outflows of the Orinoco River in Venezuela. However, just after the completion of the Deep Water Harbor in Bridgetown, Barbados saw an increase in the number international ships, and as a result, the overall health of the coral reefs surrounding Barbados declined from pollution. Additionally over-fishing took a heavy toll on flyingfish numbers, and they are abundant no longer. Today, there are laws in place that protect flyingfish from being overfished, allowing enough fish to survive to ensure future generations of the animal. Imageries of flyingfish are still found on Barbados currency, the national seal, stamps, promotional material, and passports. It is also the national dish.

Similar to Barbados, Taiwan and other Asian cultures place a high value on the flyingfish. Not only is the fish considered a delicacy and heavily fished in Asian waters, but it is also revered in culture with festivals and celebrations. Some calendar seasons even revolve around the migration of the flyingfish. Though overfishing has certainly occurred in some areas, the IUCN Red List lists them as "Least Concern." Their conservation status is stable.

When once you have tasted flight, you will forever walk the earth with your eyes turned skyward, for there you have been, and there you will always long to return. ~Leonardo Da Vinci

Where I learned about flyingfish, and you can too!