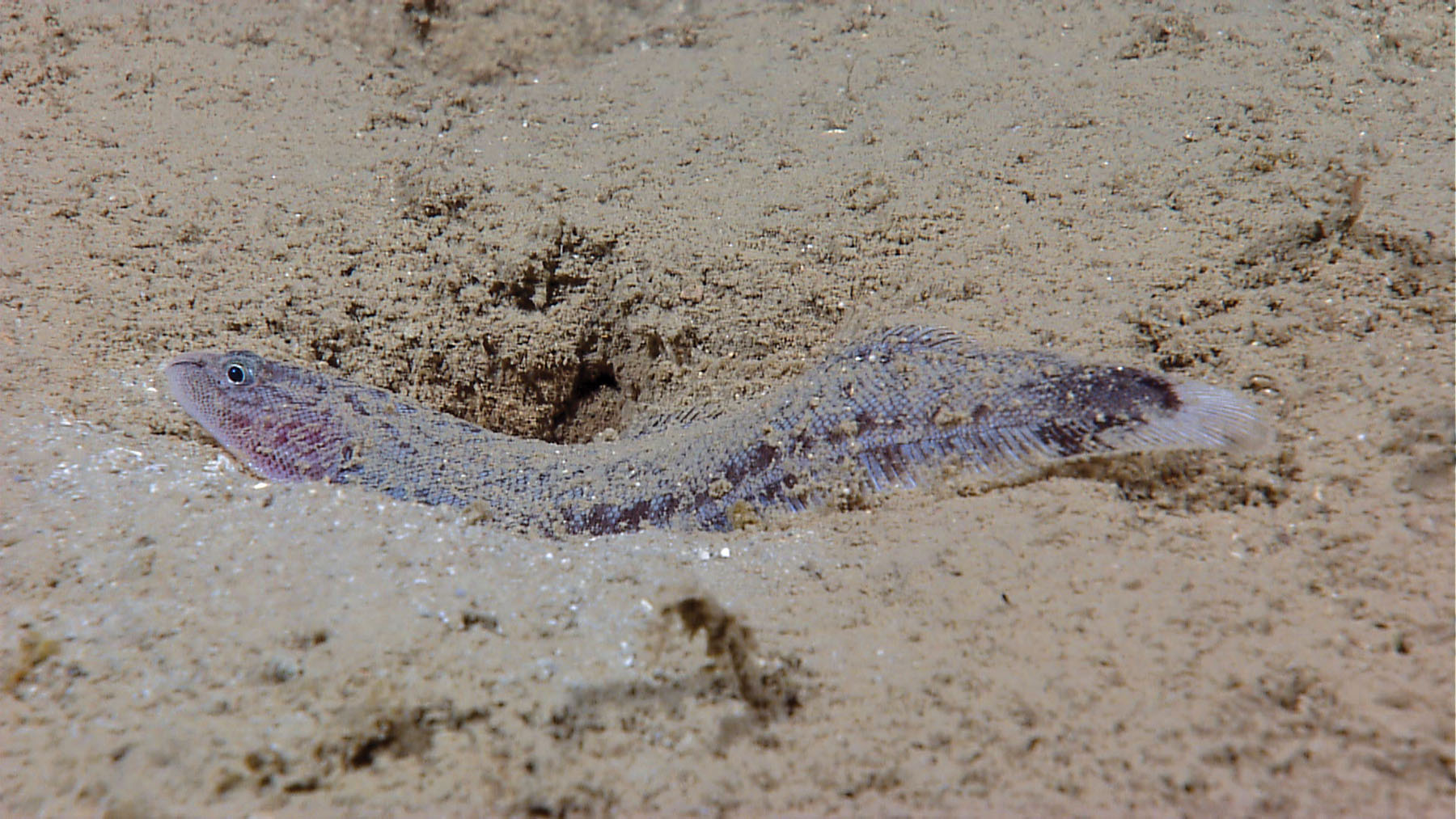 Tonguefish, like the more-familiar flounders and soles, belong to the order of flatfishes, Pleuronectiformes. These highly compressed, carnivorous fishes are small to medium in size. Flatfishes usually inhabit shallow, soft sediments on the continental shelf, though some species are found at much greater depths. They are a rather homogenous tribe, united by three traits derived from a common ancestor: 1) cranial asymmetry, 2) forward placement of the dorsal fin over the head, and 3) presence of the recessus orbitalis, a muscular sac-like outgrowth that allows the protrusion of the eye, enabling them to see their surroundings while concealed. They also differ from other bottom-dwelling fish in that they do not lie on their belly but on one side, right or left (which side depends on the family). The side of the fish that hugs the bottom is referred to as the "blind" side. It is usually whitish but can exhibit colors and patterns. On the "ocular" side, some species, especially the flounders, are capable of a rapid changes in coloration, allowing them to match their background almost perfectly. Flatfishes are found on a variety of substrates including silt, mud, sand, sand-shell mixtures, and rocky or pebbly bottoms. Some species appear to have strong preferences for particular substrates; others are less picky. As bottom-dwelling predators, they are usually found either lying on top of the substrate or partially buried in sand or soft mud, with only their eyes protruding. Some of the larger species will rise off the bottom to capture prey.

The development of young flatfish repeats, to some degree, their probable evolutionary process. The newly hatched, transparent larva is bilaterally symmetric and free-swimming. At this point, it is no larger than a pinhead, but before the larva reaches one inch, the characteristic compression of the body develops, and one eye "migrates" to the other side of the head. For some species, this will be to the right side; for others, including tonguefishes, it will be to the left. This signifies the end of the pelagic larval stage, and they settle to the bottom of the sea floor. Besides the migration of the eyes and the compression of the body, other changes occur in the skeletal and digestive systems, including the loss of the swim bladder. They don't need to float around, after all. The mouth retains its original position, more or less, so that it is often described as opening sidewise. Adults finish up with only one dorsal and one anal fin, both without spines.

Among the family of flatfishes (Cynoglossidae), tonguefishes are distinguished by their characteristic tear-drop shape and the presence of a long hook on the snout overhanging the mouth. The largest species reaches a length of 26 inches, though most grow no longer than about 12 inches. The ocular side is usually a uniform brownish or greyish, often marked with varying patches, spots, or cross bands; some species sport blotches and spots on the fins. The blind side is primarily whitish or yellowish in most species, though some also have small indistinct cloudy patches or darker spots. They are found in tropical and subtropical oceans, mainly in shallow waters and estuaries at lower latitudes, though a few species are found in deep sea floors, and a few in rivers. They spawn chiefly during summer. Eggs are spherical. Adult tonguefishes have little to no commercial value. Some are harvested for food, but most are too small to bother. The few species that are harvested can be found in high-class French cuisine and Japanese sushi. Apparently, tonguefish is low in calories and a good source of vitamin B12 and niacin. For now, they have more scientific value than table fame. One species of tonguefish, Symphurus thermophilus, lives around "ponds" of sulphur at hydrothermal vents on the seafloor. No other flatfish is known to live near hydrothermal vents. The mechanism that allows the fish to thrive in such a hostile environment is a subject of research, though they are thought to graze on the bacterial mats created near the warm nutrient flows. Somehow, these fish survive in toxic sulfuric pools that are boiling hot – and don't seem to die, or even mind.

The most common (and perhaps the only modern) genus of flatfishes found in the Gulf is Symphurus, from the Greek syn = grown together, and oura = tail. Most species in this genus occur mainly in shallow waters, such as estuaries, though some are found in deeper water, such as S. thermophilus, mentioned above. Symphurus species are distinguished by merged dorsal, caudal, and anal fins; the absence of a lateral line and pectoral fins; and the presence of only one pelvic fin. The largest species reaches 12 inches long. There are 14 Symphurus species found in the Gulf, according to the World Register of Marine Species (WoRMS). Eight of those species can be found in Texas bays or along barrier island Gulf-facing coastlines. The most common, by far, of those eight species is Symphurus plagiusa, the blackcheek tonguefish. It is also the only species found in the bays. The other 7 are along the barrier islands. How much more common is the blackcheek? According the the Ocean Biogeographic Information System (the occurrence map used by WoRMS), there are 14,251 occurrences of the blackcheek tonguefish in the Gulf. The next most common is the offshore tonguefish, with a measly 79 occurrences.

Blackcheeks are rare among the tonguefishes in that they inhabit estuarine environments in the seasonally dynamic region of north temperate latitudes, whereas most other flatfishes occur only in the tropics. This makes them a good candidate for age and growth studies, according the Virginia Institute of Marine Science, which conducted just such a study in Chesapeake Bay during 1994-95. Fish are aged by the rings of growth on their ear bones, sort of like rings on a tree. But flatfish in the tropics are difficult to age from these bones because environmental constancy (i.e., lack of seasons) makes the rings hard to count. Blackcheeks living in environments with wider temperature fluctuations between seasons have more distinct rings.

This species is very abundant on soft mud and sand bottoms in coastal lakes and bays in Texas, out to about 120 feet of water. The ocular side is brownish with darker, mottled brown vertical bands and a dark blotch on the upper part of the gill cover. They can grow just under nine inches long and reach five years old. Their diet consists mainly of small benthic invertebrates, such as small crabs, polychaetes, copepods, amphipods, and ostracods (aka seed shrimp).

The tonguefish does have a "tongue," but not in the same way you do. Your tongue is a muscular organ. The tongue of a fish is formed from a fold in the floor of the mouth. However, fish do have tastebuds, just like you. Fish tastebuds can distinguish between sweet, sour, salty, and bitter. Unlike you, fish have tastebuds not only on their tongues, but on the outside of their bodies, too. This means they can rub up on something to check its edibility which sounds cool, but sometimes I'm really glad my hands can't taste.


Where I learned about tonguefish, and you can too!