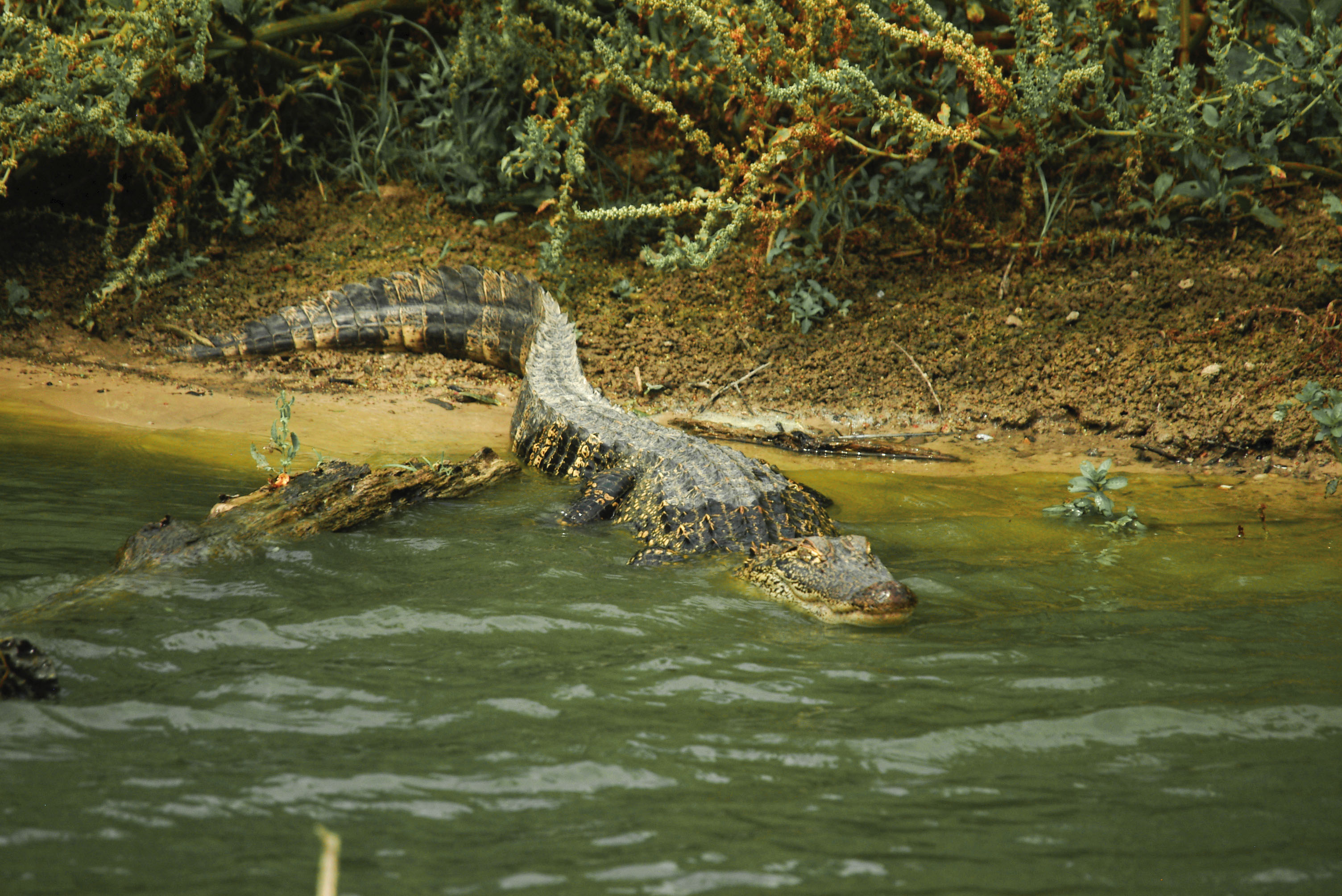 Alligators and humans have shared the marshes, swamps, wetlands, rivers, and lakes of North America for many centuries. They are present in the stories of many Native American cultures, such as a Choctaw legend in which an alligator shares hunting wisdom with a hunter who saves the alligator's life. There are even more modern myths of alligators living in sewers, a less than glamorous role. One species is responsible for every alligator tale ever imagined in North America: Alligator mississippiensis.

The American alligator is the only member of the order Crocodylia occurring in North America. This order used to refer to both living crocodylians and extinct crocs dating back to the Triassic period (circa 245 million years ago). Recently, it was restricted to include the last common ancestor of the twenty-three living species of alligators, caimans, crocodiles, and gharials (going back about 80 million years) and all of its descendants.(1) The family Alligatoridae appeared roughly 35 million years ago. Today, there are only two species of alligators in the world: the American alligator and the Chinese alligator (Alligator sinensis).(2) Spanish sailors arriving in America thought the unfamiliar reptile was a huge lizard and imaginatively dubbed it… el lagarto, "the lizard." English sailors took up the name with their own flourish and called it allagarter. Eventually, it has evolved into the now well-known alligator.(3)

A. mississippiensis is the largest reptile in North America. In the wild, females typically reach eight or nine feet; males about twelve or thirteen feet. While in captivity their lifespan can be as long as sixty years or so, in the wild, it's usually only half that. Adults are very dark brown to black on top and off-white on the underside. Juveniles sport yellowish cross bands over their black/brown tops that fade with age. A gator has 74-80 teeth in its mouth at a time. They are continually replaced, and a gator may go through 3,000 teeth in its life. The front feet have five toes each, and the webbed hind feet have four.(4) Like other reptiles, alligators are ectotherms (cold-blooded), meaning they assume the temperature of their surrounding environment rather than regulating their body temperature like birds and mammals. Unlike other reptiles, crocodylians have four-chambered hearts, a trait shared with birds and mammals. It is thought that the increased mixing of oxygenated and deoxygenated blood by a four-chambered heart enables crocs to dive for extended periods. This particular heart structure has led some scientists to theorize that crocodylians might have a common endothermic (warm-blooded) ancestor.(5)

Formerly an endangered species, the American alligator showed a remarkable comeback and was delisted in 1985. It is now classified as a protected game animal in Texas and cannot be hunted or collected without a special permit from Texas Parks & Wildlife. The species is also still federally listed as threatened because it looks like the American crocodile, which is endangered. Though there are a number of differences between alligators and crocodiles, the easiest way to distinguish between the two is their teeth. When its mouth is closed, the alligator's fourth lower tooth does not show (actually, most of the bottom teeth don't); the crocodile's does (and so do most of its other lower teeth). So is an alligator a specialized crocodile, or is it the other way around? Neither, in fact, they're both specialties of a common ancestor. The skull of a middle-Cretaceous crocodylian found in central Texas displays the alligator-like overbite towards the back of the jaw but the fourth lower tooth passes through a notch in the skull, just like a crocodile. Alligators lost the notch; crocodiles lost the overbite.(1)

The original range of A. mississippiensis extended as far north as New Jersey, southward to the South Atlantic and Gulf Coasts, inland to the merging of the Arkansas and Mississippi River, and westward along the Texas coast. Today, the alligator's range extends east to the Carolinas, west to Texas, and north to Arkansas.(6) Though they venture into salt water, they are better adapted for fresh and brackish ecosystems as they don't have salt glands to filter out extraneous salt intake.

Gators in Texas breed once a year. Courtship begins in early spring with lots of bellowing, head-slapping on the water surface, body posturing, snout and back rubbing, bubble blowing, and pheromone signaling. Most of all of this is done by the male, both to impress the females and warn off other males. The females make their respective choices, and by late June, most of the males are back to guarding territory while the females begin their one- to two-year maternal duties. First up is nest building. The female constructs a large nest, usually on the water's edge, of vegetation and mud. When complete, the female digs out a conical section from the top, lays anywhere from twenty to seventy cylindrical eggs, and covers the eggs up. The female will remain close during the incubation period, which is approximately sixty-five days, depending on local conditions, such as temperature. Temperature is also what determines the unhatched alligators' sexes: above 93° F produces males, below 86° F results in females, and temperatures in between produce both sexes. When the young alligators begin to hatch, they emit high-pitched chirps from inside the egg. This signals to mama to start breaking apart the now-hardened nest. As they hatch, she carries groups of them in her mouth down to the water's edge. The hatchlings form pods, sometimes including young from other females. Though mama won't feed her young, she will protect them for up to two years, but even with her fierce vigilance, only twenty percent will survive to maturity. American gators are sexually mature when they reach about six feet in length, which, depending on living conditions, is reached anywhere between six and ten years. When a gator reaches about four feet, the only predators it has left are other gators and humans.(3) Most of its predators as a youngster are now its prey.

Alligators are carnivorous and choose their prey mainly by size and availability, which means anything smaller than they are (and even some things that are larger) is fair game. They'll eat fish, frogs, birds, turtles, insects, snails and other invertebrates, snakes, small mammals, other alligators, white-tailed deer, wild hogs, and sometimes people's pets. They primarily hunt at dusk or during the night. Though they can move quite fast on land and in water, they are ambush predators and only use such speed in short bursts to surprise prey, defend territory (including, especially, nests), and retreat from predators. A flap in the gator's throat enables it to catch prey in the water without letting water into the lungs. Small prey is swallowed whole. Larger prey is stashed at the water's bottom so that it can be later torn into manageable chunks. Alligator teeth are designed for crushing and for a strong grip on prey. They aren't sharp teeth for tearing meat.

Due to their ectothermic nature, crocodylians don't have to eat as often as their warm-blooded counterparts. During the winter, they may not eat all all, preferring to hole up in "gator dens" they dig out of the mud.This infrequent feeding leaves lots of time for patrolling territories, garage sales, Monday night football, and sunbathing. To raise their body temperature, alligators bask on the banks of water bodies in the sun, where they are often observed by tourists and passersby. On hot days, they may be seen basking with their mouths open. This serves the same cooling purpose as a dog panting.(7)

Most anyone in "gator country" could tell you that if you approached sunbathing alligators, the gators would make a hasty retreat to the water, just like turtles off a log. Wild gators have a natural fear of humans, like almost all other wild animals, and most people can live alongside gators with no confrontations. It is extremely rare for alligators to chase people, but they can move quite fast for short distances, so you should never make the mistake of thinking a gator is slow or lethargic. A female protecting her nest or young can be very dangerous, and you should never approach pods of baby gators or anything appearing to be a nest. Males will be more aggressive during courting seasons. An alligator on land with no quick retreat to water will hold its ground when approached. A gator that deems you are too close may hiss (a sign to make a slow back away). Gators commonly pursue top-water lures (they are attracted to them for the same reason the fish are). These are all normal wild reactions and well within the expected behavior of wild gators. However, there are occasions when an alligator becomes a "nuisance." If you walk near the water, and an alligator comes straight toward you, especially if it comes out of the water (and it's not a female protecting a nest), it's safe to assume this is a nuisance gator that needs to be reported to TPWD. Gators that repeatedly follow watercraft and are not easily scared away may be nuisance gators, as might be gators that regularly leave water bodies to hang out near homes, livestock pens, etc. These are almost always gators that have been fed by humans, purposefully or inadvertently, and have subsequently lost their fear of humans and see humans as providers of a food source. While some nuisance gators can be relocated, sometimes that is not a possibility. Since, by nature, alligators are territorial, relocating often causes more problems.(6)

Alligators are apex predators in their ecosystems. They fill the important office of population control, but their prey species have other benefits from the gators' presence besides preventing overpopulation. The gator holes dug for retreat from extreme temperatures is used as a watering hole by many creatures and often provides a source of water during drought which would not normally be available. Some species of turtles use the discarded nests of gators to lay their own clutches. We benefit from alligators too, economically. Gators are sustainably hunted and farmed both for their meat and skins in large-scale programs along the Gulf coast. This one species provides a multi-million dollar industry.(8) And as if there ecologic and economic importance wasn't enough, they make great brain fodder for myths and legends.

Here are some fun facts:

• The longest recorded length for an American alligator is 19 feet 2 inches. It was trapped in the early 1900s in Louisiana (and there is some dispute about the truth of this).

• The longest wild alligator harvested in Texas was 14 feet 4 inches. It was taken in Jackson County.

• Alligators are not immune to snake poison, as is commonly thought; however their very tough skin and armored back may prevent snake fangs from penetrating.

• Alligators have very good eyesight, and the position of their eyes on top of their head gives them almost 360° vision. The only place they can't see is directly behind them.

• Young alligators are agile climbers and have been known to climb fences to get to water or escape captivity. Fences should be more than 4.5 feet tall to keep gators from your pets.(2)

• Big gators shy more readily than small ones; that's how they lived to be so big!

• A. mississippienisis is the least aggressive crocodylian.

• Alligator jaw muscles have little strength for opening the mouth, but the muscles that close the mouth have about 300 pounds per square inch.(6)

• Gators communicate territory by head slapping or jaw clapping above or beneath the water. Jaw clapping consists of biting the surface of the water, resulting in a loud pop and splash.

• Adult gators can survive freezing conditions if they are in water. They can submerge all but their nostrils so that when the surface freezes, they can still breathe (known as the icing response). They can even survive eight hours completely submerged in ice without taking a breath.(8)