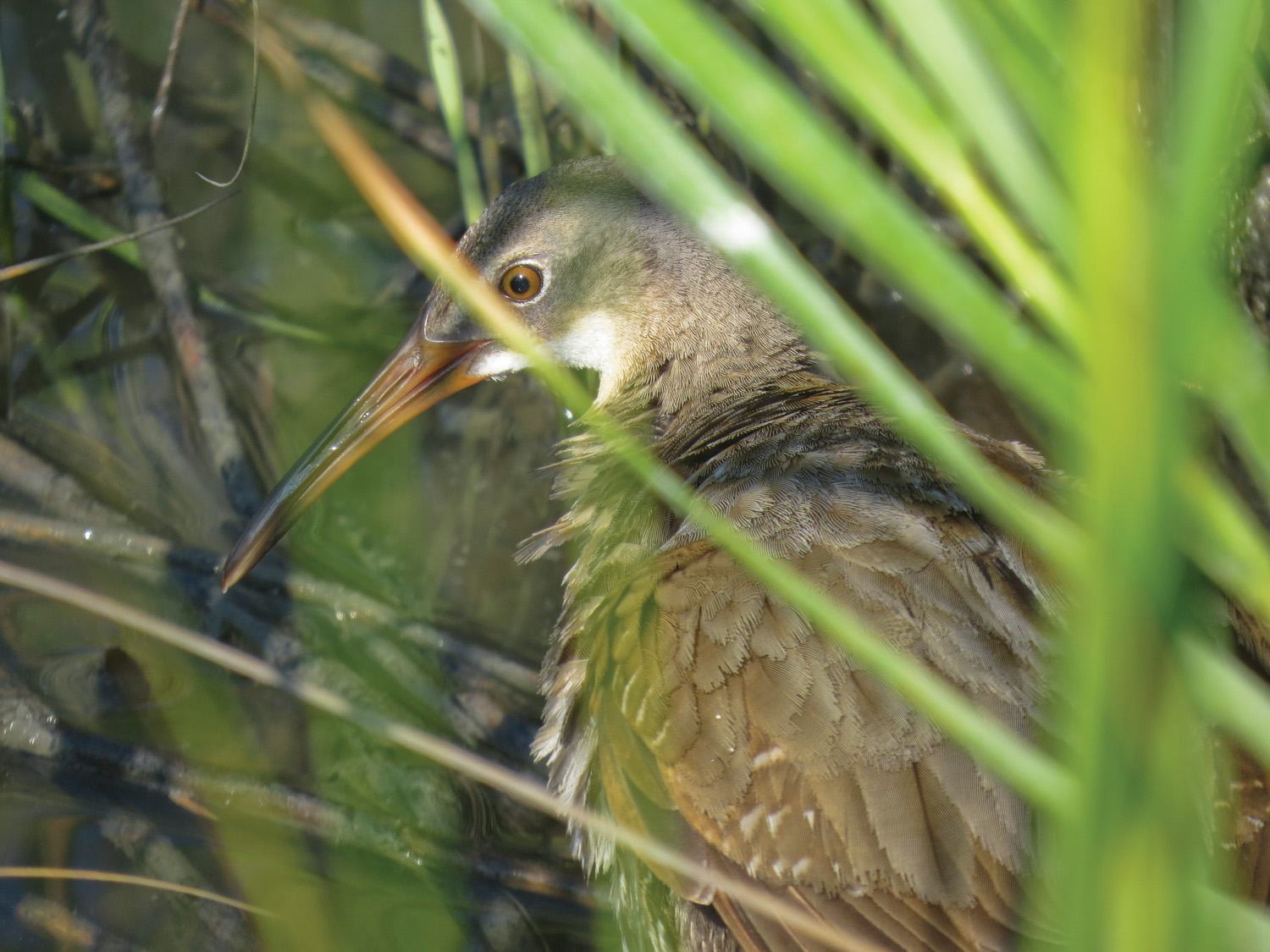 The clapper rail is a medium-sized, chicken-like marsh bird that rarely flies. A member of the rail family, Rallidae, the clapper’s taxonomy is confusing and complex. Many populations of clapper rails are separated by natural or human-caused gaps in appropriate habitats, resulting in species splits and several recognized subspecies. In 2014, the species was split into three: the (original) clapper rail, endemic to the eastern and Gulf coasts of North and Central America, Rallus crepitans; Ridgway’s rail of the western coasts, Rallus obsoletus; and the mangrove rail of South America, Rallus longirostris. Clapper and king rails are also closely related and so similar in appearance and vocalizations that they have, at times, been considered a single species. However, a Ph.D. dissertation in 2012 found a solid genetic distinction between them, and the king rail species has also recently split into two (king rail and Aztec rail). Kings and clappers are known to hybridize where their ranges overlap, spawning the dreaded “cling rail,” a bird not safely identified in the field, even when you can see them (which is not very often).

A characteristic species of salt marshes and mangrove swamps, clapper rails have a compact body, short tail, strong legs, a long, slightly down-curved bill, and rounded wings. The plumage varies a bit geographically, but in general, this species has a gray to reddish back, pale chestnut to rich cinnamon breast, a noticeable white patch under the tail, vertical black/white barring on the flanks, brownish-gray cheeks, and an orangey bill. They reach up to 16 inches in length and weigh up to 14 ounces, males averaging larger than females. These birds prefer low portions of coastal wetlands dominated by Spartina grass, pickle weed, rushes, reeds, mangroves, and other vegetation. Strictly a bird of salt and adjacent brackish marshes and wetlands, the clapper rail is found along the Atlantic coast of the U.S., the Gulf of Mexico, some Caribbean islands, and south through eastern Central America.

Clapper rails are opportunistic and omnivorous. Diet varies with locality and includes mollusks, crustaceans, fish, insects, worms, frogs, eggs, the occasional immobilized small bird, and plant matter. Small crabs are a favorite. Vegetation and seeds are more often a winter meal than summer. Most prey is swallowed whole, the indigestible parts later regurgitated as pellets, though they sometimes wash debris from clams before eating them. Clappers spend much of their time foraging in shallow water or mud, especially during falling or low tides. They stalk slowly and stealthily through dense vegetation, hunting by sight and possibly by smell, sometimes probing in shallow water or mud with their bill. They also have special salt glands that enable them to drink seawater.

These secretive birds live most of their lives on the ground, concealed in dense vegetation. Though they occasionally climb into tall vegetation to investigate, they rarely fly. They often walk in an irregular path, neck outstretched, tail erect (or jerking up and down if agitated). Clappers respond to the alarm calls and behaviors of other species. They may run in response to a threat – body horizontal, holding tail and head straight out. They also swim well and will dive if threatened. A clattering cackle is often the first (and only) clue to the presence of this big rail. Its characteristic loud advertising and territorial vocalizations give the species its name. To humans, this call is about as exciting as listening to a kid repeatedly slapping two sticks together. To female rails, it must be akin to the vocals of Barry Manilow, because it’s the primary method males use to attract mates. Fun fact: a group of rails is called an “applause” or “audience.”

Clapper rails are territorial during nesting season, but may form loose colonies (out of necessity) depending on habitat availability. In Texas, clappers breed from late February to September. Males approach females in courtship displays consisting of either downward-bill-pointing and head-swaying or standing erect with neck stretched and bill open. He may also give gifts of food. Nesting pairs enhance their bond by blending their clatter until they synchronize. Biologists refer to this as a duet. The pair splits incubation and rearing duties, suggesting that this species is monogamous, at least seasonally. Nest site selection is a compromise between high elevation (to prevent nest flooding) with sparse vegetation and low elevation with dense cover and tall grass (to hide). Eggs can survive being submerged in up to 18 inches of water, but it’s not preferable. Nest success depends largely on placement, flooding and predation being equally responsible for nest failures. Males do most of the nest building and may continue to add materials during incubation. Nests are bulky platforms of marsh vegetation (cordgrass, pickle weed, etc.) placed in clumps of grass or shrubs from just above ground level to about 4 feet off the ground. The form is a well-built cup of grasses and sedges about 6 inches in diameter (on the inside) and 2 inches deep, lined with finer/softer materials. Nests may have domes 6 to 8 inches tall for concealment and ramps for easy entry and egress. Males may increase the height of the platform during periods of high water.

Females lay an average of 10 buff/white eggs with brown spots. Both sexes incubate (females during the day, males during the night) for about 20 days. Pairs may re-nest up to 5 times after the failure of a previous nest. After hatching, the semi-precocious chicks, covered in black down, are brooded in the nest briefly and then moved to special brooding platforms allowing the chicks greater access to swimming and foraging. When chicks are about a week old, the parents divide the brood and each look after half. Chicks less than 2 weeks old are carried on the parent’s back during periods of high water or when moving across open water. At 6 weeks old, they are independent of their parents, even though their flight feathers are less than half grown. Flight comes at 9 to 10 weeks. The oldest recorded wild clapper rail was a male who was at least 7 years, 6 months when he was shot in New Jersey in 1977. He had been banded in the same state in 1971.

Clapper rails are widely distributed and historically abundant but secretive, so it’s hard to estimate their population trends. The North American Breeding Bird Survey suggests that numbers declined between 1966 and 2015, and clappers are rated a 13 out of 20 on the Continental Concern Score. However, the North American Waterbird Conservation Plan lists it as a species of Moderate Concern, and the IUCN Red List status is Least Concern. Clappers are most threatened by habitat degradation. Land development that alters vegetation and water levels can cause local population declines. Toxic materials also settle in coastal wetlands, which might compromise the birds. Populations of R. crepitans appear currently stable in the eastern U.S., though the subspecies R. c. insularum has more limited habitat and is listed as Endangered by the U.S. Fish and Wildlife Service. Clapper rails (of the non-endangered variety) are listed as game birds in all coastal eastern states, except New York, from Rhode Island to Texas, but it is unclear whether hunting pressure causes population decline. Like many coastal species, clapper rails benefit from conservation campaigns, such as the Texas campaign, Fish, Swim, and Play from 50 Yards Away! (from nesting birds). By giving them a little space to raise their chicks, we increase their survival rate, and leave a smaller footprint in their population.

“What wild creature is more accessible to our eyes and ears, as close to us and everyone in the world, as universal as a bird?”
~David Attenborough

Where I learned about clapper rails, and you can too!

The Cornell Lab of Ornithology: All About Birds
www.allaboutbirds.org/guide/Clapper_Rail/lifehistory

The Cornell Lab of Ornithology: Birds of North America
birdsna.org/Species-Account/bna/species/clarai11/introduction