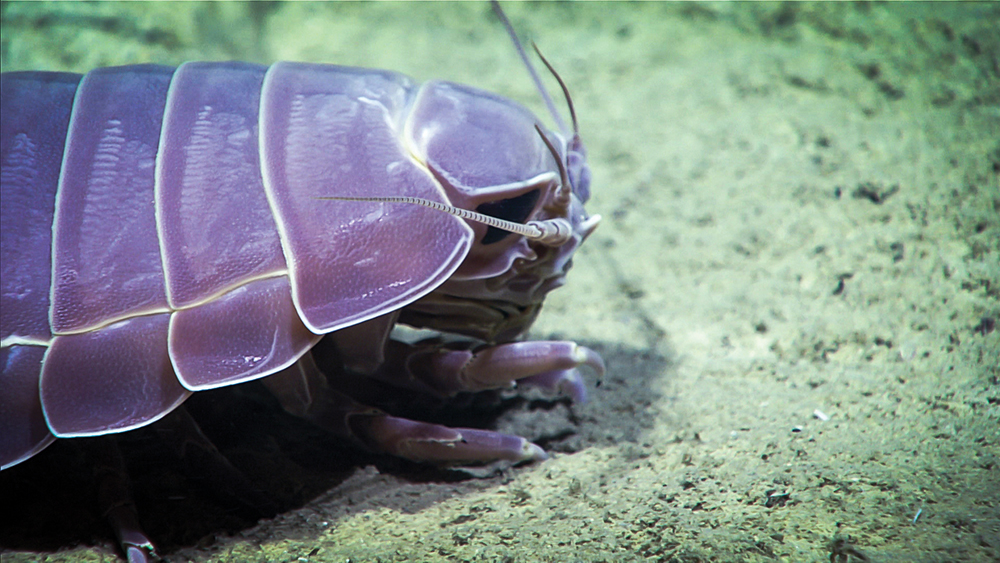 Giant isopods are the largest known member of the isopod family, a group of crustaceans that are closely related to shrimp and crabs. They are also related to Armadillidium vulgare, who you might know as the pillbug or roly-poly. Like its terrestrial cousin, the giant isopod's body is protected by a hard shell that is divided into segments. The first shell segment is fused to the head; the posterior segments are often fused to their body, forming a “caudal shield” over the abdomen. The shell comes in two varieties: brown and pale lilac. The top of the first shell segment extends out over the isopod’s large, fixed eyes. Just like its land-based counterpart, the isopod has compound eyes, with over 4,000 individual facets, giving the animal a large field of view and sensitivity to fast movements. Any light that shines on their eyes is reflected back through the retina by a part of their eye called the tapetum lucidum (located at the back of the retina), creating a glowing effect. The tapetum has evolved in many different species of animals, including cats and alligators, and serves to assist with vision in low light conditions. However, even with these highly specialized eyes, the giant isopod’s vision is very poor, thanks to their generally lightless environment. Giant isopods are found in most oceans of the world, ranging in depth from the dimly lit sublittoral zone at 550 feet to the pitch darkness of the bathypelagic zone at 7,020 feet. Typically bottom dwellers, they prefer mud or clay seafloor. They have been recorded in the West Atlantic from off Georgia to Brazil, including the Gulf of Mexico and the Caribbean. Bathynomus giganteus is one of four known Atlantic species and the only species recorded off the United States. Because light is extremely faint in the deep sea, giant isopods have developed large antennae to feel their way around as they crawl along the ocean floor. They have two sets: a smaller pair used more for chemical sensing, and a larger pair about half the length of their body that are used for physical sensing. Giant isopods have seven pairs of pereopods (legs). The first pair is modified to move food to the isopod’s four sets of jaws. Segments on the abdomen are modified for swimming (called natatorial legs) and breathing (called rami, flat respiratory structures acting as gills). They also have little hooked claws at the ends of their legs. Makes it easier to move around on the ocean floor.

Bathynomus giganteus averages between 7.5 and 14 inches in length, but can reach up to 2.5 feet and nearly 4 pounds. The enormous size of giant isopods is a result of a phenomenon called deep-sea gigantism, or abyssal gigantism – the tendency of deep-sea animals to reach much larger sizes than similar species in shallower waters. Another example of this phenomenon you might be familiar with is the giant squid, which grows to a length of nearly 60 feet in the deep sea. In comparison, its shallower-water cousins only grow to about two feet. There are many theories as to the cause of deep-sea gigantism. It may help creatures survive the extreme pressure of the deep ocean. Or it could be an adaptation to food scarcity, delaying sexual maturity and resulting in greater size. Also, decreasing temperature is thought to increase cell size and life span, which would lead to an increase in maximum body size. Another possible factor is that the deeper an animal lives, the less predators there are, so animals can safely grow to larger sizes. All in all, it’s a mystery.

The giant isopod is carnivorous, generally scavenging the sea floor. Food is extremely scarce at these great depths, so the isopod eats whatever happens to fall from above, such as the bodies of dead whales, fish, squid, crabs, and shrimp. There is some evidence that isopods will also prey on slow-moving animals, such as sea cucumbers and sponges. They are known to attack trawl catches. One was filmed latching onto and eating a larger dogfish shark in a deep-water trap; the footage was aired during the 2015 episode of Shark Week, "Alien Sharks: Close Encounters." These isopods can fast for long periods of time, even years. A giant isopod at the Toba Aquarium in Japan survived for 5 years without eating (even though food was offered every day). At the Aquarium of the Pacific, one keeper reported that their isopods only eat a few times a year; one only ate twice one year. When they do eat, they gorge themselves to the point where they can’t move anymore. They’re always in a state of semi-hibernation since meals can be few and far between. Luckily, they don’t have many natural predators. When a predator does approach, the isopod will raise its legs up in the air and try to make itself appear as large and as dangerous as possible. But if that doesn’t work, it can roll itself up just like a pillbug, exposing only the tough exterior shell. While they do spend most of their time trundling along the sea floor, they are capable of swimming – upright, straightforward, and even upside down.

It is believed that giant isopod spawning peaks in the spring and winter months because more food is available than in the summer. Mature females develop a brood pouch, or marsupium, when sexually active, which can hold up to 30 half-inch eggs (the largest eggs of any marine invertebrate). Males have two specialized organs: 1) peenies, small white appendages that carry sperm, and 2) an appendix masculina, which transfers sperm to the female. (Fun fact: smaller isopods usually have bigger peenies, according to a keeper at Aquarium of the Pacific.) Males inject sperm into the female after her parturial molt (aka spawning molt) – because she's softer. Females bury themselves in the sediment until the eggs are ready for hatching. This is when having a slow metabolism really comes in handy. Young isopods escape from the marsupium as fully formed miniatures of the adults. They are about 3.5 inches long and almost fully developed, lacking only the last pair of legs. At this stage, they are known as manca. Bypassing the larval stage increases the young's chances of survival. Younger isopods molt often to gain size. Adults molt more rarely.

Bathynomus giganteus is not listed on the IUCN Red List, and giant isopods in general are not usually fished commercially – although some can be found in the occasional seaside restaurant in northern Taiwan, where they are boiled and served with rice. The main threats to giant isopod populations include deep sea trawlers, which are catching brooding females with increasing frequency, and pollution. Analysis of the stomach contents of three specimens collected in the southern Gulf of Mexico, north of the Yucatan Peninsula, included large quantities of plastic. Just another indication of the prevalence and persistence of plastic debris in the oceans. From the fossil record, it seems that giant isopods existed more than 160 million years ago (middle of the Jurassic period), during the breakup of the supercontinent Pangaea. So there’s a good chance they’ll outlive us all.

Where I learned about giant isopods, and you can too!

Aquarium of the Pacific
www.aquariumofpacific.org/onlinelearningcenter/species/giant_isopod