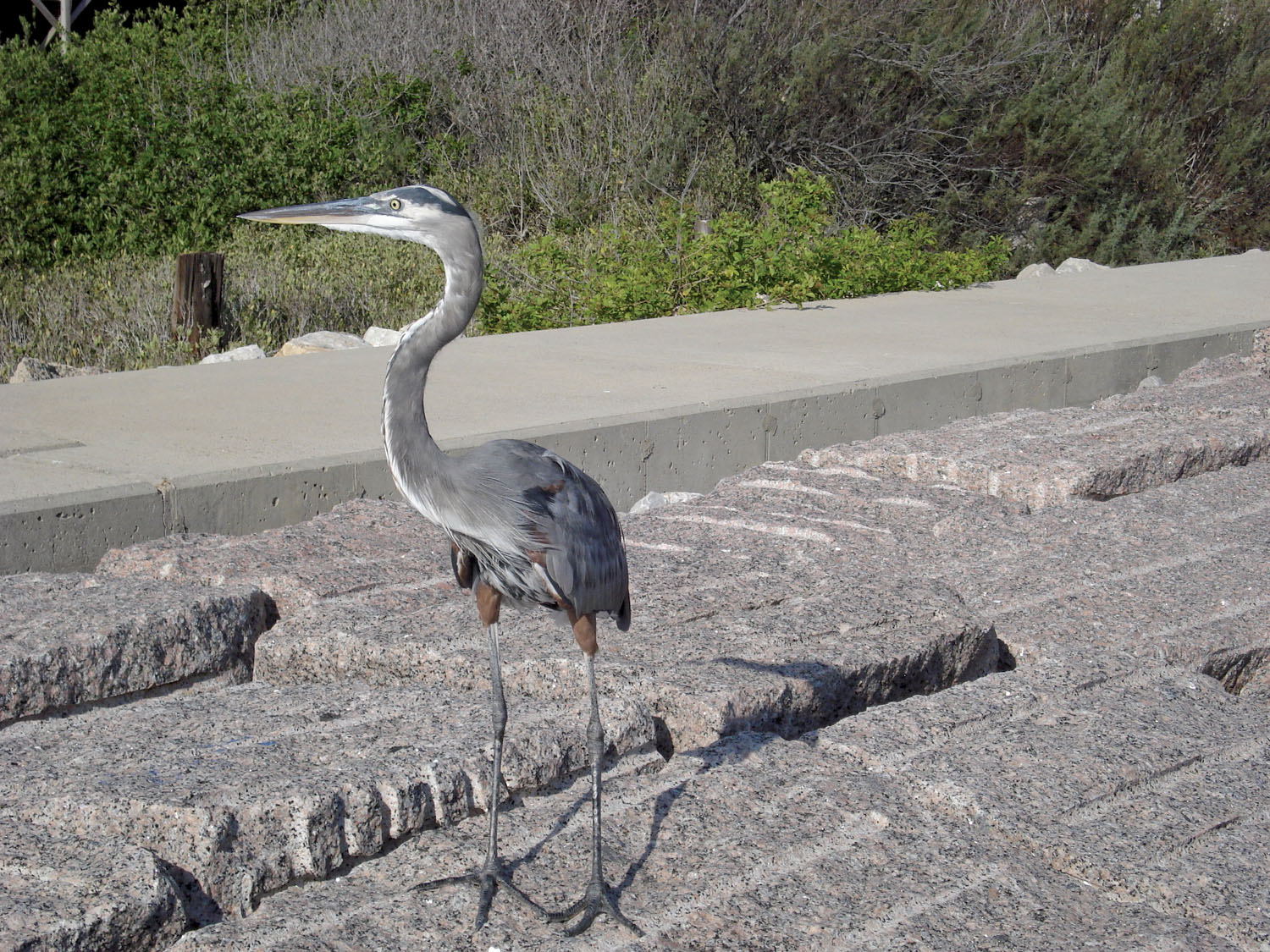 The great blue heron, Ardea herodias, is one of the most widespread and adaptable wading birds in North America. It is the largest North American heron and, among all extant herons, is surpassed in size only by the goliath heron and the white-bellied heron. They can reach 4.5 feet in height and weigh anywhere from 4 to 8 pounds, as an adult. Their 6-foot wingspan makes them a joy to see in flight, and they can cruise along at some 20 to 30 miles an hour, even with their characteristic slow wingbeats. Males are slightly larger than females, but no other sexual dimorphism exists in this species. Great blue herons have long legs, a sinuous neck, and a thick, daggerlike bill. In flight, the heron curls its neck into a tight S shape; its wings are broad and rounded, and its legs trail well beyond the tail. They have a slate-gray body with a wide black stripe over the eye. Head, chest, and wing plumes give a shaggy appearance. A pure white subspecies occurs, nearly exclusively, in shallow marine waters along the coast of very southern Florida, the Yucatan Peninsula, and in the Caribbean. Where the blue and white forms commingle in Florida, intermediate birds known as Wurdemann's herons can be found. They have the body of a great blue heron, but the white head and neck of the great white heron (subspecies).

Any wet habitat from as far north as Alaska and the southern Canadian provinces down to South America is fair game to the great blue heron. It can be found in fresh and saltwater marshes, mangrove swamps, flooded meadows, lake edges, open coasts, sloughs, riverbanks, shorelines, backyard goldfish ponds, and even heavily developed areas as long as there are fish in the water. They'll also forage in grasslands and agricultural fields, where they stalk frogs and small mammals, but they won't forego water for long. And they have a special preening life hack for their sodden lifestyle: powder down. Powder down feathers are small, specialized downy feathers that fray and disintegrate at the end, forming a very fine powder. Herons comb this powder with a fringed claw on their middle toes, using the down like a washcloth to scrape mud and such from their feathers. The powder tends to partially mask feather colors, making black sometimes appear gray. I guess it's preferable to being coated in fish slime.

Although this species is primarily piscivorous, it has been known to eat most small animals that come within striking range, including turtles, snakes, insects, mice, gophers, crabs, shrimp, salamanders, even other birds. When hunting, the great blue heron wades slowly, or stands still for long periods of time, waiting for a meal to come within range. They locate their food by sight and use their dagger-like bills to impale prey, often shaking the prey to break or relax sharp spines and edges, before swallowing it whole. Occasionally, the herons are a little too ambitious with their meal choices; they have been known to choke to death by trying to swallow fish too large for their long necks. Though these birds are generally solitary diners, sometimes loose feeding flocks form with the added benefit of locating schools of fish more easily. More eyes on the prize. They can also hunt day or night, thanks to a high percentage of rod-type photoreceptors in their eyes that improve their night vision. As a large wading bird, great blue herons are capable of feeding in deeper waters, opening a niche to them that is not available to most other heron species. Typically, they wade in shallow waters less than 20 inches deep during twilight hours, but they're open to other plans of action if it gets the job done, including diving headfirst into the water, floating on surface, or grabbing prey with feet. Their variable diet and feeding behaviors allow them to thrive in a variety of environments, including areas where most waters freeze in the winter. They have even been recorded as a vagrant in England, Greenland, Hawaii, and Portugal.

Though great blue herons hunt alone, they prefer to nest in colonies, usually large ones of several hundred pairs. Colonies are normally located 2 to 4 miles from feeding areas, in isolated locations, such as islands or wooded swamps, that discourage predation by snakes and mammals and disturbance from humans. Adults generally arrive at the colony site in late winter or early spring. Males stake out nest sites and court to females. Trees of any type, particularly tall ones, are used when available. Otherwise, herons may nest on the ground, shrubs, cacti, channel markers, artificial platforms, beaver mounds, duck blinds, etc. Males are in charge of collecting nest material (i.e. sticks), which they harvest from nearby shrubs and trees or steal from other unguarded nests. The female weaves a platform and saucer-shaped nest cup, lining it with whatever soft material is available: pine needles, moss, reeds, dry grass, mangrove leaves, small twigs, etc. A basic nest is about 20 inches across, but after multiples years of use, can end up being 4 feet across and almost as deep. Although nests are often reused for many years, pairs are seasonally monogamous, choosing new partners and nest sites each year.

Females lay 2 to 6 pale blue eggs, at two-day increments. Females typically incubate during the night and part of the day. Males incubate the rest of the day. If the nest is destroyed, the female will lay a replacement clutch, but the pair will only raise one brood per year. The eggs hatch in about a month. Both parents feed the chicks by regurgitating food. The first chick to hatch usually becomes more experienced in food handling and aggressive with its siblings, and consequently grows more quickly than the other chicks. After about 2.5 months, the young herons take their first flight. They begin to follow their parents to the feeding grounds and emulating their foraging behaviors. Over the course of the ensuing winter, the now-grown herons gradually disperse to start independent lives. They can live up to 24 years in the wild.

Usually colonies consist only of great blue herons, but occasionally they nest alongside other heron species (subsequently called a "heronry"), and infrequently include even birds of prey. Due to their size, adult herons have few natural predators, but alligators and a few of the larger birds of prey, such as bald eagles and golden eagles, have been known to kill both juveniles and adults. Eggs and nestlings are sought by a much wider variety of predators, including ravens, crows, black bears, and raccoons. Away from the colony, great blue herons defend feeding territories from other herons with dramatic displays: head thrown back, wings outstretched, and bill pointing skyward. Other animals in the area, including humans, can be subject to the same treatment, and a full-grown great blue heron can be a formidable foe.

Great blue herons weathered the impacts of 20th century people relatively successfully. Although they were hunted heavily for their plumes and large chunks of their wetland habitats were drained or developed, most populations have recovered well. Breeding colonies remain vulnerable to habitat loss and human intrusion. Repeated human intrusion often results in nest abandonment. However, in an exception to the rule, a park in Vancouver has had a healthy colony for several years near the main entrance and tennis courts. Herons in the northeastern U.S. and southern Canada have benefited from the recovery of beaver populations, which have created a patchwork of swamps and meadows perfect for foraging and nesting.

The great blue heron's large size and white facial accents distinguish it from other dark herons, such as the little blue heron and the tricolored heron. It's dark color alone distinguishes it from egrets. (Egrets aren't a biologically distinct group from herons. Egret vs Heron is just a naming convention. In general, egrets are light-colored and herons are dark-colored.) The sandhill crane is a similar size, but they are more uniformly gray and adults have a vivid red crown. In flight, the sandhill crane flies with its neck outstretched while the heron pulls its head back against its shoulders. Plus, sandhill cranes are usually in flocks while great blues are usually solo unless there's a lot of food to be had, like at a fish hatchery. While it seems that herons at a hatchery would be a problem, mostly they eat the sick fish that spend more time near the surface anyway. Useful and iconic.

And now, I'll leave you with some advice from a great blue heron...
Wade into life. Keep a keen lookout. Don't be afraid to get your feet wet. Be patient. Look below the surface. Enjoy a good reed. Go fish!

Where I learned about great blue herons, and you can too!

The Cornell Lab of Ornithology | All About Birds
www.allaboutbirds.org/guide/Great_Blue_Heron/id