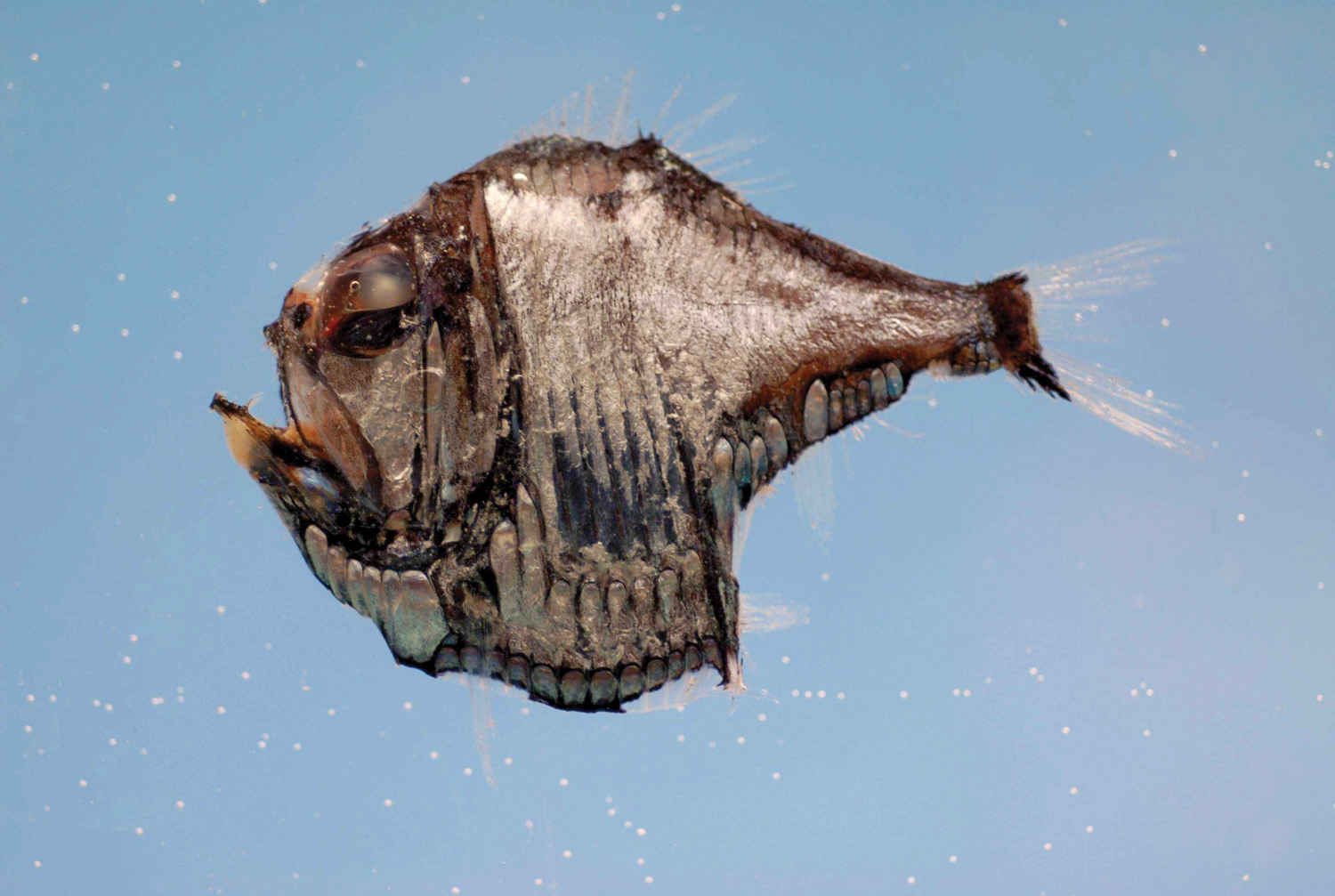 Hunger again. The Hatchets yet were in sparkling condition, four-inch diameter medallions with tall and widish mouths. They wheeled in the shifting patterns of cavalcade down current, cross current, up current, in their timeless dark. Ahead was life growing brighter, looming first as a whirling glow to become frenzied dots then the fast moving discs of teenage Hatchets rushing proud and heedless in and out of a gnat-like swarm of baby shrimps they had cornered in a cornerless world, to feed well on.

They were themselves well fed on. The attacking adults flipped the dime-size youngsters into the coin slots of their mouths with winners’ dexterity. The coins gave out, and the cannibals, having wiped out most of a splinter generation, rolled on, heartened and fueled by the treat.

If you ever want to vicariously experience life in the deep sea, take a moment to look into the tormented eyes of the marine hatchetfish. While that sounds a touch dramatic, when you live below the photic zone and make the perfect meal, life isn’t a fairy tale. Marine hatchetfishes are small mesopelagic members of the stomiiform subfamily, Sternoptychinae. Stomiiformes is an order of deep-sea ray-finned fishes of very diverse morphology which, as a whole, are often called dragonfishes and allies. This scientific name ultimately derives from the Ancient Greek stóma, meaning mouth, and the Latin forma, meaning external form, the former being a nod to the gaping mouths of these fishes.

Though the largest population lives in the waters of South and Central America, hatchetfishes can be found at depths between 150 to 5000 feet in most of the tropical, subtropical, and temperate waters of the world. Sort of temperate, anyway; the deep sea isn’t all that conducive to heat. There are about 45 species, several of which are found off our own coast in the Gulf. Their most distinctive feature is, of course, their hatchet-shaped body (a name that ‘cuts’ right to the point); though many species look more like silver dollars. Despite their seemingly cavernous mouths and chilling eyes, hatchetfish are actually quite unimposing. They vary in size from one to six inches. The body is deep and extremely laterally compressed. Their scales are silvery, delicate, and easily rubbed off. Larger species can be green or brown in color. Some species, such as the highlight hatchetfish, Sternoptyx pseudobscura, which can be found in the Gulf, have large sections of the body near the tail that are transparent. They have small perpendicular spines and blade-like pterygiophores (the bones that support the dorsal fin). Their pelvis is rotated to a vertical position. The mouth is located at the tip of the snout and opens almost vertically. They have large, tubular eyes that can collect the faintest of light and focus well both near and far. The eyes point upwards, enabling them to discern the silhouettes of prey against the extremely faint illumination from above. Their delicate looks belie the steady tenacity needed to survive at crushing depths.

It is believed that hatchetfish swim closer to the surface at night to feed, mainly on plankton and tiny fish and crustaceans, though they can also jump out of the water to catch small flying insects. They hunt the shadows above them, and at daybreak, return to the blackness of the deep ocean. Hatchetfish are not alone in their hunting methods. Many mesopelagic piscivores have large eyes relative to head size, suggesting visual tracking of prey. The common tubular shape produces a binocular field and increases depth perception. Some, such as the slender hatchetfish and the short fin pearleye, have yellow lenses, which may make bioluminescent species more detectable. Since many species in the same realm use similar hunting methods, the hatchetfish has to produce a countermeasure for its own hunting style. In addition to their slender shape and reflective scales, marine hatchetfish, like so many deep-sea creatures, have evolved to create their own light. They have special light-producing organs, called photophores, that run along the length of their underside, which they can regulate to match the intensity and color of light filtering down, thus concealing their silhouettes from hungry eyes below. This is a type of bioluminescent camouflage called counterillumination. No word on its effectiveness against yellow-lensed predators.

In the absence of daylight, color ceases to play a major role in communication. It is replaced by bioluminescence. The patterns of light differ slightly between hatchetfish species, leading many scientists to believe that they may play a role in courtship. However, because of the great depth that makes research challenging, this theory remains unconfirmed. In fact, not much at all is known about the hatchetfish life cycle. Most researchers agree that they have a short lifespan of no longer than a year. What is known is that they release large amounts of buoyant eggs, and the juveniles bear little resemblance to the adults.

Among deep-sea fishes, those living near the sea floor typically have great noses (or equivalent olfactory organs). The most obvious advantage of a good sniffer is scavenging. Dead organic materials that drift to the sea floor are a rich food source that can be easily tracked with the right equipment. Another, perhaps less obvious but no less important, advantage is finding a mate. Pheromones are a common form of communication in fish, and sexual dimorphism of olfactory organs among bathypelagic fauna (those deep-sea fish living near the sea floor) is the rule, not the exception. A model for locating mates via pheromones was created for the short silver hatchetfish, Argyropelecus hemigymnus (another species found in the Gulf). The results were applicable to both mesopelagic and bathypelagic fish. Essentially, a female swimming with the current releases a pulse of pheromones that spreads in a horizontal swath. Males, probably moving at random, encounter the swath and search within it for the female. Fun fact: the spread of a substance released in midwater that is faster in the horizontal direction than the vertical is anisotropic. The water column is stratified below the thermocline (the transition layer between surface and deep waters in which temperature changes more rapidly with depth than it does in the layers above or below), so thin “pancakes” of water exist and have been traced horizontally for over 3,000 feet. The model predicts that a horizontal swath of detectable pheromones can reach up to about 300 feet in nine hours, and fully dissipates within a day. It also predicts that a healthy male, would on average, find the female in about an hour through this method (assuming uniform distribution of males). Without pheromones, the time to find a female increases to eight days. So if they’re not using pheromones to advertise, hatchetfish are missing out on a really big market.

Hatchetfish are especially well adapted for their ecological niche. However, remove them from their mesopelagic range, and those characteristics that enhance their competitive fitness in their normal habitat become a detriment to survival. The unchanging essence of the oceanic water column over the ages appears to have favored the evolution of highly specialized morphological types. Geological records imply that specialist species have higher extinction rates than do generalists, but until change comes their way, it seems specialists have the edge. And what could possibly change the deep sea? Besides us. Though it seems untouchable, the deep sea is not so far away that it’s beyond the reach of human activities. Many things that find their way into the ocean, whether it’s tossed in the trash, washes off a beach, or falls off a boat, eventually make their way to the deep sea. Just this year, scientists found polychlorinated biphenyls (PCBs) and other persistent organic pollutants in amphipods in the Mariana Trench – the deepest part of the world’s oceans. It is thought the chemicals reached this “remote and pristine realm” as plastic debris or contaminated dead animals floated down to the sea floor. It’s not just our bays or our Gulf. Creatures of the deep are affected by what we do at the surface, too. For many of us, it’s “out of sight, out of mind.” Unfortunately for the hatchetfish, they’re stuck watching whatever comes down.

Where I learned about hatchetfish, and you can too!