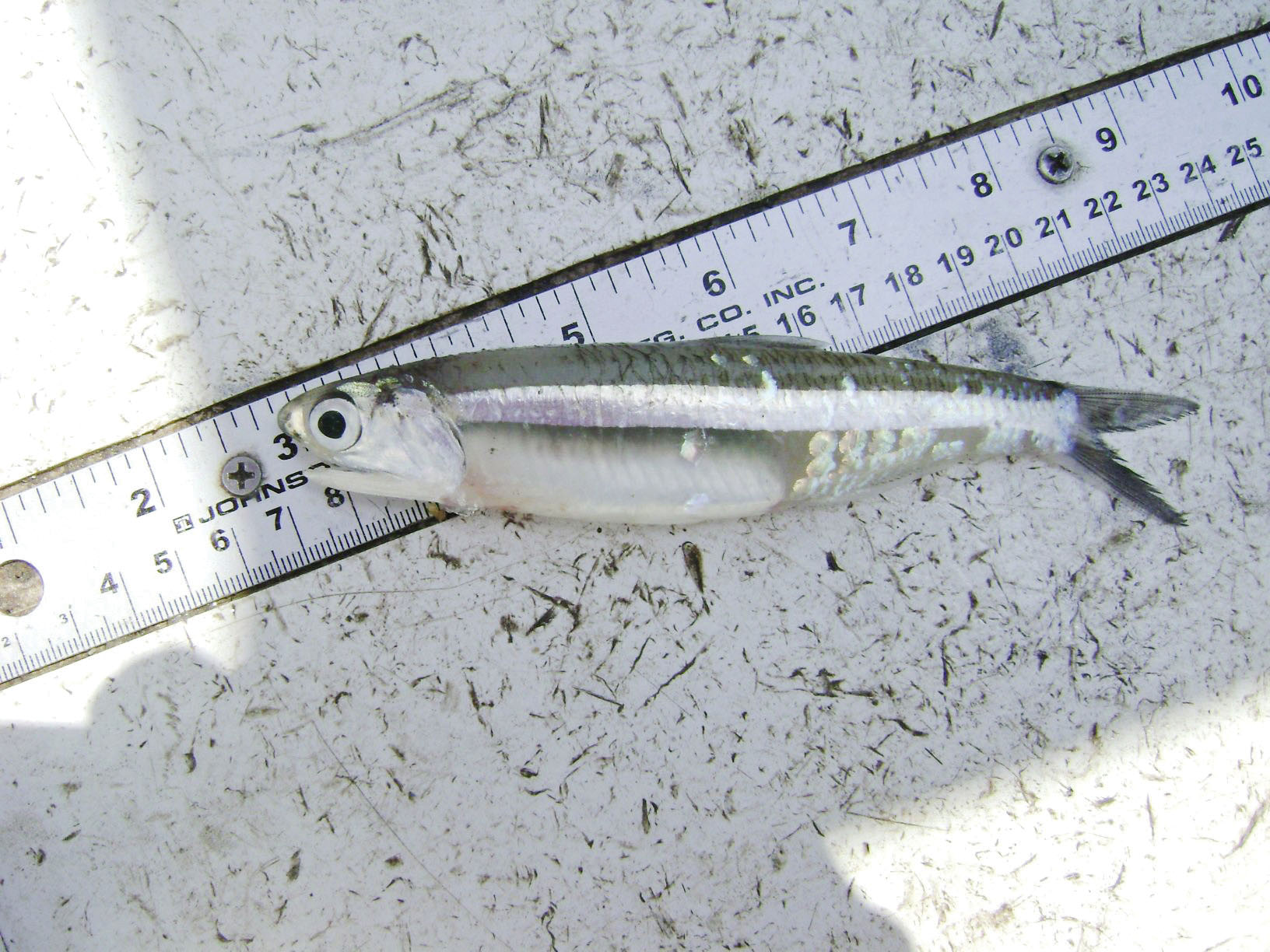 Striped anchovy; photo by TPWD.
Anchovy pizza may be an acquired taste, but how about that Caesar salad you ordered? You may not notice a fishy flavor, but these little fish are used in a surprising range of foods. Because of their strong flavor, they are included in several sauces, including Worcestershire and Caf de Paris. In ancient Rome, anchovies were the base for a fermented sauce called garum, which was mass produced as a cure for dog bites, ulcers, and dysentery. Raw anchovies had a different value as an aphrodisiac.

Over a hundred species of anchovy are scattered throughout the world's oceans. Most live in shallow tropical or warm temperate waters and are adaptable to a wide range of salinity. Large schools can often be found in brackish areas with muddy bottoms, as in estuaries and bays. A few tropical species inhabit freshwater. They tend to move inshore during the spring and summer and offshore during the fall and winter. Anchovies belong to a sub-class of bony fishes, Actinopterygii, from the Greek aktis (meaning ray) and pterygion (meaning fin). They are then filtered down into the order Clupeiformes, from the Latin, clupea (meaning sardine) and forma (meaning shape); and the family Engraulidae, from the Greek, eggraulis (meaning anchovy). There are seventeen genera of anchovy, but the two in Texas waters are Anchoa, from the Italian, ancioa (meaning anchovy), and Engraulis, from the Greek, eggraulis (meaning anchovy). There seems to be a pattern here...

Though its body is often translucent, the anchovy appears as a small green fish with blue reflections due to a silver stripe that runs along the bottom of the fish. It has a blunt snout with small, sharp teeth in both jaws and is distinguished by a large mouth, usually extending behind the eye. Because of their small size, generally five to eight inches in length, anchovies are often confused with sardines, herrings, and silversides; that large mouth is the key to telling them apart.

Like herring and other relatives, anchovies are streamlined for fast swimming and often form huge shoals in response to predation, which makes many species commercially important for the fishing industry (not so much around here). Within these shoals, individual anchovies are nearly indistinguishable from each other, and small predacious fish, such as skipjacks, seem incapable of snagging any. However, these compact schools take on the appearance of a single prey, attracting the attention of larger fish, such as sharks, which would have been uninterested in isolated anchovies. This conundrum is perhaps why anchovies have been observed showing a nocturnal behavior similar to herring, remaining at depth during the day and coming to the surface at night. Anchovies have a rather limited diet, almost exclusively plankton and fish larvae. However, sometimes they eat small fishes, snails, slugs, and tiny crustaceans called isopods.

Spawning takes place during the evening/night hours and is temperature-dependent, requiring between 50-75 degrees F. Time of year varies between species and location. Anchovies are batch, or serial, spawners and may spawn more than fifty times in a a season. A single female may release 25,000 eggs in a year. Fertilization is external, and the eggs are transparent and buoyant with sausage-shaped yolks, rather than round. The eggs hatch after about 48 hours, producing larvae about three millimeters in length. Larvae attain their adult form and coloration in about three months. Most reach sexual maturity at the end of the second year, when they are about six inches in length, though some species were observed to be sexually mature by three months. The maximum life span is thought to be about seven years in non-exploited populations.

The anchovy is a food source for almost every predatory fish in its environment, but its popularity doesn't stop at the water's surface. The breeding success of some birds, such as the California brown pelicans and elegant terns, is strongly connected to anchovy abundance. Additionally, the anchovy has a great deal of culinary value. In addition to traditional fishing methods, anchovies are now located by radar and sonic scopes. Fresh from the water, anchovies are deposited in large buckets of brine for the first cleaning stage. Skilled workers clean each fish, mostly by hand, a centuries-old technique. The fish are then arranged in layers in cylindrical barrels. Each layer is packed with salt. Heavy stones atop the barrels press the anchovies, squeezing out water and fat. The weighted barrels are stored up to twelve months. After their incarceration, the anchovies are thoroughly rinsed and pressed again, or placed in a centrifuge, to remove as much water as possible. Each anchovy is finally skinned, de-boned, divided into two fillets, and packed by hand into cans, which are then filled with olive, soybean, or sunflower oil. The cans are sealed and kept cool, ready for shipment. Canned anchovies can last up to a year at room temperature, and once opened, can be refrigerated for up to two months if sealed airtight and covered with oil.

Picking out your canned anchovies is easy, but what if you want fresh (you know, for the aphrodisiac effect)? In this case, check out the eyes; they should be bright and protruding, with an iris that is black, not reddened. Fresh anchovies also have a milder flavor. The strong taste people associate with anchovies is due to the curing process. This small, oily fish is not only flavorful, but is also laced with nutrients. Anchovies are rich with vitamins, such as B-12, D, E, K, niacin, and riboflavin. B vitamins support brain, liver, and nervous system health; D helps with calcium absorption; E is an antioxidant; and K is important for blood clotting. A single serving provides more than three days' worth of omega-3 fats, which lower your risk for heart disease. Plus, they are a good source of calcium, protein, iron, phosphorus, and selenium. Calcium and protein uses are a given, right? Iron carries oxygen throughout your body, and you need phosphorus and selenium for forming DNA.

There are a couple of drawbacks to these little vitamin pods. First, they are extremely high in sodium content (in their canned form). Second, anchovies can concentrate domoic acid. Domoic acid is produced by tiny algae in the genus Pseudo-nitzschia, and is a neurotoxin. It accumulates through the food chain, and if consumed, can cause amnesic shellfish poisoning, resulting in permanent memory loss, brain damage, or even death. It's not just humans it affects either. On August 18, 1961, thousands of crazed seabirds were sighted on the shores of North Monterey Bay in California. The birds, identified as sooty shearwaters, regurgitated anchovies, flew into objects, and died on the streets. This event inspired Alfred Hitchcock's film, The Birds. Here's a few more fun facts: some sailors claim that a salted anchovy cures sea sickness; anchovies are a natural source of the so-called fifth taste, umami (the original MSG); anchovy paste is a basic ingredient in pasta puttanesca, which owes its name to the dish prostitutes delighted their customers with in the 19th century; in Latin languages, such as Italian, the equivalent word for anchovy is sometimes used to describe a person who is all skin and bones; in the 80s film, Loverboy, the magic word for obtaining sexual favors from the very sexy pizza delivery boy was to order "pizza with extra anchovies" (I think they knew some Roman history).

In Texas waters, there are four species: the bay anchovy, Anchoa mitchilli; the dusky anchovy, Anchoa lyolepis; the striped anchovy, Anchoa hepsetus; and the silver anchovy, Engraulis eurystole. The bay anchovy is used, to some extent, to make anchovy paste. The other three species are mainly used as bait. As for identification, the striped and dusky anchovies have longer snouts and wider lateral stripes than the bay anchovy. All have different placement of anal and dorsal fins. The bay anchovy is typically the shortest in length, averaging about 2.5 inches; the striped anchovy is typically the longest at about 4.5 inches. Happily, probably because there's not really a commercial fishery for these guys in the Gulf, our anchovy populations are doin' good! Which means, for now, there's plenty of little two-inch sex stimulants swimming around in our bays.

Where I learned about anchovies, and you can too!