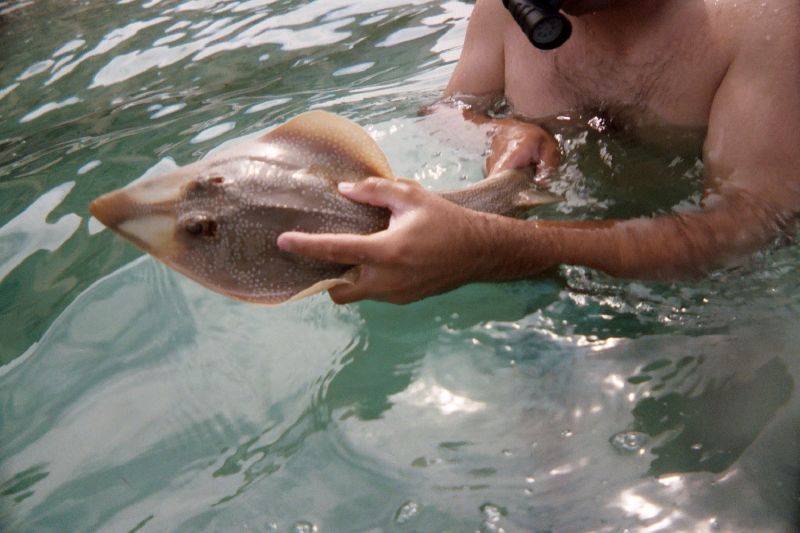 Clinton Robertson, a fisheries biologist with the TPWD at San Marcos, caught this guy with his bare hands. He says, "You just got to sneak up behind them while they are buried in the sand and grab their tail very quickly!" Photo by Charles Robertson.
...guitarfish!

Okay, the guitarfish actually IS a ray, but it doesn't quite look like one. Guitarfish have an intermediate body form between sharks and rays. The tail has a typical shark-like shape with two dorsal fins, and in most species, the head has a flat triangular shape, similar to the more-familiar disc shape found in other rays. People the world over look at these flat shark-like rays and associate their triangular heads with guitars. Except Russia, where because of a difference in the culture of stringed instruments, the guitarfish are called by a different name: balalaika fish.

People often cite the guitarfish as the "missing link" between sharks and rays, but that's not quite accurate. Though modern ray species may have evolved from primitive guitarfish (still some research to be done on that), guitarfish did not evolve from sharks, and current consensus is that rays did not evolve from guitarfish. What they DO have in common is an ancestor, possibly from the early Jurassic (about 190 million years ago) or perhaps the Carboniferous (some 100 million years earlier). The neoselachians (a grouping of cartilaginous fishes containing all living sharks, skates, and rays) diverged several times throughout the Jurassic and Cretaceous periods, creating an astonishing diversity of new forms and lifestyles. It was during the initial Jurassic explosion that the flattened skates and rays appeared. All modern skates, rays, guitarfishes, and sawfishes are collectively termed batoids. The oldest articulated batoid fossils date back to the late Jurassic, about 150 million years ago. ("Articulated" means that the bones of a skeleton are in the same relative position to each other as they were when the creature was alive. If a skeleton is articulated, it is assumed that it found its final resting place while there were still ligaments and flesh holding it together.) These well-preserved body fossils, found in what is now France and Germany, are clearly ancient guitarfishes (family Rhinobatidae). The guitarfish of this period were the first of the rays and skates to emerge on the fossil scene, and they were a little more primitive than the guitarfish of today, with more shark-like skeletal structure and fin spines. The most recent additions to the batoid tree are the stingrays, which showed up a mere 60 million years ago.

The combined range of the various guitarfish species is tropical, subtropical, and temperate waters worldwide. Most can tolerate saltwater, freshwater, and brackish water. Our local guitarfish is the Atlantic guitarfish, Rhinobatus lentiginosus. Also called the freckled guitarfish, this species occurs in the western Atlantic Ocean from North Carolina to the northern Gulf of Mexico and Yucatan, Mexico. The Atlantic guitarfish is the only guitarfish appearing within its range. They are usually found around sandy and weedy bottoms from the shoreline to depths of 98 feet, sometimes near patch reefs, often buried in the substrate.

The dorsal side of the Atlantic guitarfish is grayish to olive brown or chocolate brown with white freckling covering the surface, a creamy pale white hue below, and darker colorations on the pectoral fins. Its long, wide-pointed snout is almost translucent. Unlike many other rays, these critters do not have spines at the base of their tails. One of the smaller species of guitarfish, the Atlantic guitarfish only reaches a total length of approximately 30 inches.

As with all guitarfishes, the Atlantic guitarfish swims in a similar manner to sharks, by moving its tail from side to side. They also use their pectoral fins for acceleration and maneuvering. Instead of swimming perfectly horizontal, guitarfish typically maintain a positive swimming angle with the head just slightly higher than the tail. They have limited color vision, probably restricted to the blue-green spectrum, which may be to enhance the contrast of prey against their environment. Guitarfish are bottom feeders, feeding on small crustaceans and mollusks, worms, a variety of small fishes, and other bottom dwellers. They have molariform dentition: the teeth are fit closely together, rectangular at the base with rounded corners, similar to stingrays, and are ideal for crushing and grinding. Prey is detected by special electro-sensory organs and captured with suction. To make the acquisition easier, guitarfish sometimes use their flattened heads to cut off escape routes and hold prey on the bottom while feeding. It is likely that large predatory sharks sharing the same geographical location and habitat prey on the Atlantic guitarfish.

Guitarfish are ovoviviparous, meaning the embryo matures inside an egg that is inside the mother until it is ready to hatch. Embryos feed initially on yolk, then receive additional nourishment from the mother by indirect absorption of uterine fluid enriched with mucus, fat, or protein. Young are born fully developed and measure approximately eight inches long. There can be up to six pups in a litter. Males are believed to mature at 19-21 inches, indicated by well-developed claspers at this size. Females mature at about 23 inches. Along the lower Texas coast, the females are thought to give birth during late spring to early summer.

Though guitarfish are an important commercial catch in many coastal nations, in the United States, they are primarily caught as bycatch in shrimp trawls, and there is no commercial interest. Because shrimp trawl fishing is intense in the Gulf of Mexico, particularly in shallow waters where this species occurs, population is an area of concern. With their limiting life-history characteristics (low fecundity; large, precocious young; late maturity, etc.), guitarfish are particularly vulnerable to population depletion. Given that fishing pressure is very intensive throughout the southern part of this species range, it is given a precautionary assessment of Near Threatened on the IUCN red list. They're not really good to eat, so there's not much of a recreational fishery either, though catching a guitarfish can be quite surprising if you've never seen one! They aren't harmful to humans. In fact, they're generally easy to approach. You can sometimes even scoop them right off the seabed (if you're sneaky).

Where I learned about guitarfish, and you can too!