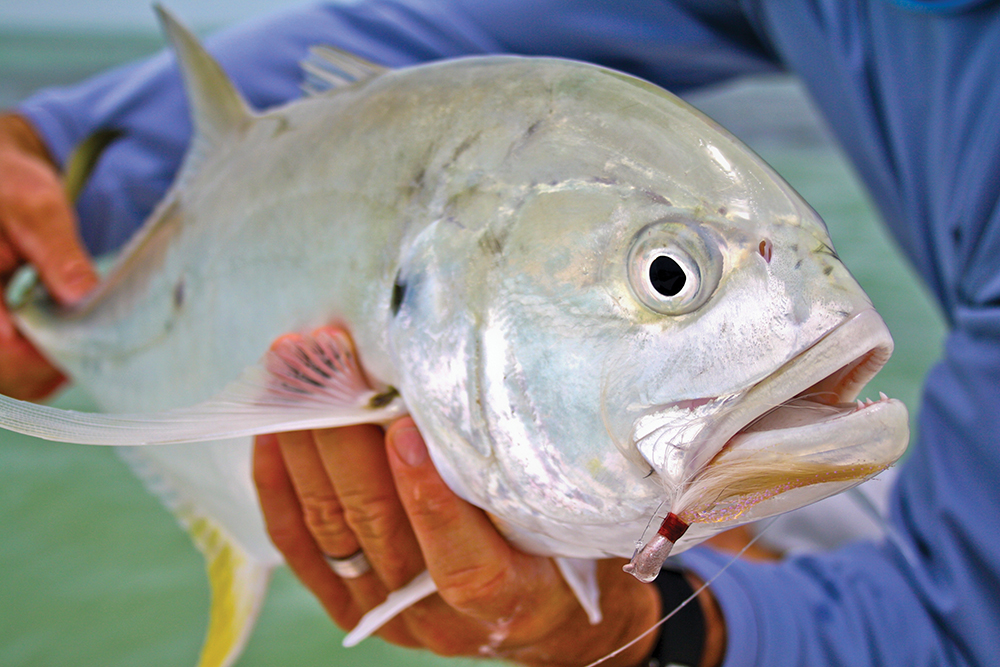 There are dozens of jack species, and the crevalle is a typical representation of the family Carangidae. They have compressed silvery bodies, a series of bony scutes (enlarged scales) that extend in a line to the base of the tail, and deeply forked sickle-shaped tails. The chest is scaleless except for a small patch in front of the pelvic fins, a unique feature among Western Atlantic Ocean jacks. There is a rounded black spot at the lower base of the pectoral fin and a dark spot on the gill cover, both of which are also found on no other jacks in the area. They’re a rather cantankerous-looking fish, with a blunted face, steeply convex forehead, and large eyes. In addition to the silvery sheen, crevalle have greenish-bluish-blackish backs and yellow or golden undersides. The average size in Texas waters is two to five pounds, but larger sizes up to twenty-five pounds are common. The Texas record is 52.25 inches, 50.25 pounds (1976).

The common name, crevalle, stems from the Latin caballa, the feminine form of caballus, meaning horse. The genus, Caranx, is derived from the French carangue, meaning Caribbean fish. The species, hippos, is Greek for horse. So… Caribbean horse fish. The Caribbean Sea does fall about midway in its range, so I suppose that’s appropriate. The crevalle jack occurs in the Western Atlantic from Nova Scotia to Uruguay, including the Gulf of Mexico and occasionally the West Indies. In the Eastern Atlantic, it is found from Portugal to Angola, including the Western Mediterranean. They are a pelagic warm water fish and are found in oceanic, estuarine, and riverine environments, depending on life stage. Though they are primarily found along the continental shelf, they occur in waters as deep as 327 feet. Fish found in those depths are often larger individuals. They usually occupy areas with strong currents and hard substrate. Offshore reefs, both manmade and natural, are key habitats for jacks, but they’ll also cruise the shallow inshore areas. Adult jacks typically prefer water temperatures between 64 and 92.5 °F and larvae are found in areas between 69 and 84.9°F. Temperatures below 48°F have proven lethal in at least one hypothermia-driven mass mortality in Massachusetts. All stages seem to prefer salinities above 30 ppt, though adults have been known to travel up coastal rivers.

Jacks hunt like a pack of wolves. They move in large schools, strike quickly, and leave little left of their prey. In open water, they will herd bait fish into a tight ball, then rush in from all sides. In shallow water, they’ll chase smaller fish onto beaches or against sea walls. They are voracious opportunistic diurnal predators, eating anything smaller than themselves – fish, shrimp, crustaceans, whatever’s locally available, even garbage dumped off boats. Crevalle also have the ability to detect elevated dimethylsulfoniopropionate (DMSP), a chemical by-product made by marine algae and released by foraging zooplankton. Juvenile jacks depend on this to find areas with high concentrations of plankton. Young jacks are, in turn, prey for many other carnivores, such as marlin and sea birds. For protection, they use a behavior called piloting in which they shadow a larger fish or – if none are available – buoys, boats, or swimmers.

Large aggregations of jack crevalle, containing upward of 1000 individuals, form prior to spawning. Pairs break off from the school to court, with one individual turning a much darker color during this exchange. Sometimes the pair spawn before returning to the main school; sometimes they only court and return to spawn en masse. The spawning season lasts from early March to early September and occurs offshore in the southeastern Atlantic coast where the eggs ride the Gulf Stream currents. Evidence from laboratory studies indicates that jack crevalle coordinate their spawning aggregations over coral reefs based on the release of DMSP, proving this byproduct to be doubly useful. Like many offshore species, crevalle larvae utilize estuaries as nursery grounds. Juveniles less than five inches in length are abundant in estuaries with muddy bottoms, near sandy beaches, and over seagrass beds. They form fast-moving schools, feeding on small fish and crustaceans. Under six inches, juvenile jacks have five dark stripes along the sides, but trade them in for the adult coloration soon after. Females mature around five or six years of age and are typically larger than males, which mature at four or five years. Lifespan is under twenty years.

In U.S. waters, landings in the commercial fishery peaked in 1990 at 1,748 tons. In 2013, 106 tons were landed. The decline was due to a regulation change in the fishery implemented in 1995, which banned trammel nets, gill nets, and purse seines. Since 1995, the landings have remained stable. The recreational fishery generally lands slightly more than the commercial. Though jack crevalle are exploited through much of their range, and some localized population declines may be occurring, there are no major threats to the global population. Therefore, the IUCN Red List categorizes them as Least Concern.

The best angling for crevalle in Texas waters is from May to August. With their long fins, sickle-shaped tail, and broad, flat bodies, these fish are built for speed and strength, making them good sport for rod and reel. Jacks have powerful jaws and sharp teeth. Never stick your thumb in a jack’s mouth unless you want to pull back a mangled nub. The teeth, rasping together in combination with air bladder resonance, are also responsible for the croaking noise it makes when caught. Jack crevalle are not highly valued as food, though they are edible. Small fish taste better than large ones, and bleeding sometimes improves the taste, which has been likened to beef. There have been some reports of ciguatera poisoning associated with this species. Ciguatera poisoning occurs when you eat a fish that has digested a certain toxin produced by the dinoflagellate, Gambierdiscus toxicus. It can cause nausea, vomiting, and neurologic symptoms such as tingling fingers or toes or a reversal of cold and hot sensations. Symptoms can be treated and usually go away in days or weeks but can last for years. Since they’re not great table fare, jack crevalle are often released after landing. However, since large jacks will often fight until critical exhaustion, release mortality is high. But they’re a hardy species, nonetheless, and can revive even after a long battle if the angler takes care in the release.

Game fish are too valuable to be caught only once.
~Lee Wulff

Where I learned about jack crevalle, and you can too!

University of the West Indies
sta.uwi.edu/fst/lifesciences/documents/Caranx_hippos.pdf