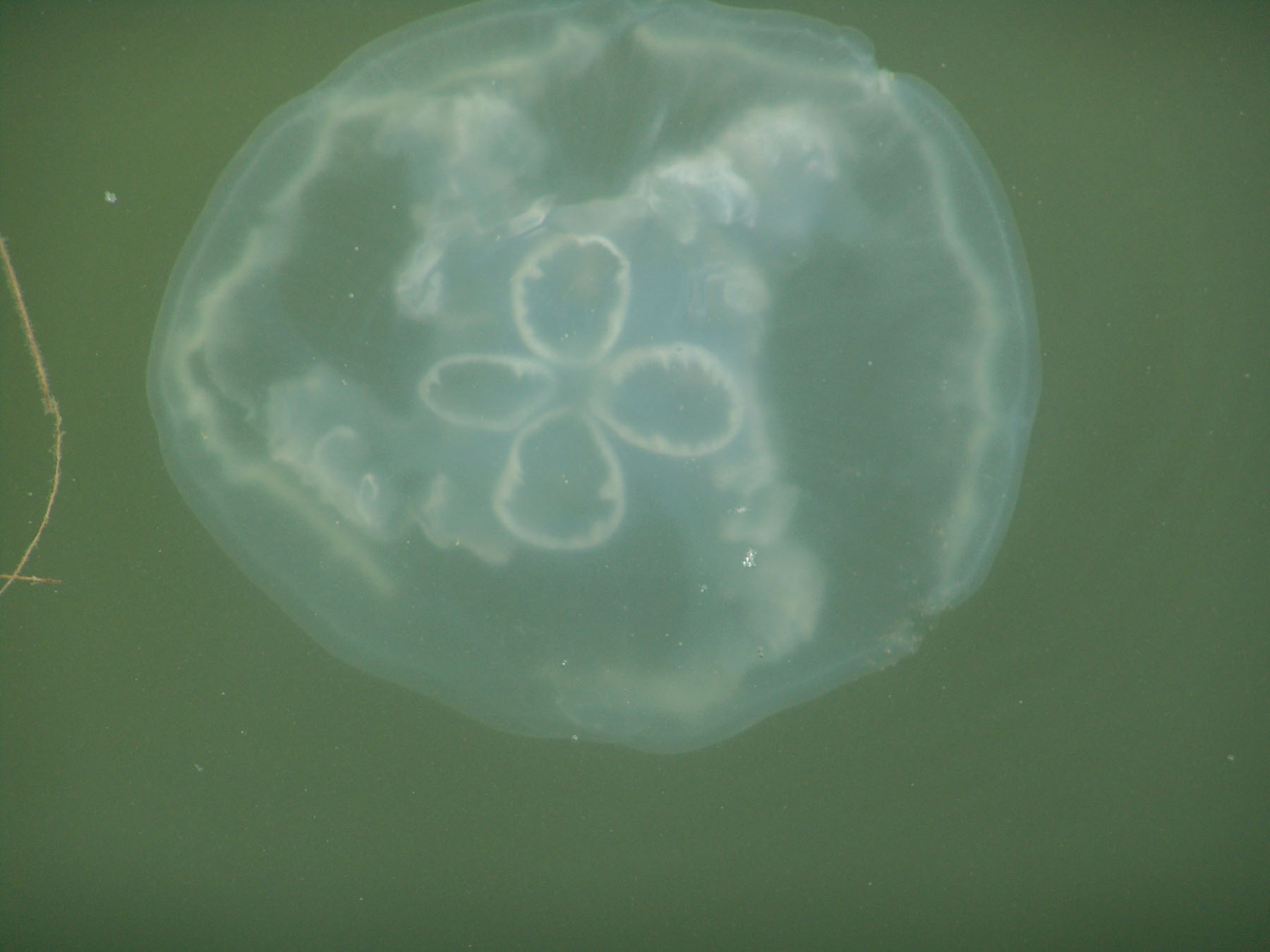 Comb Jelly.
Jellyfish are some of the oldest surviving members of the animal kingdom. They have existed in our oceans since before dinosaurs roamed the earth. There are over two thousand species of jellyfish that we know of, and more are discovered in almost every uncharted area of ocean we cover. They can live in all levels of water and can withstand a wide range of temperatures and salinities, from the surface of shallow coastal waters to the very depths of the marine world.(1) Jellyfish belong to the phylum Cnidaria, a structurally simple marine group including, among others, sea whips, corals, and colonies of specialized animals living together, such as the Portuguese man-of-war.(2)

Their bodies are comprised of an outer layer that covers the body surface, an inner layer that lines the gut, and between the two, a thick, elastic gel-like substance. The digestive system is a single cavity that works as a gullet, stomach, and intestine all at once, and there is a single opening for the food that goes in and the waste that comes out. Prey captured by the tentacles is conveyed to the mouth by four to eight oral tentacles surrounding the single opening. Jellyfish have no brain; instead they have a nerve net capable of detecting light, smell, and other stimuli and reacting accordingly. They come in more colors and shapes than a science fiction novelist could dream up, though a majority are semi-transparent and bell-shaped. Some are less than an inch in diameter while others can grow to lengths of over one-hundred feet. Despite even those reaching that massive size, most jellies are quite delicate, often composed ninety-five percent or more of gelatinous organic matter (which is itself about 95% water).(2)

Jellyfish have a complex life cycle and pass through two different forms before reaching the medusa stage, which is the familiar adult form. During reproduction, males release sperm through their mouths into the water. The sperm is then swept into the waiting mouths of females where fertilization occurs. Development begins either inside the female or in pouches along the oral arms. When the larvae reach the first free-swimming stage, they abandon their mother and drift until they come across something on the sea floor they can attach themselves to (rocks, pipes, etc.). From there, they develop into flower-like polyps and become filter feeders. A polyp can multiply asexually, reproducing copies of itself, and when optimal conditions arise, each polyp transforms into what looks like a stack of buttons. Each button becomes a tiny, free-swimming jellyfish, which then grows into the final medusa stage, thus completing this unusual life cycle. (2)

Adults of most species only live a few months, and though they have some muscle control which allows them to move vertically through the water column, most spend a majority of their lives drifting with the currents and tides, waiting for unwary and edible creatures to swim into their tentacles. This is a form of passive hunting called suspension feeding. A few species have a greater capacity for swimming and will actively pursue prey, though they must still ensnare the prey in their tentacles. (1) For most stinging jellies, each tentacle is equipped with hundreds or thousands of specialized hypodermic harpoons, called nematocysts, which, when triggered, fire into prey and inject paralyzing venom. Usually, these toxins only paralyze or kill small creatures, though some can be harmful to humans. (2)

To many people, jellyfish may appear to have little value. However, they play some important roles in ocean ecosystems. For one, they occupy a middle position in the food chain, so they simultaneously keep smaller and more numerous species from overpopulating and they serve as a food source for larger predatory species, such as leatherback and loggerhead sea turtles, swordfish, salmon, and tuna.(1) Some jellyfish also eat fish eggs, which can be detrimental to fish populations in an area saturated with jellies. Amazingly, some fish species are immune to jellyfish venom and actually hide from predators in the jellies' stinging tentacles, like the clownfish does in sea anemone tentacles. These are usually juvenile fish, though, that will leave the tentacles' protection when they can defend themselves. Jellyfish also have a purifying role in ecosystems. Due to their unique method of locomotion (sucking in water and shooting it out), they filter huge volumes of water through their bell. Some of the pollutants that pass through this filtering, such as agricultural runoff, gets digested, leaving the water much cleaner than before.(3)

Moon jellies are one of the most common species of jellyfish in the world. They inhabit the coastal waters of all zones, including brackish waters that are up to 99% freshwater, and frequently occur in huge numbers. Their bodies are translucent, finely patterned with stripes or spots. Four horseshoe-shaped organs are visible within and provide the most distinctive characteristic of this species. They swim horizontally at the surface to allow their tentacles to be spread over the largest possible area. Moon jelly tentacles are venomous and can cause a mild prickling and burning sensation to humans.

Also known as the cabbagehead jelly and the jellyball, this species does not have the characteristic long tentacles common to most jellyfish, but instead, have short finger-like projections which are its oral tentacles. Unlike the moon jelly, this jelly's sting is completely harmless to humans. The cannonball jelly's bell is typically white with a purple or brown band at the rim and grows to about eight to ten inches in diameter. This jelly has the most muscular, and therefore least delicate, body of jellyfish. It's commonly found trapped in fishing nets around the world, earning it a spot on the commercial fisherman's pest list. (2)

Sea nettles, though sometimes semi-transparent and white, can be quite colorful. The bell reaches six to eight inches in diameter, and the tentacles extend down several feet. The powerful paralyzing sting accompanying these tentacles is used both for hunting and protection. In addition to the microscopic plankton and zooplankton that most jellyfish consume, sea nettles will go for slightly larger prey such as minnows, worms, and other jellyfish, which accounts for the powerful venom. Jellyfish tentacles are quite delicate, and they can't afford to be whipped around by thrashing prey. They would simply tear, so the paralyzing toxins must be 100% effective almost immediately. Sea nettles will also use this venom against predators, killing the smaller ones, paralyzing the larger ones long enough for an escape. To humans, their sting is comparable to the moon jelly's sting and will produce a painful rash.(1)

Comb jellyfish are not true jellyfish; they belong to the phylum Ctenophora, meaning "comb bearers" because their bodies sport eight rows of comb-like cilia that propel them through the water. They are usually colorless and transparent with spherical or oval bodies, though some species can be red, black, orange, or gold in color. They vary in length from a few centimeters to about a foot and a half. Comb jellies have no stinging tentacles like Cnidarians possess, but some have two sticky, retractable tentacles to catch prey. Despite their lack of stinging tentacles, comb jellies prey on fish nearly as large as themselves, along with the usual foods of plankton, fish eggs, and other tiny creatures. Aside from stinging tentacles, another major difference between comb jellies and true jellies is in reproduction. While jellyfish have two sexes, comb jellies are hermaphrodites, possessing both egg and sperm in their bodies; it only takes one to tango in this phylum.(10) One particular comb jelly, the sea walnut, is by far the most common "jellyfish" in Texas waters, and it's not unusual to catch hundreds, or even thousands, in a single ten-minute trawl sample. Sea walnuts have an oval-shaped transparent body and grow 7-12 centimeters long.

The name "man-of-war" is taken from a 16th century English armed sailing ship. The Portuguese man-of-war is not actually a jellyfish but a colonial organism made up of several separate organisms that each specialize in a particular task. These organisms are so highly specialized that they've lost the ability for independent survival. The stinging organisms cannot feed themselves, the eating organisms cannot move or defend themselves, etc.(4) Measuring only about twelve inches long and five inches wide, the man-of-war's tentacles can reach 164 feet, though thirty feet is the average. This "jellyfish" has an air filled bladder that floats on top of the surface and is generally a purple-blue color, earning it the nicknames bluebottle and blue bubble. The bladder acts as a sail and can inflate or deflate, but the man-of-war has no other means of locomotion. For this reason, man-of-wars are often found in large groups as the wind, tides, currents, etc. have pushed them together. The sting, though excruciating and long-lasting compared to other jellies, is not usually fatal. Even dead man-of-wars can deliver a sting, so stay away when they wash up on land as well as when you're in the water. Of course, it's important to realize that jellyfish don't 'attack' humans. The sting is just a part of their natural survival.(1) (Fun Fact: the tiny Nomeus gronovii fish lives in the tentacles of the man-of-war and is immune to its sting!)

The first order of business for a jellyfish or man-of-war sting is to get out of the water as severe stings can cause the victim to go into shock. Next, remove the stinging tentacles from the skin. Use a stick, towel, credit card, anything but your bare hands. Flush the area with sea water. If the sting is NOT from a man-of-war, there are a variety of substances you can apply (with varying degrees of success) to reduce the effects of the sting. Meat tenderizer and papaya contain an enzyme that can inactivate the toxins. Applying vinegar or hydrocortisone cream/lotion may also bring relief. Although, these solutions will sometimes cause more stinging cells to fire. No form of alcohol should be used because it stimulates the stinging cells, as does human urine. Heat in the form of hot water or packs will help relieve the pain. If the sting IS from man-of-war, do not use fresh water or any of the aforementioned solutions for jellyfish stings. Since the man-of-war is not a jelly, the solutions which would neutralize jelly venom can worsen the sting of a man-of-war. Remove the tentacles and/or stingers, rinse with sea water, apply heat, and seek medical advice. Victims of any serious stings or with allergic reactions to stings should seek medical attention immediately.(5) Recovery times can vary from several minutes to several weeks.

Jellyfish stings are nasty business to have to deal with, but we shall have our revenge! Yes, we shall create a NEW jellyfish, one that requires no vinegar when innocently brushed against! One that will confuse predators and take the jellyfish's place as the rightful prey of sea turtles, swordfish, salmon, and tuna! The plan is already in motion; the plastic bag, once the decoration of choice in cities, is fast becoming the oceans' new jellyfish! We shall usurp the jellyfish's place in the ecosystem!

....Strangely enough, this is actually happening. Sea turtles, such as the highly endangered leatherbacks and loggerheads, and other marine animals mistake plastic bags and other trash for their meal of choice: jellyfish. When swallowed, plastic can clog an animal's throat, esophagus, and intestines. If the animal doesn't choke to death and continues ingesting plastic, it will slowly starve to death.(6) One autopsy performed on a dead sea turtle revealed 1,000 pieces of plastic in its stomach (7), and according to the US Environmental Protection Agency, Americans use more than 380 billion plastic bags and wraps each year.(8) How many of those, masquerading as jellyfish, end up in sea turtle stomachs? How many end up blocking the cooling intakes on boats or wrapping around propellers?(9) Let's save ourselves and the ecosystems a lot trouble by reusing or disposing/recycling of trash properly.