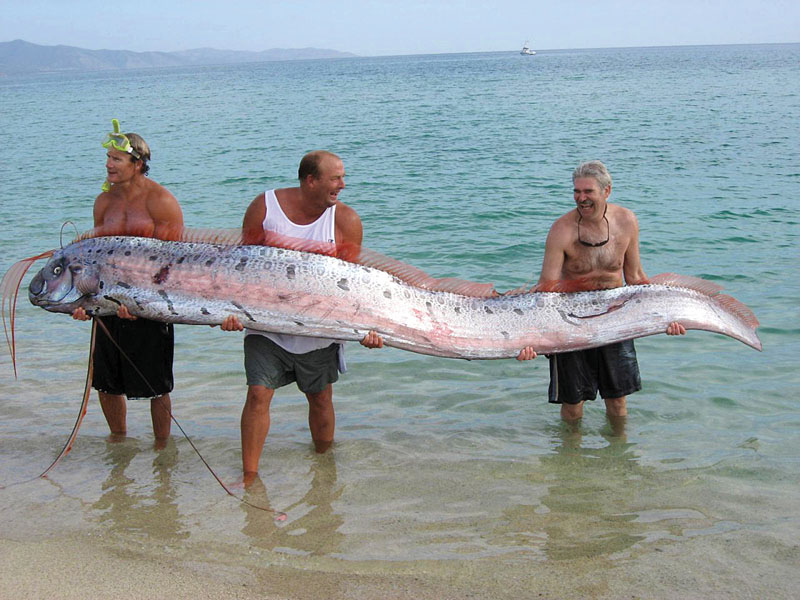 Aye, she be sliver, with a fin of fire, like a big dragon.
A serpent from the depths of hell it be...
~ Sea Story

With its long, serpentine body and prominent red dorsal fin, the giant oarfish is a likely culprit behind legends of sea monsters and dragons, spawning tales of demonic creatures rising to steal crewmen and sink ships. Historical reports from the 1800s of a 56-foot serpent-like fish found on the shores of Scotland, believed now to have been an oarfish, may have spawned the legend of the Loch Ness monster (although the habitat makes this theory somewhat improbable). Though mainly restricted to the ocean depths, oarfish large and small have been found floating on the surface or washed ashore in warm and temperate seas worldwide. A sputtering oarfish may look like a terrifying sea monster, but it's basically harmless. Since first being described by Peter Ascanius in 1772, the giant oarfish, Regalecus glesne, has become somewhat of a celebrity in the marine biological world. In recent times it's attracted more serious scientific study, but with one significant obstacle the oarfish's habit of swimming near the surface when ill or dying means that the specimens available for study were almost always dead or dying oarfish which had washed ashore or entered shallow waters under stress. There's only so much you can learn from an animal's remains. Luckily, in the last decade, several videos of live oarfish have surfaced, most capturing the last moments of life, but one special video caught the king of herrings, quite by accident, in it's own kingdom, deep in the Gulf of Mexico.

The "king of herrings" is so named because it was once believed that it swam in front of the herring shoals, as if leading them. Its common name, oarfish, is probably an allusion to the shape of its pelvic fins, or else it may refer to the long slender shape of the fish itself. The genus name, Regalecus, means "belonging to a king." The species name, glesne, is from Glesnaes, the name of a farm at Glesvr, Norway, where the type specimen was found. They are also known as ribbonfish because of their slender form, or rooster fish because of their bright red crests of fins.

The maximum reported length of the oarfish is 36 feet, although it is more commonly observed at lengths of approximately 10 feet. The maximum published weight of this species is 600 pounds. It is the world's longest bony fish (a few cartilaginous fishes, such as basking and whale sharks, may be longer). It has a long, ribbonlike body with a red dorsal fin running its entire length. The dorsal fin is longest in front, making a cockscomb on the head. The pectoral fins are small, but the pelvic fins, lying just under them, are long and slender, broadening at their tips, like oars. The body tapers to a tiny caudal fin, which is entirely lost in some specimens. There is no anal fin and no scales. The skin is covered with tubercles (small, rounded, epidermal projections present on the head, body, or fins of some fishes). The body is gray to silvery with dark, wavy streaks or blotches. Its fins are pink or coral red. It has a concave head profile, large eyes, and a highly protrusible mouth, a characteristic of the order Lampriformes.

The giant oarfish has a worldwide pelagic distribution. It is believed to be oceanodromous (living and migrating wholly in the sea). It has been found as far north as 72N and as far south as 52S, but is most common in tropical to temperate oceans. Oarfish feed almost exclusively on zooplankton, though they will also eat very small fish, jellyfish, and occasionally squid. Toothless protrusile jaws suction krill-laden water into the mouth and over long, bristly gill rakers. Gill rakers in fish are bony or cartilaginous structures that project from the gill arch and prevent food particles from exiting the spaces between the gill arches. Giant oarfish are notoriously bad swimmers. While they have the ability to undulate their bodies, in true serpent fashion, more often their long bodies remain still while their undulating dorsal fins do all the work (a type of locomotion called amiiform swimming), so it's a good thing the oarfish doesn't need to chase its food down. It just hangs vertically in the water column, sort of drifting with the currents, filtering water as it goes.

Although little is known about oarfish habits and life cycles, spawning has been observed off of Mexico between July and December. The eggs measure 2-4 mm in diameter and contain numerous oil droplets. After spawning is complete, the fertilized eggs are pelagic, remaining at the surface of the ocean until hatching. Upon hatching, the larvae appear similar to adults but in miniature and feed primarily on plankton until they mature. They occasionally associate in pairs, but there have been no observations of groups larger than three or any type of schooling behavior. Large adults sometimes kill themselves by swimming out of the water onto beaches or rocky outcroppings. Although the behavior has been documented on multiple occasions and usually occurs in areas near upwellings of water from the deep, scientists as yet have no explanations for this odd behavior. And this isn't the only detrimental behavior oarfish have adopted.

There is no direct evidence of predation on oarfish. Nonetheless, all records over 5 feet long have shortened bodies. An oarfish's internal organs are all packed into the front quarter of its body, so it seems an oarfish could survive an attack by a predator, such as a shark, by sacrificing the tail end of its body. However, the injuries on collected oarfish were notably not consistent with shark bites. The hypothesis that oarfish have the ability to shed a body section voluntarily by separating the vertebrae in their "tails," like lizards, implies an explanation for the recorded injuries: autotomy (self-amputation). Since oarfish have no known natural predator, any autotomy is probably not for self-defense. Possibly it makes swimming more efficient, or has some energetic benefits. Being denizens of the deep, maybe they just crack under the pressure.

At the surface, it becomes apparent how soft and easily damaged these fish are. Their shiny scaleless skin is deceptively hard-looking. We mostly associate the shine on fish with scales, but actually, it is crystals on the skin beneath the scales that produces the shine, which becomes evident on scaleless fish, like the oarfish. Many beauty products on the market today have a pearly iridescent effect thanks to a molecule called guanine. This is a compound that fish naturally grow on their skin in the form of tiny crystals and that, combined with cytoplasm, creates the characteristic metallic luster. The form of the guanine on the fish's skin is anhydrous, i.e. it contains no water (which is pretty impressive considering they spend their entire lives in the water). The unique morphology observed in these crystals is designed to enhance their light reflective properties. The guanine crystals reflect light at every angle. Because fish skin does not suffer from a drop in reflectivity, the fish in question no longer stands out from its surroundings, perfect for hiding or hunting.

The giant oarfish has no commercial value due to the poor quality of its meat, which is gelatinous and generally considered inedible. However, it is considered a gamefish by some, and its cousin, the slender oarfish, has been caught with encircling nets and marketed fresh in some areas of Japan. In Japan, slender oarfish have long figured into folklore. Smaller than the giant oarfish, the slender oarfish, Regalecus russelii, is known there as the "messenger from the sea god's palace." Japanese myth holds that washed-up oarfish are a sign of an impending earthquake, a fable that regained popularity after several beached themselves before the 2011 earthquake and tsunami. Though deep-sea fish, such as oarfish, living near the sea bottom are more sensitive to the movements of active faults than those near the surface of the sea, oarfish found in nets or on beaches does not seem to be directly connected with earthquakes.

Another relative of the oarfish, the streamer fish, Agrostichthys parkeri, has been reported to be electrogenic, producing a mild shock when handled by humans. The slender and giant oarfishes don't seem to share their cousin's electro-talent, which might come as a relief since, according to the World Register of Marine Species, there are two occurrences of giant oarfish off the Texas Gulf Coast (and more off the coasts of other Gulf-bordering states). Scientists are just beginning to explore the deep waters of the Gulf like never before thanks to the GulfSERPENT project, a collaboration between marine scientists and energy companies such as BP, Shell, Chevron, and Petrobras working in the Gulf of Mexico. Though not aimed specifically at oarfish, videos of the king of herrings captured by GulfSERPENT (the same videos mentioned at the beginning of this article) offer a unique glimpse at a creature which, until very recently, was only understood in death.

Hell is Empty.
And all the devils are Here.
~ Sea Story


Where I learned about oarfish, and you can too!