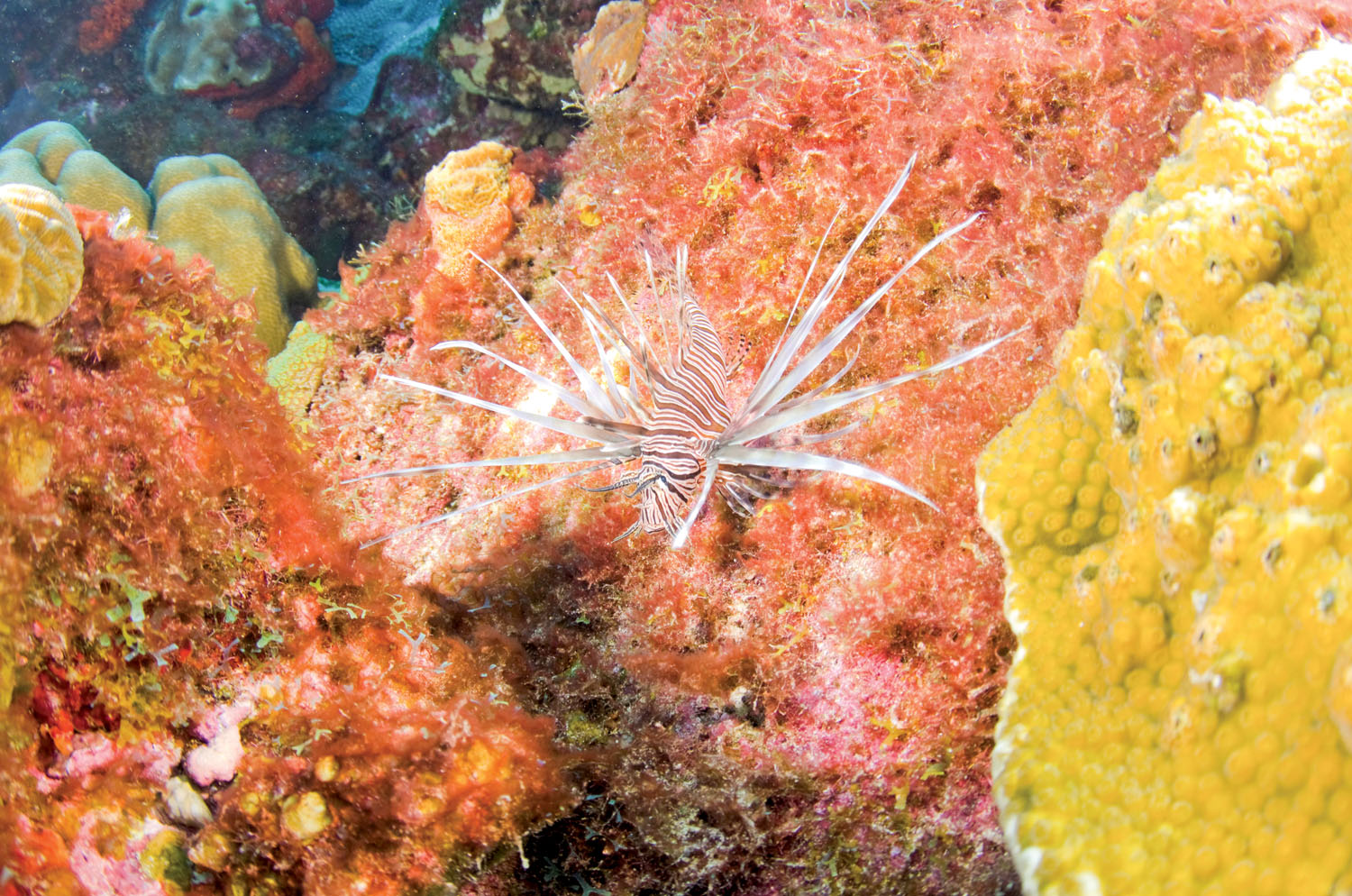 Lionfishes are among the most distinctive of all coral reef fish, notorious for their long, showy fins, stripy patterning, and venomous spines. Most scorpionfishes are colored to camouflage with their background. However, the lionfish is a notable exception with its extravagant dress and bold behavior, its seeming indifference to the potential threats posed by other reef-dwelling predators. Pretty much everything about the lionfish, including its cantankerous demeanor, says, "Don't touch!"

Members of the genus Pterois collectively known as lionfishes, turkeyfishes, and firefishes are natively found in the Indo-Pacific, but have found their way to oceans worldwide. They live in warm marine habitat types, including hard bottom, mangrove, seagrass, coral, and artificial reefs, from depths of less than 1 foot to 1000 feet. Our local invasive lionfish species is Pterois volitans, the red lionfish, also known as the butterfly cod, peacock lionfish, red firefish, scorpion volitans, and turkeyfish. Its many names are probably due to the fact that the species is widespread, easily observed, and potentially dangerous to humans. It is often mistaken for the devil firefish (Pterois miles). A relatively large lionfish, red lionfish can grow up to about 18 inches in length.

Lionfish have 18 venomous spines 13 long spines are located along the front of the dorsal fin; 2 short spines are located on the pelvic fins (one on each side); and 3 additional venomous spines are located along the front edge of the anal fin. The large, featherlike pectoral fins and the tail fin do not have venomous spines. Venom glands are located within two grooves of the spine. The venom is a combination of protein, neuromuscular toxin, and a neurotransmitter called acetylcholine. A sting from a lionfish is extremely painful and can cause nausea and breathing difficulties, but is rarely fatal. It is comparable to the venom of a stingray's barb. Treatment is also similar: the affected body part should be submerged in hot water (113 degrees F) for 30 to 90 minutes to denature the toxin. Medical attention is advisable. Luckily, the lionfish's venom is purely defensive. It relies on camouflage and quick reflexes for attacks, so people are mostly stung when they are trying to handle the fish. Also, the venom is contained in the last quarter of the spine, so it does not contaminate the meat.

Red lionfish live in small groups as juveniles and while mating. However, for the majority of their adult life they are solitary. Though lionfish typically finish supper within the first hour of night, they usually remain out and about until day. When the sun comes up, they retreat to ledges and crevices among the rocks and corals. Males are fiercely territorial while courting, which is often. Lionfish can spawn every four days, year round. Females can produce 30,000 eggs a month, each of which can hatch in four days. The young grow to a large body size early in life, so they are less likely to be attacked by predators, and their chances of mating successfully increase. They reach sexual maturity around 1 to 2 years. When lionfish are ready to reproduce, the physical differences between the sexes become more apparent. Males turn darker and the stripes become less dynamic. Females become paler, their belly, throat, and mouth becoming silvery white, making them easy to spot in the darkness. Lionfish live an average of 10 years in the wild.

As any aquarium enthusiast who ever put one in a tank with other fish discovered, lionfish are indiscriminate hunters. They are carnivores that feed on almost any crustacean or fish smaller than them, including the young of many important commercial fish species, such as snapper and grouper (that incidentally keep the reefs clean of algae, as well). They also adapt to new prey items quickly, which allows them to infiltrate almost any habitat with ease. Researchers have found that over a period of 5 weeks, a single lionfish can decrease the recruitment of new juvenile reef fish by almost 80 percent. Their stomachs can expand over 30 times in volume to binge feed when prey is plentiful, and they are capable of long-term fasting for periods of over 12 weeks when prey is scarce. Lionfish are ambush predators, primarily, though they will also stalk and corner smaller fish by spreading their feathery pectoral fins and herding the prey into a confined space for easy capture. Meals are ultimately obtained with a lightning-quick snap of the jaws and swallowed whole. This attack is so smooth that if the victim is among a group of fish, the other fish in the group may not even notice what happened. The lionfish can then continue to hunt the other unaware members of the school.

In the Indo-Pacific, the native ocean of the lionfish, sharks are known to prey on them with no ill effects to their health, but since they aren't native to Atlantic waters, they have very few predators. Native sharks and groupers are willing to eat the invasive lionfish, but sharks have yet to incorporate them fully into their diet, and unfortunately, Atlantic populations of grouper are currently suffering from over-fishing. There is hope that, through management, sufficient levels of groupers will return, providing an effective and natural means to help control lionfish. NOAA researchers have agreed that marine invaders, like the lionfish, are nearly impossible to completely eradicate once established. Instead, resource managers must help the ecosystem find a new balance where the invader is suppressed and plays a minor role, rather than overwhelming everything else.

Lionfish arrived in the South Atlantic in 1985, most likely released by private aquarium owners (experts speculate that people have been dumping unwanted lionfish from home aquariums into the Atlantic Ocean for over 25 years). The first official recorded occurrence of red lionfish in Texas was documented in 2011, though personal accounts date back to 2000. Currently, the red lionfish has a strong foothold in the Bahamas where, between 2008 and 2010, they reduced the biomass of 42 other fishes by an average of 65 percent. Efforts continue to prevent exponential growth in the Virgin Islands, Florida Keys, and Gulf of Mexico. The REEF Environmental Education Foundation organizes derbies: competitions across the U.S. and Caribbean for scuba divers to kill as many lionfish as they can. Tournaments have shown to be highly effective at reducing invasive lionfish populations, though with lionfish reproducing every four days, the effect doesn't last long.

Conservationists wrestling with the problem of invasive lionfish have suggested that recreationally and commercially harvesting the species for food could put a big dent in its numbers. Other fish populations have been decimated through overfishing for consumption, why not a fish that actually needs to be controlled and is sustainable? Plus, lionfish meat tastes good and lends itself to many recipes! (Although the lionfish is one of 400 species that can cause ciguatera poisoning, it poses no greater threat than others commonly eaten, including snapper, grouper, and hogfish.) The downside is, since lionfish must be killed one at a time, it's expensive to serve in restaurants. States have certainly done their part to encourage consumption. Texas allows unlimited removal by spear, net, or hook and line in state waters. The public can help spur demand (and perhaps commercial fishing innovation) by requesting lionfish. You can also report sightings to the Texas Parks & Wildlife Department, the US Geological Survey, the Reef Environmental Education Foundation (REEF), the USGS Nonindigenous Aquatic Species website, and the National Oceanic and Atmospheric Administration (NOAA). Whatever you do, if you happen to catch one, DON'T RELEASE IT! (How often do you hear that these days?)

Where I learned about lionfish, and you can too!

US Dept of Agriculture
www.invasivespeciesinfo.gov/aquatics/lionfish.shtml