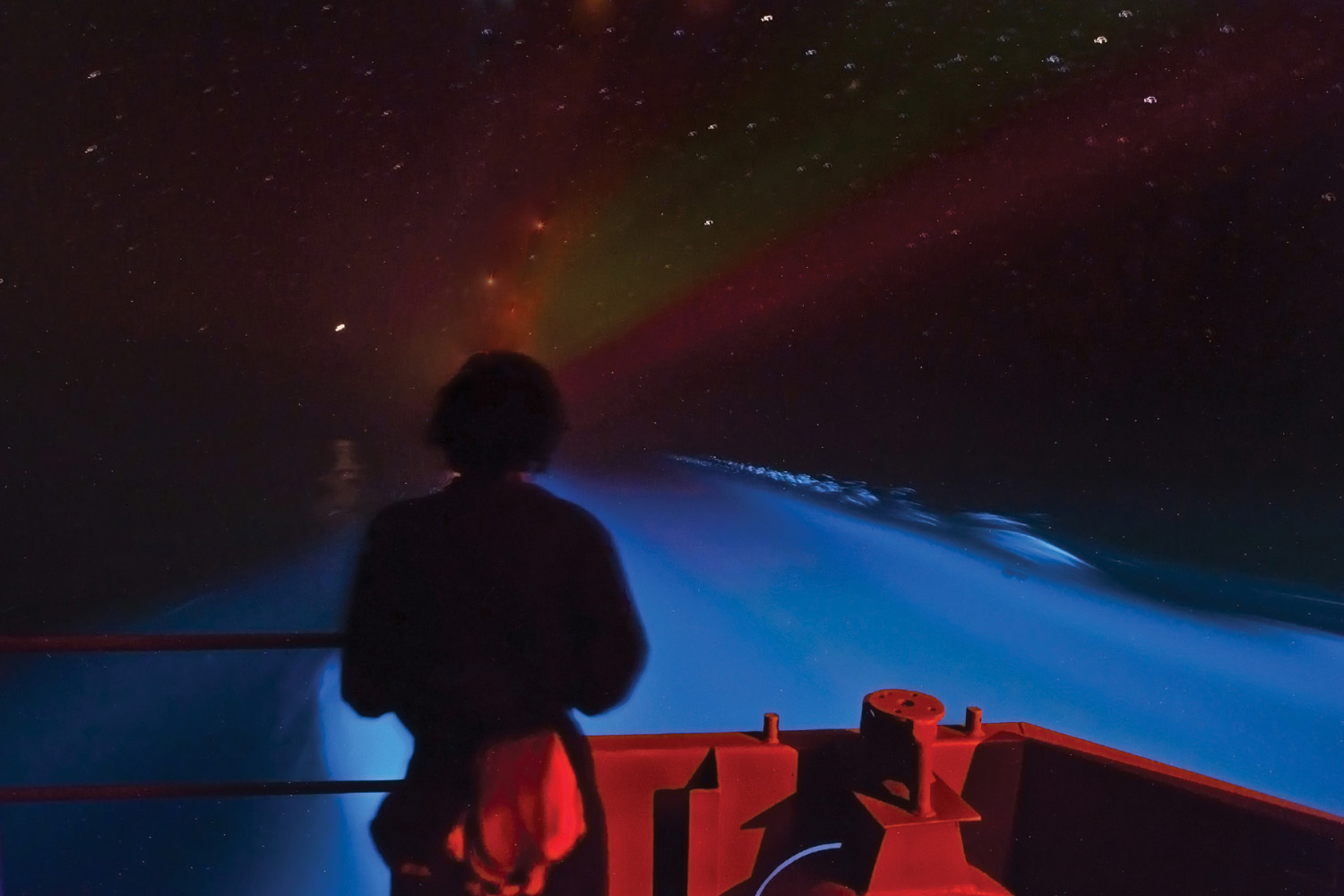 "While sailing in these latitudes on one very dark night, the sea presented a wonderful and most beautiful spectacle. There was a fresh breeze, and every part of the surface, which during the day is seen as foam, now glowed with a pale light. The vessel drove before her bows two billows of liquid phosphorus, and in her wake she was followed by a milky train. As far as the eye reached, the crest of every wave was bright, and the sky above the horizon, from the reflected glare of these livid flames, was not so utterly obscure, as over the rest of the heavens."
~Charles Darwin, Voyages of the Adventure and Beagle

Creatures that use their sense of sight to interpret the world around them often have a hard time operating without light. Some have evolved adaptations to compensate for low-light situations. For example, nocturnal animals often have large eyes, relative to body size, and pupils that dilate far wider than human eyes, maximizing the amount of light that enters into the eye. Many also have a tissue layer called the tapetum lucidum in the back of the eye that reflects light back through the retina. Some animals even see the infrared and ultraviolet spectrums. Bats use sonar when light levels drop too low for vision alone. Humans, on the other hand, make more light. But we're not the only animals, or even the first, to make light. Bioluminescent organisms also create their own light – and carry it around in their bodies. Bioluminescence is the production and emission of light by a living organism as the result of a chemical reaction within that organism. It neither requires nor generates much heat, so it is sometimes referred to as "cold light."

Bioluminescent life forms live all over the planet. One of the most widely known luminescent creatures is the firefly. People often think of them as flashy adult insects, but firefly larva glow as well. Glow worms are also insects (the larva of various fly and beetle species). The eerie nighttime phenomenon known as foxfire is a glowing species of fungus that feeds on rotting wood. There are other luminescent creatures on land, but most of the world's bioluminescence exists in the ocean. Bacteria, algae, jellyfish, worms, squid, crustaceans, fish… all contribute species to the limelight. Though they can be found throughout the ocean's depths, most live in the twilight zone (also called the disphotic zone), so named because only a small amount of sunlight reaches these depths. In general, the twilight zone extends from about 660 to 3,300 feet deep. In this part of the ocean, bioluminescent animals, not the sun, are the primary source of light.

Light’s color is determined by its wavelength. Although the colors of the visible spectrum are different lengths, they all travel fairly equally through the air, and therefore, we see all of them. But light travels differently underwater because longer wavelengths, such as red, have less penetrating power than shorter wavelengths, such as blue-green, which is why most bioluminescence in the ocean is produced as blue or green light. Long wavelengths don't reach the deep sea at all. Being red in the deep sea is effectively the same as being invisible as many deep-sea animals have lost the ability to see red at all. However, some animals have taken advantage of their brethren's loss of red sight. Dragonfish evolved to emit and see red light, in particular. By shining red light in the deep sea, they can see all the other creatures without being seen themselves. Ever see footage from a nighttime critter cam that shines a bright infrared light? It looks almost as bright as day to the camera, but the animals are completely oblivious. The dragonfish is its own critter cam.

Very little is known, comparatively, about bioluminescent deep-sea creatures, partly because they're difficult to observe. Transparent and camouflaged organisms simply vanish, even in strong lights. Some bioluminescence can't be seen under ordinary visible light, and bringing deep-sea critters to the surface often kills their light. And their life. Luckily, bioluminescence isn't completely relegated to the deep. Some well-known displays occur right at the surface of the ocean. Many small planktonic surface dwellers are bioluminescent. With the right conditions, these dinoflagellates bloom in dense layers, causing a sparkly sheen in the waves at night. Charles Darwin wrote of another glowing manifestation: milky seas. These continuous glowing waters are sometimes large and bright enough to be seen by satellites, and it is thought that this light is produced by millions of bioluminescent bacteria and/or dinoflagellates.

Attempts to unravel the exact science behind living light have been in progress since the 1600s. It began when a chemist, Robert Boyle, discovered that bioluminescent fungus stopped glowing when it was deprived of air. But it's only recently that researchers have started to isolate the precise biological functions that create light, at least in some species. Different animals use different substances, so discovering how one species does it, or even multiple species, isn't the whole truth. It's also difficult to study since the process of capture often exhausts or destroys the light-producing organs. What does apply across the spectrum is that bioluminescence requires, at minimum, two chemicals: a luciferan and a luciferase. The luciferan is the light-producing substance. The luciferase is the enzyme that catalyzes the reaction. Introduce one to the other, and let there be light!

The terms luciferin and luciferase are derivatives of the Latin word lucifer, which means "light-bringer." They are generic terms rather than the names of particular chemicals. A variety of substances can act as luciferins and luciferases for the purpose of this reaction, depending on the species of animal. Often, the process requires the presence of other substances, such as oxygen, a charged calcium ion, or adenosine triphosphate (ATP is a molecule that stores and transports energy in most living organisms, including the human body). Dinoflagellates that dine via photosynthesis use a luciferin that resembles chlorophyll. Their luminescence is, predictably, brighter after very sunny days. Some shrimp and fish apparently manufacture their luciferin from the food they eat. A few species of midshipman fish, for instance, obtain luciferin through the seed shrimp they consume. Some animals have evolved symbiotic relationships with bioluminescent bacteria instead of creating their own light. These bacteria live in a light organ in the host's body. The bacteria produce light continuously, so to keep from also glowing constantly, the host either retracts or covers the light organ. A few animals can adjust the color of light they emanate by using a fluorescent substance, such as a green fluorescent protein. The protein absorbs the original blue-green light and emits it as a different color. A very few number of creatures can glow in more than one color. The railroad worm, a beetle larva, has a glowing red head and a glowing green body. Both the arrangement of luciferan molecules and the specific luciferase can affect the color of light produced. Because of all the variations in luciferins, luciferases, and how organisms use luminescence, many researchers believe that the ability to make light has evolved independently at least 40 times.

Now you know the "how." Let's talk about the "why." Reasons include, but are not limited to, eating, mating, hiding, and screaming for help (when hiding fails). That's life in the ocean? Many marine animals use light as a lure to catch prey. Sometimes the prey is as small as plankton, such as those attracted to the bioluminescence on the suckers of the Stauroteuthis octopus. Other times, the prey is as large as whales. The cookie cutter shark has one dark patch on its belly that resembles a smaller fish when viewed from below. When a large predator approaches, the shark bites off a chunk and flees. This technique allows the cookie cutter shark to prey on whales and squid several times larger than itself. Probably the most well-known light lure is that of the deep-sea anglerfish, who dangles it off a "rod" protruding from its forehead and lures little fish into its mouth. And we've already talked about the dragonfish, whose red light lets it stalk its prey in plain sight, so to speak.

Fireflies flash at one another in species-specific patterns to find mates, and it's assumed that light shows serve a similar purpose in deep-sea fish. However, a strong flash is probably meant to scare off an impending predator. Squid are famous for squirting ink at their predators to leave them in the dark. The vampire squid lives in the dark, but it still uses this classic defense, slightly modified. It squirts bright, sticky mucus to blind potential attackers. Bright and sticky seems to be a favorite misdirection tactic of many species. Another deep-sea squid doesn't bother with mucus, it detaches a whole bright, sticky arm to dupe the predator. Some species of sea cucumber go one step further; they detach glowing body parts and stick them on nearby fish, so the predator follows the (newly glowing) fish and loses sight of the (now dark) cucumber.

Lots of fish use countershading for camouflage in the ocean, but some fish use the more advanced form: counterillumination. Photophores on the underside of an animal can match the dim light patterns coming from the surface, making it more challenging for predators searching below to see their silhouette. If misdirection and camouflage both fail, there's always the burglar alarm, a glowing survival adaptation. If small fish begin to feed on plankton, the plankton start to flash (the combined flashes creating a glow), which attracts larger fish to eat the small fish, thus saving the plankton. Some predators even seek out communities of their prey's prey and wait for the alarm to flash.

While we don't know all of the reasons animals glow, people have discovered their own uses for bioluminescence. Some are still experimental. Bioluminescent trees, for instance, could help light city streets and highways, reducing electricity consumption and related carbon dioxide emissions. Scientists have given bioluminescent traits to non-luminescent animals in order to track the progression of cancer and Alzheimer's. A team in San Diego devised a way to illuminate nerves during surgery so that they are less likely to be cut accidentally. The technique has worked in mice, but has yet to enter formal trials. Bioluminescence clearly has great potential in medicine, but it also has a role in war. One of the last German submarines to be sunk during the first world war had disturbed enough bioluminescent organisms in the Mediterranean to produce a glow that could be seen from above the surface, resulting in the sub's discovery and destruction. But while the living lights spelled doom for the German submarine, they were the path to salvation for astronaut and navy pilot James Lovell. When Lovell's electronic navigation systems failed on board his aircraft, he switched off his cabin lights and followed the glowing trail left by the wake of the aircraft carrier. They led him to a safe landing. Here’s hoping we all have a trail of light to follow on our darkest day.

May the blessing of light be on you,
Light without and light within.
~ An Old Celtic Blessing

Where I learned about bioluminescence, and you can too!

The Lost Art of Finding Our Way
by John Edward Huth