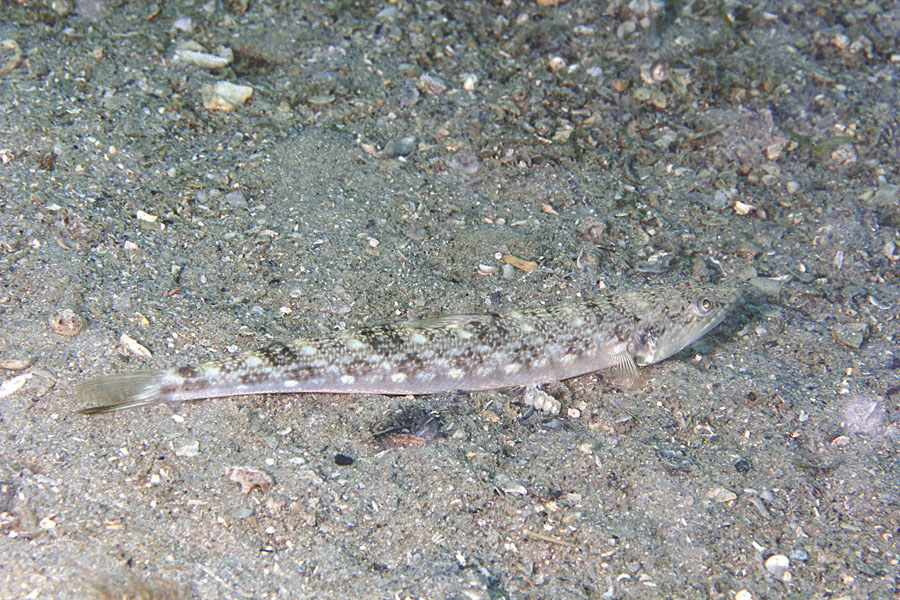 Inshore lizardfish, by Kevin Bryant.
Many animals are defined in the public eye by their most terrifying trait, and for several, that trait is teeth. Often it's for their sharp, penetrating teeth, such as vampire bats and vipers; or for their unnerving abundance of teeth, such as sharks or crocodiles. The lizardfish has the best of both worlds.

Teeth for killing. Teeth for intimidation purposes. Some more teeth because "teeth is cool." And then a few stashed away for a rainy day, because they're quite prudent about that sort of thing.

Lizardfish, nick-named "grinners" for their distinctively toothy appearance, are in the family Synodontidae. True lizardfish are bony, bottom-dwelling marine and estuarine fishes. They are generally small, though the largest species can reach about two feet in length. Their slender, somewhat-cylindrical bodies seem to be in a constant state of rigor mortis. You can pick one up by the base of its deeply forked tail, and its body will extend straight out from your hand. No flab on this fish. They are equipped with pectoral and pelvic fins below and dorsal and adipose fins above, and their bodies range from greenish, brown, grayish, or cream colored to reds, blues, and turquoises, depending on the species and the environment. They are heavily spotted and mottled, allowing them to blend in many habitats.

Two other fish families, Pseudotrichonotidae and Bathysauridae, are also sometimes colloquially known as lizardfish. Both of these families are very small and their range is more limited than that of the true lizardfish. The Pseudotrichonotidae are small relatives found exclusively in the southeastern regions of the Pacific Ocean. The Bathysauridae are found in much deeper waters than true lizardfish, below 5,200 feet, and have all the necessary deep-sea adaptations, including an almost-albino coloring, tubular eyes, and synchronous hermaphroditism (meaning each bathysaur is both male and female, because sometimes it's hard to find love in the dark). Studies regarding these deep-sea adaptations suggest that lizardfishes first arose in the early Cretaceous or late Jurassic with separate sexes. Synchronous hermaphroditism evolved a single time in the suborder Alepisauroidei, a clade of deep-sea Aulopiformes in the Early Cretaceous. (A clade is a group of organisms believed to have evolved from a common ancestor. Aulopiforms, meaning "flute-shaped," is the order lizardfish belong to, one categorical step broader than the family Synodontidae.) This is the oldest known evolutionary event of synchronous hermaphroditism in vertebrates.

True lizardfishes are benthic animals that live in shallow coastal waters throughout the world; even the deepest-dwelling species of lizardfish live in waters no more than 1,300 feet deep. They prefer sandy or silty substrates, as they sometimes bury themselves to hide from potential prey and predators. Originally, lizardfish were once thought to occupy a mid-trophic position as an ambush predator. It has since been discovered that some species occupy a high trophic position as active hunters that feed on other predatory fishes. In some systems, they are even considered the apex predators.

Of the eight species of lizardfish residing in the Gulf of Mexico, the species most commonly encountered in the bays is the inshore lizardfish, Synodus foetens. The etymology of Synodus is of Greek origin: "syn," meaning symphysis or grown together, and "odous," meaning teeth; and teeth are what these fish are all about. They even have teeth on their tongues! The meaning of foetens is easy to guess if you're familiar with the word "fetid," sometimes spelled "foetid." It means STINKY. After death, they deteriorate rapidly, and smell foul(er than other dead fish).

Also called sand pikes or galliwasps, inshore lizardfish are brown or olive in color on top / yellow or white on bottom, with a row of white spots down the upper side and a row of brown spots down the lower side. Young fish have sides that are darkly mottled; these blotches fade in older fishes. The snout is pointed and the mouth is large and wide, with the upper jaw extending beyond the eye. Their eyes look like alligator eyes. They regularly grow over a foot in length; while they're usually under 16 inches, they can reach 20 inches and two pounds. You can find little 3-4 inch ones in shallow, sandy beach areas. Adults seem less choosy about bottom types, and can be found over sand, mud, or oyster reefs, and in grass beds. In sandy substrates, they often bury themselves in the sand by vibrating their bodies. One habitat they don't seem to occupy is the high-energy beach surf zone.

They are found coastwide, from beaches out to 600 feet deep, although they are far more common in inshore habitats, hence the name. Though lizardfish can often be found in close proximity, they live a solitary lifestyle, except when spawning. Unlike other species within the order Aulopiformes, many of which are synchronous hermaphrodites, lizardfish are dioecious, meaning there are distinct males and females. They do not build nests, nor do they guard their young. Instead, females deposit their eggs along the reefs at depths of 100 feet or more, and males follow behind fertilizing the eggs. In the southern Gulf of Mexico, peak spawning activity takes place between March and June. Once hatched, the transparent larvae float freely in the water columns, and are mostly eaten by an array of predators. As currents carry them near estuaries, the juveniles drop out of the water column and become bottom-dwellers.

*Fun fact: When the larvae of some Aulopiformes were first discovered, they were so extremely bizarre-looking not resembling the adult animals in the slightest that they were not only described as distinct species, but even separated into distinct genera and a distinct family before their true identities were discovered.

Once the young lizardfish descend, that jaw full of small needle-like teeth is put to work catching large numbers of anchovies and silversides (which everything else in the sea seems to eat), along with some squid and shrimp for nutritional variety. Lizardfish lie in wait, sometimes buried in the sand with only their eyes exposed, but often perched on their fins under a rock or coral head. From this vantage point, they can dart both upwards and to the side to capture prey, as well as to escape larger predators. Their movements are so fast that the fish is almost invisible in motion.

Inshore speckled trout and redfish anglers have more interaction with this species than they realize. When something is just bumping your baits, and you can't seem to hook them, the culprit is likely to be a lizardfish. Anglers using natural baits, such as shrimp on the bottom, are more likely to land these reptilian fish. Most people take one look at the teeth and use any lengths to de-hook them without actually touching them. (If I throw enough insults about its parentage, maybe it'll just let go!)

Lizardfish are not dangerous to larger animals, like us, though their teeth can be unsettling to the unsuspecting snorkeler or diver. But if you choose to stick around for a closer look, they're often quite easy to approach; they think of themselves as masters of disguise. They'll sit completely still as you advance, convinced you haven't seen them. When it's obvious (even to them) that they've been spotted, they'll suddenly dart off, only to set up shop several feet away, where, once again, they think they're invisible. Lizardfish might not be the brightest fish around, but they do have the best smiles underwater.


Where I learned about lizardfishes, and you can too!