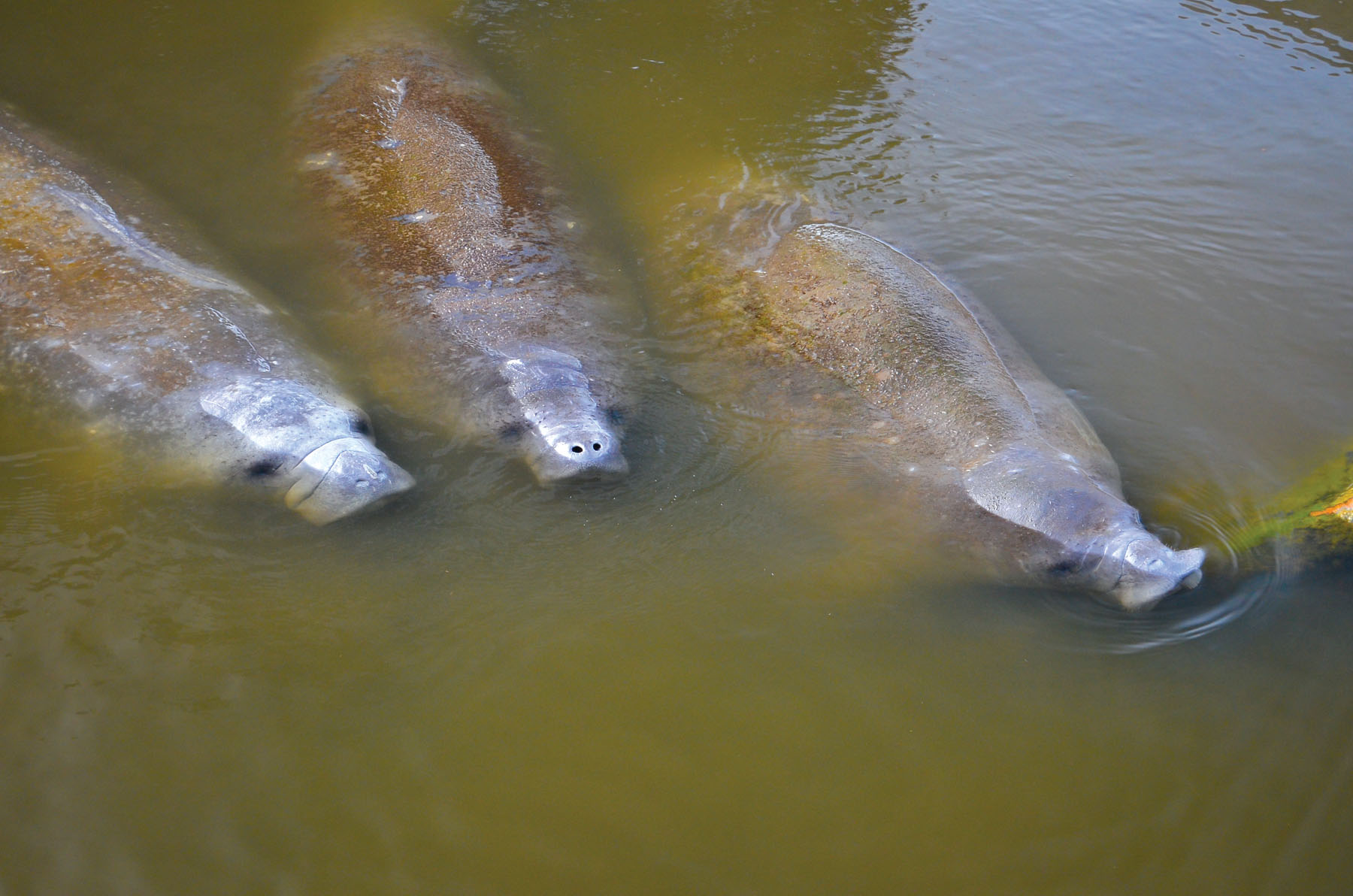 Photo by Chuck Palmer: flickr.com/photos/chuckpalmer/
Manatees are infrequent visitors to the Texas coast, but you might see one lingering on occasion. Some even show up regularly on an annual basis. The species that sometimes visits is the Florida manatee, Trichechus manatus latirostris, a subspecies of the West Indian manatee. Manatees have large streamlined bodies that taper to a flat, paddle-shaped tail. Their two front flippers each sport three to four nails, hinting at their closest relatives: elephants, aardvarks, and hyraxes (small, gopher-sized mammals). In ancient times, sailors might have mistaken manatees for mermaids or sirens, on account of their long tails. Coincidentally, their Order name, Sirenia, is derived from the sirens of Greek mythology. Though the fossil records are incomplete and the relationship between manatees and their ancestors is relatively unknown, manatees and their present-day cousins are usually classified as subungulates, meaning they may be evolutionary offshoots of ungulate (hoof) animals.(1)

All sirenians prefer the shallow waters of saltwater bays, slow-moving rivers, canals, estuaries, etc. They can inhabit fresh, brackish, and saline waters, moving freely between extremes. Any warm waterway over about three and a half feet deep is fair game, though they prefer areas with high concentrations of vegetation. The Florida manatee's range is primarily Florida's coast but can extend as far north as Rhode Island and as far west as Texas. Typically, they winter in Florida's waters and range out during warmer months. In the past, manatees would congregate at natural warm-water springs along the Gulf coast during winter. Now, power plant outfalls and other warm-water discharges serve as winter destinations and have extended the northern wintering range of manatees.(1)

Adult Florida manatees average about ten feet long and weight 800-1,220 pounds. Their true color is gray, though they may appear more green or brown if they have algae or similar organisms hitching a ride. They have no outwardly discernible neck, and indeed, cannot turn their head since they have fewer vertebrae than required for this action. To look around, a manatee must turn its entire body.(2)

Manatees have a large flexible upper lip covered in sensitive whiskers and 24 to 32 molars in the back of the mouth. New molars grow in the back and move forward to replace the front molars as they wear down. This particular dental adaptation is found only in modern manatees, suggesting that earlier manatees had a very abrasive diet. Today, they eat over sixty species of plants, including turtle grass, manatee grass, shoal grass, mangrove leaves, algae, water hyacinth, acorns, and hydrilla.(1) They also occasionally ingest snails and other small organisms attached to plants. While they typically only eat vegetation in the water, they occasionally haul themselves partially onto land to eat waterside plants or to crop low-hanging branches. They consume anywhere from four to ten percent of their body weight a day. To accommodate the large volume of high-fiber food, they have intestines up to 150 feet long (compared to the average 25 feet in humans).(2)

Manatees are adapted for hearing low frequency sounds and may actually have a greater sensitivity to low frequencies than any marine mammal studied. They communicate in a series of chirps, whistles, and squeaks. Most vocalizations occur between mother and calf or when water is murky.(2) They have well-developed eyes and can detect objects in the water over thirty feet away, probably in both dim and bright light. They also, most likely, have some degree of taste and smell, but not much has been studied on those subjects. Touch seems to be very important to manatees. Body contact between mom and calf is common. Occasionally, manatees will initiate body contact with divers along with inanimate objects such as ropes, buoys, logs, and rocks.(1)

Manatees are excellent swimmers, able to swim vertically and upside down and perform rolls and somersaults, but the deepest any has been recorded to dive is thirty-three feet. Like all marine mammals, they have special physiological adaptations for diving. To conserve oxygen, they have a slower heart rate while diving, and they renew about 90% of the air in theirs lungs in a single breath (humans renew only about 17%). However, unlike whales and dolphins, manatees' muscles don't contain the high concentrations of oxygen-binding proteins their deep-diving cousins' do.(1) They've evolved with their own adaptations for shallow-water living. Most mammal long bones have pockets for red blood cells, but manatee bones don't. They are solid and heavy which helps manatees sink to the bottom to eat plants.(3) The less energy they have to use staying down, the longer they can graze. Typically, they need to surface for air every three to five minutes, but when resting, they can stay down for twenty.(1)

Though manatees are not necessarily loners, they are not gregarious by nature. The basic social unit is mom and calf. Not that manatees avoid each other. Casual groups varying in age and sex form and disperse readily. Many congregate in warm wintering spots, and some groups have even been observed in loosely organized play.(1) While they can travel up to twenty miles per hour in spurts (useful for playing), they usually only cruise along at two to six mph (more useful for grazing).(2)

Manatees can live up to sixty years, if undisturbed. Typically, males (bulls) are sexually mature at nine or ten years of age, though a smaller number mature as early as two or three. Females (cows) mature around three. Though cows are usually larger than bulls, the species is not sexually dimorphic except for the position of the genital openings. While in estrous, a cow will mate with several bulls but does not form any lasting attachments. After a 12-13 month gestation, a calf is born, three to four feet long and weighing 60-70 pounds. Twins are extremely rare. Mothers nurse their young for a year, but calves stay with their moms for two years, learning about feeding and resting areas, travel routes, and warm water refuges. Cows give birth only once every two to five years.(1)

Although there's no documented predation, scientists suspect that manatees are occasionally attacked by sharks, alligators, or crocodiles. A certain percentage of deaths within a population are attributed to natural causes such as cold stress, gastrointestinal disease, pneumonia, parasites, etc. A much higher percentage is caused by humans. Habitat destruction, watercraft collisions, litter ingestion, entanglement in crab trap lines and fishing nets, and poaching all take their toll. Entrapment in flood control gates and navigation locks, resulting in drowning and crushing, is the second leading human factor for manatee deaths, the first being collisions with boats and barges. Watercraft are often just too fast for manatees to avoid. However, habitat destruction is fast becoming the most serious threat to manatee populations today.

All species of sirenians are endangered or threatened and are protected to some extent by national or local laws in every country they inhabit. Florida manatees are protected under federal law by the Marine Mammal Protection Act of 1972 and the Endangered Species Act of 1973 which make it illegal to harass, hunt, capture, or kill any marine mammal. All sirenians are protected under the Convention on International Trade in Endangered Species of Wild Fauna and Flora (CITES), an international treaty developed in 1973 to regulate trade of wildlife items.(1)

The manatee's role in the ecosystem is in cycling nutrients. Through defecation, manatees release nitrogen and other chemicals released into the water. The nitrogen is a necessary nutrient for plants and the chemicals, in part, balance the pH of the water. Of course, they provide only a very small part of the nitrogen and chemicals needed, but they are part of the collective whole that keep the nutrients cycling. Manatees also do humans a service by partially clearing plant-clogged river channels used for irrigation and transportation. So there's reason enough to keep these guys around. Plus, they're a special treat to see in our bays!