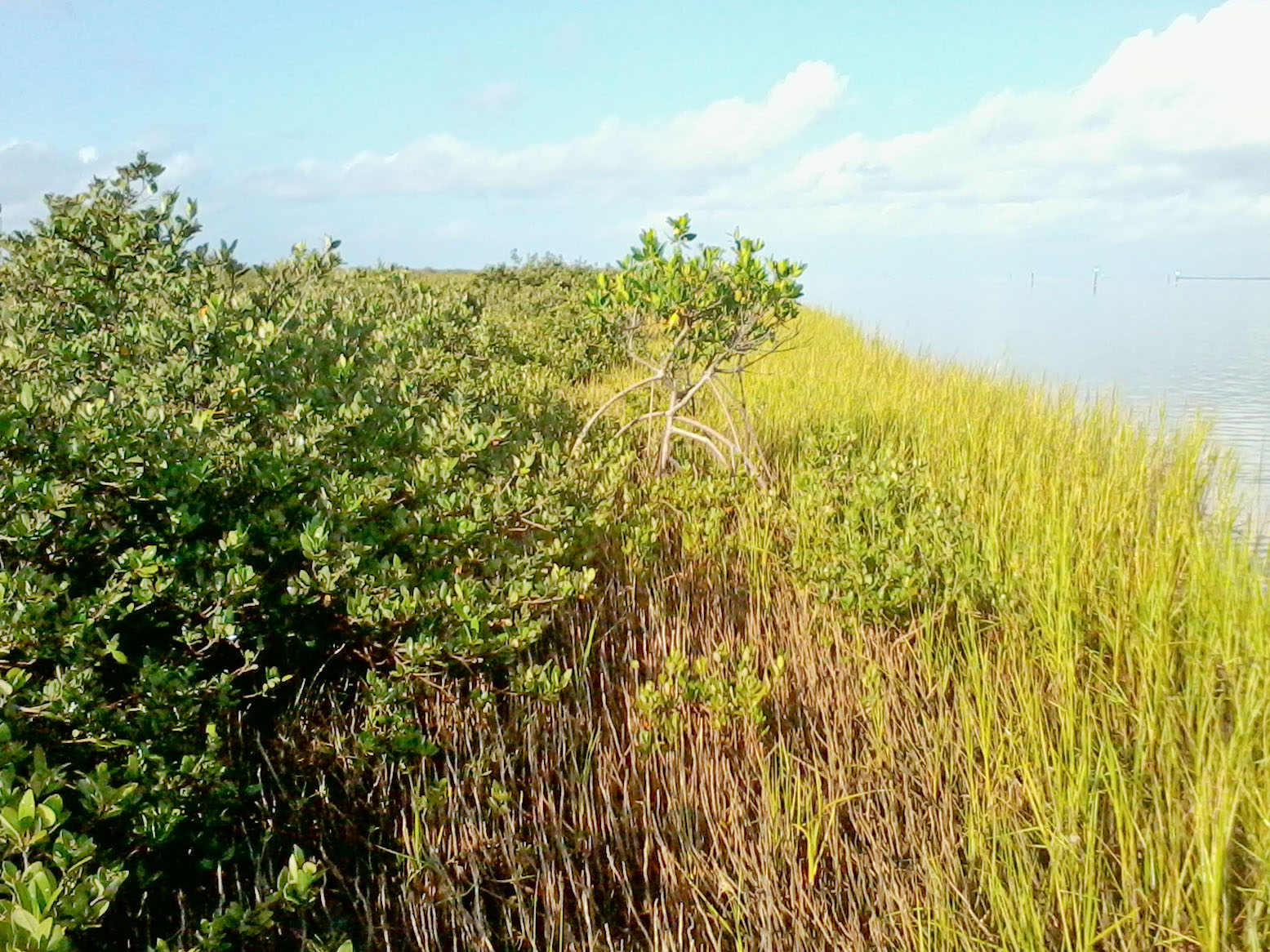 A red mangrove flanked by several black mangroves.
"One perceives a forest of jagged, gnarled trees protruding from the surface of the sea, roots anchored in deep, black, foul-smelling mud, verdant crowns arching toward a blazing sun Here is where land and sea intertwine, where the line dividing ocean and continent blurs; in this setting the marine biologist and the forest ecologist both must work at the extreme reaches of their disciplines."
~Klause Rutzler and Ilka C. Feller, Scientific American, March 1996


Described by some as half fish / half tree, mangroves are a diverse group of mostly trees and shrubs, unrelated, that have evolved similar abilities to live in waterlogged, saline soils inundated by the extremes of tides. As facultative halophytes (plants that would normally grow in freshwater but have adapted to tolerate or thrive under saline conditions), mangroves utilize several different of mechanisms to nullify the effects of highly saline conditions. Black mangroves are able to take up seawater through their roots and excrete the excess salt through pores, or salt glands, on the surface of their leaves. Red mangroves exclude the salt in seawater at the root-substratum interface. In salt-excluding mangroves, such as the red mangrove, the root system is so efficient in filtering out salt that a person could drink fresh water from a cut root, though the tree is standing in in seawater and saline soil.

Mangroves also filter materials moving between land and sea, trapping sediment, nutrients, and pollutants and preventing their direct introduction into sensitive marine environments, such as seagrass beds. Additionally, trapping sediments reduces both the turbidity of coastal waters, aiding the development of offshore reefs, and carbon emissions. Furthermore, because mangroves are highly resilient to disturbances, such as hurricanes, they play a valuable role in foreshore protection, reducing erosion and lessening storm surge impact.

The unique ecosystem created by mangroves is called a mangal. Mangals are among the most productive natural systems found throughout the world. Detritus, formed from the fallen leaves and branches of mangroves, provide a wide variety of aquatic denizens, such as mollusks, crabs, and worms, with a primary food source. Bacteria also break down the detritus, releasing useful nutrients into the water and giving mangroves their rotten egg smell (since the sediment is oxygen-poor, only bacteria that use sulphur for energy can thrive). These primary-level consumers, in turn, support an array of secondary consumers, such as small fish and juvenile predators, which grow up to be third level consumers (and so forth, we all remember 8th grade biology, right?). Ecosystems with high productivity (i.e. high levels of organic matter), in general, can support a large and diverse number of animals.

Mangrove forests provide breeding/nursery habitat and refuge for a variety of organisms, many of which are commercially or recreationally important, and are consequently intertwined with the biological productivity of coastal waters and the continuing success of tourism and fishing industries. Bird watchers, for example, appreciate the mangroves for the many and varied species they can support. But it's the anglers that are, by far, the largest (human) community that benefit from mangrove environments. Mangals on the Texas coast are comprised primarily of black mangroves, with a few isolated stands of red mangroves.

Black Mangrove, Avicennia germinans
"Black" refers to the color of the bark of a mature black mangrove. These are a subtropical, woody shrub, probably the most widespread neotropical mangrove species, certainly the most common on the Texas coast. They are adapted to sandy, silty clay loam, and muck soils and are generally found at slightly higher tidal elevations than red mangroves. Though they can tolerate a wide range of salinities, black mangroves require adequate protection from wave action and are sensitive to cold weather. In fact, the 1983 freeze killed almost all the mangroves from Padre to Galveston. In 1990, there were still virtually no live black mangroves, only skeletons of those plants killed in the 1983 freeze. Now, they are abundant from the mid coast south, anywhere salinity is above 20ppt (35ppt being full-strength seawater).

Black mangroves typically grow four to nine feet tall. Their leaves, larger than most mangrove leaves at five inches long, are elliptical, thick, leathery, green, and often encrusted with salt. The bark is thick with rough, irregular flattened scales. The root system consists of long, underground cable roots that produce hundreds of thin, upright pneumatophores (breather roots) in the water around the tree. These structures conduct oxygen through pores to the underground roots. Because of these breather roots and dense branches, black mangrove stands can be virtually impenetrable.

Clusters of small white to yellow flowers grow on twig tips and are pollinated, primarily, by bees. The fruits are flat, irregularly oblique-shaped, about one inch long, dark green, and smooth beneath a velvety covering. Propagules are small and bean-like, flattened. While they resemble seed pods growing downward from the fruit, propagules are actually embryonic root structures. When they are a fully germinated seedling, they will detach from the parent plant and are able, in the absence of suitable substrate, to float for up to a year in salt water without rooting. If they land on ground, they will immediately start developing roots. If they fall into water, they float horizontally at first, eventually shifting to a vertical position after a month or so while gradually losing their buoyancy, which increases their chance of connecting with useable substrate. If nothing is available for rooting, they regain buoyancy and return to horizontal floating.

Black mangroves have little direct commercial importance. They are used primarily for wildlife habitat along shorelines, intertidal salt marshes, barrier islands, and wetland restoration sites. Though they are threatened by habitat conversion, pollution, hurricanes, etc., total loss within this species over the last quarter century is only about 17%. It is listed as Least Concern on the IUCN Red List. However, it can be a difficult species to restore, so rates of decline should be monitored.

Red Mangrove, Rhizophora mangle
Red mangroves are native to the western coast of Africa and were introduced to the US. They are the most widespread mangrove on the planet (though not very common on the Texas coast). Of the numerous mangrove species, red mangroves grow closest to the sea. They are generally the dominant species of mangrove at or immediately adjacent to the water line. "Rhizophora" is Greek and means root (rhino) and to bear/carry (phora), referring to the numerous prop roots. "Mangle" is Spanish and means mangrove; it is the word used by the Taino people of the Caribbean Islands. Red mangroves were first described in 1753 by Linnaeus.

The height and growth rate of red mangroves depend on where they grow and what the conditions are. This is why dwarf varieties are found in the extreme north and south ranges of its distribution, where the climate is cooler and sunlight hours vary, while reds near the equator can reach nearly a hundred feet in height. Their leaves are also thick, elliptical, leathery, green, and rather large. They grow in clusters at the end of branches. Pollutants and excess salt in the sap are routed to older leaves, which yellow and fall off. The bark is gray-brown and smooth when young, becoming more furrowed when mature.

Reds are easily distinguished from other mangroves by their prominent stilt (or prop) roots. Stilt roots of a fully grown red mangrove can be sixteen feet long and extend in a radius of thirty-three feet around the trunk. They grow from the trunk or branches of the tree towards the soil, and if the root hits water instead of land, it will just continue trekking down until it reaches substrate it can hold on to. The primary function of stilt roots is to hold the mangrove in place against tides, waves, winds, and storms, and ensure growing room. Though we usually see only the sections above water (which are impressive in and of themselves), the entangled root system under water can be much, much larger. Young reds normally develop their first stilt roots around two years old.

A second important function of stilt roots is the exchange of gas. Mangroves often grow in mud with no supply of oxygen. Abundant pores, called lenticels, on the roots' surfaces connect to spongy internal tissues capable of holding large volumes of air. This provides pathways for the direct exchange of gases through the bark, which is otherwise impermeable to gases. When the stilt roots are submerged by the tide, the lenticels close, oxygen is used by the mangrove, and carbon dioxide is absorbed into the seawater. When the tide falls and the stilt roots are uncovered, the lenticels open and basically gasp for air, rapidly replenishing oxygen supplies.

Red mangrove blossoms are small and inconspicuous, usually white and/or yellow, and first develop around five years of age. They are hermaphroditic (containing both male and female sex organs in the same flower) and thought to be self pollinated or wind pollinated. The resulting fruits are small and brown. Propagules develop twice a year and are typically seven to twelve inches long with a brown, sometimes woody, lower third. Red mangrove propagules can also survive up to a year without rooting and are often distributed over long distances by water currents. This dispersal mechanism allowed red mangroves to conquer Central America, South America, and the Caribbean Islands.

The wood from the trunks of red mangroves has a high density, which makes it very attractive as timber for boats, houses, fences, canoes, fishing spears, and fire wood. It is also still used to produce charcoal. The tannins are used for dyeing leather. Bark fibers are pounded for cordage. Bark extract is used for treating intense localized pains, boils, diarrhea, dysentery, and fungal infections and guarding against stomach ulcers. Both the bark and leaves are antiseptic. However, reds are mostly used for reforestation of destroyed coastlines since they grow quickly and act as a sort of living armor, protecting coastlines from storm surges and whatnot.

In some parts of the world, where they have been introduced for coastal protection and stabilization, red mangroves have become an invasive species, outcompeting native coastal vegetation through the formation of dense thickets. Luckily, on the Texas coast, they seem to just stick to small pockets.

Scientists theorize that the earliest mangrove species originated in the Indo-Malayan region (southeastern Asia), which would account for the large variety of mangrove species present there, more species in one region than anywhere else. Because of their unique floating propagules, some mangrove species of the upper Cretaceous period and lower Miocene epoch (66 to 23 million years ago) spread westward, via ocean currents, to India and East Africa, and eastward to Central and South America. Mangroves are now distributed world-wide on all continents with tropical or subtropical coasts. There is no escape. (Except the arctic and antarctic)

Where I learned about mangroves, and you can too!