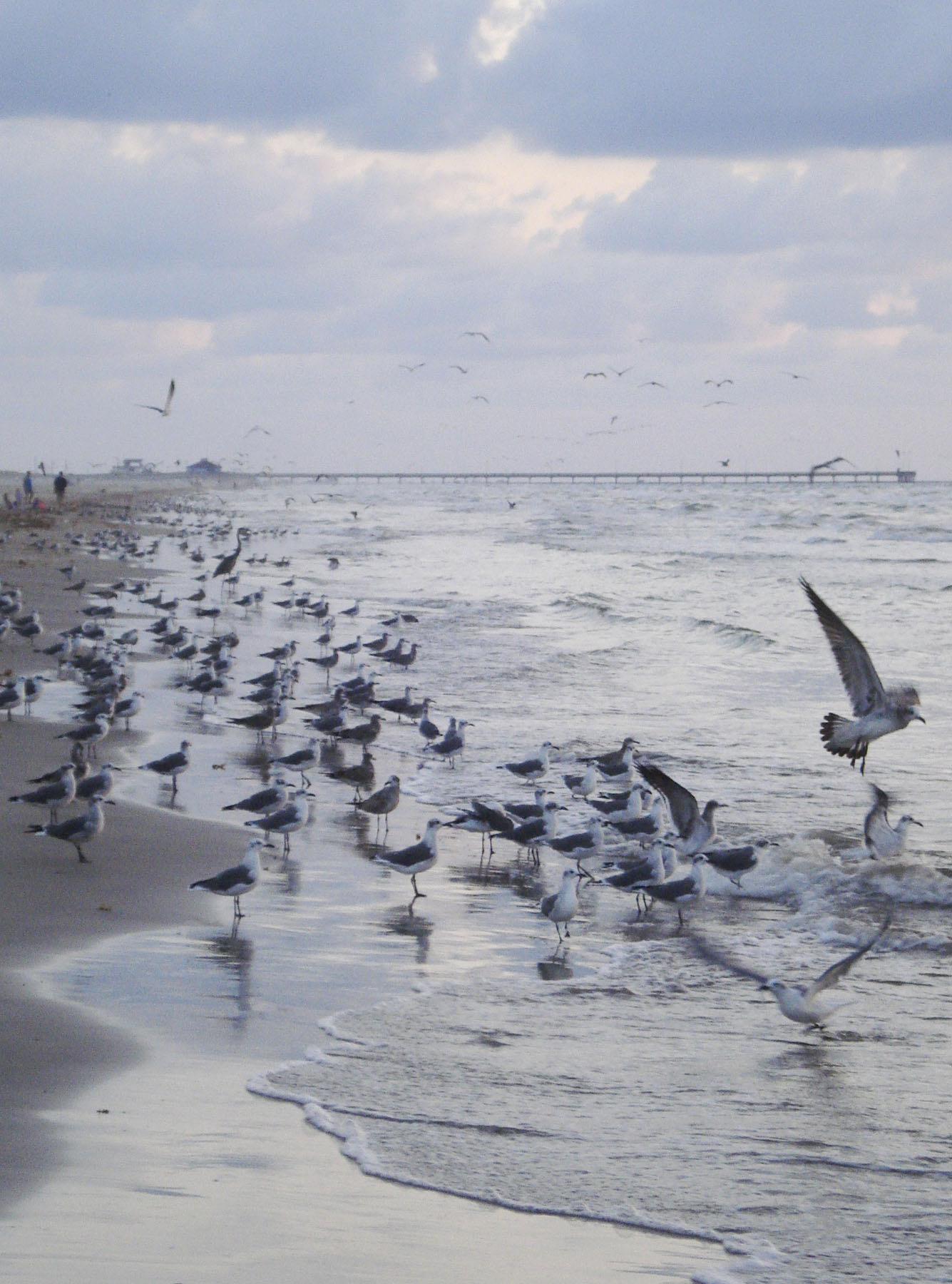 Hark to the whimper of the seagull.
He weeps because he's not an ea-gull.
Suppose you were, you silly seagull.
Could you explain it to your she-gull?
~Ogden Nash

If you've ever had a picnic on the beach, chances are you had a few extra guests. Gulls are just about the greatest opportunists in the bird kingdom. They adapt to almost any condition, and in a world filled with poisons, jet planes, and bull dozers, they jolly well have to!

There are over fifty species of gulls in the world (depending on the classifications of subspecies). They live in both coastal and inland habitats and are found on every continent near most large bodies water, both fresh and salt. Many species thrive in completely urban environments.

Gulls have a fairly distinct look and are easily recognized. Most have broad chests and abdomens with very short tails and slender necks. Strong webbed feet with small talons allow gulls to take off quickly from water but still walk well on land. Long, narrow, tapered wings give them a powerful and easy flight; they can soar for long periods without a single wing beat.

Bill shape can vary, but most are quite stout to take advantage of a wide diet. They are omnivorous and will forage for any food source, including trash, carrion and vegetation, but they will also actively hunt live prey: fish, crustaceans, squid, mollusks, insects/bugs, small mammals, and other birds (including eggs and chicks). One population off the coast of Argentina has even added right whales to their menu; when a whale surfaces to breathe, the gulls dive in and take a chunk out of the whale's hide. It has become such a problem for the whales that the government has considered declaring open season on the gulls. I guess ingenuity doesn't always pay off like you expect.

Gull plumage is not typically colorful, consisting mostly of white, gray, and black in adults. The legs and bill are often more colorful and are good tools for identification. Despite the lack of color, gull feathers were highly sought after in the Victorian era. In this "age of extermination," many creatures were over-harvested, especially birds with pretty plumage. By the late 1800s, even the very common gulls were almost endangered.

This fashion did collect its share of opponents. One man, in particular, began to attack the plumage market: George Bird Grinnell, one of the founders of the Audubon Society. He wrote, "A dead bird does not help an ugly woman look pretty, and a pretty woman doesn't need a dead bird for adornment." Due in part to Grinnell's efforts, a bill was passed in 1898 prohibiting the importation of plumes. Of course, that just meant harvesters had to look closer to home for their bounty. Duck hunters succeeded in having an amendment passed that exempted "web-footed water fowl," so gulls were, once again, fair game. Whole nesting colonies were nearly wiped out before public pressure finally abolished the feathery fad. Luckily, and obviously, gulls have since made a hearty comeback.

Gulls are distinct, not only in their appearance, but in their behavior, especially their vocalizations. While their calls are not so different between species, the classic "gull" call is easily recognized (though I've heard blue jays perform dead-on imitations). They're noisy birds in the best circumstances, and downright cacophonous in flocks. While it can be annoying for us, they see their actions in a different light, literally. Gulls see in color, but not the way humans do. Human eyes are capable of detecting three primary colors: red, green, and blue (the additive primary colors; we won't get in to the different sets of primary colors). Our brains can interpret all the color frequencies that exist around those three colors. Gulls see four: red, green, blue, and ultraviolet. In general, birds see more colors than humans. While we might not see a difference between a male and female gull, the difference is obvious to them. They also see a violet sky. Cool, eh?

For some cultures, gulls hold more significance than loud parties on the beach. Old-time European sailors believed gulls were the reincarnated souls of drowned sailors. The California gull is the state bird of Utah because of its role in wiping out an infestation of Mormon crickets that threatened the livelihood of early settlers. (Fun fact: Mormon "crickets" are actually a species of katydid.) Even now, all gulls in the United States, Canada, and the United Kingdom are protected by wildlife conservation laws, so even if they are silly, mischievous, or pesky, they are still seen in many cultures as creatures worth having around.

There are at least half a dozen species of gulls found (at some time of the year) on the Texas coast. The laughing gull has the distinction of being the only gull species to regularly breed here. They are a medium-sized gull, gray above and white below. Summer adults have a black head with white arcs around the eyes and a reddish bill. In winter, the black head becomes a gray mask. The legs are dark red or black. Male and female breeding pairs are monogamous and often stay together for several breeding seasons. The pair will build their nest together. If a male cannot find a mate, he may start building a nest in hopes of attracting a female. They nest in marshes, on islands, and on beaches, typically choosing a high spot to avoid tides or storm waters. Breeding colonies can be as large as 25,000 nesting pairs. Laughing gulls, like most other species of gulls, mature at two to four years of age; they can live up to twenty-two years.

Franklin's gull is a winter resident of the Gulf coast. Named for arctic explorer Sir John Franklin, who first collected the bird for science, this is a relatively small gull. In non-breeding plumage (which is what we would mainly see), the head is gray or patchy black with a white forehead and throat. The legs are nearly black, as well as the bill, except for a red tip. They have very similar breeding and non-breeding colorations to the laughing gull. This species is a frequent social bather. Large, boisterous bathing events may last up to twenty minutes. In addition to more frequent bathing, Franklin's gulls spend more time on the wing than most, make louder and more frequent calls, and is the only gull species that goes through two complete molts in both spring and fall. But their lifespan is only half that of the laughing gull's.

Bonaparte's gull is another winter resident (though many just pass through on their way further south). In fact, all the rest of the gulls we'll discuss are just using us for our warm winters. This is one of the smallest gulls in North America. It is named after French emperor Napoleon Bonaparte's nephew, Charles Lucien Bonaparte, a famous ornithologist in the 1800s. It has a white underside and breast, gray upper wings and back, black tips on the wings, a black bill with an orange lining on the mouth, and reddish-orange legs and feet. Unlike other gulls, Bonaparte's gulls don't scavenge for food at garbage dumps and the like. They have a more evolved palate

The ring-billed gull is a medium-sized gull: gray above, with a white body and tail, brown-streaked heads (non-breeding plumage), black wingtips with white spots, yellow legs, and a yellow bill with a black band around it (hence the name). This gull is sometimes called the "fast food gull" because of its habit of scavenging for food around fast food restaurants. Unfortunately, this diet is as unhealthy for the birds as it is for us. Fortunately, most don't live exclusively on fast food. They have a wide variety of foraging methods, including stamping their feet in shallow water to uncover small invertebrates, snatching flying insects on the wing, and stealing the ripest strawberry from your unguarded plate. You can sometimes see adults playing, repeatedly dropping objects and swooping down to catch them, perhaps a move to hone hunting skills. While this is a common species on coastal beaches, many ring-billed gulls lead entirely inland lives, never setting eyes on the sea.

Herring gulls are large with hefty bills and robust bodies. Adults have light gray backs, black wingtips, white undersides, dull pink legs, and white heads with dusky streaks. Chicks take four years to reach this adult plumage. They spend long hours loafing (a term behaviorists use to describe a bird that isn't doing much of anything). You've probably noticed them standing on one leg; many bird species do this. Here's the leading theory to explain this behavior: bird legs have a system of blood veins in their legs that minimize heat loss (so they stand on one leg to warm up a bit). It's an imperfect theory. The fact that birds also stand on one leg in warm weather means that staying warm is not the only function. Other theories include camouflage, one-sided brain function while resting, yoga When they do rouse themselves to find food, each gull has a specialty. Individuals often focus on a food type, and most choose marine invertebrates, such as crabs and sea urchins. Some have learned to bait fish by dropping bits of bread on the surface and attacking fish that come to feed on the bread. While herring gulls would prefer to drink fresh water, they can drink saltwater when they must. Like other gulls, they have special glands that allow them to secrete excess salt through their nostrils. Kind of like sea turtle tears.

Lastly, the lesser black-backed gull. This is a medium- to large-sized gull with a white head and underside, dark gray back, black wingtips with white spots, yellow bill with a red spot near the tip, and yellow legs. This gull, to a slightly larger degree than other gulls, will vary its foraging strategy when other large gulls are present. It may choose to specialize in aquatic invertebrates or freshwater fish, dig up food scraps at dumps, or plunge-dive to catch fish at deeper depths, if those are going to be the easiest pickings. And what's easiest might depend on who's waiting to steal from you.

So the lesson here is, even with a ludicrous amount of creativity and adaptability, birds are no match for women who want feathers on their hats.


Where I learned about gulls, and you can too!