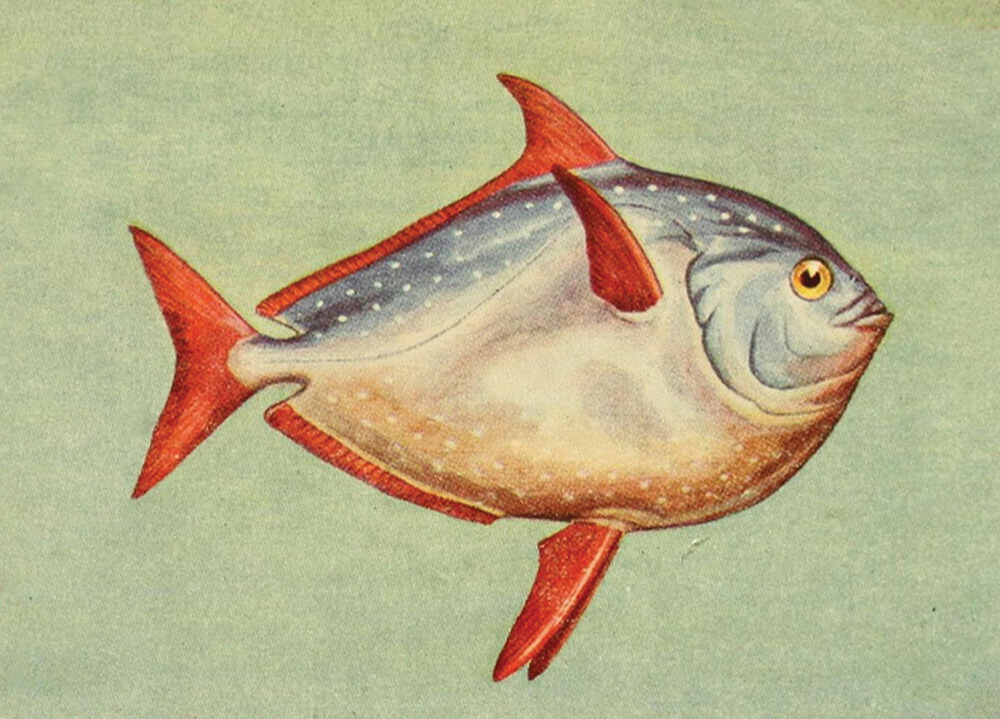 Image from the Biodiversity Heritage Library. Digitized by the Field book of giant fishes. | www.biodiversitylibrary.org

The moon can never breathe, but it can take our breath away with the beauty of its cold, arid orb.
~ Munia Khan

Most people have heard of the sunfish – the world’s largest bony fish, resembling a floating blob with fins. Fewer people know its (very distant and only superficially similar) cousin, the moonfish. Also commonly called opah, moonfish are large, disc-shaped, vibrantly colored inhabitants of the sea. The body is a steely blue on top, melting into green with silver and purple iridescence on the sides, a rosy belly, and covered head to tail in silvery spots and tiny, smooth scales. The fins and jaws are a brilliant scarlet, contrasting strongly with the body. Large eyes are ringed with gold. The mouth is small and toothless. Moonfish commonly reach four feet in length (or diameter, in this case) and 150 pounds, though they can grow a fair bit larger. Although traditionally recognized as one of only two species in the family, Lampris guttatus is now thought to consist of five distinct groups that differ in geographic range, genetics, morphology, and meristics (countable traits, such as the number of fins or scales). L. guttatus continues to reference our local Gulf of Mexico moonfish, though. The other (original) species of the family, Lampris immaculatus, refers to a rare species of the southern oceans. The genus name, Lampris, is derived from the Greek lampros, meaning brilliant, clear, or light; the Latin species name, guttatus, means spotted. Previously, the species name was the Latin regius, meaning king. So the moonfish has been demoted from the King’s Light to brilliant spots.

Opah are found wordwide in subtropical and temperate seas, apparently avoiding equatorial waters. They live from the epipelagic zones down through the bathypelagic. Epipelagic zones are where enough light reaches for photosynthesis. Bathypelagic is the dark, cold, deep sea (but not the deepest sea because there’s the abyssopelagic below that, and the hadopelagic even below that). The mesopelagic resides between epi- and bathypelagic; it’s the twilight zone. In the Western Atlantic, opah are found from Canada south along the U.S., Bermuda, the Bahamas, throughout the Gulf of Mexico and Caribbean Sea, and along South America to Argentina. They appear to be extending their range and increasing their prevalence in areas where they have previously been less common, such as the Mediterranean. This is likely due to warming water temperatures as a result of climate change.

There’s nothing about a moonfish that says ‘fast-moving predator’ – unlike the streamlined torpedoes that are sharks and tuna. By contrast, the moonfish looks like “a big startled frisbee,” with flippers taped to the sides. But they are surprisingly swift swimmers, flapping their pectoral fins in the same way penguins ‘fly’ through the water. They hunt mainly mesopelagic fishes, crustaceans, jellyfish, and squids. Lots and lots of squids.

Fish that inhabit cold depths like the meso- and bathypelagic typically tend to be slow and sluggish, conserving energy by ambushing prey instead of chasing it. Naturally, scientists assumed the moonfish would be the same. But L. guttatus has a major advantage: endothermy. Moonfish are warm-blooded. Other fish, such as tuna and white sharks, have regional endothermy, the ability to warm specific regions of the body, but the opah is the only vertebrate outside of mammals and birds known to circulate warmed blood throughout the body. A team from NOAA Fisheries’ Southwest Fisheries Science Center, led by Dr. Nick Wegner, made the discovery. Upon dissecting a moonfish sample, Wegner recognized the presence of unusual blood vessels in the gills. He had seen this type of intricate tangle of red and blue blood vessels before. They’re the retia mirabilia, Latin for ‘wonderful nets,’ and they’re the secret behind the heating system of tuna and white sharks. In those fish, the retia mirabilia are located in the swimming muscles and act as a counter-current heat exchange, similar to a car radiator. Veins that carry warm blood away from the hot muscles are interwoven with the arteries that carry cold blood in from the gills. But the muscles producing heat are the only body parts that stay warm; the heart still runs cold. In contrast, the opah's retia mirabilia are in its gills – so the cold blood coming in from the gills is warmed by the hot blood coming up from the heart (the bulk of the heat being generated by its unusually large pectoral muscles that are being used in continuous swimming). Whereas a tuna or shark isolates its warm muscles from the rest of its cold body, the opah isolates the cold gills from everything else. Thus, the entire body core – the swimming musculature, visceral organs, and the heart – are warmer than the surrounding environment.

Whole-body endothermy provides the moonfish with distinct advantages – increased swimming speeds, faster reaction rates, sharper vision, etc. – over its slower, cold-bodied prey, especially in the relatively deep and cold environment. In addition, unlike many other predators, moonfish do not need to return to surface waters to warm between feeding bouts, allowing them to continuously forage at depth. The NOAA team attached temperature monitors to moonfish and tracked their dives to 1,000 feet below the surface. Dr. Wegner found that their body temperatures remained steady even as the water temperature dropped sharply, maintaining an average muscle temperature about 5 degrees Celsius above the surrounding water. Opah don’t burn as hot as a bird or mammal, but they certainly outperform other denizens of the deep.

Moonfish are typically an elusive and solitary fish, though they sometimes school with tuna or billfish. Not much is known about their life history. They live their whole life cycle in salt water. Spawning occurs in the spring, probably. Their planktonic larvae lack any dorsal and pelvic fin ornamentation. The hatchlings later undergo a rapid transformation from a slender to deep-bodied form, usually complete by 10.6 millimeters. The difference between the sexes are noticeable in the pectoral girdle (basically the chest). In sexually mature males, the girdle is thick and concave, with a deep, abrupt angle. The female’s girdle is narrow, convex, and has a more gradual rounded angle.

Though it is not fished commercially through much of its range, moonfish is considered a good food fish and caught in low numbers as bycatch in Gulf of Mexico longline fisheries. Hawaii is an exception and boasts a major fishery. It is marketed fresh and frozen and also prepared as sashimi. The flavor is said to be distinctively rich and creamy, a cross between tuna and swordfish. Raw flesh ranges from dark red to orange to pink, and turns white when cooked. The texture is firm and fatty with large flakes. Happily, neither the commercial fisheries nor the bycatch represents a major threat to the global population, so moonfish are currently categorized as Least Concern by IUCN Red List.

There is something haunting in the light of the moon; it has all the dispassionateness of a disembodied soul, and something of its inconceivable mystery.
~ Joseph Conrad


Where I learned about moonfish, and you can too!