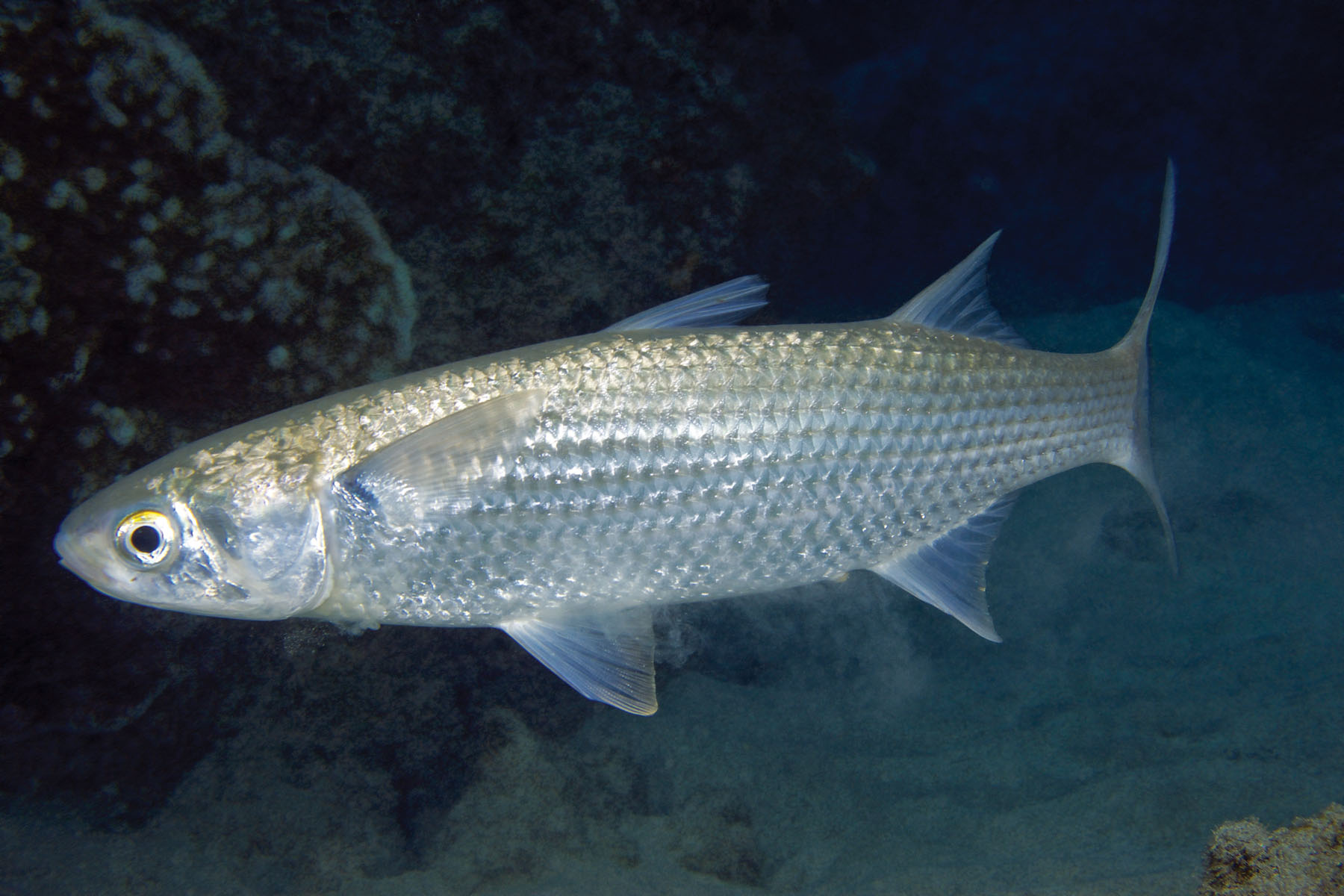 Striped Mullet. Photo credit: Keoki Stender www.marinelifephotography.com
The topic of the month is mullet. No, not that crazy hairdo you had in the seventies. The fish, of course. And the two most common mullet in Texas bays are the striped mullet, Mugil cephalus, and the white mullet, Mugil curema. Striped are by far the most common, so we'll stick with them. The two species really aren't that different anyway.

An adult striped mullet is cylindrical and torpedo-shaped with a blunt nose, several rows of inconspicuous teeth, thin lips, short pectoral fins, and two dorsal fins. Coloration consists of silver sides and belly with the back ranging from slivery-green to grayish-olive to dark bluish-green. Each pectoral fin has a dark spot at the base. If the mullet is six inches or longer, it will also sport prominent black stripes on the upper half of the body, running the length of the body, formed by dark spots at the center of each scale.(1)

Spawning for Texas species lasts from late October to January, with a peak in November and December. Mature adults leave the bays, collect in large schools (supposedly for carpooling purposes), and migrate 40-50 miles offshore to spawn in 400-600 feet of water, typically. Throughout the season, females scatter up to seven million spherical eggs in the water column. The eggs are transparent to pale yellow, and each contains an oil globule, making it rather buoyant. Parents do not guard the eggs, and most are eaten by predators (that goes for parents and eggs). The eggs that remain hatch within 36-50 hours, releasing mouthless and finless larvae (this is rectified in about five days, when jaws and paired fins develop). At 15-32 mm long, the larvae migrate to inshore waters. They spend the remainder of their first year in coastal waters, salt marshes, estuaries, fresh water creeks, etc. In autumn, when the young mullet are approximately two inches, they move into deeper waters while mature adults are off to spawn again.(1)

Sexual maturity is attained at about three years of age, or eight to twelve inches, with females maturing at a larger size than males. Their lifespan is typically seven or eight years (females living longer than males, on average), but there is a striped mullet on record that lived thirteen years. They can reach about twenty inches in length and typically weigh three pounds or less, though the largest on record was fourteen pounds. Striped mullet of all sizes are often prone to leaping clear of the water. Biologists don't all agree on the reasons for this behavior, but it could be to avoid predators or to clear their gills and be exposed to higher levels of oxygen (since they commonly spend time in low-oxygen areas).(3)

Like other fish, mullet serve an important role in the ecosystem, though actually, their role is reminiscent of the white shrimp's: food source and cleaning service. Mullet are prey to countless creatures including larger fish, sea turtles, water snakes, wading birds, pelicans, and dolphins.(3) For their own meals, mullet cruise along the seabed and suck up zooplanktons, bottom-dwelling organisms, and detritus (dead plants and animals), or they skim scum containing microalgae from the water's surface. Incidentally, they also pick up sediments in their consumption, which helps to digest the detritus in their thick-walled, gizzard-like stomach segments.(1)

So that's their environmental niche, but they have an equally important economic role. Mullet is regarded as an excellent table dish… in Florida. Off the western Gulf coast, they tend to take on an oily taste, and aren't a great candidate for some preparation styles (or for delicate palettes). However, as this doesn't seem to affect their appeal to game fish, mullet can make excellent bait. Spotted seatrout, red drum, southern flounder, and billfish are just a few of the contenders for mullet flesh. Several Gulf states harvest many tons of mullet for commercial use, and they aren't alone. Mullet are a very important commercial species around the world. Besides being a tasty main course in some places, and a useful bait in others, this fish is also prized for its roe (eggs).(2) Caviar anyone? (Okay, that's technically salmon, but you get the idea.)

So although mullet are sometimes described by anglers as the rats of the sea, they're pretty good neighbors to have, keeping other creatures well fed and cleaning up after everyone's messes. In Texas waters, it is illegal to keep mullet over twelve inches from October through January. This regulation arose after mullet populations along the eastern Gulf coast were put in jeopardy due to overfishing. Currently, their populations in Texas bays are doing just fine, and I, for one, hope they stay that way.