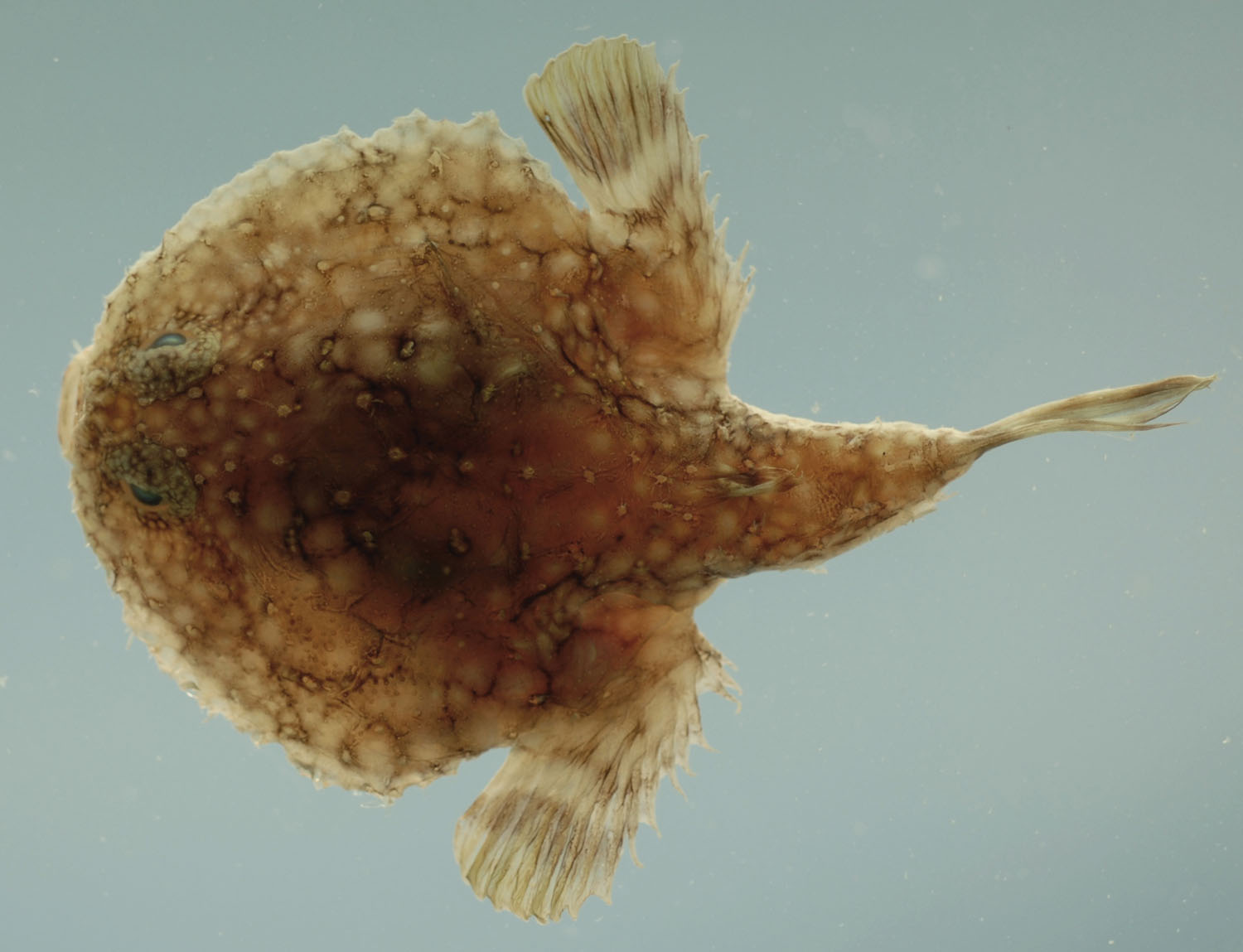 Pancake batfish, that is.

Okay, we know it's not a bat, but does this even qualify as a fish? Despite being round flat fish, they're not like a flounder. A flounder's 'top' and 'bottom' are actually its left and right sides. A pancake batfish is flattened from the top down: back facing up, belly facing down, often described as a pancake with feet.

If you think sea turtles are awkward on land, you should see these guys move. They have small foot-like pectoral and pelvic fins, complete with elbows, which they use to 'walk' along the ocean floor in a bizarre motion kind of like a crawling bat. As you can imagine, they aren't the most graceful swimmers. While they might not be the most elegant fish, one species became quite popular: the Louisiana pancake fish was named as one of the Top 10 New Species Discovered in 2010 right after being described as "remarkably hideous (in a good way)."

Batfishes occur worldwide in tropical and subtropical seas. Most species are bottom dwellers, inhabiting only soft bottoms, such as mud, sand, mangrove estuaries, and seagrass. During the day, they remain partially buried. There are several species in three, perhaps four, genera occurring in the Gulf of Mexico.

Pancake batfish belong to the anglerfish order, Lophiiformes. Yes, those creepy deep-sea dwellers with long, inwardly-curved teeth and a glowing fishing pole sticking out of their enormous heads. The fangs I mean, teeth are free of any snags that might hinder an unwary creature gliding in, but block any attempts at escape. The anglerfish can expand both its jaw and its stomach, since its bones are thin and flexible, allowing it to swallow prey up to twice as large as its entire body. Ranging in color from dark gray to dark brown, they can reach over 3 feet in length and weigh up to 100 lbs.

But not the pancake batfish. Most are small enough to fit in the palm of your hand and are about as thick as a fluffy pancake (though some can grow over 15 inches in length). They don't have the characteristic large, crescent mouth of the more sensationalized species of anglerfish; theirs is a small mouth situated on the underside of the body. But it can be protruded, for extra reach. Jaws and tongue have bands of villiform teeth (small, slender teeth so crowded they resemble bristles of a brush). Eyes are small and located on top of the head. Body is covered in tubercles (cone-like scales); some smaller individuals have small spines on the tubercles. They do tend to be rather drab in their coloration: browns and grays mostly, with varying spots or stripes and the occasional pink or reddish tint. But this also means they are well camouflaged, so it isn't too hard to get some grub.

Their diet consists of small fish, crustaceans, and polychaete worms. In true anglerfish style, the pancake batfish captures prey using a lure. Its fishing pole is formed from a modified dorsal fin ray on the front of the head, complete with a fleshy 'bait' on the end. When not in use, both pole and lure can be retracted into a cavity at the front of the snout. The lure doesn't glow, like the deep-sea anglerfish's; it secretes a fluid thought to act as a chemical attractant. A simple wiggle of its dangling lure is enough to entice dinner, without the indignity of clumsily flouncing around the sea bed on its four little fin-feet.

Although we don't know the batfish's exact place in the food web, tuna and marlin from the Gulf have been found with Louisiana pancake batfish in their stomachs. Batfishes are taken regularly in commercial fishing operations, but they are rarely eaten and do not support a fishery. Two new species of Halieutichthys batfish were discovered in the Gulf of Mexico in 2010, in the region directly affected by the Deepwater Horizon oil spill. In the initial trawl which led to their discovery, out of around 100,000 fish captured, only three were pancake batfish.

The first of the two batfish discovered in 2010, H. bispinosus (the two-spine pancake batfish), has a characteristic pattern of densely arranged spiny tubercles covering the body, reaches 4 inches in length, and is distributed along the northeastern gulf coast as well as along the Florida, Georgia, and Carolina coasts. "Bispinosus" refers to the well-developed inner and outer tubercles around the ear, which is unique to species within this complex. The second, H. intermedius (the Louisiana pancake batfish), has a smooth, non-spiny dorsal surface, reaches 3 inches in length, is only found in the Gulf of Mexico in a range entirely covered by the effects of the Deepwater Horizon oil spill, and lives at depths down to 400 meters. This rather restrictive distribution catapulted the Louisiana pancake batfish into the spotlight during the aftermath of the oil spill, and even now, if you Google pancake batfish, this species still steals the show. "Intermedius" refers to 'intermediate' character states observed in this taxon when compared to H. aculeatus and H. bispinosus.

Because of similar morphology and distribution, H. bispinosus and H. intermedius were originally classified with another species, H. aculeatus, the (original) pancake batfish. H. aculeatus is characterized by a comparatively sparse arrangement of spiny tubercles, reaches 3 inches in length, and has a geographic distribution similar to H. bispinosus. This species was re-described in 2010 when the two stowaway species were discovered. Several other species inhabit Texas Gulf seabeds: the Atlantic batfish (Dibranchus atlanticus), reaching 15.5 inches in length; the spotted batfish (Ogcocephalus pantostictus), reaching a foot in length and having a more triangular than rounded body; the longnose batfish (Ogcocephalus corniger), 9 inches; the slantbrow batfish (Ogcocephalus declivirostris), 6.5 inches; the polkadot batfish (Ogcocephalus cubifrons), 15 inches, not to be confused with the spotted batfish; the list goes on...

Although the Gulf of Mexico has been intensively and repeatedly surveyed by scientists, probed by anglers, and picked over by commercial fishing, it is still home to creatures not yet described. It's amazing how we can live so close to, and so intimately with a place and still have so much to learn about it.

Where I learned about pancake batfish, and you can too!

Fishes of the Gulf of Mexico, Vol. 1: Myxiniformes to Gasterosteiformes
By John D. McEachran and Janice D. Fechhelm