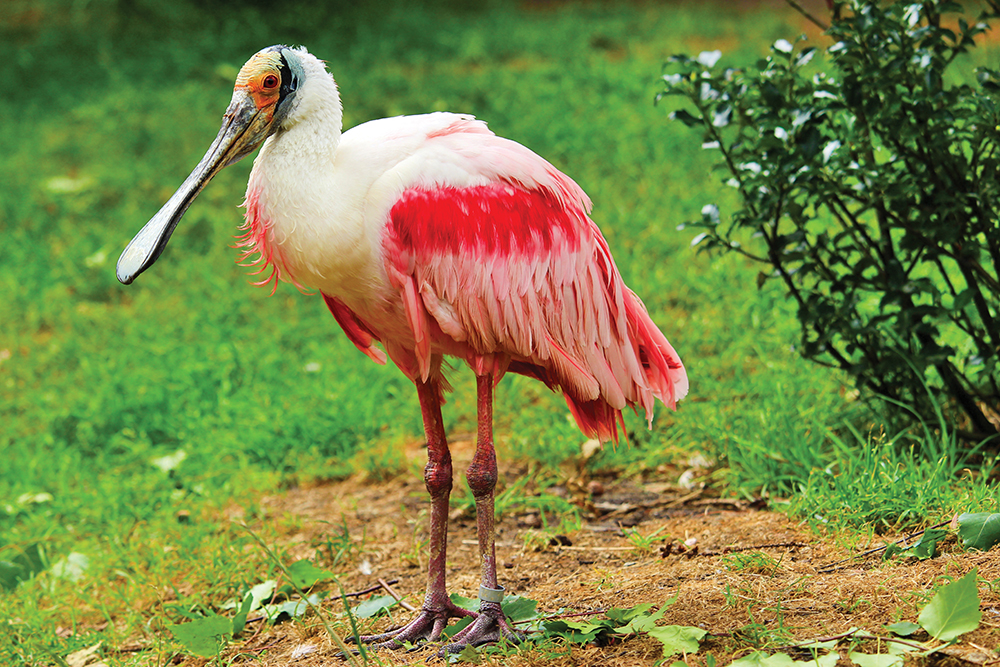 Image by Lolame from Pixabay.

The roseate spoonbill is one of six species of spoonbills in the world, but is the only one found in the Americas and the only one with vividly colored plumage (the others are chiefly white). With its bright pink feathers, red eyes, lanky legs, and long neck, the roseate spoonbill is often mistaken for a flamingo by the casual observer – though most locals will recognize this iconic bird in its own right. Roseates can reach almost three feet tall and have a wingspan of over four feet wide. In addition to their recognizable pinkness, their partly bald / greenish head and large spoon-shaped bill are dead giveaways for identification purposes. Juveniles are paler pink and have a completely feathered head until about three years old.

Found throughout the entire Gulf of Mexico coastline, south to Central America, South America, and the West Indies, the roseate spoonbill is present year-round in coastal Texas, but is more common in the summer. They prefer bays, marshes, estuaries, lagoons, mudflats, and mangrove keys along the coast, but will occasionally travel inland through the eastern third of Texas. In winter, most migrate to Central and South America.

Roseates typically forage in shallow waters (often less than five inches deep), both salty and fresh, with muddy bottoms, such as lagoons, marshes, swamps, wetlands, tide pools, and mangroves. Like all other spoonbills, the roseate feeds by tactolocation. The bill is equipped with sensitive touch receptors that detect vibrations given off by prey. While walking, the spoonbill swings its head and slightly open ‘spoon’ in wide arcs through the water and substrate. When something touches the inside of the spoon, the bill snaps shut, and fine, comb-like filters in the cutting area of the bill strain out various small food stuffs. This keen sense of touch and fast reflexes allow the bird to feed in water that’s muddy or clogged with dense vegetation, and at night. Sometimes spoonbills will chase prey they detect by sight, but touch is used more commonly. Their nostrils are located at the top of the bill, allowing them to breathe while most of the bill is under water. Roseate diets are made up of small fish, crustaceans, aquatic insects, mollusks, slugs, and occasionally some plant material, though that may be incidental. Their pink coloration is due to the carotenoid-rich shrimps they eat (these shrimp eat algae that make their own red and yellow pigments, called carotenoids).

When foraging spoonbills see a flock of spoonbills flying overhead, they point their necks and bills straight up into the air in a posture called skygazing. Roseates are very social birds, spending most of their time in the company of other roseates, as well as ibises, herons, and egrets. This includes roosting, flying, and even nesting, though they often forage alone.  They fly with their long necks outstretched and sleep standing, often on one leg, with the head tucked under the shoulder feathers.

Breeding in Texas occurs mainly during spring. In the nesting colonies, which may consist of multiple species, male spoonbills bob their heads up and down while shaking nearby twigs to seduce females. Interested pairs tempt each other in ritual courtship displays, including exchanges of nest material, dancing, and bill clapping. Once paired, males collect sticks for nesting material and bring them to the female, who constructs the bulky nest and lines it with finer materials, such as moss, leaves, grass, and bark. Completed nests are about two feet wide and five inches deep. Texas populations often nest on the ground on offshore islands in mixed colonies with gulls, terns, and herons – though nests can also sometimes be found in shrubs and trees. Parents take turns incubating their clutch of 1-5 brown spotted eggs for 22-24 days, then take turns feeding the chicks by regurgitation. Spoonbill chicks don't have a spoon-shaped bill immediately after hatching. The bill starts to flatten when they are nine days old; by sixteen days it starts to look a bit more spoon-like, and after about a month, it’s nearly full size. Chicks leave the nest between four and six weeks and are fed by their parents for at least eight weeks, at which time they’re capable of strong flight. Roseates don’t mate for life but they are seasonally monogamous. Typically, roseates don’t breed until their third year, though they are sexually mature much earlier. The oldest recorded roseate spoonbill was at least fifteen years, ten months old when it was recaptured and re-released during a scientific study in Florida. However, they usually only live about ten years.

Roseate spoonbills are plentiful in much of their range, but that hasn't always been the case. Like many other bird species with beautiful plumage, roseates were driven to the brink of extinction during the 1800s. Their striking pink feathers were popular on women's hats and fans, and hunters from all over the U.S. competed for their feathers. Ironically, and to the further detriment of their populations, roseate feathers fade rapidly after death, so the hats and fans made from their plumes had only limited lifespans. In addition, roseates had to contend with the draining and pollution of their wetland habitats. By the early 20th century, there were only a few dozen nesting pairs of roseate spoonbills on the continent. Various forward-thinking groups, including the National Audubon Society, set aside preserves for the birds, and when spoonbills received legal protection in the 1940s, their numbers slowly started rebounding. Today, roseate spoonbills have recovered so well that they no longer need a special conservation status. Habitat loss and the broad use of pesticides remain a threat, but with any luck, these quintessential birds will have a rosy future for many centuries to come.

Where I learned about roseate spoonbills, and you can too!

Cornell Lab: All About Birds
www.allaboutbirds.org/guide/Roseate_Spoonbill/overview