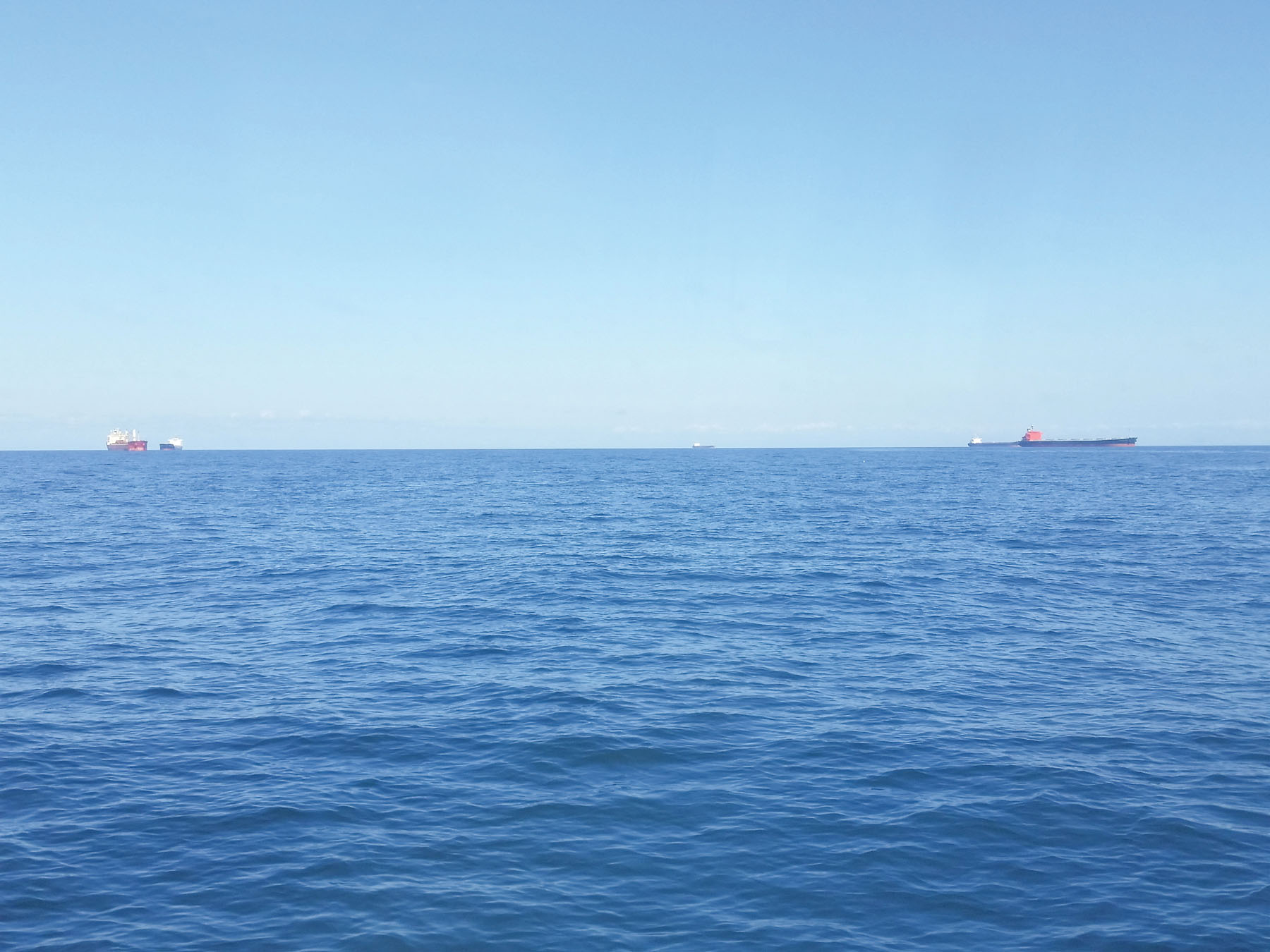 Photo by Norman Boyd.
There's nothing wrong with enjoying looking at the surface of the ocean itself, except that when you finally see what goes on underwater, you realize that you've been missing the whole point of the ocean. Staying on the surface all the time is like going to the circus and staring at the outside of the tent.

Current, when referring to water, simply describes directional motion, especially through a surrounding body of water or air in which there is less movement, such as rainwater flowing down a hill. This motion, similar to how creeks, streams, and rivers flow, is caused by gravity. Oceanic currents are driven by several factors, mainly tides, winds, and thermohaline (temperature & salinity) circulation. Examining all the different types of currents and their causes could fill a year of magazines, so this article will focus just on the currents closest to home, the Gulf Stream and the Gulf Loop. Their backstories are more than enough to fill these pages.

To understand what moves these currents, you'll need a little background information.

When a full basketball is deflated with the needle, the air flows out effortlessly, even though it took work to pump up the ball originally. The air flows out because of the pressure gradient force. In nature, regions of excess move towards regions of deficit, working towards a balance. Air (or water) under high pressure will flow towards areas of low pressure until the pressures equalize. Atmospheric pressure differences are due to density differences in the air. For example, warm air is less dense and creates less pressure than cold air, so wind often moves from cold areas to warm areas. The pressure gradient force is created when air (or water) with different pressures end up next to each other.

If Earth were stationary on its axis, the atmosphere would circulate between high-pressure areas and low-pressure areas (i.e. the poles and the Equator, respectively) in a simple back-and-forth pattern (pressure gradient force). But the earth does rotate, west to east, and it rotates faster at the Equator than it does at the poles (because the earth is wider at the Equator, so a point on the Equator has farther to travel in a day). Imagine a cannon ball fired due northward from a point on the Equator. Although fired in a straight path, the ball would seem to curve to the east because, being fired from the Equator, it was traveling eastward faster than its target point to the north.

So it goes with air in the atmosphere (and water in the oceans) the air that would have circulated in a simple back-and-forth pattern, were the earth not rotating, is diverted. Instead of moving in a straight pattern, the air curves (toward the right in the Northern Hemisphere and toward the left in the Southern Hemisphere). This deflection is called the Coriolis effect, named after the 19th-century French mathematician, Gaspard Gustave de Coriolis, who studied the transfer of energy in rotating systems like waterwheels.

The Ekman spiral is a consequence of the Coriolis effect; it is named after Swedish scientist Vagn Walfrid Ekman (1874-1954), who first theorized it in 1902. When surface molecules of water are pushed by the wind, they, in turn, drag deeper layers of water molecules below them. Each deeper layer moves more slowly than the layer above it, until the movement ceases at a depth of about 330 feet. Each layer of water, in addition to being dragged by the wind-pushed surface layer, is also being deflected by the Coriolis effect (to the right in the Northern Hemisphere and to the left in the Southern Hemisphere). So each layer has these two forces acting upon it. If the surface is being pushed north by the wind, but pulled east by the Coriolis effect, the effective direction of movement of the water just under the surface will be northeast. And each successively deeper layer of water moves more slowly, so that the layer under the water moving northeast will be moving east, and the layer under that will be moving south east, etc., creating a spiral effect. The Ekman spiral is a factor in ocean gyres, large systems of ocean currents circulating around warm, high-pressure areas.

With those bits of information in mind, we'll return to the topic at hand. Surface ocean currents, such as the Gulf Stream, are driven primarily, but not exclusively, by the complex global wind system. As we know, wind only affects water down to a depth of about 330 feet, so other forces take over beyond that. The Gulf Stream begins in the Gulf of Mexico as a geostrophic current called the Gulf Loop. A geostrophic (Earth-turned) current occurs when the pressure gradient force is balanced by the Coriolis effect. In other words, when water moving from a region of high pressure to a region of low pressure is equal and perpendicular to the deflection of the Coriolis effect, the resulting current flows along lines of equal pressure and is known as geostrophic.

The Gulf Stream is a powerful western boundary current, a surface current making up the western side of a subtropical gyre. It flows along the eastern coastline of the United States and Newfoundland, and is part of the North Atlantic Subtropical Gyre, one of the five major ocean gyres. It was first described in 1513 by the Spanish navigator and explorer Juan Ponce De Len as a "current such that, although they had great wind, they could not proceed forward, but backward, and it seems that they were proceeding well; at the end it was known that the current was more powerful than the wind." It was later charted by Benjamin Franklin in his role as deputy postmaster of the British American colonies with help from his cousin, Timothy Folger, a Nantucket whaling captain, and other experienced ship captains. The chart was published in 1770 in England (where it was ignored), and subsequent versions were printed in France (1778) and the United States (1786). It was years before the British finally took note of the chart, but once they did, they were able to shave off two weeks of sailing time between Europe and the United States.

Most of the waters that feed into the Gulf Stream have been driven westward from Northern Africa across the Atlantic by the Northeast Trade Winds. Trade winds, so named because ships have historically exploited them in their journeys between Europe and the Americas, are an artifact of the pressure gradient force and the Coriolis effect. In the Northern Hemisphere, warm air from the equator flows north towards the pole. As the air moves away from the equator, the Coriolis effect deflects it to the east. It cools and descends, circling back to the southwest, back toward the equator. A similar wind pattern occurs in the Southern Hemisphere.

Once the current from Northern Africa reaches the Caribbean Sea, it is funneled through the many channels of the Antilles, the islands of the Caribbean, and the Yucatan Channel before looping into the Gulf of Mexico. It is here that the Gulf Stream first becomes an organized flow on satellite images, which is why the current is said to begin in this area. As it circulates through the Gulf of Mexico, the Gulf Stream gains strength. When it exits through the Straits of Florida, it is a powerful underwater river that transports water at a rate of 30 sverdrups (Sv). The sverdrup, named in honor of the pioneering oceanographer Harald Sverdrup, is a volumetric measurement used almost exclusively in oceanography and is equivalent to 264,000,000 gallons per second. The Amazon River moves at 0.2 Sv; the Mississippi River, in flood, is a mere 0.016 Sv. The movement of the Gulf Stream gradually increases as it moves up the eastern coastline of the United States, from 30 Sv in the Straits of Florida to a maximum of 150 Sv south of Newfoundland.

Clearly, one of the difficulties of studying the Gulf Stream, or any ocean current, is its extremely complex makeup. Not only are there multiple forces causing it or acting upon it in some way, it's also more than a single ribbon of moving water; it's a complicated network of currents that sometimes shift course, or disappear and reappear, or develop eddies, etc. Today, satellites are equipped with temperature and color variation sensors that trace the changing patterns of the current.

The beginning of the Gulf Stream, the part that extends northward as a clockwise flow into the Gulf of Mexico, is called the Gulf Loop Current. Its circulation is similar to a cul-de-sac, transporting warm Caribbean waters northward into the Gulf and then southeast around to Florida's coast. It is the dominant circulation feature in the Gulf of Mexico, transporting up to 27 Sv and reaching flow speeds of 6 feet per second. Present in the Gulf about 95% of the time, the current stretches about 125-190 miles wide and 2600 feet deep. Specifying a length would be pointless because, sometimes, it barely enters the Gulf before heading towards the Atlantic. Other times, it may travel nearly to the coast of Louisiana before swinging back towards the Straits of Florida, hence the name, Loop Current. But this elongated loop is unstable and pinches off in large rings, or eddies, called Loop Current Rings, that drift westward towards Texas and Mexico. The rings are quasi-regular in occurrence, spinning off the main current every six to eleven months.

These unusual current patterns may control the Gulf's fauna, to some extent, because many species depend on currents to transport larvae. The path of the current also potentially isolates animal populations in the deep Gulf from the populations in the larger deep Atlantic. The deep water in the Gulf flows in from the Caribbean, not directly from the Atlantic, and the islands of the eastern Caribbean act as a very leaky wall with many shallow gaps, but only a few deep gaps, limiting the flow of deep water but not putting a big dent in the influx of warm water, a boon to many species, but a fret for those of us on the Gulf Coast.

During summer and fall, the Loop Current provides a deep layer of very warm water that acts as a huge energy source for any lucky hurricanes that might cross over. When a Loop Current Ring is pinched off at the height of hurricane season, it becomes a vast reservoir of energy, available to any hurricane that has already crossed over the warm current. This type of situation fueled both Katrina and Rita in 2005.

This same warmth that fuels hurricanes is carried out of the Gulf by the Gulf Stream and becomes a warming effect on climates all the way to England and Norway. Although there are no definitive conclusions yet, the Gulf Stream could be impacted by global warming. Some studies suggest that the release of cold, dense water flows from melting glaciers might disrupt the Gulf Stream and other major currents, which could subsequently cause a change in weather patterns worldwide (another topic that could fill a year of magazines).

In summary, ocean currents are complex (and perplexing), and this was just a snapshot of what's going on inside the circus tent.

Where I learned about ocean currents, and you can too!