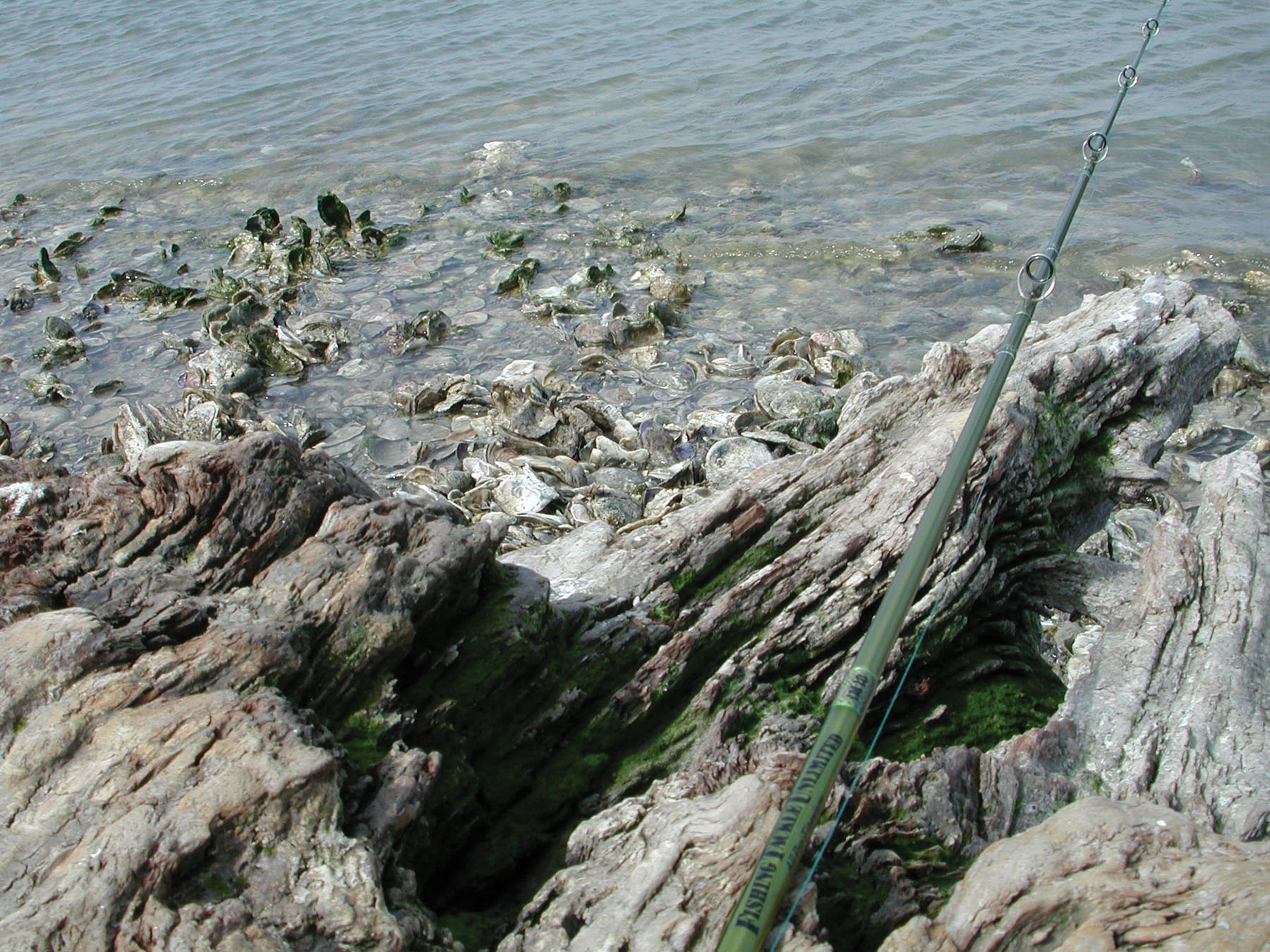 Texas waters primarily host the Eastern oyster, Crassostrea virginica, also called the American oyster, Atlantic oyster, common oyster, and Viriginia oyster. The Eastern oyster is a bivalve mollusk, a type of shellfish with two bilaterally symmetrical shells hinged together at one end and closed by a large muscle, called the adductor muscle, at the other end. Though small, a three-four inch oyster requires a pull of over twenty pounds to open.(1) C. virginica can be found in in Corpus Christi Bay and all bays north, and the south end of the Laguna Madre near Brownsville. They are often found growing in large piles known as beds, or reefs, in both lower and upper bay areas.(2)

A fertilized egg soon develops into a free-swimming, shell-bearing larva called a veliger. During this stage, which lasts two to three weeks, larvae are carried throughout the bay by tidal currents while they search for suitable places to settle. Many will become dinner for something else. Some will be swept into waters too fresh, too salty, or too polluted. Oysters need a hard surface (cultch) to grow on; they can't survive if buried. The often settle on oyster shell, but any hard substrate will do. Bacteria and algae growing on suitable cultch give off chemical cues that may trigger a wandering veliger to settle.(1) When settling, veligers change into small oysters, called spat (presumably because of their resemblance to specks of tobacco juice), about the size of pepper grains. Spat are gregarious and tend to settle at the nearest spat party. Wherever a spat settles is where it stays for the rest of its life. All Eastern oysters spend the first part of their life as males. Eventually, they all turn into females. Why? We're not sure. Perhaps an evolutionary advantage. Perhaps more energy is needed to produce the large eggs than the small sperm. Growth in Texas waters is fairly fast and occurs throughout the year.(2) Oysters can reach sexual maturity in four weeks after settling, and most reach the legal market size of three inches by twenty months.(1)

The oyster builds its shell continuously, secreting new layers successively in all directions. Sometimes a shell fragment, sand grain, or other irritant becomes stuck in the soft tissue. The oyster just continues to secrete around it, creating a pearl. The commercial Eastern oyster, however, lacks the special ingredient to form the mother-of-pearl coating, which gives the desirable pearls their luster. So while their pearls are interesting, they're not valuable, monetarily.(2)

Thankfully, oysters have considerable value beyond their pearls. Oyster reefs create habitat for over three-hundred different species, providing both food and protection. Coral reefs serve a similar purpose; however, unlike a coral reef ecosystem, which can loose several species of coral and still function, an oyster reef ecosystem will deteriorate without a healthy population of oysters.(4) Oysters fill another important role as filter feeders. A single oyster can filter up to six gallons of water an hour, and a large population can influence the clarity of an entire bay. Because oysters, like vegetation, can reflect the recent past environmental conditions of the area they live in, the health of a bay can be ascertained through the study of oysters and other filter-feeding organisms. After oysters settle, they cannot move if the area in which they live undergoes a change in water quality, and so are at the mercy of their changing environment. Since they are filter feeders, their bodies absorb any nutrients, or pollutants, that flow through them. Therefore, if the oysters are healthy and thriving, it is a good assumption that the bay is at least relatively healthy. If, on the other hand, the oysters are declining, it is logical to assume that their environment is changing, either naturally or by human activity.(5)

Besides being significant ecological features of Texas bays, oysters support an important commercial fishery. Unlike most other seafood, oysters are eaten in their entirety, sometimes with no preparation. Though there are several edible mollusks found along the coast, most live singly, scattered along the seabed, making their harvest a tedious process. Oyster harvest is much more appealing because of the oysters' colonial living habits. Special dredges can quickly scoop up a multitude of oysters, from which small oysters and empty shells are culled.(2) Ninety percent of the public reefs dredged by commercial and recreational fishermen are located in Galveston, Matagorda, and San Antonio Bays (but especially Galveston). Prior to Hurricane Ike, eighty percent of commercial oyster landings came from Galveston Bay, and it is still the top producer.(5) All oysters sold in Texas must be harvested, handled, processed, and stored in accordance with state and federal mandates. The old warning "never eat oysters in months without an 'R' in them" dates back prior to the development of efficient refrigeration. Actually, oysters are edible year-round, assuming they don't accumulate any contaminates; though after spawning, they tend to be less meaty. The best oysters are harvested in winter and early spring.(2) Appropriately, the public harvest season, both commercial and recreational, runs from November 1 through April 30, with a recreational daily bag limit of two bushels.(1) The Texas Department of State Health Services (DHDS) may close certain oystering areas during the harvest season, depending on the sanitary conditions of the population. Always check the maps provided by the DHDS for closed or polluted areas and call their 24/7 hotline for current closures (800-685-0361).

In the past, oysters were harvested for industrial purposes as well as food. Oyster shells have been used in cement, poultry feed supplements, plaster, mortar, road building, dry ice production, paper manufacturing, and magnesium refining. To preserve the oyster population, regulations were eventually imposed to limit dredging near living reefs, and portions of the harvested shell were returned to the bays to encourage new reef growth. In addition, an experiment using condensed balls of fly ash from power plant smoke stacks as spat substrate resulted in several new reefs from upper Trinity to lower West Bay that are still viable and producing today (except the ones in Trinity, which never got a good start due to the very low salinity). Oyster transplanting is also used to create new harvestable reefs. Since oysters affected by bacterial contamination can flush their systems and be safe to eat in fourteen days, oysters are sometimes transplanted from waters designated as polluted by the DHDS to leases in approved waters.(4)

Being estuarine in nature, oysters can tolerate fairly broad changes in siltation, temperature, salinity, tidal fluctuations, etc., and they can weather extreme changes in their environment for short periods of time by tightly closing their shells. However, they must eventually open their shells or risk drowning in their own waste, and if conditions have not improved, the oysters will die.(2) They must also contend with predators such as black drum, blue crabs, oyster drills (snails that drill a hole through the oyster's shell to reach its flesh), and birds (at low tide) as well as parasites, such as dermo. The prolific nature of the Eastern oyster is enough to combat these detriments, as long as the population is not overfished or exposed to a wide-ranging permanent, extreme change in the environment.(4)

Fun facts:
* Oysters don't have eyes, but they do have pigmented spots that are light sensitive; no one tells these guys not to fear shadows!
* Oysters are blue-blooded, as they have copper rather than iron to carry oxygen and carbon dioxide.(3)
* Sometimes, the freshly shucked oyster houses a brownish "worm" within the oyster's body. This worm is actually an enzyme complex created by the oyster when it feeds. Some consider it a mark of freshness.(2)
* Oysters are sometimes cited as aphrodisiacs because they're rich in amino acids that trigger increased levels of sex hormones. Also, they have a high zinc content, which increases the production of testosterone.