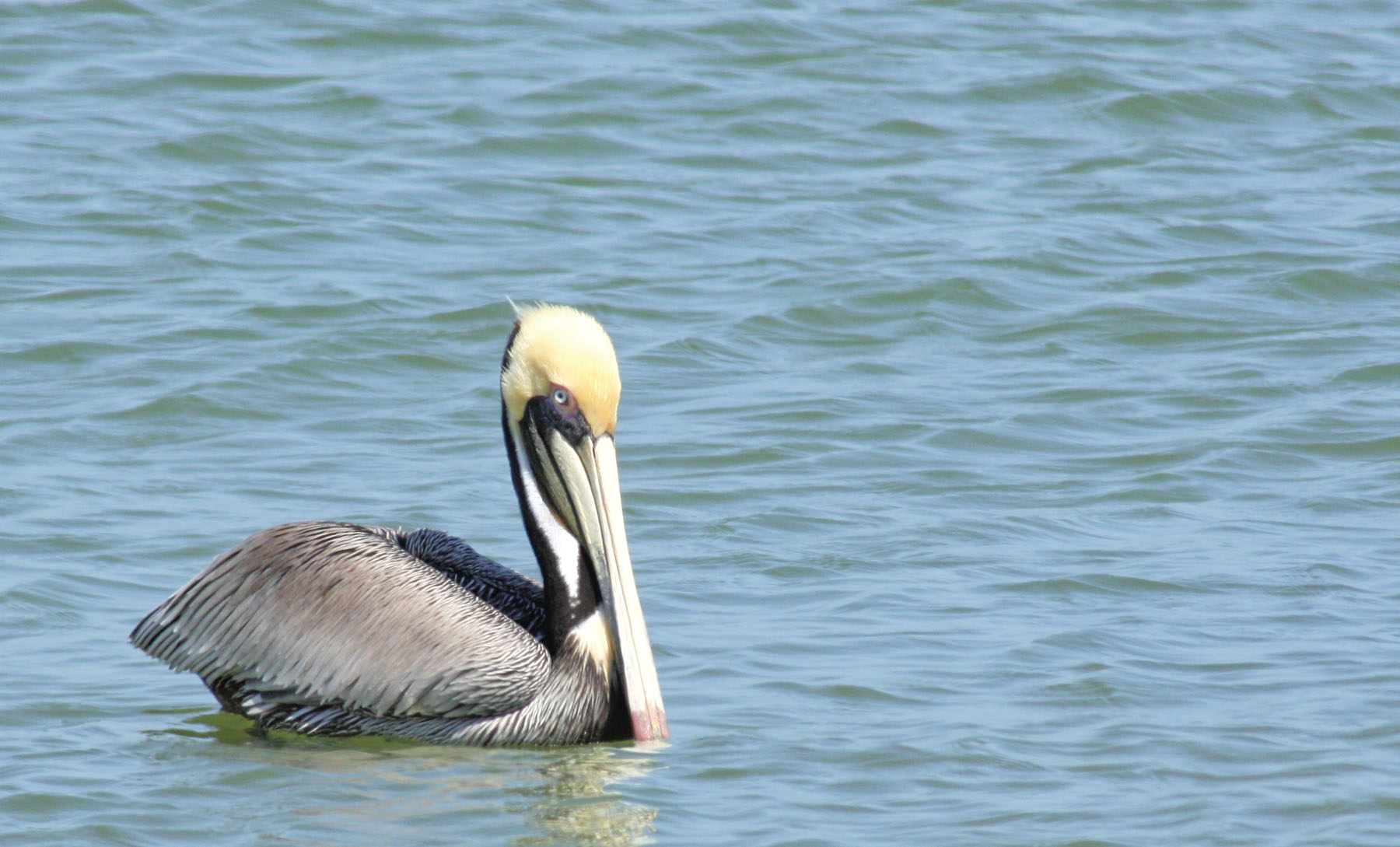 A brown pelican in Texas City. Photo by Kyle McCreary.
A wonderful bird is the pelican,
His bill will hold more than his belican,
He can take in his beak
Enough food for a week
But I'm damned if I see how the helican!
~ Dixon Lanier Merritt


Pelicans are probably the most recognizable of all coastal birds. Their unique bills and behaviors have immortalized them in everything from Shakespearian lore and medieval heraldry to Christian symbolism and Indian legend. Of course, what does immortality mean to a bird that's been around, nearly unchanged, for thirty million years?

In evolution, change is the name of the game. Those organisms that seem to have reached a stagnant point in their development are sometimes seen as occupying a lowly branch on the evolutionary tree. Creatures such as the duck-billed platypus, alligator gar, and lungfish often referred to as "living fossils" by documentary narrators supposedly owe their existence to the inheritance of a "protected station," an ecological niche in which they were the biggest, baddest, and only competitors.

As evidenced by a fossil found in southern France in 2010, pelicans would seem to be another group left behind by evolution. The beaks, bills, and other keratinous structures of birds are rarely preserved, but this particular fossil showed a mostly in-tact bill that was proportionally larger than in modern pelicans. That difference aside, its other characteristics can all be found today somewhere in the existing pelican species.

Why pelican anatomy should have remained unchanged for so long is unclear. Perhaps their main prey have not changed appreciably, or maybe there's only so many ways you can build a functional pelican. In any case, once they adapted to a particular role that has been available over wide areas of the globe for thirty million years, there was no reason to continue changing. In 1858, Darwin proposed that "species inhabiting a very large area, and therefore existing in large numbers, and which have been subjected to the severest competition with many other forms, will have arrived through natural selection at a higher stage of perfection than the inhabitants of a small area." That being the case, it would seem inappropriate to label this group of birds as vestiges of a more diverse group, the other lines "having been beaten out and exterminated by more improved forms" (another Darwinism). I would classify their survival as alike with the crocodilians, a long-lived and successful lineage.

Linnaeus first formally described the genus Pelecanus in 1758. The name is derived from the ancient Greek word pelekys, meaning ax. The distinguishing characteristics Linnaeus applied to this group were a straight bill hooked at the tip, linear nostrils, a bare face, and fully webbed feet. This early definition included just a few additional non-pelican birds

Although they appear clumsy on land, pelicans are strong swimmers and powerful fliers, sometimes traveling nearly 100 miles (one way) to feeding areas. They are mainly piscivorous, but won't turn their bills up at amphibians, turtles, crustaceans, and even occasionally, other birds. Most pelicans fish in cooperative groups by swimming in a "U" shape and driving the fish into shallow waters by beating their wings on the surface. Then they just scoot through and scoop 'em up. A couple of species, our own brown pelican included, actually dive for fish, though they're not averse to snagging the unwary mullet if it swims right under them. Contrary to urban legend, pelicans do not store food in their pouch; it's just used for catching (though they will carry food back to their chicks in it).

Adult pelicans rely primarily on visual communication. There's some occasional grunting when at the colony, but they're generally silent elsewhere. Pelicans are gregarious and nest colonially. Though you might think this would be a quiet suburb since the adults don't verbalize much, the chicks more than make up for their parents' silence. Mated pairs are monogamous for the season. Newly hatched chicks are fed by regurgitation. At about a week old, they can stick their heads into their parent's pouch and feed themselves.

There is an often-recounted myth of the pious pelican who pierces her breast with her bill to feed the blood to her chicks when there is no other food available, her blood even having the power to bring the chicks back to life. This self-sacrifice became a Christian symbol with mentions in hymns and texts, such as Dante's reference to Jesus as "nostro pelicano." This image of the mother pelican wounding herself also became popular in medieval heraldry, though the pelican often looked rather eagle-like in the renderings. Ironically, the earlier Greco-Roman, Indian, and Egyptian myths tell that the mother (or father, in some cases) first kills her chicks when they start to rebel, and then, moved by piety or regret, revives them with her blood. I wonder if those who adopted the family-friendly version knew the more grim, original story. In reality, the pelican will press its bill onto the chest to fully empty its pouch for the chicks, and some species have a red throat during breeding season...

There are eight species of pelicans around the world, living on every continent except Antarctica. We have the eastern brown pelican year-round and the American white pelican in the winter (there are a few small colonies of the American white that stay on the Gulf coast year-round, but the majority go up north for breeding).

This is the smallest of the eight pelicans, weighing up to ten pounds, with a wingspan up to about 7.5 feet. Males are typically larger than females. It is one of only two pelican species without predominantly white plumage. Their pouch can hold up to three gallons of water, which is three times more than the stomach can hold. To feed, brown pelicans soar 30-60 feet in the air, singling out fish near the surface of the water. When they have a target; they dive. To ensure the dive is non-lethal, the bird is equipped with air sacs just beneath the skin, kind of like your car's air bags. The brown pelican also tucks its head and rotates its body to the left just before impact, probably to cushion the trachea and esophagus, which are found on the right side of the neck. They prey primarily on menhaden, mullet, and anchovy, but they're not above pilfering leftovers from fisherman, or even stealing outright from other birds. Gulls will often steal a pelican's catch right out of his pouch, even perching on the pelican's head to wait for an opportunity. Karma.

Brown pelicans were listed as endangered in 1970 and nearly disappeared from Texas altogether. DDT pollution in the 1950s and 1960s contaminated the food web. While it didn't kill pelicans outright, it led to thin eggshells. Pelicans brood by more or less standing on their eggs. A ten-pound bird standing on eggs with thin shells = crushed eggs. Luckily, brown pelicans have a fairly long life span, about thirty years, so when DDT was banned in 1972, the birds still had time to save the species. They recovered enough to be delisted in 2009 and continue to make a steady comeback.

American white pelicans are found throughout North America. They breed in inland, prairie regions of the US and Canada and head south for the winter. There are a few small, year-round populations along the Gulf. This is a large, white species of pelican, up to twenty pounds with a wingspan of up to about 9.5 feet.

The American white will eat three to four pounds of fish per day by gliding over the water surface, scooping up daydreaming fish (and straining the excess water out before swallowing). Though both parents take an active role in rearing their young, these pelicans typically successfully raise just one of the two eggs they lay. They are easily disturbed from nests, readily abandoning their young if threatened (other birds apparently don't bother them, but anything that walks constitutes a threat).

While there are no known adverse effects of American white pelicans on humans, they have been persecuted in the past because of the misperception that they were eating commercially harvested fish (they mostly eat small fish with no commercial value). Starting in the 1880s, American whites were clubbed and shot, their eggs and young deliberately destroyed, and their feeding and nesting habitat lost to industry. Even in the 21st century, there have been attempts to reduce pelican numbers through systematic culling (not in Texas, fortunately).

Though they can be a real nuisance at cleaning tables, pelicans in Texas seem to be in fairly good standing with their human neighbors, on the whole, though they're exploited mercilessly (and effectively) by the tourism industry. It's appropriate. They are, certainly, an icon of the coast.

Where I learned about pelicans, and you can, too!