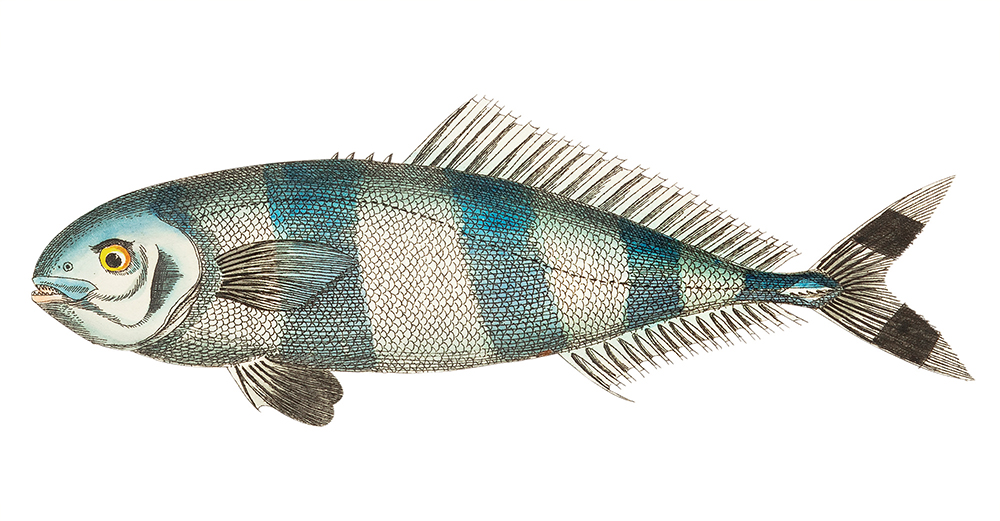 The sleek little pilot-fish, azure and slim,
How alert in attendance be.
From his saw-pit of mouth, from his charnel of maw
They have nothing of harm to dread,
But liquidly glide on his ghastly flank
Or before his Gorgonian head;
Or lurk in the port of serrated teeth
In white triple tiers of glittering gates,
And there find a haven when peril’s abroad,
An asylum in jaws of the Fates!
~Herman Melville, The Maldive Shark

Pilot fish are a widely distributed marine member of the family Carangidae (jacks, pompanos, etc.) found throughout warm and tropical waters around the globe, ranging from very shallow down to almost 1000 feet. They have a long, slender body – even by carangid standards – about four times as long as it is deep, and sport the characteristic forked tail of their family. Though somewhat mackerel-like in appearance, they have a blunter, more rounded nose and smaller mouth, and their long second dorsal fin further separates them from the tribe. The first dorsal fin is only three or four short, inconspicuous spines, connected by a membrane in young fish that recedes as they grow. The second dorsal fin is a bit concave in outline and starts about midway down the back. The anal fin is basically a mirror of the second dorsal fin, but only about half as long, and is preceded by two very short spines. There is a lengthwise keel on either side of the tail base – much like the keel of a ship, it is a lateral ridge that provides stability and support to the tail fin. The gill cover is rounded in adults, but has a spine in young fry. Of course, the pilot fish’s coloration is probably the most striking part of its anatomy. It can be recognized by its five to seven dark bands, which are normally in sharp contrast against the rest of the pale to silvery blue body. They are also known to have temporary color variations when excited or provoked; the dark-colored bars disappear, and the body turns silvery-white, with three broad blue patches on the back. Adults can grow up to about two feet in length, though they’re usually around a foot.

There are a few possible etymologies for the common name, “pilot fish.” Their habit of riding the bow waves of ships led some seafaring peoples to believe that the fish was guiding their ship to safety or to its destination. It was also formerly thought to lead larger fishes to prey, due to their tendency to ride the pressure wave immediately in front of the larger fish’s snout. In Greek mythology, the god Apollo turned the sailor Pompilos into a pilot fish as Pompilos attempted to ferry a nymph fleeing from Apollo across the sea. The genus name, Naucrates, comes from the Greek naus, meaning “ship,” and kratēs, meaning “ruler” (a variation of kratos, meaning strength or power). The species name, ductor, comes from the Latin ducere, meaning “to lead.”

Pilot fish hang around larger fish (also turtles, whales, fish aggregating devices, and ships) for a couple of reasons: 1) to eat leftover scraps from their host’s meals and 2) for protection. They also provide a bit of a cleaning service, eating parasites off the skin of their hosts. The most common hosts are sharks, and while they can be seen with all manner of sharks, the preferred species is the oceanic whitetip. It is extremely rare that a shark will eat a pilot fish, and smaller pilot fish are frequently observed swimming into sharks’ mouths to feed on fragments of food from between their teeth. Their relationship can be classified as semi-obligate commensalism (commensalism being a relationship between two organisms where one benefits and the other is not significantly harmed or helped), though sometimes the cleaning provided by the pilot fish is beneficial enough for the relationship to be considered mutualism (where both organisms benefit significantly). Pilot fish travel in a kind of a posse around their shark and are territorially protective, chasing away smaller rival pilot fish. One account from 1832 claims that pilot fish have “been known to follow a ship for six weeks after the shark to which [they] belonged was taken.”

Spawning extends from early summer to late autumn. Eggs are pelagic, floating about in the upper layers of the open sea. Juveniles are usually associated with jellyfish, drifting seaweed, and fish aggregating devices, where they opportunistically feed on plankton. As they mature, they graduate to larger host animals, eventually making their way up to sharks. How quickly they climb the ladder mostly depends on presence, availability, and the prevailing attitudes of incumbent pilot fish. The maximum age reached in captivity is three years; wild statistics are currently unknown. Early sexual maturity, along with a protracted spawning period might be traits favoring survival in the highly variable pelagic environment they travel through.

Pilot fish are edible and supposedly taste good, but they are difficult to land in spite of their size due to their habit of going quite insane when hooked. They are taken as bycatch in some parts of their range and are of minor commercial value. However, this is not considered a major threat to the global population. They are therefore assessed as Least Concern by the IUCN Red List. They also have some popular culture applications. A company called Sharkcamo sells rash guards and decals for surfboards and bodyboards that have stripes mimicking the pattern of poisonous fish, cleaner fish, pilot fish, and remoras — those species that sharks do not choose as prey. In the BBC science fiction series Doctor Who, pilot fish were used in analogical terms for a robotic species who congregated around more dangerous lifeforms.

While pilot fish populations aren’t in danger, their preferred host, the oceanic whitetip, is in crisis. At one time, oceanic whitetips were thought to have been among the most numerous pelagic sharks on the planet. The Natural History of Sharks, written in 1969, even characterized them as “possibly the most abundant large animal (large being over 100 pounds) on the face of the Earth.” They’ve now all but disappeared because of complications with commercial fishing and the shark fin trade — with surprisingly little attention from either the scientific community or the public. On land, the effect of removing dominant predators is well understood, such as the explosion of prey species and the parasites that plague them (which incidentally sometimes end up plaguing humans). It’s unknown what effect the oceanic whitetips’ steep decline has had on ocean ecosystems because we understand so very little about them. Who knows what will happen to the pilot fish when the leader of their posse meets its demise…

Where I learned about pilot fish, and you can too!