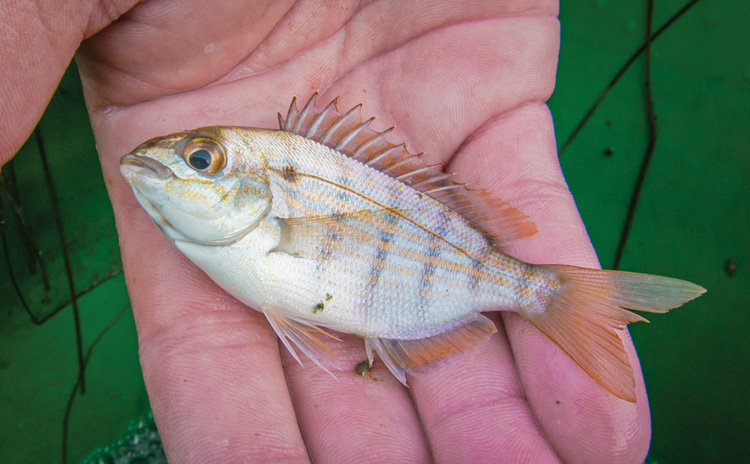 Spines are a common defense in the ocean, but few spines are as well-known to anglers on the Texas coast as those of the pinfish. As a child, I loved catching just about anything off the bulkhead at my dad’s office, but there was a particular pride to removing these prickly creatures from my hook. Their spines were a fun challenge, unlike the dreaded hardhead barbs. And I was almost guaranteed to catch one any day I plopped the lure in the water. In fact, it was often the only catch of the day!

The pinfish is a porgy, like the sheepshead. Members of this family are generally demersal and endowed with grinding molar-like teeth. The pinfish itself is equipped with large incisors, a trait recognized by its genus, Lagodon, which is Greek for “hare teeth.” Adults can reach a maximum length of 15.7 inches and weigh 3.3 pounds, though they rarely exceed 12.2 inches in the wild and more commonly grow to around 5 inches. The body is compressed and oval, though its species name, rhomboides (also Greek), indicates a rhomboid shape. Distinguishing characteristics include its olive back, bluish-silver sides with thin yellow and blue stripes running longitudinally and 5 or 6 dark, diffuse, vertical bars on the sides. Fins are light yellow with broad, light blue margins. There is a distinctive black spot on the shoulder, behind the gill plate. The mouth is comparatively small. Both upper and lower jaws have 8 broad, deeply notched incisors and 2.5 rows of molars. A single small, forward-projecting spine precedes the 12 rigid dorsal spines, giving the species its common name, pinfish.

Though the genus Lagodon is monotypic (meaning it contains only a single species), pinfish can still be confused with other co-occurring species. The longitudinal yellow lines resemble some of the various species of grunts, though the head, mouth, and teeth look different enough to avoid most confusion. As juveniles, pinfish are sometimes mistaken for sheepshead, but the dark vertical bars of sheepshead are more prominent and persistent.

The pinfish is one of the most abundant fishes in shallow water throughout most of its range – from New England south through the Gulf of Mexico, and the north coast of Cuba to the Yucatan peninsula. It is the numerically dominant fish in subtidal seagrass habitats of the Gulf of Mexico and the southeast Atlantic coast. Although pinfish occur over many bottom types, there is a preference for vegetated bottom, probably due to the culinary importance of these areas. When vegetated areas are not available or are too crowded, pinfish will also live around rocks, jetties, pilings, docks, breakwaters, mangrove roots, etc. They occupy a wide depth range, up to 302 feet, though adults seem to prefer between 30 and 50 feet deep, on average. Juveniles are more common where there is cover from predators and rarely venture into the open, except at night.

Pinfish are considered euryhaline (able to tolerate a wide range of salinity). They spend most of their time in the estuaries, but they spawn in offshore waters and also frequently venture into low-salinity environments, even freshwater. Distribution of pinfish is determined by season (temperature), salinity, bottom type, water clarity, and growth stage. Season seems to be the most commonly mentioned factor. Pinfish tolerate temperature fluctuations typical of shallow subtropical estuaries, roughly between 50°F and 95°F. Extremely high and low temperatures cause them to migrate from shallow areas to deeper areas. Some individuals may bury themselves in the bottom to avoid extreme cold.

Young pinfish are voracious feeders who eat fish eggs, insect larvae, polychaetes, and small crustaceans, such as shrimp, mysids, and amphipods. Adults eat all that plus plant material. As they mature, the species exhibits a dietary shift, from carnivore to omnivore. This shift accompanies a physical change in the shape of the incisors to a flat-topped morphology, as well as a change in foraging technique, from sucking and ram feeding (a method of feeding in which the predator moves forward with its mouth open, engulfing prey along with the water surrounding it) to biting.

Pinfish are so abundant that their feeding habits are an important limiting factor to amphipod populations, keeping them in balance within the seagrass community. In some areas, pinfish become so seasonally numerous that their foraging activities can affect the aggregate composition of benthic organisms that live in seagrass communities. They are equally important as a prey resource for several larger species, including gars, ladyfish, seatrouts, redfish, flounders, dolphins, etc. They are a major trophic link between seagrasses and piscivores. It would seem that their sharp dorsal spines only offer so much protection…

Adults and juveniles migrate out of the shallow waters in the fall to their spawning grounds in the deeper waters of the Gulf, the juveniles maturing during the migration. Females likely spawn several times within the season, and larger fish are believed to spawn earlier than smaller fish. Eggs that are about 1 millimeter in diameter are broadcast in the water by the females, then fertilized by the males. Fertile eggs are semibuoyant; non-viable eggs sink. Anywhere from 7,000 to 90,000 hatch after 48 hours, producing 2.3-millimeter larvae that feed primarily on calanoid copepods (a kind of zooplankton). At 12 millimeters in length, larvae become juveniles and migrate into the estuaries. Pinfish reach sexual maturity at 3 to 4 inches, about 1 to 2 years of age. Age estimates obtained from otoliths (ear bones) of wild pinfish indicate that they can reach 7 years old, but because they are prey for so many other species, the vast majority of individuals do not live nearly that long. In 1962, it was reported that no more than two percent of age 0 pinfish in Laguna Madre, TX, survived from hatching to reach age 1.

Pinfish are quality food fish, though their small size limits their commercial importance. They are sometimes killed in great numbers during fishing operations directed at other species and are often a nuisance because of their sharp spines and tendency to become tangled in nets. They are a popular live bait used by both inshore and offshore recreational anglers, and some commercial baitfish fisheries do center on the species for that aspect. They are also said to produce a high-grade oil, though there appears to be little or no current use of the species for this purpose. They have been used extensively as test organisms, primarily in pesticide toxicity assays. In 1967, it was reported that petrochemical wastes caused up to 10 percent mortality of pinfish in polluted waters near Corpus Christi, TX.

Although sometimes scorned as bait stealers, pinfish provide considerable sport to recreational anglers. Recreational landings in the Atlantic and Gulf coasts of the United States showed a general increasing trend from 1981-2012, according to NOAA. The bright coloring and abundance of the pinfish make it a familiar sight in the coastal waters of Texas, and a favorite among young anglers because they are fun and easy to catch, over and over and over…

Where I learned about pinfish, and you can too!