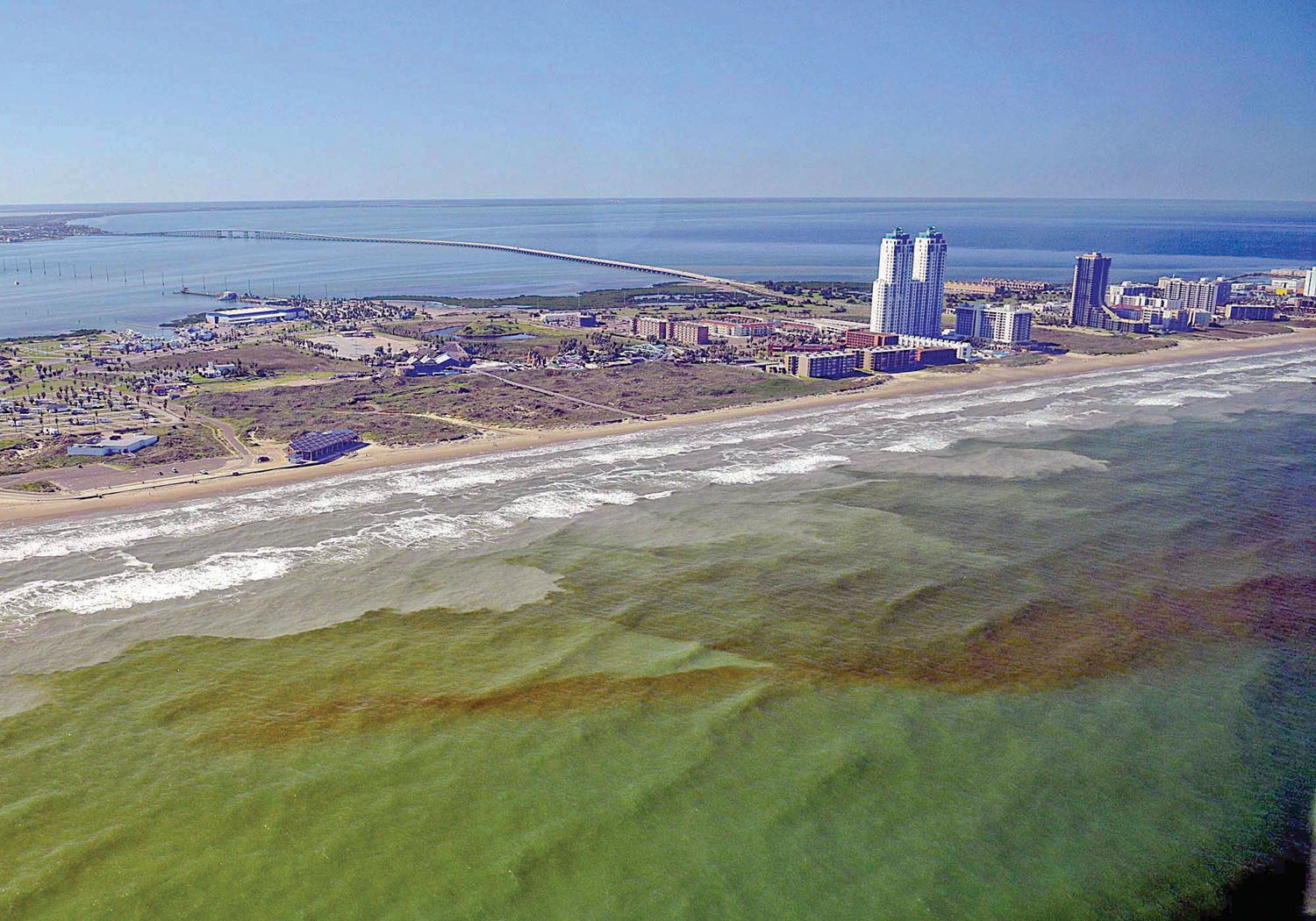 One of our local plankton, Karenia brevis, off the shore of South Padre Island. K. brevis is most wellknown as the culprit of red tides. Photo credit: TPWD

Ever look in a tide pool and think it's just dead water? Take a closer look. It's probably teeming with millions of tiny plants and animals. Some of them you might see floating around if you scoop the water up in a jar. Others, you might need a microscope to see. Many of these tiny creatures are referred to as plankton. The name plankton is derived from the Greek planktos, meaning "wanderer" or "drifter." Plankton are defined by their ecological niche rather than any biological grouping. Any organism, freshwater or marine, that is nonmotile or too small or weak to swim actively against ocean currents is classified as plankton, a collective array that includes certain algae, bacteria, protozoans, crustaceans, mollusks, and coelenterates, and representatives from almost every other phylum of animals.

Planktonic organisms are part of the pelagic (water dwelling) division, distinguished from the benthic (bottom dwelling) division. They are the opposite of nektonic organisms, critters that are capable of swimming against a current, such as sharks, rays, seals, whales, etc. However, there is no defined speed at which an organism must swim to not be considered plankton, so a large gray area exists between planktonic and nektonic organisms. It doesn't really matter though since these are just descriptive terms for life in the water. Interestingly, some plankton can move several hundreds of feet vertically in a single day (or night), but it is their horizontal position, determined by the movement of the water, that classifies them as plankton.

Plankton are generally sub-categorized by one of three characteristics: size, life cycle mode, or method of obtaining nutrients. The size variance is wide, from thousandths of an inch to several feet in length (though most are less than an inch), and like the boundary between planktonic and nektonic, there are no sharp lines drawn between the size categories. But in general 1) megaplankton: mainly the large jellyfish and their relatives, the Portuguese man-o-war and the by-the-wind sailor; 2) macroplankton: 1 mm or more in length, can be collected with a coarse net, and morphological details of individual organisms are easily discernible, includes many copepods, amphipods, cumaceans, and arrow worms; 3) meroplankton: 0.2 to 20 mm in length; 4) micoplankton: also called net plankton because they can be collected by the finest cloth used for plankton nets, 0.05 to 1 mm in length, includes primarily eggs and larvae of invertebrates; 5) nanoplankton: also called dwarf plankton, less than 0.05 mm, includes unicellular animals that pass through nets; 6) picoplankton: 0.2 - 2 m (micrometers - one thousandth of a millimeter, 0.001 mm, or about 0.000039 inch – the width of a single human hair ranges from approximately 10 to 200 m); and 7) femtoplankton: less than 0.2 m. As previously mentioned, these are not hard and fast lines of division. Some of these terms may have different boundaries in different situations or with different people, especially on the larger end. The existence and importance of nano and even smaller plankton was only discovered during the 1980s, but they are thought to make up the largest proportion of all plankton in number and diversity.

Like the size category, the consumption category is only semi-clear. The plant-like community of plankton (photosynthesizing for nutrients) is called phytoplankton, and the animal-like community (eating, at various trophic levels, for nutrients) is called zooplankton. Though convenient, this division is not without fault, for, strictly speaking, many planktonic organisms are neither clearly plant nor animal but are more aptly described as protists.

Phytoplankton comes from the Greek phyton, or plant. All phytoplankton use photosynthesis for energy, but some get additional energy by consuming other organisms. An adequate supply of nutrients, including carbon dioxide, in the sea enable phytoplankton and benthic algae to transform light energy from the sun into energy-rich chemical components. Benthic algae are responsible for about 2 percent of this primary production. Phytoplankton contribute the other 98 percent. It is often mistakenly believed that tropical rain forests make most of the oxygen that we need to survive. But in fact, it is these microscopic phytoplankton, found near the surface of the ocean around the world, that are responsible for producing 80 percent of the oxygen on Earth. All other creatures in the ocean depend on phytoplankton directly or indirectly for food or oxygen.

The most common phytoplankton are diatoms and dinoflagellates. Diatoms are single-celled yellow algae whose cell walls contain silica, a glass-like substance. One half of the cell wall fits over the second half, like a lid. The name diatom actually means "cut in two" in Greek. There are many different kinds of diatoms, and they come in a variety of shapes, such as disks, needles, or linked together in chains. Diatoms are holoplanktonic. When they die, they sink, the cell decomposes, and the cell wall breaks up and mixes with sand and mud. This combination makes a siliceous ooze called diatomaceous earth. Dinoflagellates are single-celled organisms with two tails, or flagella. They come in all kinds of shapes and sizes. Some supplement their photosynthesized energy by wrapping themselves around food and absorbing it. They are seasonally abundant and are one of the primary causes of red tides, seawater bioluminescence, and shellfish poisoning.

All algae are plankton. In fact, algae make up about 90 percent of plankton. Blue-green algae, or cyanobacteria, are also phytoplankton, although they are very unique. They photosynthesize, but some are also nitrogen fixers. They change free nitrogen into nitrates, which are used by both cyanobacteria and other plants in the ocean.

Zooplankton are the second step in phyoplankton-based food pyramids. Zooplankton comes from the Greek zoon, or animal. Many zooplankton are herbivores on phytoplankton. Some small crustaceans, such as copepods and krill, are almost totally dependent on diatoms for food, so their population levels rise and fall with the diatom blooms. Crustaceans, particularly copepods, are the most important members of the zooplankton. They are the marine counterparts of insects, and the largest source of protein in the ocean.

There is a noticeable tendency for zooplankton to make daily vertical shifts. This migratory behavior fluctuates with stages in the life cycle, seasons of the year, latitude, meteorological conditions, and other variables. Generally, the plankton ascend toward the surface at sunset. When there is no moonlight or pier light left, some plankton descend back to the depths, only to approach the surface once again just before dawn. As the sun rises, all descend to their lower daytime level.

In addition to the broad producer and consumer groups in the plankton community, there are a couple recycler groups. Bacteria and fungi found in water belong, by definition, to plankton, but because of special techniques required for sampling and identification, they usually are considered separately. Bacterioplankton, consisting of bacteria and archaea, absorb nutrients dissolved in the water and remineralize organic material down the water column. Prokaryotic phytoplankton also double as bacterioplankton. Mycoplankton include fungi and fungi-like organisms and perform similar functions as the bacterioplankton.

Plankton are fascinating in their diversity of body designs, many made possible by the weightlessness of life in the ocean environment. Foraminifera are single-celled, shell-covered plankton, usually between a millimeter and a centimeter in diameter. Depending on the species, the shell may be made of sand, calcite, or organic matter, and as they grow, they add chambers to their shells. When foraminifera die, their shells sink to the ocean floor and break down. It is estimated that 30 percent of the ocean floor is made of the shells of foraminifera. Radiolarians are another tiny, shell-covered plankton. They make their shells with silica from the ocean. Sometimes, they have long spines that radiate from holes in their shells, which help distribute weight over a large surface and slow the organism's sinking. When radiolarians die, their shells also sink to the ocean floor. If enough shells sink together, the skeletal remains become sedimentary rock.

Plankton are the foundation of the oceanic food web and a unique ecological component of aquatic ecosystems. Water is the medium of aquatic ecosystems, just like air is the medium of terrestrial ones. Finding the medium of an ecosystem saturated with life forms is not something we find on land (except during mosquito season). In the ocean, areas with plankton are like a nutritious soup, and many filter feeders simply scoop it up. This filter feeding mode isn't really found in terrestrial communities. Being the productive base of aquatic ecosystems, plankton are directly connected to the success of many fisheries. Fish rely on the density and distribution of zooplankton to match that of new larvae, which can otherwise starve. Plankton has only begun to be developed and utilized. Large-scale cultures of Chlorella, a green algae, have been found to be technically feasible, but the low degree of digestibility prevents practical use. However, other phytoplankton could be used in space travel as a source carbon dioxide absorption and oxygen production.

In the oceans, phytoplankton biomass appears to be sensitive to changes in sea surface temperatures, climate change, and ocean acidification. A study that examined records kept between 1899 and 2010 discovered that phytoplankton biomass declined by 1 percent per year in all but two of Earth's 10 ocean basins, a cumulative loss of about 40 percent of all phytoplankton. This decrease was attributed to increases in sea surface temperatures occurring over the same period. Several other studies examining single species or specific regions of the oceans also report slow long-term declines in plankton. This is in contrast to rising levels of dissolved carbon dioxide. According to an article in 2007 by the Leibniz Institute of Marine Sciences, plankton actually increase their numbers in response to increasing levels of dissolved carbon dioxide. However, this is creating another dilemma entirely. Phytoplankton are responsible for about 30 percent of Earth's natural carbon dioxide processing; they absorb the carbon dioxide and release carbonic acid. As rising levels of carbon dioxide are absorbed by the phytoplankton, the oceans are becoming acidic. According to Professor Jean-Pierre Gattuso of the National Center for Scientific Research in France, the Arctic Ocean is becoming so acidic it will dissolve shells of sea creatures within 10 years. And a few years after that, the "No Swimming" signs will start appearing.

Where I learned about plankton, and you can too!