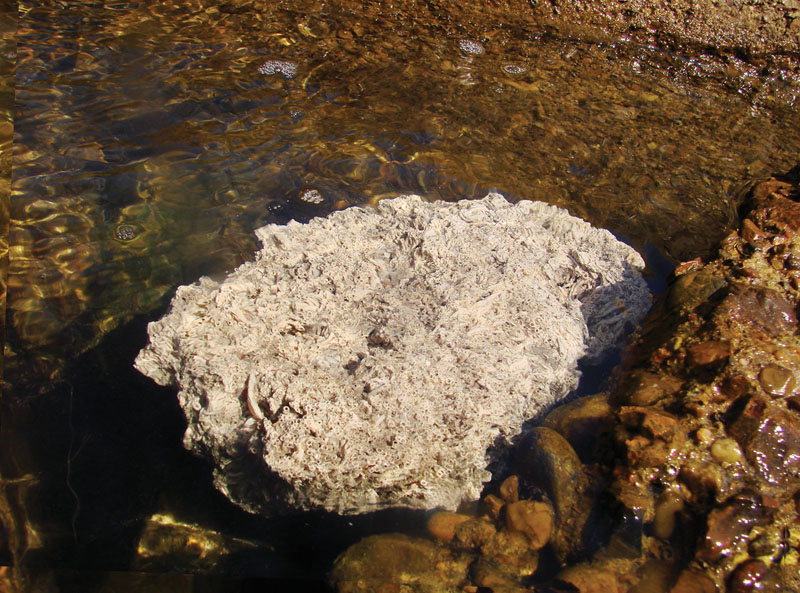 A serpulid reef section from Baffin Bay. Photo by TPWD.

Even if you've been fishing all day and haven't gotten anything except water in your waders and sunburn, you're still better off than the worm.

Polychaetes are segmented worms that can be found living in all environments in the world's oceans, from abyssal depths to the mud and sand of shallow estuaries to rocky shores and even free swimming in open water. They are all aquatic, most are marine, and they are the most abundant and diverse class in Phylum Annelida, a phylum of segmented worms also including earthworms and leeches. This phylum's name comes from the Latin annellus, meaning "little ring." There are over 13,000 described species of annelids, and of those, more than 12,000 are polychaetes.

Polychaete worms are known by many common names lugworms, clam worms, bristleworms, fire worms, palolo worms, sea mice, featherduster worms, etc. but all possess bristles and/or hooks on their many parapodia (leg-like, fleshy, lobed appendages). The word polychaete comes from the Greek polychaits, meaning "much hair" and often translated as "many bristles." The many common names reflect the wide array of body forms represented in this class, unlike earthworms and leeches which mostly have the same basic appearance (and far fewer bristles). Worm is a common name which applies to a body shape rather than a particular phylum or class of animals. Many polychaetes have delicate, colorful forms that make them a favorite for photographers; a few are even named after mythological Greek nymphs and goddesses.

The size range of adult polychaetes seems to be up for debate. However, many sources agree that the majority of polychaetes range from less than half an inch to only several inches in length and about pencil-thick. There is at least one species that reaches ten feet long; the longest ones supposedly reach up to 200 feet, though they are thread-like in thickness. For most polychaetes, each body segment has a pair of parapodia ending in a set of stiff bristles, which may be used for walking, swimming, digging, or defense, depending on the lifestyle of the species. The parapodia also show a vast diversity of form and function, serving purposes such as locomotion, protection, attachment, controlling water flow (in a tube), or can be reduced or lost altogether. Polychaetes are informally divided into two groups: errant, those that are free-moving and active feeders; and sedentary, those with a passive lifestyle. In errant, free-swimming worms, the bristles and parapodia, combined with snake-like body waves and well-developed muscles, help the worm to swim. Sedentary worms often live in homemade tubes or burrows, and many have hook-like bristles to help anchor the worm in place. Burrowers often have a muscular proboscis to aid in digging, but permanent tube-dwellers have softer, less muscular bodies, relying on their tubes for both protection and external support. Tubes can be soft, parchment-like forms constructed from sand and mucus and decorated with pieces of broken shell or hard calcareous tubes, which form reef structures when many worms are together.

Because of the large diversity of lifestyles, polychaete circulatory and respiratory systems also vary widely. Many have gills, but others "breathe" across the entire surface of their body. Some species increase their surface area for breathing with feathery protrusions. Most have oxygen-carrying pigments in their circulatory fluid, usually a form of hemoglobin (we have that too; it's what makes our blood red). Each body segment has a pair of nerve ganglia, and all the segments' ganglia are connected by a pair of longitudinal nerve cords that lead to the "brain" located in head.

Polychaetes have several sensory organs: eyes, tentacles, antennae, touch receptors, photoreceptors (light-sensing), chemoreceptors ("taste"-sensing), and statocysts (balance-sensing). One species has eyes at both ends of its body, which comes in handy since it usually swims backwards. Sessile polychaetes often lack complicated sense organs on their heads. Instead, they spent the millennia evolving large spirals of feather-like tentacles, often brightly colored, that they use to strain the water for food particles. Carnivorous worms often have a set of (comparatively) large pharyngeal jaws, a second set of jaws contained within the throat, or pharynx, distinct from the primary jaws. Moray eels have pharyngeal jaws; so did Alien.

The earliest polychaete fossils appear in the mid-Cambrian (some 500 million years ago). Cambrian polychaetes had no jaws, but some later worms developed hard jaws that mineralized with iron oxide, resulting in numerous well-preserved fossils. In Sweden, these fossil types have resulted in the identification of more than 20 species from the Silurian period (about 430 million years ago), showing the early diversification of polychaetes. Other fossil types include tracks and burrows. Whole body fossils are rare (soft flesh just doesn't preserve well, no matter how much anti-aging cream you use) and are generally found only in Lagersttten (geologic fossil deposits with unusually good preservation, usually representing a wide variety of life from a particular era). Mazon Creek, near downtown Chicago, is one such site where polychaete fossils have been found from the Late Carboniferous period (about 300 million years ago).

The remarkable longevity of polychaetes is due, like other successful groups, to their ability to adapt and evolve to many types of habitats (in the world's oceans). Passing on successful genes is a task polychaetes have also diversified. Most worms reproduce sexually, but asexual reproduction is also known to occur. For sexual reproduction, depending on the species, there can either be separate sexes, or individuals can be hermaphroditic (having both male and female reproductive systems). There are no permanent testes or ovaries. Sperm and eggs develop from the lining of the body cavity, during the appropriate season, and are released into the surrounding water by rupture of the body wall. Fertilization and larval development take place in the open water, except when they don't. The parents of some species brood their young in a tube or burrow. Asexual reproduction generally occurs through budding, in which a portion of the adult's body breaks away to form a new, genetically identical individual. Species capable of asexual reproduction are usually also capable of sexual reproduction.

Some sessile species lose a little part of themselves every time they breed. For much of the year, these worms look like any other burrow-dwelling polychaete, but as the breeding season approaches, specialized segments begin to grow from the rear end (nearest the top of the burrow). The bottom half, the atoke, is asexual and remains behind. The new top half, the epitoke, is packed with eggs and sperm and features a single eyespot. At the beginning of the last lunar quarter, millions of epitokes break free from their atokes and swarm to the surface. Eye spots sense when the epitokes reach the surface, and the segments burst, releasing their eggs and sperm into the open water. In the South Pacific, the palolo worm is harvested for human food during this breeding swarm.

Humans aren't the only animals that feed on polychaetes. Because of their vast abundance, polychaetes are a fundamental component in many ocean food chains. They are part of the diets of shrimps, crabs, a variety of fishes, and even some shore birds. This makes polychaetes an important organism for assessing the health of marine ecosystems. What makes them a useful organism for these assessments is that they are readily available, easy to sample, and respond quickly to changes in environmental conditions (expressed through changes in their reproduction, growth, and mortality).

The ecological importance of polychaetes extends beyond their availability as an easy research subject. Baffin Bay is the home of approximately six square miles of relict polychaete worm reefs. These reefs are composed of the hard calcareous external tubes of serpulid polychaetes (from the family Serpulidae). These remnant structures indicate a past, less-saline environment, and though some living serpulid worms are found on the reefs today, they no longer build new tubes in the hyper saline waters. These reef rock areas provide a relief from the soft substrate typically dominant in this region. The reefs have long been favorite fishing grounds and may play a role in the high historical catch rates for the Baffin Bay system. Unfortunately, many of these reef sites are diminishing in size and distribution, likely from a combination of natural wave energy, prop damage from increased boat traffic, and trampling from anglers. The serpulid worm reefs are a fragile, currently non-renewable component of the Baffin Bay / Upper Laguna Madre system and deserve a certain mindfulness to their existence when being enjoyed for a good day of fishing.

Stay tuned next month for more particulars on our local worms!