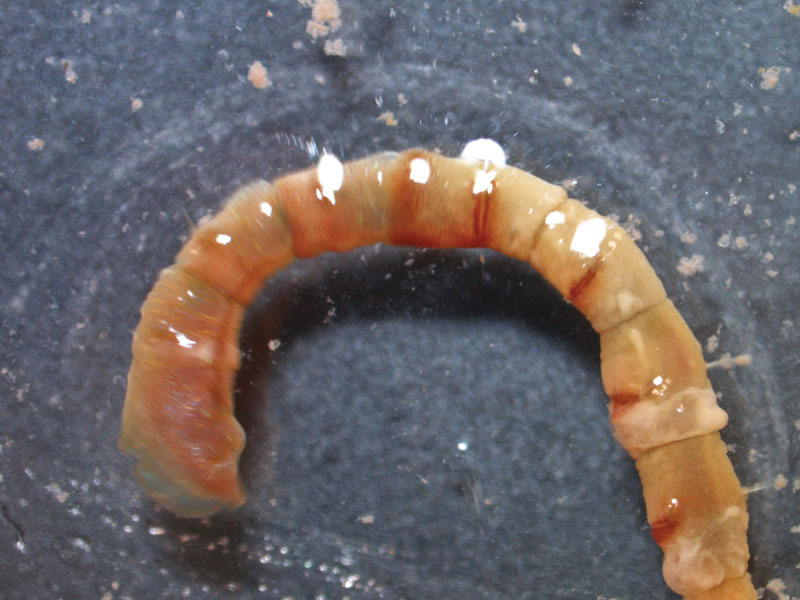 (Continued from the November issue...)

The serpulid reefs of Baffin are not the only polychaete residents we have on the Texas Coast; there are far too many species to cover (hundreds, at least). Most are easily overlooked by someone casually exploring the seashore, even though their densities in mud and sand habitats often exceed those of their mollusk and crustacean counterparts. A characteristic species of the Upper Laguna Madre is Clymenella torquata, one of the bamboo worms. Bamboo worms are named for the resemblance of their segmentally striped body to a jointed bamboo stalk. These are tube-dwelling worms, usually orange or green. They reside head down in the tube, using their bottom to plug the top of the tube. This position enables them to eat their way down through the sediment. Any bacteria or nutrients in the sediment are extracted in the gut, and the waste is excreted through the top of the tube, where it is swept away by the currents. Bamboo worms also irrigate their tubes every 15 or 20 minutes, which allows them to survive in oxygen-depleted waters. Unlike many other tube-dwelling polychaetes, C. torquata is so tightly packed into its tube that it is unable to turn around. Because its tail is exposed to predators every time it needs to relieve itself, it has cultivated an uncommon hastiness in this activity. However, it can regenerate lost segments, if the fish gets the better of it.

Polychaetes are the numerically dominant macroscopic (visible to the naked eye) animals throughout most of the soft bottoms in the Gulf. Their dominance is challenged intermittently by brief blooms of amphipods, anemone, and some clam species. They are a major food resource of commercial shrimp and are also a large portion of the diets of such fishes as porgies, batfish, flounders, and tonguefish. One species common in the fine sand characterizing most of the nearshore sediments in the northwestern Gulf is Owenia fusiformis, the roofing worm. Though it can be found in coarse sediments, this greenish/yellowish worm prefers to build its tube in areas of fairly clean sand. It arranges flat, light-colored sand grains like overlapping roof tiles, with the free edges facing upwards. In mature worms, this tube is 6-8 inches long and 2-5 mm wide. Like the bamboo worm, this species can live in low oxygen concentrations for a short time. O. fusiformis lives with its tube partly extended from the sediment so that its feeding crown, a circle of short, fringed tentacles, can intercept suspended food particles. However, it will also bend over to pick up larger food particles from the sea floor near its tube. This species is often preyed on by flatfish, haddock, and cod, among others.

The most abundant annelid species in the marsh and mud bottoms in West Galveston Bay, according to a study from Dec 1988-July 1989, is Streblospio benedicti. This is a small polychaete that grows less than 2 inches in length (often only about 0.25 inches) and typically lives 30 to 75 weeks. Individuals are generally reddish-brown and slightly translucent, with dark green-brown gill bands. Like the bamboo worm, S. benedicti ingests sediment and extracts the nutrients, but like O. fusiformis, it can extend its feeding tentacles up into the water column to capture floating food particles. This opportunistic behavior contributes to its success as a pioneering species. S. benedicti is consumed by a variety of predators, including grass shrimp, blue crabs, and juvenile fish, such as spot and flounder. Its high density, up to 555 individuals per square foot, makes it a very appealing food source, like a dollar menu (so much food, so little effort). A 1998 taxonomic revision, based on genetic and morphological data, now recognizes Gulf of Mexico populations of S. benedicti as belonging to a separate, closely related species, Streblospio gynobranchiata.

That's just a sampling of the hundreds (maybe thousands) of species of polychaete worms found in the Gulf. Most of us never notice them, despite their prevalence. I only knew of their existence from the tubes that wash up on the beach little straws of sand covered in colorful shell bits. Luckily (for the worm), finding those tubes doesn't mean the worm has died. The top halves of the tube, sticking up above the sediment, are often snapped off by wave action; the worms just rebuild (sand and mud are easy pickings, after all, and they always have some mucous to spare).


Where I learned about polychaetes, and you can too!

The Laguna Madre of Texas and Tamaulipas
By John Wesley Tunnell and Frank W. Judd