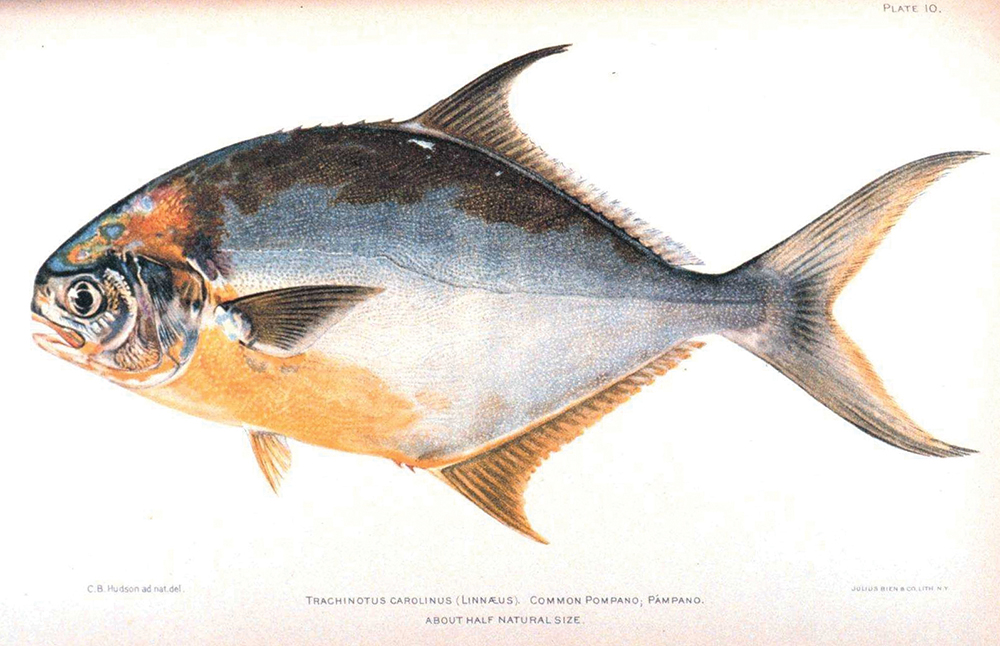 Despite its name, the range of the Florida pompano extends from Massachusetts to Brazil, especially in turbid waters. They are generally absent from clear waters of Bahamas (and similar regions) and from insular areas with coralline habitats. Though as larvae they often live offshore, adults are common along Gulf beaches and passes. In September and October, they move into the bays and estuaries, flashing their silver sides and yellow bodies when they jump in the wake of boats. Though pompano prefer mid to higher salinities (around 32 to 36 ppt), research has shown that, if acclimated properly, juvenile and adult pompano adjust well to lower salinities. Temperature is the real mover and shaker of this species. Pompano are cold intolerant, preferring waters between 62° and 90°F. Mortality occurs at 50 to 53°F, or when there are extreme, abrupt temperature changes, so they often move offshore during the coldest winter months. They can be found in depths up to 230 feet.

Pompano are primarily bottom feeders that opportunistically graze preferred species. Pharyngeal plates indicate that hard-shelled organisms, such as crabs and mollusks, are important in the diet. Also on the menu are beach fleas, shrimp, small fish, and other miscellaneous invertebrates buried in the sand. Young pompano are more opportunistic; as they age, they become more selective in their prey choices. Pompano generally form small to large schools, and juveniles, in particular, form immense schools along beaches. While the schools offer a lower risk of predation, they may also be beneficial for foraging. A collaborative study between the Department of Marine Sciences (University of South Alabama) and the Dauphin Island Sea Lab (Alabama) published in 2015 found that T. carolinus feeding in groups tend to consume more, have fewer unsuccessful foraging attempts, and start eating sooner than individual foragers. Many foraging strategies of schooling fish focus on the location of prey, which is especially important when the prey is moving and only intermittently available, like the ‘swash-riding’ coquina clams. In this unique behavior, coquina clams emerge from the sediment and ride the beach waves in with the tides. During this time, the pompano can feast on coquinas. Juvenile pompano will even ‘surf’ up the beach into shallow water to capture them. In this scenario, coquina clams are both on the move and only briefly available, because the fish won’t dig for clams once they’ve burrowed. Foraging in schools also offers an advantage where little protection is available from predators, and pretty much anything that utilizes beach areas as feeding grounds will take a pompano.

In the Gulf of Mexico, young pompano start appearing in bays in early summer, with a smaller wave of individuals reported in August and September. The actual spawning location for pompano is unknown, but it is thought that spawning occurs offshore, where prevailing currents influence the transport and distribution of eggs and larvae. There are no documented accounts of spawning activity inshore, though recent studies indicate that there may be more inshore habitats conducive to spawning than previously thought. The season of love varies a bit among Atlantic and Gulf of Mexico populations. Those located in the tropical Gulf and Caribbean Sea may spawn throughout the year. Low-energy surf zones along beaches are the preferred nursery habitat. Juveniles leave the nursery when they reach three to five inches and can be found over sandy or muddy substrate in shallow bays or along piers and sand flats. Young pompano grow rapidly, up to twelve inches in their first year. Fifty percent of females reach sexual maturity by age one; all reach it by age three at approximately sixteen inches. Males reach sexual maturity around age one, or at fourteen inches. Females tend to grow faster and larger than males. Three to four years is the average lifespan, though individuals as old as seven have been caught.

Florida pompano are caught commercially in all states from Virginia through Texas, but Florida accounts for more than ninety percent of the total harvest. There are indications of overfishing and localized population declines off the Atlantic coast of Florida; beach replenishment in the Gulf of Mexico may cause fish to avoid those areas for several years; and mosquito control practices applied to shoreline habitats often kill the pompano’s preferred prey items (coquina and sand fleas). However, these are not currently considered to be major threats on the global level. They are therefore assessed as Least Concern by the IUCN Red List. Because they are a fast-growing, tasty fish, Florida pompano are recognized as having great potential for aquaculture. Research on culturing techniques and water recycling methods are underway. Being a member of the jack family, pompano have a semi-oily flesh that makes them a great candidate for the grill. Chefs like it because the fillets are of even thickness. The pompano’s diet yields a rich but mild flavor. Because of its high fat content, the white, opaque flesh works well with complex sauces. Be aware when buying this meat that there are several fish species in the Trachinotus genus marketed as “pompano.” The name has long been used synonymously for many different species within the jack family.

Luckily, Florida pompano are a great candidate to catch yourself! There are currently no regulations pertaining to pompano in Texas state waters, and because they fight hard, bite readily, and are found right along the beachfront (yet only require light tackle), pompano are also great targets for kids.

Fishing requires patience. Fishing with a child requires the patience of a saint. But the rewards are heavenly.”
~ @CastingCarter

Where I learned about Florida pompano, and you can too!