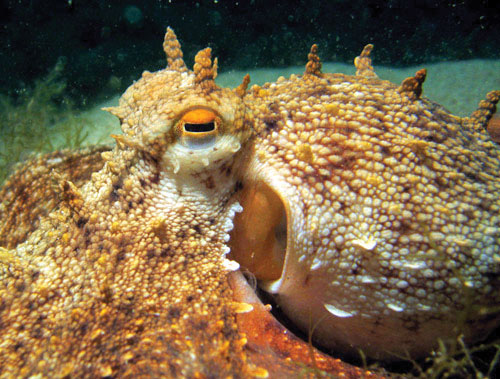 Photo credit: Mark Hesketh www.discoverscuba.g
In the Bahamas, legends tell of a giant half octopus, half shark creature known as the Lusca, that drags unsuspecting seafarers to the ocean bottom. Along the ancient Mediterranean Sea, many mythologies speak of Yamm, a malevolent sea god of many heads and legs.(1) Na Kita, a god of Kiribati (an island nation in the Pacific Ocean), is said to have used his many arms to push up the earth from the sea bottom to form the islands.(2) Kanaloa, the Hawaiian god of the ocean and underworld (who teaches magic and has the power to heal) also appears in the form of an octopus. (3) The Hawaiian creation myth, which tells that the present situation of life is only the most recent in a series, isolates the octopus as the lone survivor from an earlier universe.(4) Clearly, the octopus has been a creature of dread and awe through the ages. Though it's fun to view the octopus through a lens of myth and magic, it's really a fascinating creature all on its own.

Octopuses are mollusks, distantly related to clams and oysters, belonging to the class Cephalopoda. (Fun Fact: since it is derived from Greek, the correct plural form of octopus is octopuses or octopods; octopi is a popular version, though technically inaccurate as it uses a Latin plural suffix on a Greek word.) Cephalopds, which also include squid, cuttlefish, and the chambered nautilus, are characterized by having large heads, extremely well-developed eyes, and varying numbers of arms or tentacles (which, depending on the species, can be as few as eight or as many as one hundred). Cephalopod is derived from the Greek words kephalo and pod, literally "head foot." It's a pretty accurate description of the class.(5)

An octopus has two eyes, a bilaterally symmetrical body, eight arms, and no tentacles. Yes, arms and tentacles are, in fact, two distinct pieces of anatomy. A tentacle has a small group of suckers or hooks at the end (or it can be sucker-less) and functions like one of those poles you use to grab things way up high that you can't reach (imagine a flexible version). Arms, however, are suckered or hooked entirely from base to tip and can work independently from one another.(5)

It's thought that cephalopods originated more than 600 million years ago, and octopuses specifically started evolving more than 400 million years ago. Their ancestor had a shell, like any proper cephalopod, and looked snail-like. All the other modern cephalopods have some sort of inner or outer shell (even the squid, which has one inside its body). Octopuses are the only ones that evicted theirs completely somewhere in their evolution.(6) For this reason, fossil finds of octopuses are very rare. However, five complete fossils were published in 2009, and though they are 95 million years old, the specimens are almost identical to living species. This body plan evidently works really well.(7)

And that basic body plan is… mantle, head, arms. Inside the mantle, that squishy-looking but actually very muscular thing on the top of the octopus, are all the octopus's organs: two gills, digestive system, reproductive glands, siphon, and hearts, three in fact.(6) Why does it need three hearts? No, not because it's overflowing with compassion. The octopus's blood has the copper-containing protein, hemocyanin, for binding oxygen, which results in blue blood. (Human blood is red because its oxygen-binding protein, hemoglobin, contains iron.) Hemocyanin is inherently a poor carrier of oxygen (poorer than hemoglobin anyway), so the octopus's body copes by having those three hearts, two to pump oxygen-rich blood through the gills and one to pump it through the rest of the body.(6)

The head and arms are headquarters for a well-developed nervous system and complex sensory organs. Octopuses have wonderful eyesight and depth perception; their eyes are similar to ours, possessing an iris, pupil, lens, and retina. They also have a good sense of taste and excellent sense of touch (not to mention strength and flexibility in those arms). They are, however, deaf.

In addition to these most excellent physical characteristics, there's the octopus brain, which is proportionally as large as some mammals' brains. It's a unique flexible design with a complex visual cortex (useful since the octopus apparently coordinates the movements of its eight arms by sight). Octopuses are also beyond average invertebrate intelligence. On an EEG (a test that measures and records the electrical activity of your brain), almost all invertebrates tested register as static. But an octopus produces the kind of slow looping patterns generated by dogs and sometimes primates.(4) They can learn new tasks and recall later what they learned. I don't know about you, but that's something even I sometimes find challenging! Due to this high intelligence, the octopus (specifically the common octopus) is the only non-vertebrate animal protected by the Animals (Scientific-Procedures) Act, passed by the UK in 1986.

Octopuses are homebodies and loners. They spend much of their time holed up in dens (which could be under a rock, in a crevice, or even in an old bottle on the sea floor) or foraging for food. They only intentionally get together for mating. For reasons unknown, they tend to find new dens every couple weeks or so. Though octopuses can swim, they mostly get around by "walking." Their suckered arms make moving along the sea bottom an easy task. Plus, since each sucker has about 10,000 neurons, the octopus can learn a lot about its landscape, and it might even find lunch.(6)

Octopuses eat primarily crustaceans, gastropods, and bivalves, but they are opportunistic carnivores and won't pass by an easy meal. They typically spend 65% of their day foraging. Instead of teeth, an octopus has three main tools in its mouth: a hard beak (similar to a parrot's or squid's), a radula (a barbed tongue useful for scraping meat out of shells), and a salivary papilla (basically, a tooth-covered drill, though the radula can also have some drilling functions). Soft prey only require the beak. Clams and whatnot require the drill; once the drill penetrates the shell, it secretes a saliva that weakens the prey, allowing the shell to be pried open by the suckered arms. To catch prey in mid-swim, the octopus simply envelopes the prey in its net-like web of skin between its arms.(8)

Octopuses are also a good meal for other animals. Humans are top of the list, of course. In some areas of the world, octopus is an every day food. Seals find them fairly easy prey because they are fast swimmers and easily tire the octopus who can only swim fast for short distances. Large predatory fish, such as barracudas, and eels, which are thought to use a developed sense of smell to find hiding octopuses, also hunt them.(8) So how does the tasty octopus keep from becoming a barracuda's breakfast? In general, the octopus has three main defenses. First is camouflage. The octopus is the master of chromatophore control; it is unparalleled in mimicking the surface it is on to disappear. The brown octopus takes shape and color shifting to the extreme, even mimicking the predators of its predators (such as taking the form of a sea snake when approached by a predatory damselfish). Second is speed. By sucking water into its mantle and shooting it out the siphon, an octopus can jet along pretty quick. Of course, as previously mentioned, this only works with other sprinters and not so well with long distance swimmers. Third is ink. An octopus can eject ink and water simultaneously to create a black cloud. It can either shoot out several little clouds as distractions or one big mass for a quick escape. Plus, the ink contains an enzyme, tyrosinase, that impairs smell and taste, further confusing the predator.(6) In addition to these three main defenses, some octopuses have developed specialized techniques. Octopuses living near the shore have been observed using their siphons as squirt guns to scare away birds.(2) The male pillow octopus sometimes rips off the stinging tentacles of the Portuguese man-of-war and uses them as defensive whips. He can do this because he's immune to the venom (and really, what else are you going to do when you're less than an inch long?).(6)

As with most creatures, the octopus has a strong drive to further its species's population. Though a few species have showy mating rituals, for most octopuses, mating is a lackluster affair. The male octopus has a modified arm that holds rows of sperm. Depending on the species, he either deposits the sperm straight into the female's oviduct or simply tears off the entire arm and hands it over, wholesale. The latter is especially convenient for the male pillow octopus (remember that tiny guy?) because the female might be over six feet and one-hundred pounds. Just think if you had to date someone four times the size of the Statue of Liberty!(6)

Most octopuses die soon after their civic duty. It's thought that, like salmon, the octopus releases an endocrine secretion that triggers a genetically pre-programmed death. However, octopuses have a very short lifespan (most one or two years, the longest being about five years), so it's also possible that they simply die soon after reaching maturity, and therefore soon after mating, making it seem like mating is the culprit. There's much debate, and research is ongoing. Whatever the reason, males usually die a few months after transferring sperm. Females live long enough to protect their eggs until hatching, which depending on species and water temperature, can be anywhere from two to ten months. Once the baby octopuses hatch, they're on their own. Many start out plankton-sized, drifting at the surface and eventually settling to the sea floor. Some hatch larger, skip the drifting phase, and start out on the sea floor. Not much is known about their early lives except that they grow very rapidly. A young octopus can increase its weight by five percent every day.(6) Males reach sexual maturity before females, but that doesn't necessarily delay the tango. A female can store sperm in her oviduct until she is sexually mature. She can even keep the sperm of multiple partners and then choose which is best. It's the ultimate sexual selection.(8)

The only species found in Texas water is Octopus vulgaris, the common octopus. They live a year to a year and a half, can reach up to four feet in length, and are often some shade of brown. O. vulgaris is very abundant and the most studied species of octopus. It lives in tropical and temperate waters around the world, typically in near-shore areas. You might see it along jetties or shallow reefs, but despite their abundance, they're very elusive. Looking for a den is easier. They don't clean up after meals and often have piles of shells and debris, called middens, outside the den. Find the den; find the octopus… sometimes.(8) I wouldn't recommend a close approach, though. Like all wild animals, they can be unpredictable, and you might find out first hand just how Lusca legends began.