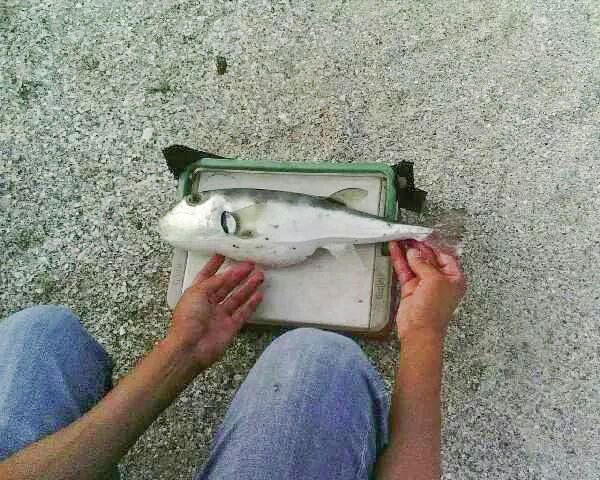 Diane Lynn Ramirez caught this smooth puffer at Oso Bay in Corpus Christi. Photo by Homer Ramirez III.
My sister had a puffer fish,
She caught it from the pier.
An oily, slimy puffer fish,
It lasted for a year.
And if you took it by surprise
Or frightened it or swore,
It puffed till it was twice the size
That it had been before.

Alas, one day the puffer fish
Completely disappeared.
Puss looked rather devilish
With whiskers oily-smeared.
And none of us believed our eyes
When suddenly we saw
Our puss puff up to twice the size
That she had been before.

Few fish are as endearing as the pufferfish, with its big expressive eyes and pouty little mouth, though many people might not recognize a puffer in its non-puffed state. They normally have the appearance of a large tadpole, with bulbous heads and tapered bodies. Some wear wild markings and bright colors, while others have a more drab look. The main feature shared by all pufferfish is the ability to ingest large amounts of water (or air, if necessary), dramatically increasing their body size and turning them into odd-looking ball-like creatures.

There are about 120 species of puffers worldwide. They are most prevalent in tropical and subtropical waters, relatively uncommon in temperate zones, and completely absent from cold waters. Most are marine, but some live in brackish and fresh water environments. The different species range in size from one inch long to over three feet! In fact, the smooth puffer, one of the species found off the Texas Gulf Coast, can reach just over three feet in length, though they usually top out at about two feet.

Here in Texas waters we have two species of puffer: the smooth puffer, Lagocephalus laevigatus, and the least puffer, Sphoeroides parvus. The smooth puffer has a grayish-greenish back and a white belly covered in tiny prickles. It differs from the least puffer in that it lacks small spines on the head and back... and that it's two feet long! The least puffer is averages about six inches in length. It has a brownish-goldish back and a white belly, also covered in tiny prickles.

Usually, the tail fin is primarily a rudder, but it can be used for a sudden evasive burst of speed, foregoing all the care and precision of the puffer's usual movements. Their excellent eyesight (they can even move their eyes independently), combined with this speed burst, is the first line of defense against predators. When that fails, the well-known inflation comes into play. An extremely elastic stomach allows puffers to suddenly double or triple their apparent size, and even if they are not visible when the puffer is deflated, most puffers have spines, so a hungry predator may suddenly find itself facing a poisonous, pointy ball rather than a slow, tasty fish. Oh yeah, did I mention poisonous?

Pufferfish are generally believed to be the second-most poisonous vertebrates in the world, after the golden poison frog. Certain internal organs, such as liver, and sometimes the skin, contain a neurotoxin called tetrodotoxin. To humans, tetrodotoxin is deadly, up to 1,200 times more poisonous than cyanide. There is enough toxin in one pufferfish to kill thirty adult humans, and there is no known antidote. The source of tetrodotoxin in puffers has been a matter of debate, but it is increasingly accepted that they synthesize their deadly toxin from a particular bacteria in their diet. Some predators, such as sharks and lizardfish, are immune to the poison and happily slurp down any puffer they come across. Other predators eat the puffer and just pray they don't die. That's us.

Pufferfish is actually a delicacy in some parts of the world. Chefs train for years to safely prepare this dangerous dish. Despite the care taken in preparation, some diners still experience temporary numbness in the tongue and lips. If they're unlucky, these symptoms are followed by headaches, nausea, vomiting, and paralysis of the face and extremities. If they're really unlucky, they'll experience acute paralysis, respiratory distress, convulsions, cardiac arrhythmia, speech impairment and finally, death. In a serious poisoning, death can occur within hours.

So why is this such an attractive dish? People pay oodles to dine on pufferfish! Well, it turns out that neurotoxins, though extremely deadly, get people pretty high, provided the doses are low enough. And humans are not the only animals to have discovered this. In a documentary by John Downer called Dolphins: Spy in the Pod, dolphins were caught on camera carefully chewing on the puffer and passing it between one another, like that craze a few years ago when people started licking toads to get a buzz. Even if Down hadn't had prior knowledge of pufferfish toxin, the dolphins' subsequent behavior was a dead giveaway. In addition to other strange behaviors, suddenly their own reflections on the water's surface were terribly fascinating. Zoologist and series producer Rob Pilley said that it was the first time dolphins had been filmed behaving this way, though Piley thought the dolphins' practiced, deliberate handling of the puffer implied that this was not their first trip.

Now, not all puffers are necessarily poisonous, and toxin level varies wildly even in fish that are. Also, Japanese fish farmers have grown nonpoisonous puffers by farming them in environments free of the bacteria that produce the poison. But as it turns out, consumers aren't quite as interested in the puffer without its narcotic side effects. I guess the only thing worse than a fish that can kill you, is a fish that can't.


Where I learned about puffers, and you can too!

Fish of the Gulf
www.rodnreel.com/gulffish/gulffish.asp?cmd=view&FishID=248