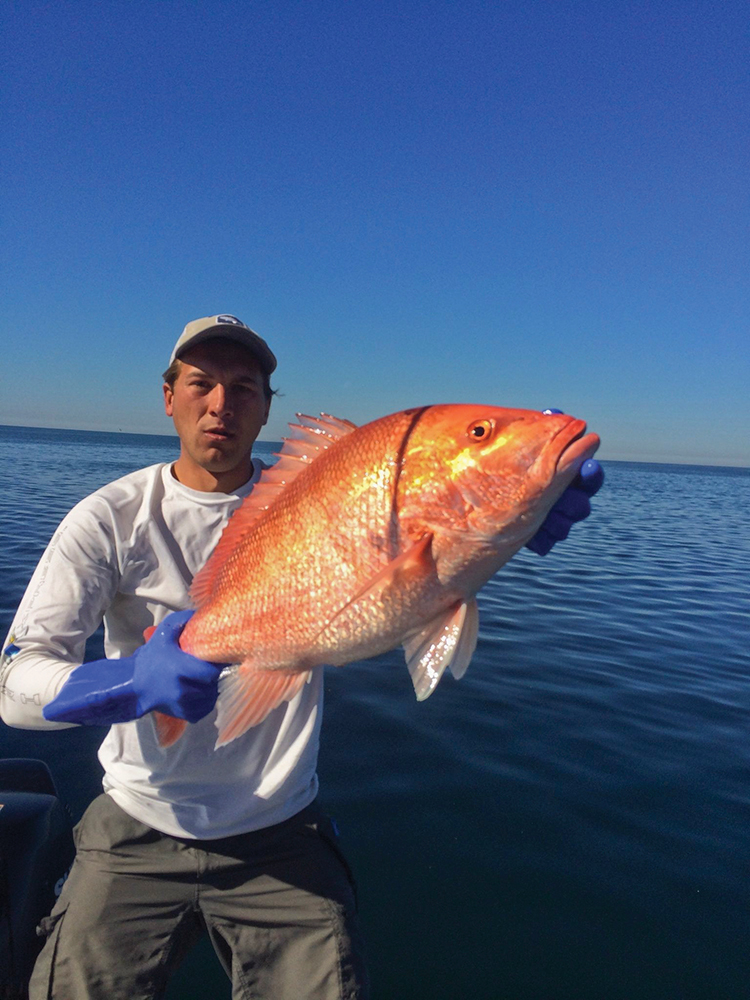 The preferred habitat of this species changes as they age. Juvenile red snapper are widely distributed over areas of open benthic habitat. Near one year of age, they migrate to intermediate-relief habitats, and then on to high-relief reefs the next year. Around artificial reefs, the fish are segregated by size, with the smallest spending time in the upper water column and the larger, more mature, fish in the deeper areas. Though they can be found in schools close to the ocean floor on rocky outcrops, ledges, artificial reefs, etc., at depths up to 620 feet, the larger fish typically don’t allow smaller individuals to share this territory.

Red snappers are a mix of active and ambush predator styles and eat just about anything smaller than them. The snapper group gets its common name from their ambush hunting style. The fish will wait motionless until prey comes within striking distance, then snap its jaws shut on the unsuspecting meal. The mouth is densely packed with short, sharp, needle-like teeth (called villiform teeth) and also features several canines – characteristic of all snappers, though red snappers have somewhat smaller upper canines than others like the mutton, dog, and mangrove – which are ideal for tearing smaller fish apart. Food habits vary by age and season. Juveniles consume mainly zooplankton. As they mature, their diet switches to larger prey, such as shrimp, squid, and octopus. Fish are always on the menu for adults, but crabs are most common in the spring, and mantis shrimps in the winter. They also have daily feeding patterns, preferring to hunt in the very early morning hours. In their preferred habitats, red snapper are one of the top predators, but adults are eaten by sharks, larger bony fish, and marine mammals, and juveniles are prey for a wide variety of creatures.

All snapper are oviparous, meaning they lay eggs to reproduce. Spawning in the Gulf of Mexico extends from April through September, with peak spawning occurring in June through August in our neck of the woods. Red snapper reproduce via broadcast spawning, meaning females and males release their eggs and sperm, respectively, simultaneously into the water column above the seafloor, typically in depths of 60-120 feet over flat sand bottom. This method decreases predation of fertilized eggs near the seafloor as the eggs are relatively quickly carried away by currents. Individual fish may spawn several times during a season, and females may produce over 9 million eggs during a single spawning event. Fertilized eggs float and hatch in roughly a day. Larvae are planktonic and float around for about a month before settling out of the water column. Young snapper can reach eight inches in their first year, then typically grow about four inches per year after that. Sexual maturity is reached between two and five years, between twelve and sixteen inches. However, they won’t reach full reproductive maturity until after ten years of age. Red snapper off the coast of Texas have been observed to reach maturity faster and at a smaller size than populations off the Louisiana and Alabama coasts. They can weigh up to fifty pounds and live up to fifty years.

Red snapper are one of the most sought-after offshore fish. They are caught recreationally from reefs, rigs, and banks along the entire Texas coast and are highly prized table fare. Though rare, there have been reports of ciguatera poisoning from consumption of red snapper. Ciguatera toxin is produced by dinoflagellates and concentrates in fish that ingest the dinoflagellates (or fish that eat the fish that have ingested the dinoflagellates, as would be the case with snapper). Possibly of more concern, genetic studies have shown that many fish sold as red snapper in the USA are not actually Lutjanus campechanus. In 2015, the Congressional Research Service (a legislative branch agency within the Library of Congress), reported that 77 percent of red snapper being served in the country was not red snapper at all – Pacific rockfish and tilapia being the most common counterfeits. Additionally, red snapper doesn’t retail for cheap, meaning that most diners around the country are shelling out big bucks for a fake.

Because they are such a popular menu item, red snapper conservation and regulation is highly contentious. Lutjanus campechanus is currently classified as Vulnerable by the IUCN Red List, due to the population being subjected to heavy exploitation by both recreational and commercial fisheries throughout its range. The shrimping industry has also had an impact on snapper populations due to by-catch of juveniles in shrimp trawls. This has been a source of conflict between shrimpers and snapper fisheries. The Gulf of Mexico Fishery Management Council implemented a Reef Fish Fishery Management Plan in 1984 to rebuild declining reef fish stocks, including red snapper. The red snapper portion of the program aims to restore the stock by 2032. The population is recovering rapidly, and anglers are seeing increasing numbers of red snapper. Anecdotal and stock assessment reports both indicate higher abundances of snapper, yet season lengths are repeatedly reduced. This has led to heated conflicts, particularly between recreational anglers and federal regulation setters. But here’s the explanation: the somewhat unpredictable recreational catch rates force managers to build in large buffers to prevent overfishing. Even so, the recreational quota has been greatly exceeded in eight of the last ten years. When that happens, fishery managers are supposed to subtract the overages from the next year’s quota, leading to shorter seasons in order to give the population a chance to rebound. And we’re behind in our ‘paybacks.’ Additionally, the extended federal season in 2017 (39 extra weekend and holiday days) has possibly delayed the red snapper’s target recovery up to six years, from 2032 to 2038.

The good news is you can help improve the season length and alleviate some of the controversy by providing much-needed recreational catch data. The Marine Recreational Information Program (MRIP) has made significant improvements to the recreational data reporting process, but there is still a need for timely in-season and real-time data collection. With more accurate data, those buffers created to reduce the risk of overfishing could be scaled down or even eliminated, resulting in more fish to be harvested and more days in the season. A good way (maybe the best way) to do this is to download the iSnapper mobile app. It works in combination with current MRIP data collection to provide rapid in-season (and out-of-season) catch information that would otherwise be impossible. In addition to catch statistics, iSnapper will generate data for parameters that are typically difficult to collect (like fish discard rates, depths fished, etc.) to optimize the fishery’s full potential. Citizen science apps like iSnapper – that can generate real-time, validated, and usable data – are a great tool for people wanting to preserve access to important fisheries, like the red snapper, for years to come.

Where I learned about red snapper, and you can too!