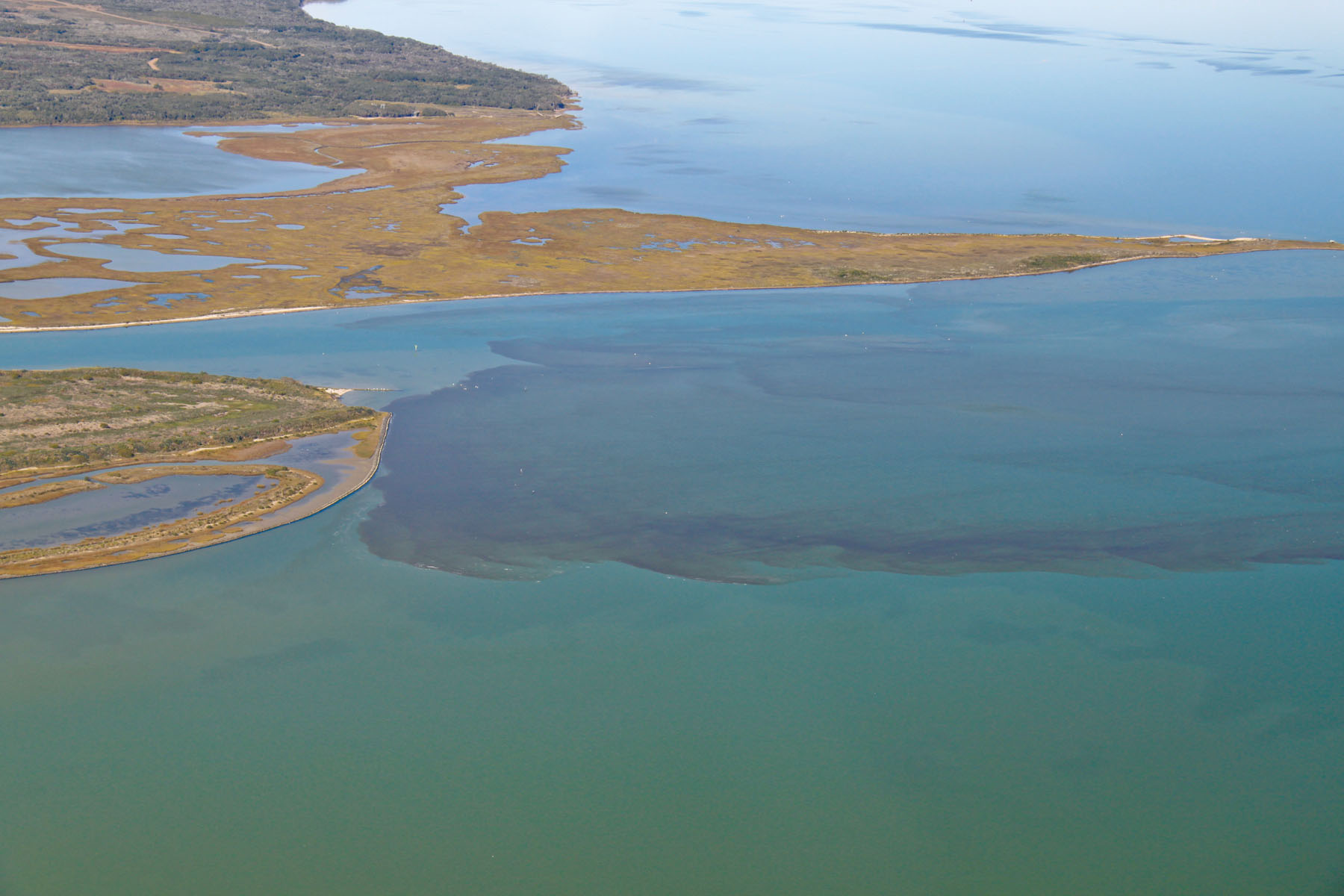 Red tide in San Antonio Bay. Photo by Alex Nuñez.
"He raised his staff in the presence of Pharaoh and his officials and struck the water of the Nile, and all the water was changed into blood. The fish in the Nile died, and the river smelled so bad that the Egyptians could not drink its water. Blood was everywhere in Egypt." ~Exodus 7

The Bible may well contain one of the earliest accounts of red tide, though the earliest official recording of the phenomenon in Texas wasn't until 1935, and even then the cause wasn't known. Scientists had to wait until 1947 for the that secret to reveal itself.

Red tide is a worldwide, natural occurrence not caused by humans. Somewhere near the base of the aquatic food chain lie microscopic, single-celled algae (dinoflagellates). Occasionally, algae multiply rapidly causing a "bloom" of visible patches of color in the water. Most species are harmless, but a few produce toxins. A "red tide" describes a bloom of toxic-producing algae that contain red pigment, though red tides can actually vary in color from yellow or brown to green or purple.(1) There are several species responsible for red tides around the world, but the algae in charge of red tides in the Gulf of Mexico is Karenia brevis.

K. brevis is a member of the Kingdom Protista. Like many other dinoflagellates, it is photosynthetic, mobile via two tails (flagella), and asexual. Being a photosynthetic organism, K. brevis provides energy and nutrition to larger predatory organisms, such as plankton, in a most time-honored fashion: lunch. Along with similar organisms, K. brevis is part of the backbone of the marine ecosystem, funneling significant amounts of energy into the food web.(2)

In general, K. brevis leads a pretty laid-back lifestyle, but from time to time, something peculiar comes over these, otherwise beneficial, relatives of pond scum. In a toxic Occupy the Coast movement, massive numbers of K. brevis join forces on the ocean floor and rise together in "harmful algal blooms" (HABs), blanketing everything in their path with highly potent neurotoxins called brevetoxins. (This occurrence otherwise known as… red tide.)(3) These toxins, which are released when the brevis cells are ruptured in rough water or through mechanical damage (i.e. being eaten by filter feeders), affect the central nervous system of fish, effectively paralyzing and consequently suffocating them.

It's just a bit curious that these plant-like organisms make a neurotoxin affecting mammals that don't share their environment or evolutionary history. It'd be kind of like oaks making a toxin that repels sharks. However, scientists have discovered several non-toxic algae with something like animal nerve cells. Because K. brevis competes with these algae for resources, it's possible it may have evolved specific poisons to target competitors, and the fact that the brevetoxins affect everything else is just an unlucky side effect…(4)

The exact conditions that trigger the mass murderer (or maybe just mass procreator) personality of K. brevis are unknown, but some scientists believe high temperatures combined with a lack of wind and rainfall are the main suspects. However, there's some new speculation in the scientific community that dust storms in Africa could actually be the culprit.(5) Regardless, it's pretty well agreed upon that this year's continued drought is creating a booming environmental niche for red tides, resulting in the largest algal bloom in more than a decade along the Texas coast.

Typically, red tides occur, intermittently or continuously, August through February on the Texas coast. There's really no predicting when or where the red tide will make an appearance since the blooms constantly change size and location in response to wind and tides. Plus, red tides are usually isolated patches, not beach-engulfing blankets. Though they can create seemingly apocalyptic fish kills, the Texas marine environment has experienced them before and recovered.(6)

From the first recorded red tide in Texas (1935) to the 1986 bloom, there was, on average, one red tide every decade. Since 1986, the blooms have become more frequent: four blooms in the 1990s and six in the 2000s. The most severe red tides occurred in 1986 and 1997, with estimations of over 20 million fish killed in each year. 2000 and 2009 also had their share of casualties, but only about one-tenth of what 1986/1997 experienced.(7) However, these estimations don't include the millions of dead, washed-up fish claimed by birds and other scavengers (who later regretted eating poisoned fish).

Red tides can be dangerous to humans as well. Though it's technically okay, according to the Texas Department of State Health Services, to eat fish, crabs, and shrimp during a red tide bloom (because the toxin is not absorbed into the edible portions of these animals), it's always advisable to NOT eat fish acting abnormally or appearing sick. It might not be red tide making the fish sick. Red tide does make shellfish, such as oysters, clams, and mussels, unsafe to eat. These filter feeders are not affected by the toxins but still store them in their tissues. If a human eats one of these filter feeders that has accumulated toxins, the person can become ill with neurotoxic shellfish poisoning (NSP). Even after red tide ends, the shellfish can be toxic for months, and the toxins are not affected by heat, so cooking the shellfish does not solve the problem. Shellfish you buy from restaurants or certified dealers should be safe because they are monitored by the Texas Department of State Health Services. Eye and throat irritation can also be caused when the brevetoxins are made airborne in rough surf, but these symptoms dissipate quickly if you just leave the immediate area (allergic reactions not included, of course).(6)

Several of these factors affect the coastal economies. The Texas oyster industry has already been hit hard by the drought, and then oyster harvesting was banned because of red tide before the season even officially began. In recent years, the worst of the bloom has been gone by Thanksgiving, but K. brevis is thriving in this year's warm, salty conditions. Cold weather and rain is the best bet to send it packing. Luckily, the recreational and commercial fish species aren't usually hit hard by red tides, so those industries shouldn't feel anything akin to the oyster industry. Tourism takes a hit, though. People are certainly reluctant to visit beaches hit by red tide.

So the economy takes a stumble, and the environment goes out of whack just a bit. But red tide is not terribly predictable, and certainly not stoppable. K. brevis is just one of those eccentric neighbors you have to live with. It's carved its niche, and it's sticking around.